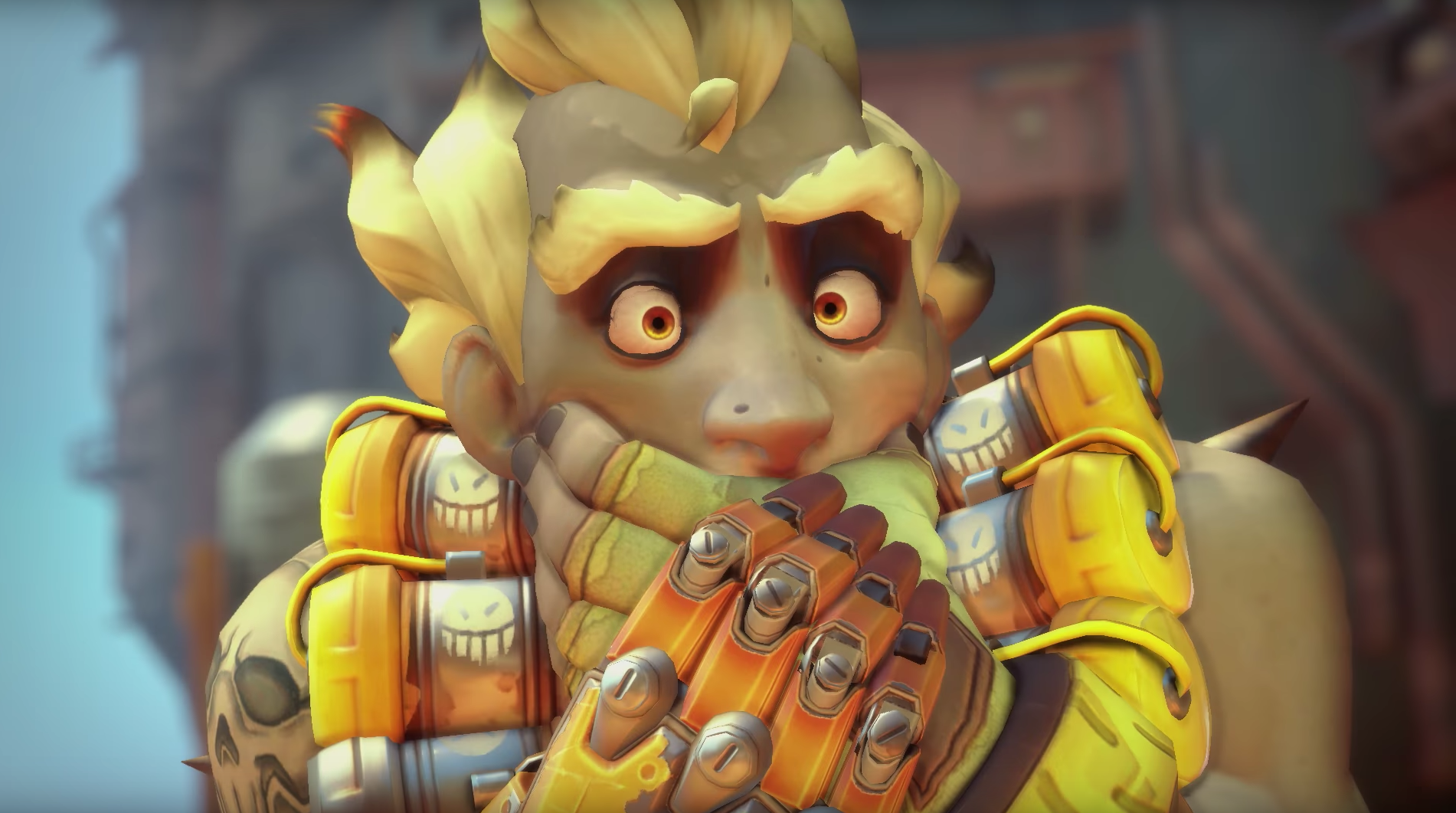 The worst feeling in a first-person shooter is having absolutely no idea why you died. Overwatch took that feeling, compressed it into a small Australian man, and armed it with grenades.

Every game against him turns Overwatch's impeccably-designed maps into booby-trapped dumpsters overflowing with exploding little Junkrat shits. As his teammate, you'll have an easier time coordinating with a dung beetle — at least until Junkrat does the thing with the exploding tire.

Junkrat's abilities include lobbing bouncing grandes across the map that explode when they hit you, dropping toothed traps, tossing concussion mines that send opponents into the air, and launching a tire bomb that remotely detonates. When you kill him, he offers a final middle finger as he farts out six grenade pellets that explode in his wake. Delete Junkrat. I say this every time one of his horrible grenades happens to fall into my path, or his abominable RIP-Tire wipes out my team with no warning.

Last month, Kotaku Pharah fanboy Nathan Grayson wrote an article titled "I Used To Hate Junkrat, Until I Tried Playing As Him." Grayson's argument is that Junkrat is fun, so if you hate him, you miss out on all that Junkrat fun.

Fun is fine when you're in Quick Play, Grayson, or playing random heroes in the Mystery Heroes mode. Fun is a jolly time when you're ranked in Bronze. You want to climb the ladder into Overwatch Nirvana? Time to get serious.

People complain that Overwatch's main healer Mercy is a no-skill hero. Nothing could be further from the truth. I can't tell you how many times my team has needed a healer, and a Junkrat player tells me that, actually, they can't play Mercy, or any other healer for that matter, because they need to play Junkrat.

Overwatch's only no-skill hero is not the one with a Ph.D, but the one whose only recourse for dealing with a challenge is to blow it up.

The beginning, middle and end of Junkrat strategy - and, yes, I have read guides on this - is to spew grenades everywhere and place your steel trap somewhere to protect the flank. If there's a shield, break it down, eventually.

Here's a line from one strategy guide: "Essentially, you should shoot your grenades anywhere where there are enemies." Here's another: "If you see a lot of enemies in front of you, simply lob a mine and detonate it quickly to deal a lot of damage."

Accuracy isn't really an issue. Neither are tactics. Junkrat gets lucky kills all the time. Really, the only thing you have to master is when to time your RIP-Tire ultimate ability.

This brings me to the absolute worst thing about Junkrat. Junkrat's RIP-Tire has no business being as fast, as powerful, and as sudden as it is. It can detonate faster than a second after Junkrat has announced it with a brief "Fire in the hole!" And it can take out an entire team.

It is one of the least avoidable ultimate abilities in Overwatch. Sure, you can shoot at the thing. Yeah, you can scatter your team or hide. But it will go on for 10 long seconds, searching for targets. Even killing Junkrat - who is immobilized while the tire lives - doesn't destroy the tire. What kind of bullshit is that.

Here's a question: If Junkrat can be so effective while requiring so little thought, why doesn't he get lots of pro play? Because his design is antagonistic to team coordination, that's why.

It's hard to target specific enemies like Tracer and Genji. It's hard to dive onto enemy backlines and stay alive. And it's hard to gang up with a buddy and take down the enemy healer. Pharah does lots of damage, too, and can break down shields, make tactical killing decisions, and freaking fly. That's probably why you see her more on the Overwatch League streams.