Monster Hunter: World’s New Monster Put Up One Hell Of A Fight

Recently I streamed Monster Hunter: World and teamed up with a group of loyal readers to hunt down the new monster Deviljho. Deviljho is a massive, pickle-looking monstrosity that’s able to body slam even the toughest of other monsters. A rainy battle against this slobbering beast became one of my favourite monster hunts yet.

The hunt started off quietly. I made my way through the Ancient Forest, stopping only to test out my new dual swords, which I’d forged from the fallen corpse of another Deviljho. A heavy rain beat down as I worked through the dark forest pathways to to join my teammates and find the beast. Deviljho stood high above us on a rocky plateau, leaping from one rocky outcropping to another.

I’d never seen a Deviljho jump like that before and wondered if this monster would prove more tenacious than its brethren. We followed the monster into an open field where its massive roar send a herd of docile Aptonoth scattering. The fight was on — the Deviljho, multi-toothed jaw dripping with slobber, rushed at us at a breakneck pace.

I consider myself a decent enough hunter, my dual sword techniques hovering between average and advanced. I understand the fundamentals: build my Demon Meter by entering a special attack mode, use difficult combo skills when the monster is stationary, drop into another stance when my meter is full to use slightly different combos.

There’s a welcome rhythm to dual sword hunter, one which only increased in ferocity since a new patch allowed more attacks to increase my Demon Meter. My own assault became a harried mix of powerful flurries and mistimed spin attacks that went wide. All the while, the Deviljho roared and whipped its tail, knocking me back at the worst times. This hunt would be trickier than the others.

In spite of the monster’s notable fierceness, my fellow hunters and I managed a few important moments. A pitfall trap dropped the Deviljho into the ground and immobilized it for easy attacks. The angry monster puffed out its cheeks to impotently spew forth magical fog in an effort to drive us off.

When it ran towards a sloped ridge, I was able to slide down and perform powerful spin attacks that allowed me to rush down the beast’s spine for a series of painful slices. For each disorienting roar or dangerous dragon breath, we were able to respond with our own coordinated attacks. 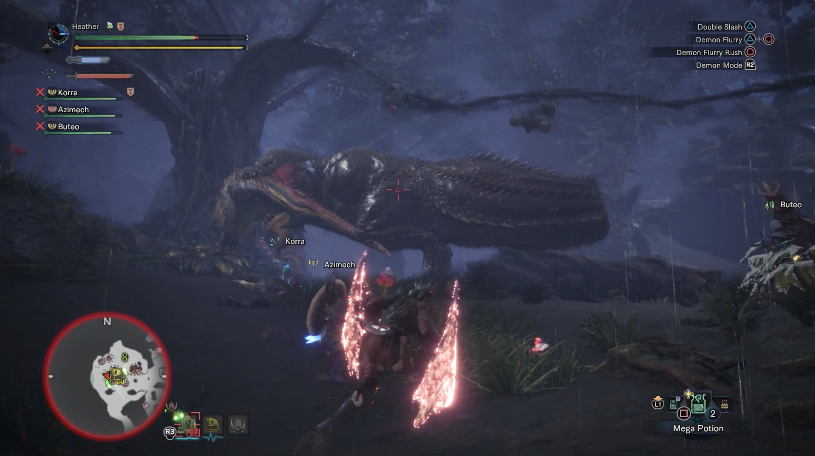 That Jagras never stood a chance.

Even with all of this, the Deviljho wasn’t ready to give up. The fight became a wearying slog of broken body parts and bloody sword slashes. The tide only turned when another monster, a giant Bazelgeuse, descended into the fray. Bazelgeuse are a kind of massive flying wyvern with huge scales that can explode at will. As it zipped down, the Deviljho roared in challenge and we all scattered to avoid the fight.

The noise attracted a Great Jagras, a sort of bloated iguana, that slipped into the battle as well. The Bazelgeuse flew off and the Deviljho turned its focus to the newest monster, grabbing it in its jaws to use as a makeshift cudgel against us. We attacked until the Deviljho staggered, cutting off its tail in the process. It was enough to get the beast to retreat.

The Deviljho scrambled up into the forest, resting beneath some vines. I dropped a shock trap that zapped it, stunning it long enough for my teammates to use tranquilizer bombs to knock it out. We’d captured one of the game’s most dangerous monsters and survived a truly harrowing hunt.