Seriously Though, Maybe Get A Switch Stand I’ve had my Nintendo Switch for a little over a year now, but I only just bought a stand for it last week. I shouldn’t have waited so long.

I spend about half of my Switch time playing docked, and the other half in handheld mode. Before last week, when I was in handheld mode, I would play like most people: I’d pick the thing up and play it. I wouldn’t detach the Joy-Con controllers, and I only rarely would combine the Joy-Con onto the grip to form a standard controller.

I’m going to be travelling over the next couple of weeks, first to Austin to do a live Kotaku Splitscreen podcast at South by Southwest, then to San Francisco to cover the Game Developers Conference. On a whim, I decided to order a Hori Switch stand before setting out. I had a hunch I might be glad I had ordered it, and my hunch proved correct.

The Hori stand is pretty inexpensive ($US13 ($17)), and there are a ton of third-party stands like it if you want one with a different design or more features.

It lets you prop up your Switch while charging it, which compensates for one of the system’s most glaring design flaws: the fact that it can’t stand on its own with a power cord coming out of the bottom. The stand folds up and is pretty easy to store in a backpack. It seems fairly cheaply made, and it will probably break at some point in the next few years, but I bet I’ll get my thirteen bucks’ worth of utility out of it before that happens.

Since I got the stand last weekend, I’ve been using it way more than I even thought I would.

I put it on the desk in my hotel room, of course. I stood it up on my tray table on my flight to Austin. On my flight, the stand also doubled as a stand for my Phone when I took a break from games to watch a movie I’d downloaded.

I also have been using it in bed, balancing the stand on my stomach as I recline and play Zelda or whatever. (That pose is slightly awkward, since the stand will sometimes collapse, but works better than I would have thought, and is easier than travelling with one of these.) 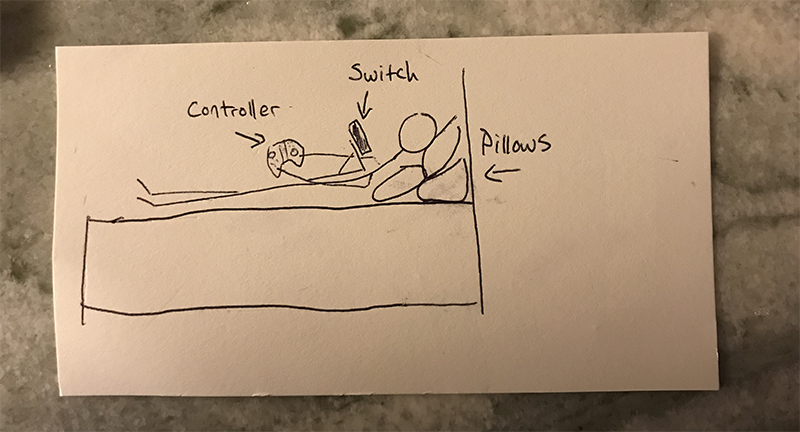 As much as I’d grown used to playing the Switch in regular handheld mode, I find that I prefer to play most games with the Joy-Con mounted to a grip. My hands sit on the sticks more comfortably, and while the mounted Joy-Con don’t work as well as the Pro Controller, they feel less awkward in my hands than when they’re on the side of the Switch.

It’s also unexpectedly nice not to have to hold up the extra weight of the Switch itself. Fast-paced games like Bayonetta 2 and Mario Kart are significantly easier to play. RPGs like Skyrim and Breath of the Wild feel more comfortable too. It’s also a cinch to play Resident Evil Revelations and Splatoon 2 with split Joy-Con motion controls.

This isn’t a complicated article. My thoughts on this subject aren’t all that nuanced. I bought a stand for my Switch and I like it a lot. Given how cheap these things are and how many options are out there, I recommend getting a stand for your Switch. You might be surprised by how much you like it.