Star Wars Rebels came to an end this week, tying up the story of the Ghost crew while also giving us a glimpse at their futures. One moment in particular had Rebels fans playing matchmaker for two members of the team – and while executive producer Dave Filoni wouldn’t give us a concrete answer about them, he was happy that it was being interpreted as such.

Over the course of Rebels‘ four seasons, Zeb Orrelios and former Imperial Agent Kallus’ relationship together has evolved from mortal enemies – both men believed that Kallus was complicit in the genocide of Zeb’s people, the Lasat – to begrudgingly accepting foes, and eventually to close friends, as Kallus grew increasingly dismayed with the cruelty of the Empire and jumped ship to the Rebel Alliance. Their friendship became one as important to the show as Ezra and Sabine’s, or Kanan and Hera’s, which naturally meant that fans have been shipping the hell out of them for a while at this point. 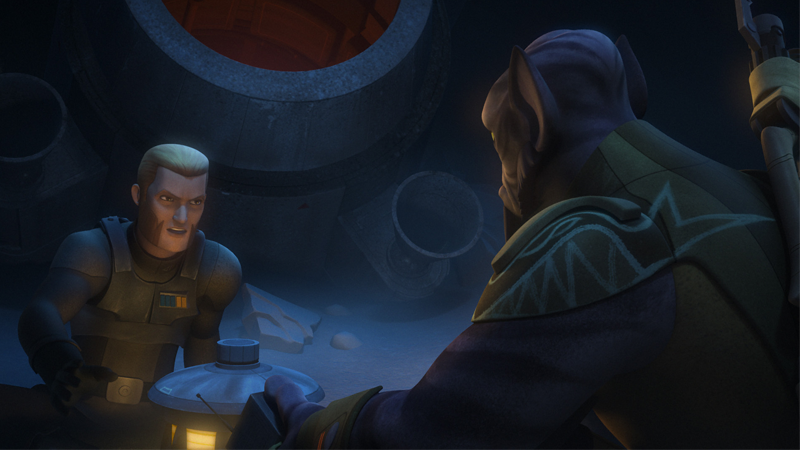 Kallus and Zeb, begrudgingly forced to work together after they both crash land on an ice world in the season 2 episode ‘The Honorable Ones.’ Image: Star Wars Rebels (Lucasfilm/Disney XD)

But “Family Reunion – and Farewell,” the final episode of the series, concluded with something that left it very open to the implication that Zeb and Kallus’ relationship had evolved into something more romantic by the time of the post-Return of the Jedi-era the epilogue was set in.

In a brief moment, Sabine tells the audience about how Zeb took Kallus to Lira San, the secret hidden homeworld of the Lasat Zeb first discovered back in the season two episode “Legends of the Lasat.” Zeb gently covers Kallus’ eyes with his hand before revealing the planet, before putting his arm around Kallus and introducing him to some of the surviving Lasat. Sabine even tells us that Kallus is now free to be among the Lasat, as if he was one of them.

There’s nothing explicit about the two being a couple, but given the tenderness of the whole thing – you don’t just invite a best bro to your secret homeworld and reveal he wasn’t party to genocide, if you know what I’m saying – it’s definitely had some fans wondering if, in a subtle way, Rebels had given Star Wars its first on-screen LGBTQ couple.

io9 had the chance to speak to executive producer Dave Filoni in the wake of Rebels‘ end, so we asked him about Zeb and Kallus’ relationship over the course of the series, and if there’s anything to the interpretation of their final scene together as a romantic one:

I put everything up on screen and then you let the audience react to that. I think that they’re just two characters, even on very base level, they’re two men who care about each other and love each other. And instead of embracing a path of anger and destruction, and looking at where each of them came from and seeing their differences they try, and through the adventure and through peril, they find a common ground and they choose the path of forgiveness. They choose a path of, “it’s better to see something good in somebody else than to live in fear.” Because that’s what you do when you’re destructive. It’s because you’re afraid when you’re trying to destroy each other, It’s cause you don’t understand each other. And I think that’s at the core of it.

I don’t want to take anything away from people that want to believe, what they believe as far as how close two characters are. I mean I think that’s completely open and I appreciate all the interpretations of it. As a creator you’re always interested in how the work interacts with the audience and what they feedback to you about it.

I also think growing up over the years as a young man there’s kind of a deficit, especially in America, of expressing ourselves as men and about caring and loving and what even that means. We’re always told to toughen up and I understand that. But at the same time it can be troubling when there’s this deficit of compassion extended to one another and different things so I think the story worked out. I think that whatever people think of it they understand that they chose a path to be more selfless and caring for one another. That’s very important. And they seem to like that outcome.

Some people, I think, earlier on were like “how could he ever forgive Kallus for what happened?” But you kind of have to go, “Exactly. How can he and what does that mean?” Isn’t that amazing if he can? Does the outcome have to be those two characters would destroy each other? Or is it more compelling that they find this ground together and start this new life, what does that mean? So I think that’s the more interesting, encouraging ending, frankly.

So don’t go screaming from the rooftops just yet that Star Wars has finally started introducing some LGBTQ characters to the galaxy far, far away beyond the tie-in books – it, like so many other blockbuster franchises, has a long way to go in this regard. But be it bromance or romance, it’s nice to hear from Filoni, who steered Rebels from its earliest days to its final end this week, that he’s willing to leave that interpretation to fans rather than strictly deny it — and champion the intimacy and compassion between the two men, instead of having them forever remain bitter foes.

Who knows, maybe we could revisit Zeb and Kallus on Lira San in Star Wars‘ future? Time will tell – Rebels final episode did leave us with quite a few questions we want following up on, after all.