Sure, It's Made Of The Corpses Of Your Victims. But Is It Art? 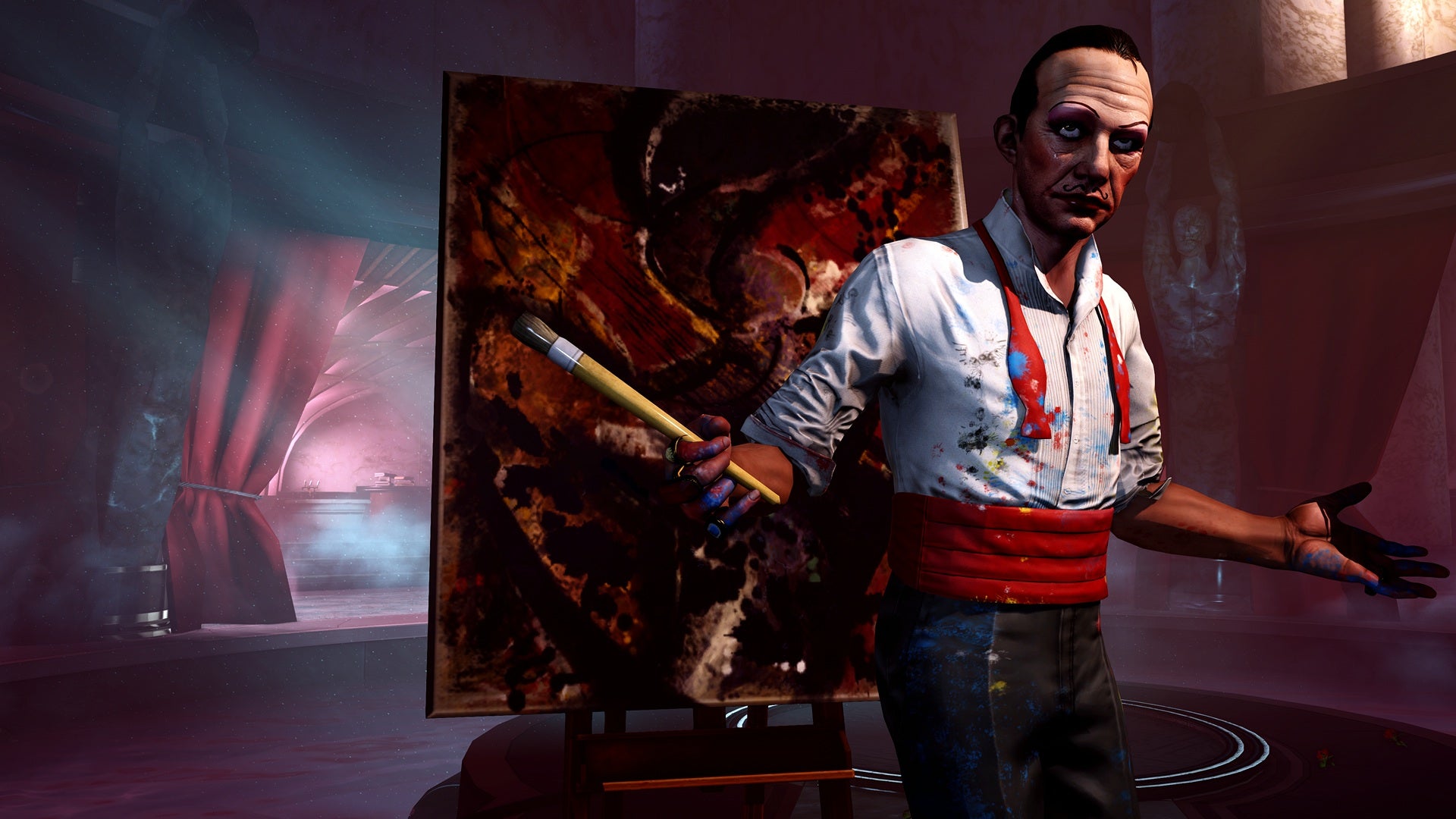 One of the most enduring character archetypes, one that adds a zesty burst of horror to any game, is the psychotic artist. You know the type: the dapper, urbane, well-spoken aesthete who values art above life and moans about critics who simply don't understand their brilliant work. No one truly appreciates their genius, therefore they must work outside the boundaries of law and morality that restrain lesser beings such as you and I.

Often, they promise to make us central to their next project, which will be their "masterpiece". Unfortunately, their preferred medium is cadavers, and you're looking pretty alive right now. We all know murder is wrong, but can we separate the art from the artist to judge the work and not the man? Innocent people dying for art is terrible, sure, totally on board with that.

But is the art any good? Let's review the works of gaming's most notorious mad artists. 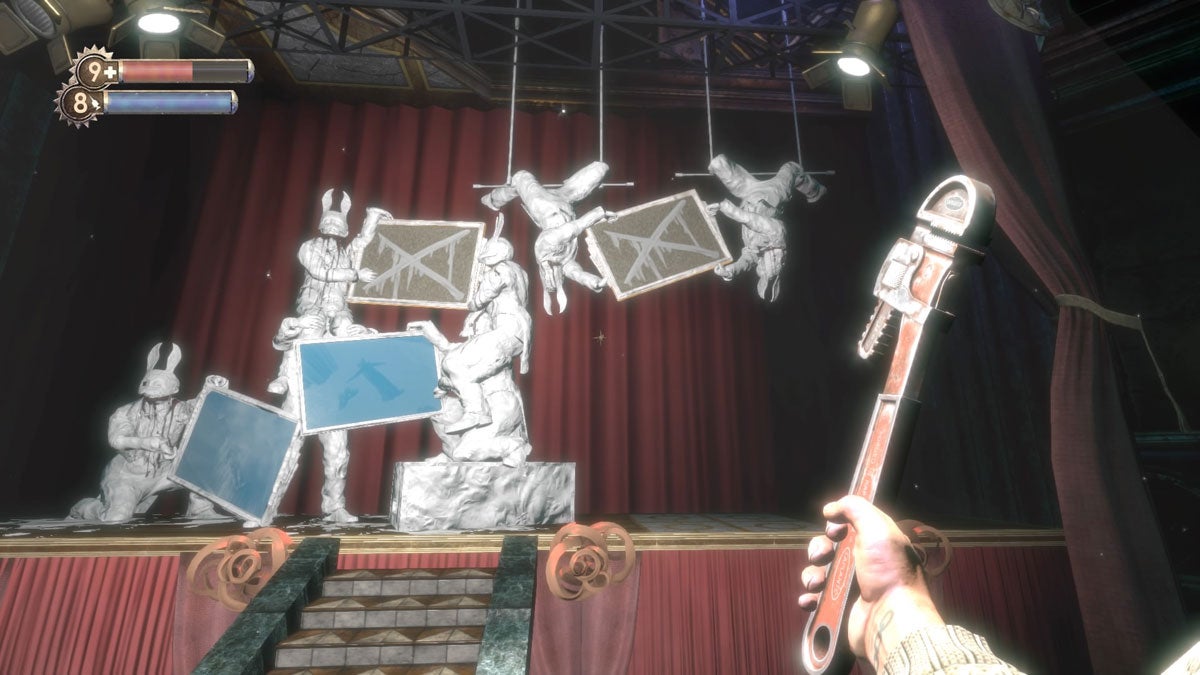 From the "Sander Cohen for Pier 1 Imports" collection.Screenshot: 2K Games

Cohen earned renown on Broadway as a composer and playwright, but after his arrival in the underwater city Rapture, he also dabbles in poetry and sculpture, by which I mean he covers dead bodies in plaster. Before he allows you to leave Fort Frolic and continue your hunt for Andrew Ryan, Cohen demands that you help him finish his greatest work, the Quadtych. You're to murder his former disciples, photograph their dead bodies, and place the photos in frames held aloft by more dead bodies — uh, "sculptures."

It's surprising that a control freak like Cohen would leave so much of the piece up to the player. What if I have no artistic sensibilities, no sense of composition or lighting? The Quadtych could have been an interesting examination of Outsider art versus professional art, but it's not intended to be such. It's simply meant to be "genius," and we're the unnamed collaborator.

While the piece does have an arc that draws in the viewer's eye and gives it a nice sense of movement, the photographs render it little more than an extravagant picture frame. While Cohen thinks this piece will be a lasting testament to his genius, it's basically just something you might find on a particularly large shelf at Target come Halloween season. 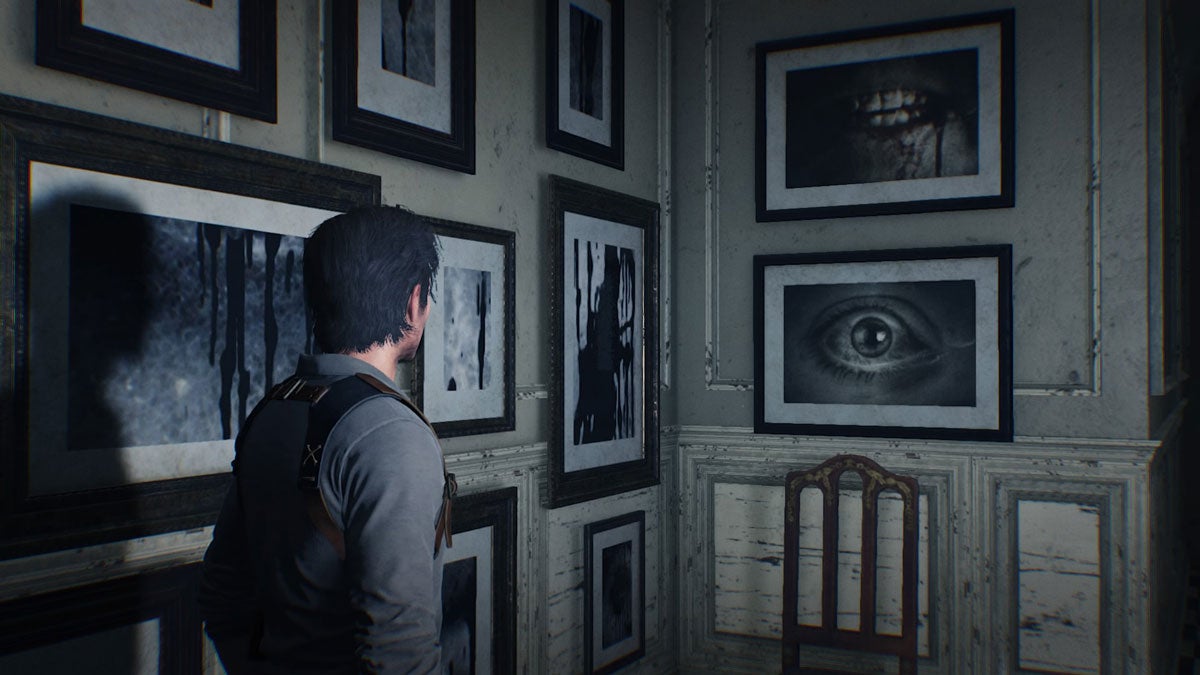 The Artist: Stefano Valentini, The Evil Within 2

Valentini is one of the prime evils encountered within Evil Within 2. He's a psychotic former war photographer who began murdering fashion models while capturing their moments of death on film. He "realised the beauty in destruction," you see, but "philistines and fools" don't appreciate his work. He retreats to the virtual STEM world and treats the alternate reality like his personal playground, murdering folks and snapping pics with abandon.

We do come across some repulsively neat tableaux as we explore the virtual town of Union: bodies and geysers of blood frozen in time before Valentini's cameras. Not an installation I'd want in my living room, certainly, but they're definitely eye-catching. 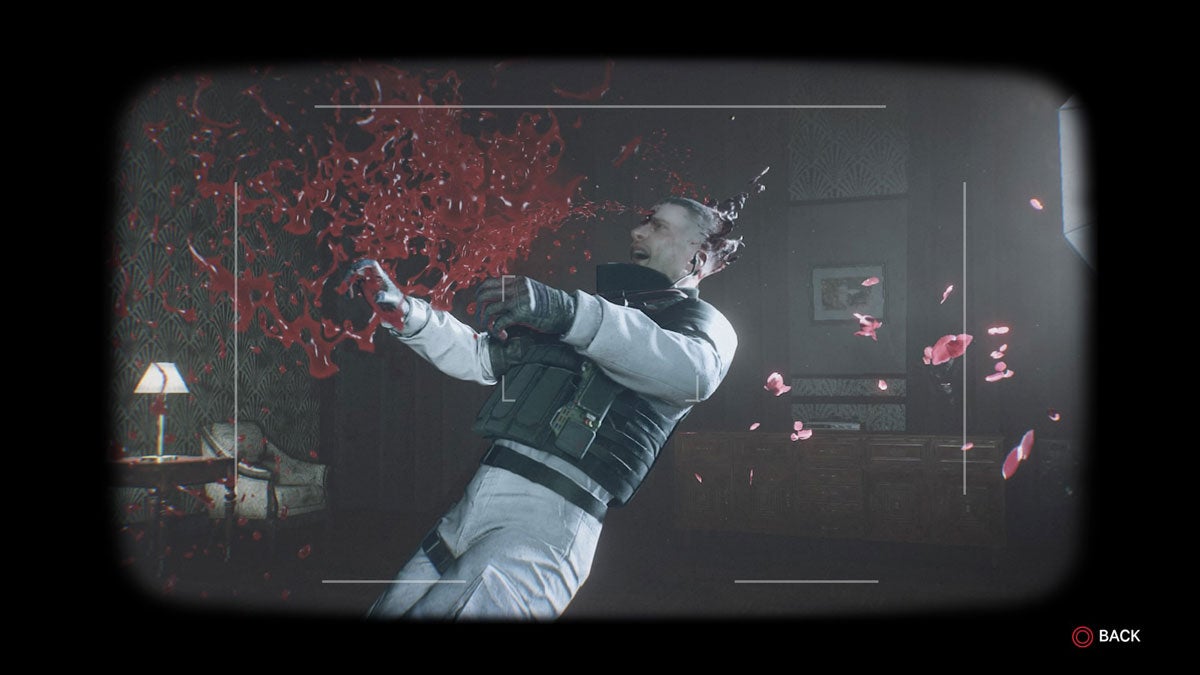 Valentini completely fails to capture the dynamism of his subjects in his photographs. Instead, he focuses on close-ups of body parts, rendering the elaborate murder staging pointless. I suppose he intends these eyes, mouths, and blood spatters to be morbid and macabre, but instead they're completely banal, akin to something produced by a first-year art student who got inspired after watching Un Chien Andalou late one night on YouTube. 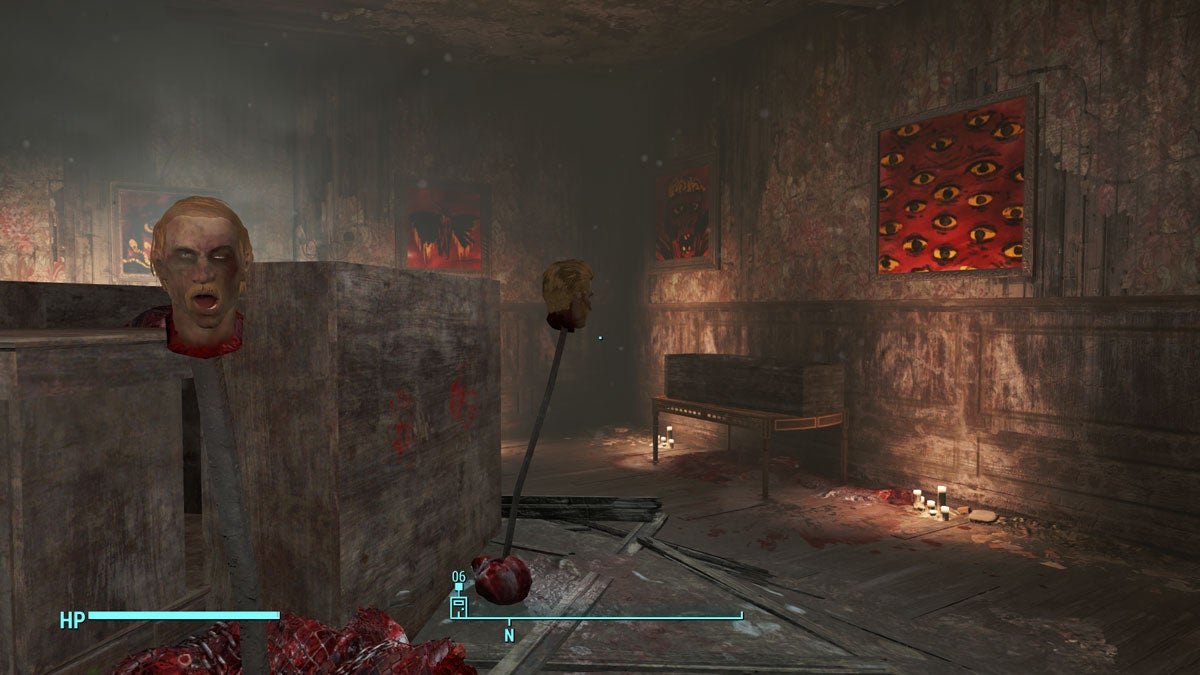 Don't eat the cheese at this gallery opening.Screenshot: Bethesda Softworks

The quintessential "gentleman psycho," Pickman revels in murder and art whilst maintaining a polite, measured demeanour and wearing the nicest suit one could find after a nuclear apocalypse. He fills his eponymous gallery with paintings and sculptures made from the blood and body parts of raiders and trespassers.

Pickman's sculptures are a bit lacking in substance — they're little more than raider-kebabs, really — but his paintings are interesting. They're energetic and eye-catching, often with bright yellow creating a real pop of contrast in seas of red. When the pieces are taken in as a whole, they're a lively exploration of a theme, namely, "I'm a homicidal maniac!" On the downside, as they're made with blood, viscera, and rotting body parts, his works are incredibly unhygienic and you know they must smell something awful. Collectors beware. 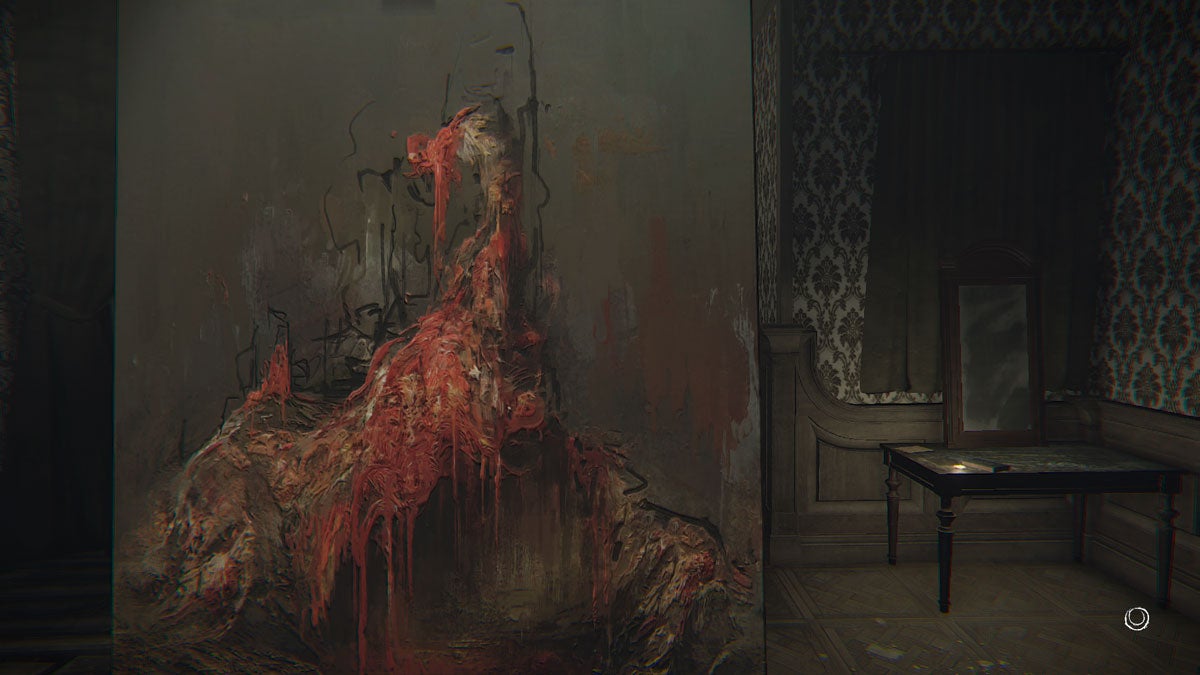 "Portrait of the Artist as a Young Flesh Pile"Screenshot: Aspyr Media

This time, you get to be the mad artist, a schizophrenic alcoholic who uses body parts of his dead wife to create his "Magnum Opus." It's a tale more depressing than it is frightening as we relive memories that show how horrible we have been to our loved ones and how our genius has deteriorated into psychosis.

The Victorian mansion you inhabit and explore is crammed full of art, and the subject matter becomes more disturbing as you become increasingly unhinged. Figure studies found throughout the mansion are evocative, delicate, and gorgeous, proving that you've got real talent under all that madness. Illustrations deemed too violent for children's books would be right at home in modern, adult-oriented editions of fairy tales. 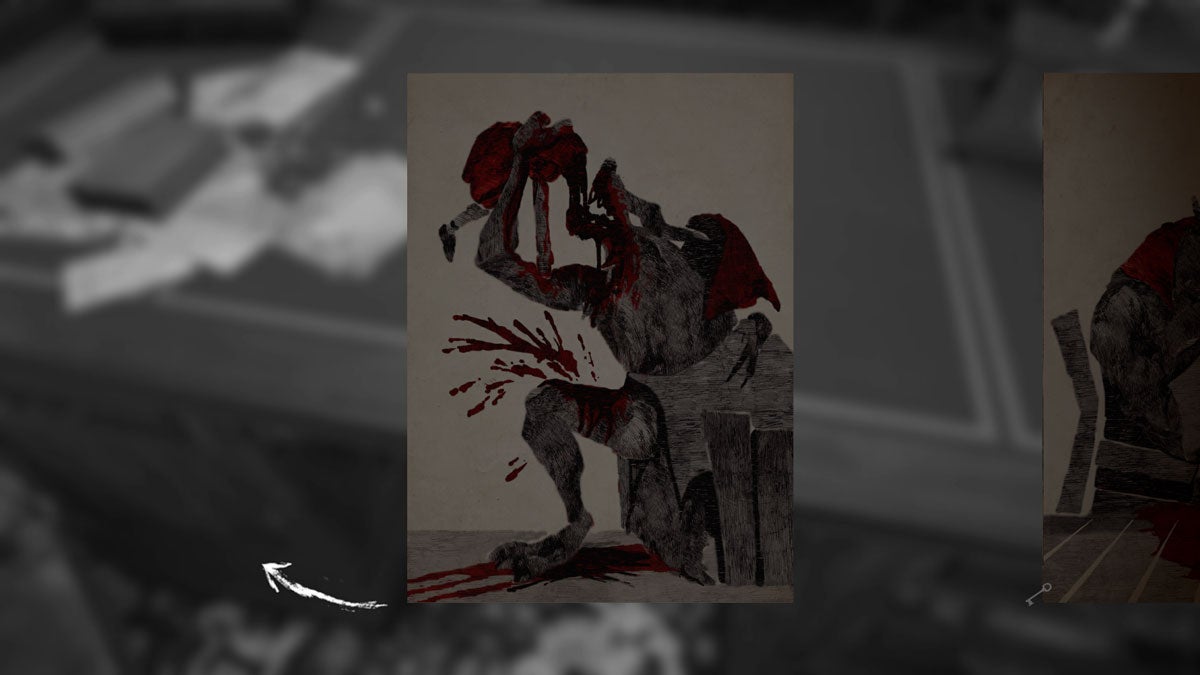 The Magnum Opus itself is strangely compelling, its muted colour palette contradicting the intense emotion. And like all psychotic video game art, of course, it's gross.

These mad mavericks talk a big game and they love to play the misunderstood genius, but judging by the work, methinks they most often overestimate their own talent. In fact, it's entirely likely that the art is simply an excuse for these psychos to get their murder on.

After all, Sander Cohen could have used chickenwire armatures rather than bodies under all that plaster. And Pickman and the Unnamed Protagonist could have painted with, you know, paint and probably gotten much nicer results. There's probably a reason Bob Ross didn't have the blood of innocents on his palette.

The murders themselves weren't actually integral to the work, and even more tragic, most of the work is really bad. I think the wife in Layers of Fear said it best: "This whole 'tortured artist' nonsense has got to stop!"