Surviving Mars Is Tempting Me To Build The Perfect Martian Colony

I’m using Paradox’s new space colony sim Surviving Mars to see what would happen if I tried to establish a Mars colony full of people like me. First, though, I need to make sure they have a worthwhile colony to live in. That part’s been tricky.

This is not my colony, obviously.

Though it’s a game about living in space, Surviving Mars has a lot of ties to Earth. You can phone home for materials and pre-fab buildings, as well as people. Colonists’ stats are surprisingly robust; they have perks, quirks, jobs, and a host of other factors that will determine the fate of your colony. You choose from a pool of applicants by selecting thumbs up or thumbs down on certain traits and this will influence what buildings your colonists want, how fast they will do certain jobs and how quickly they will start to reproduce.

For my first rocket, I tried to get people who were most similar to me. I gave the thumbs up to characters whose sex was “other,” the closest Surviving Mars gets to having trans people. I prioritised religious colonists (a morale boost) and ones with the “saint” trait, meaning they’d boost the morale of other religious people. (I used to be a prison chaplain, so this seemed pretty apt.)

I picked people with a penchant for drinking (I was a chaplain with the Jesuits, so we’re still in line) and games, for obvious reasons. I made a few gamblers, after my childhood talent for betting on horses and dogs. You won’t only get colonists with these traits, but they will be bumped to the head of the list. And then I watched in delight as my rocket full of nerdy trans boozehound faithful set off from Earth toward Mars. 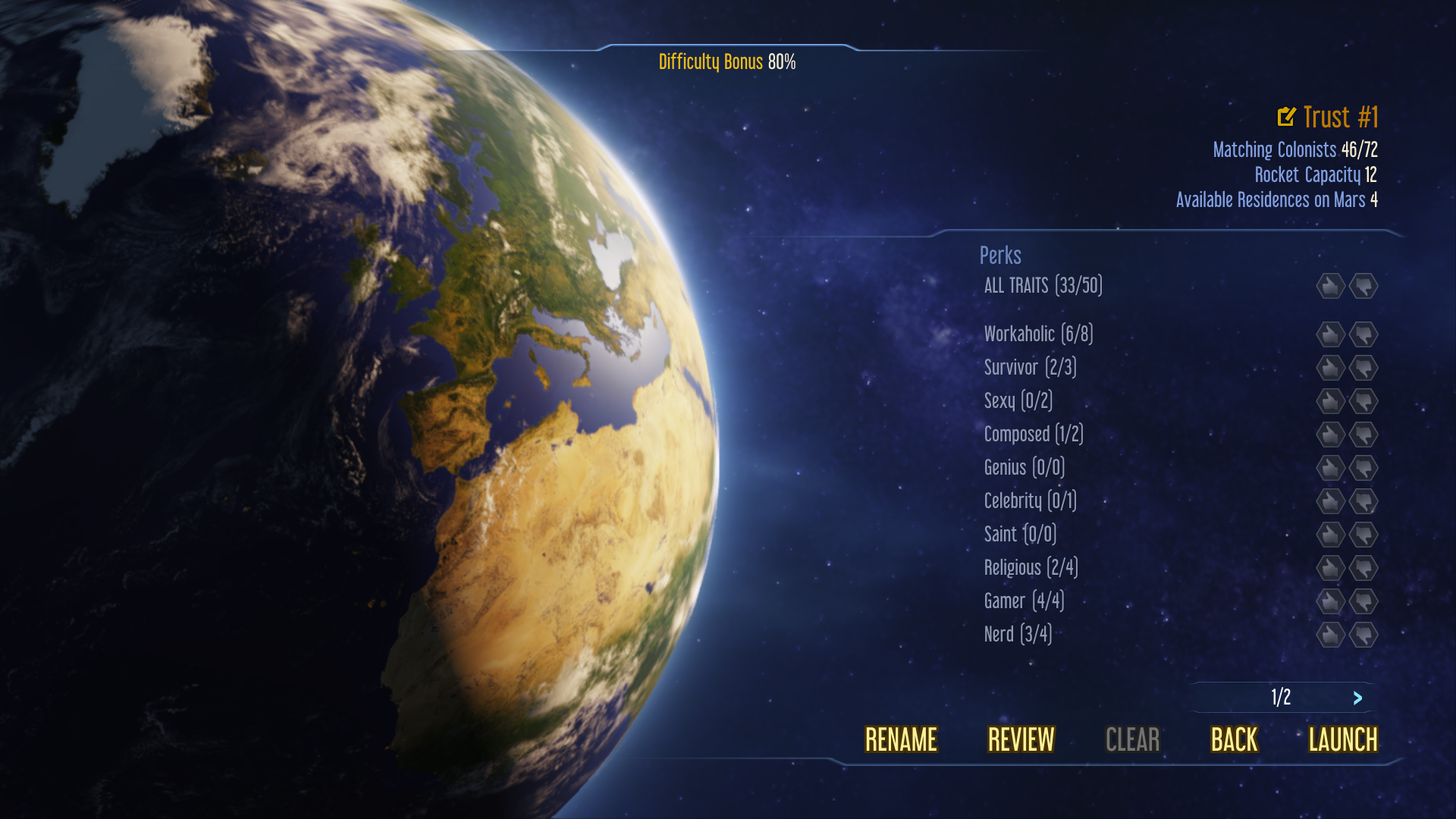 Some of the game’s perks

I dreamed about what would happen. Could they start a cult? Would they drink and gamble Mars into ruin? Could they reproduce? I was excited to see how robust and flexible the human side of the simulation could be, to imagine what a bunch of people like me could do in the game.

Rockets take a while to get to Mars. You build a city for them using drones before they arrive. As I waited, I looked over what I had constructed. Like Cities: Skylines, Surviving Mars mixes architectural needs with human ones. It can be a tough balance. In Skylines, I often wished my people would stop complaining over the in-game Twitter so I could focus on crafting aesthetically-pleasing streets and roundabouts.

Other times I wished I could ignore the building in favour of following my citizens’ daily lives. Balancing the human and the city can be almost two separate games, ones that don’t always play nice together. In Skylines, to meet my financial needs, I sometimes raise property taxes or deprioritize services to certain areas, creating socioeconomic disparities that would horrify me in real life, in favour of making the nicest-looking or most fun city I can.

People in city-building games can be fun, but other times they just get in the way.

As I dreamed about the adventures my people would get up to in Surviving Mars, I noticed my pipes and cables of their Martian outpost didn’t run neatly. I wanted my solar panels to line up better and be further from extractors so they wouldn’t get covered in dust. The buildings in the dome were placed haphazardly, plunked down as I learned the game. My hopeful colony suddenly looked like a messy jumble of toys. 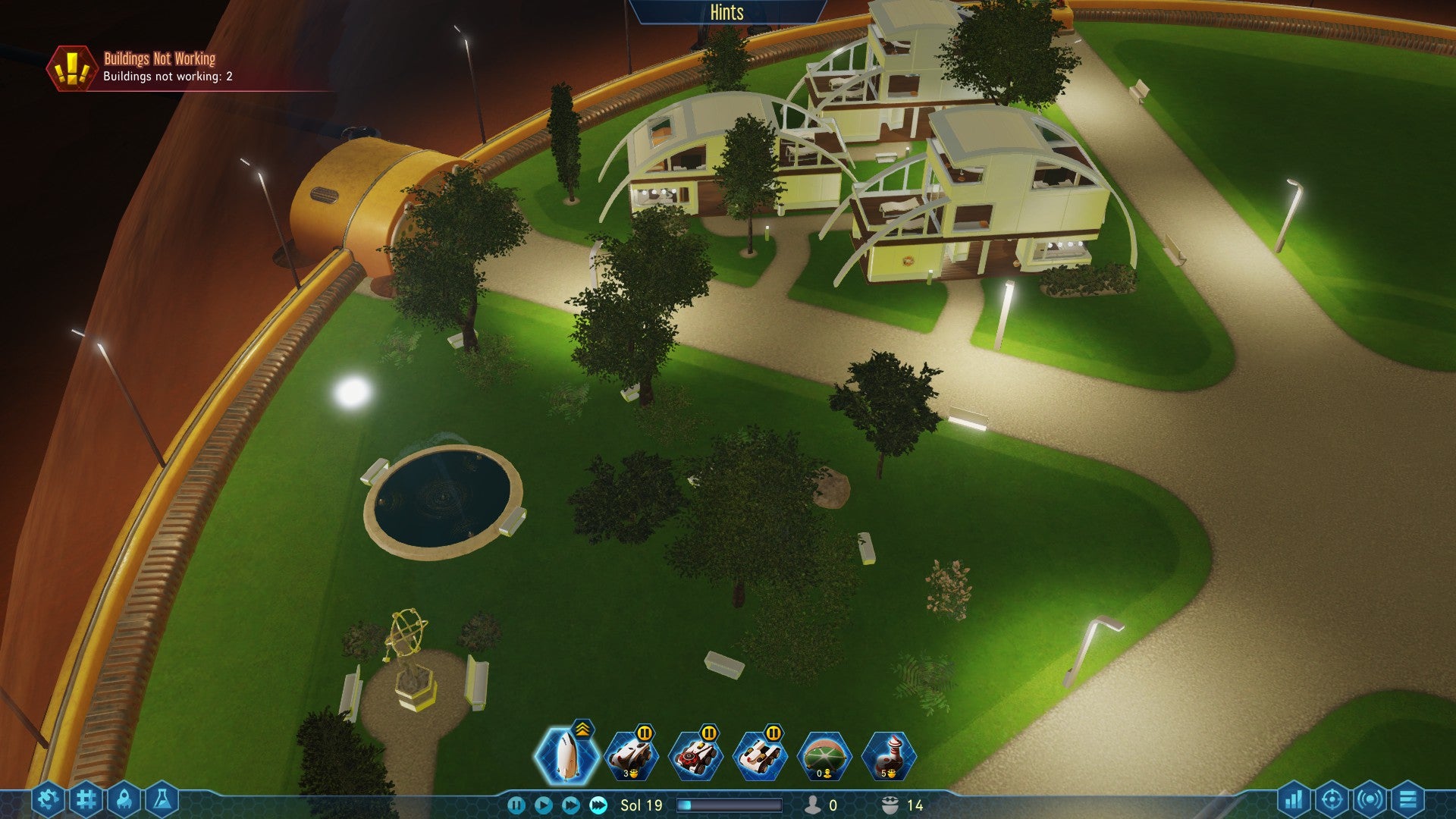 Parks are great, but we sure could use a bar here

What if the dome were closer to the mountains? I wondered. What if I built tunnels instead of cables to take power? Should I have put the colony closer to that water depot? Nothing seemed quite right. Nothing was thoughtful enough, organised enough, cute enough — not for my virtual people, but for me. I could deconstruct the buildings I didn’t like, but I didn’t have the in-game skill to get rid of them completely, meaning they’d just take up space and make everything worse.

I looked at my colonists’ soon-to-be home and frowned. My big dreams paled in the light of how shabby everything seemed, how consequential a bad start felt. I was God before Noah’s flood, fussy and dissatisfied. I didn’t want to waste my quirky colonists on something that wasn’t exactly right. I didn’t want to play with the human side of things anymore; I just wanted to build a nice city.

Ultimately I reloaded the game and started over, with the rocket still in mid-flight. I felt a little bit guilty for the virtual lives wasted. On my next go, I waited longer before bringing colonists up, carefully placing everything just where I wanted it.

Of course, none of that’s gone well either. Colonists won’t move between domes, which I didn’t realise, meaning I’ve made a shining palace of bars and casinos just out of reach of the people clamoring for it. We lost a bunch of people to a meteor storm, but no one’s having kids to replace them. People aren’t working all that fast, though, thanks to their religious traits, they’re in a pretty good mood about it — lilies of the field and all that.

It’s fun, but I’m already thinking of a better start. These colonists probably aren’t long for this world either.