Next week, the Jessica Jones TV series finally returns to Netflix for her sophomore season, and she’s bringing a specter from her past with her in the form of Kilgrave, a.k.a. the Purple Man. But it’s not just on TV that the villain has made a comeback. He’s also re-entered Jess’ life in the comics – and it’s a story that’s been handled excellently.

Although the premises might seem similar, the return of Kilgrave on the show (played by David Tennant) and the return of Killgrave in the comic (lord knows why the show thought losing the extra ‘l’ was worth it) happen in two very different contexts.

For starters, after the events of Alias #28 in 2004, Kilgrave was put into the Raft, Marvel’s premier prison for super-villains. On the show, Jess breaks his neck, permanently ending his physical presence in her life – meaning the character’s appearance in season two will more likely be confined to Jess’ mind than an actual return from the grave (although who knows with superhero stories). 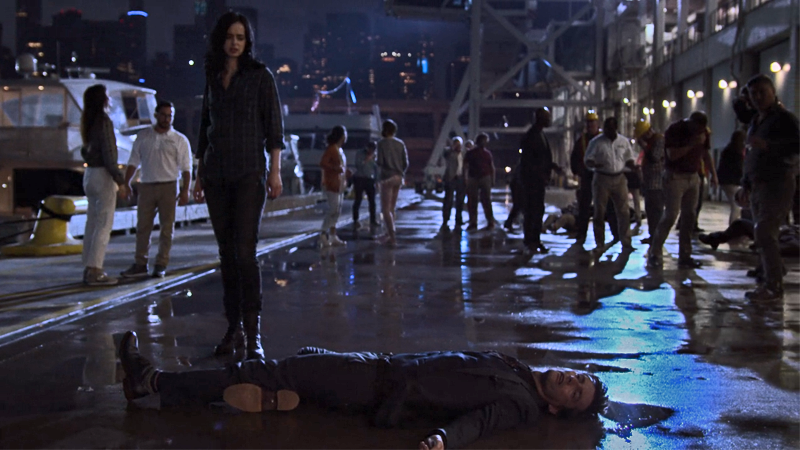 Jessica Jones (Krysten Ritter) stands over the fresh corpse of Kilgrave (David Tennant) in “A.K.A. Smile”, the finale of Jessica Jones’ first season.

The comics Killgrave broke out of the Raft during the early stages of 2011&#39;s Fear Itself event, but since then he’s mostly stayed in the background of the Marvel universe (although his kids have shown up in a few very creepy, but very good Daredevil storylines since).

It was only in this most recent arc of Brian Michael Bendis, Michael Gaydos, Matt Hollingsworth, and Clayton Cowles’ Jessica Jones – which started last October, but only just concluded in this week in issues #17 – that he’s re-entered Jessica’s life.

Since then, a decade passed since Jess beat the Purple Man to a bloody pulp and left him to get locked up, and a lot has changed for the hero. She’s now not only married to Luke Cage, but she’s had a child with him, Danielle. She has a strong support structure around her, from Captain Marvel/Carol Danvers to Spider-Woman/Jessica Drew, who all know the horrors of what she went through with the Purple Man. 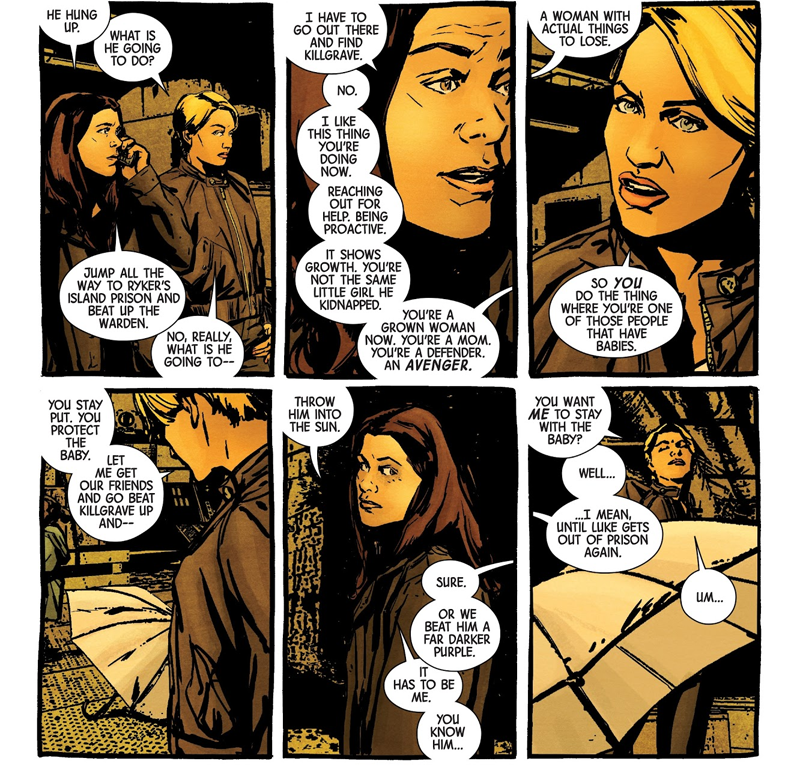 While the re-emergence of Killgrave in her life deeply rattles Jess – although initially, she’s mostly furious that SHIELD didn’t tell either her or Luke about Killgrave’s escape – she has had years to process and come to terms with what Killgrave did to her.

Over the last decade-plus of stories, she’s gone from strength to strength, and the minute she learns that Killgrave is on the loose, she’s putting plans into action, working with her friends (albeit begrudgingly – this is, after all, still Jessica Jones) to not just ensure her own safety, but that of her family.

It’s all simple, yet dramatic stuff, but more importantly, it leverages the great span of time between Jessica and Killgrave’s encounters to show just how much she has evolved and grown as a character in a way that the TV show simply can’t yet.

When Killgrave and Jess eventually meet face to face in this arc, they both acknowledge how Jess has changed – while Jess notes that Killgrave is still as childish and dangerously unaware of how skewed his own sense of morality.

Yes, she’s stronger and gone through training to resist Killgrave’s mental abilities – and is so completely at the point of wanting him gone forever out of her life that she wants him not just dead, but flung into the heart of the sun to make it extra certain – but in many ways, she’s also more vulnerable than she was the first time Killgrave abused her, because of her new family. 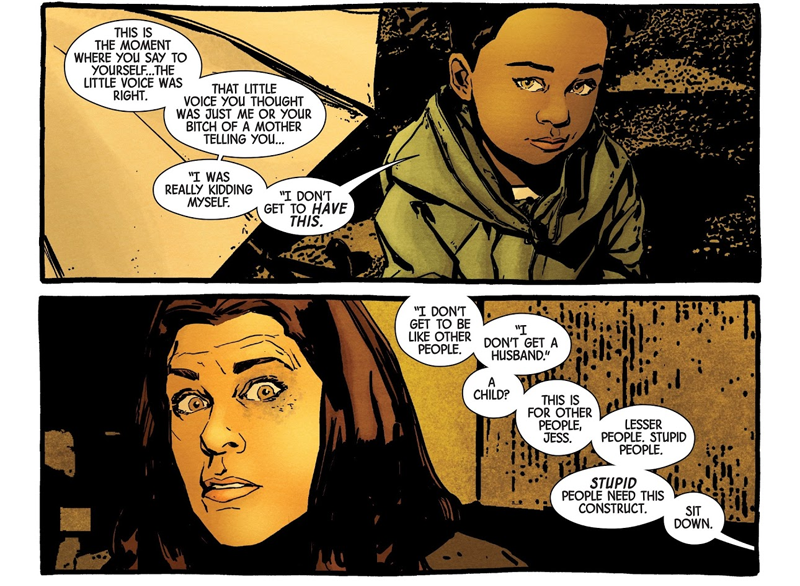 Killgrave talks to Jessica through her daughter, Danielle Cage, in Jessica Jones #14.

Jess is less scared of what Killgrave will do to her, but now she’s afraid what he can do to her husband (who she has Danny Rand drag off to Madripoor to punch bad guys just so he’s out of the way) or worse, to her daughter.

In fact, Killgrave does control Danielle early on in the arc, making for a deeply unsettling and genuinely terrifying moment that acts as a reminder of just how vulnerable Jess could be to him now that she’s opened herself up to friends and a “normal” life – something Killgrave lambastes Jess for even trying to have, through her own daughter.

And that primarily serves as the crux of this entire “Return of the Purple Man” arc. Killgrave has changed so little, while Jessica has grown so much.

We get to see Killgrave’s petulance on micro and macro scales, from belittling Jess for having a life after him to horrifyingly turning a crowd of civilians into a baying mob after his first face-to-face with Jessica ends with Carol Danvers (with some help from Kraven the Hunter and Nick Fury Jr.) trying and failing to assassinate him, after Killgrave mysteriously recovers from a fatal bullet wound. 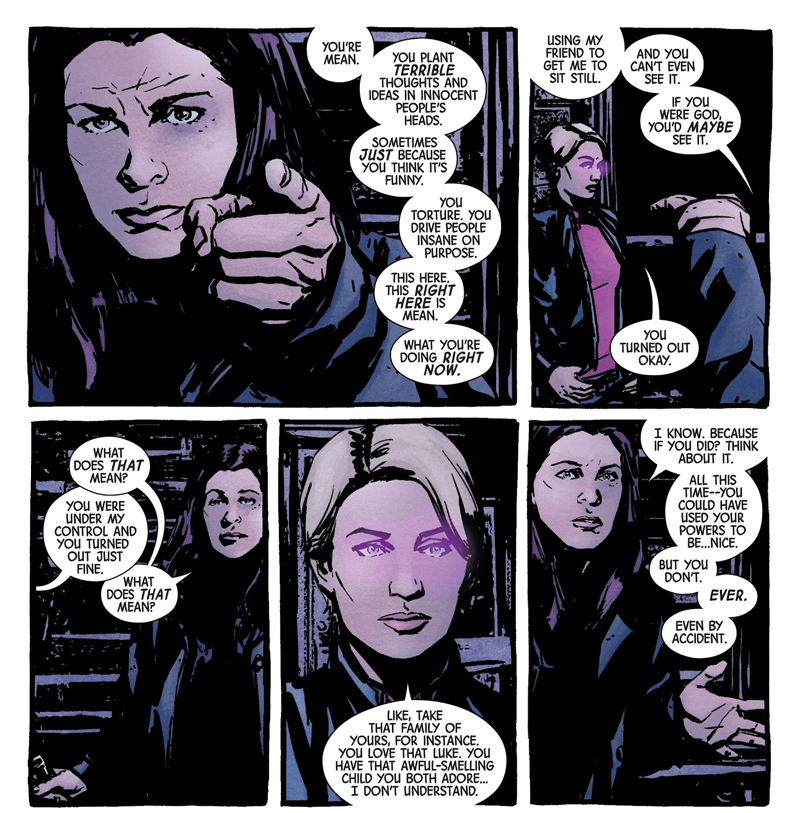 For all the honeyed words he tries to ply Jess with about how he’s changed, and how he sees his powers and his place in the world, he’s still the volatile and unhinged abuser who manipulated her all those years ago.

And throughout their encounters, no matter what Killgrave does to provoke her and scare her, it’s satisfying to see how Jess is no longer externally petrified of the man who’s haunted every waking moment of her life over the last 14 years. If anything, she’s just supremely tired of his bullshit.

This week’s final issue in the arc, Jessica Jones #17 dives a bit further into an idea Jessica Jones season one briefly dabbled with: Killgrave offering himself to Jessica as a tool for good, a chance to manipulate the world into a better place. But after a lengthy back and forth, she rejects his offer for two reasons. 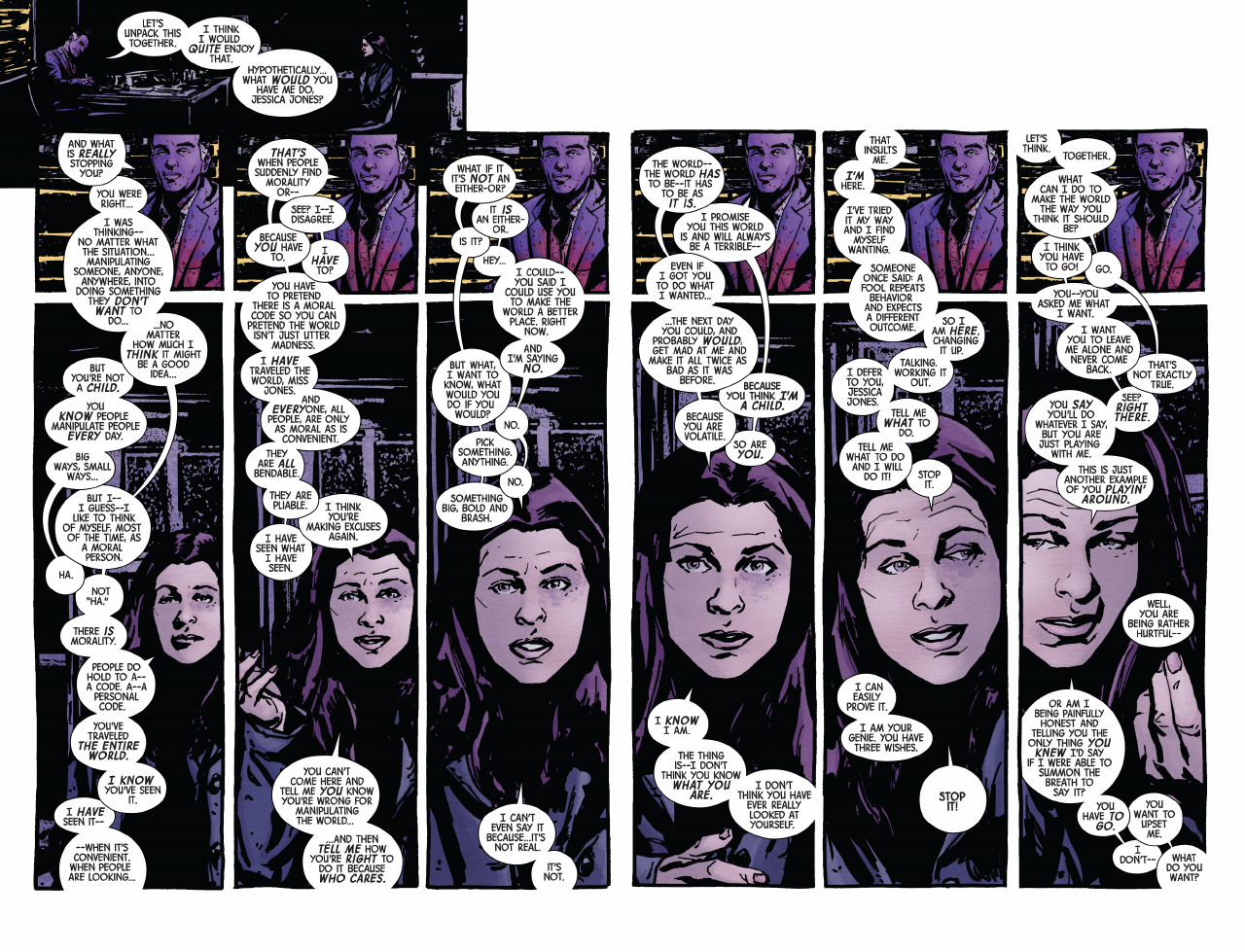 Killgrave and Jessica have a … wordy debate about morality in this week’s Jessica Jones #17.

Firstly, she believes neither she or Killgrave, who’s taken to calling himself a god, has a right to dictate how the world should be against its collective will – even if the world is a fucked up and scary place. It goes against human nature and her own morality to use the powers Killgrave has abused his entire life.

Secondly, she knows that for all his talk, any good change she could use Killgrave’s abilities to enact could just as easily be undone the minute his mood sours.

Over the years Jess has been able to examine herself, and her life, and come to know the person she is – sometimes reckless, even sometimes as volatile as Killgrave can be – but Killgrave never has, which is why she can never trust him. So she tells him that the world would be better off not if he purportedly tried to “help” it, but just … left it.

And he does. Killgrave gets up, leaves Jess, and promptly collapses dead in the street outside. Maybe it’s because he finally realises he can never get through to her again the way he did the first time, or maybe the idea of Jessica Jones having moved on from the cruel dominance he had over her is too much for him.

Either way, he finally listens to her and removes himself from the world. For good measure, Carol Danvers even fulfills Jess’ earlier fancy and literally drops Killgrave’s body into the heart of the sun, ensuring he really is gone for good (sadly, it’s off panel, yet still a weirdly cathartic moment). 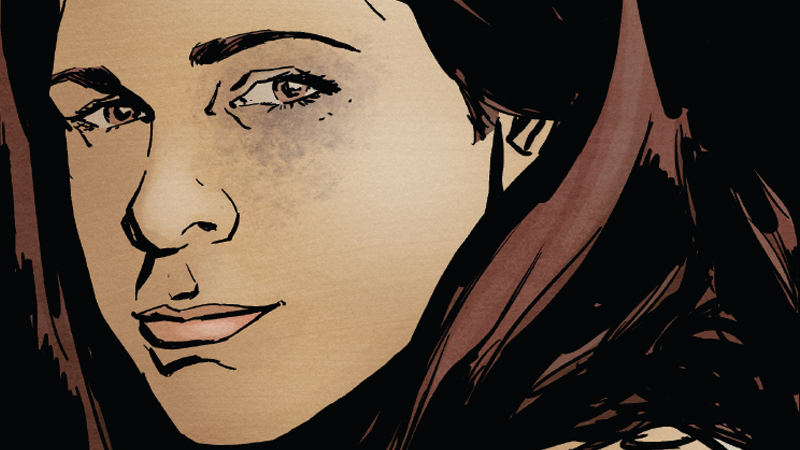 It’s a fitting end for Bendis’ time with Jessica Jones as a character, as he’s not only moving from his original creation but Marvel altogether, having signed an exclusive deal with DC Comics last year. With Killgrave well and truly out of the picture, this story arc shows exactly how much Jess has grown beyond the trauma that has defined so much of her character since she was first introduced all those years ago – and has come to form a fundamental part of her live-action adventures on Netflix.

We’ll have to wait until next week to see how Krysten Ritter’s take on Jessica begins the mental and emotional process of moving on from the Purple Man, but to finally see her comics incarnation do so was definitely worth the wait.