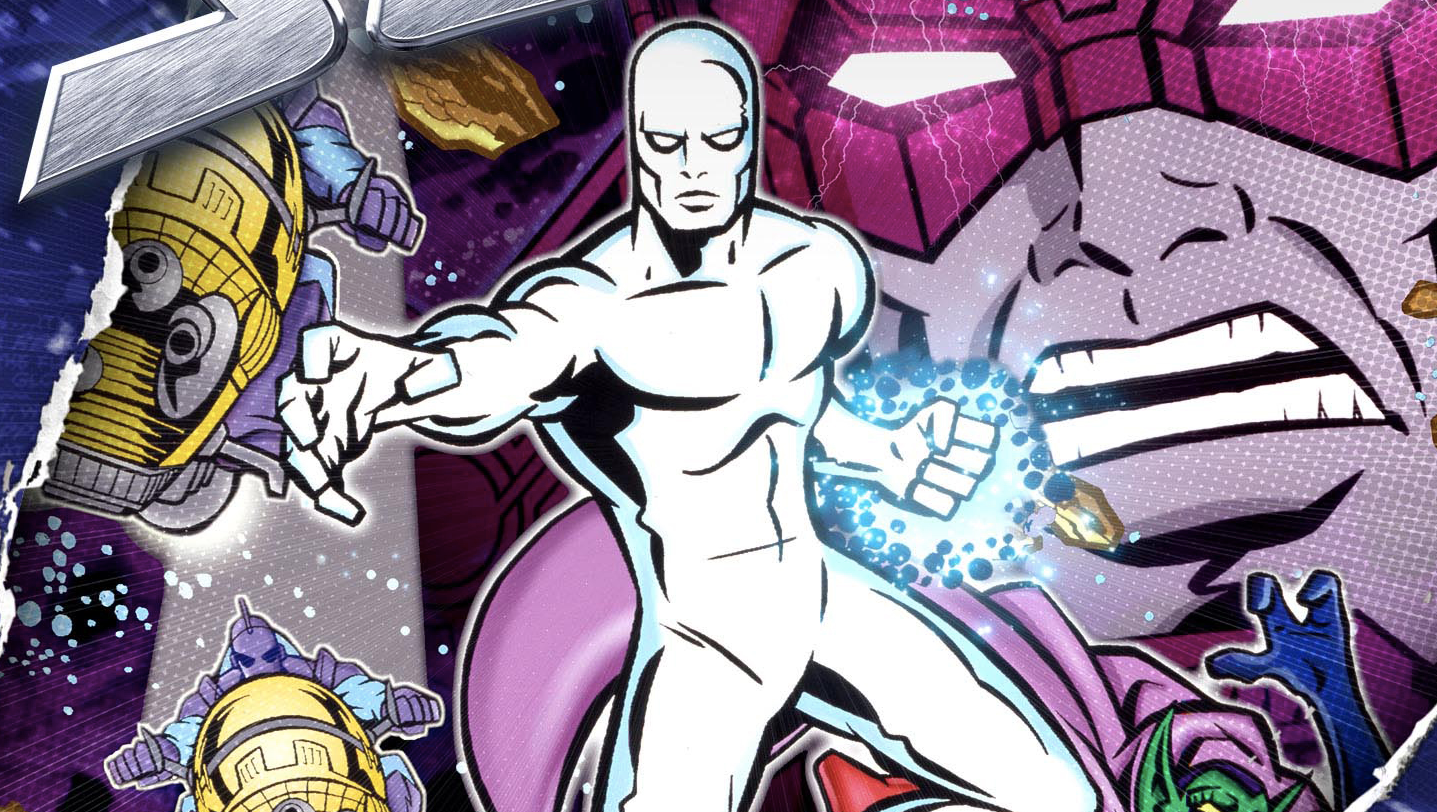 Though most of the '90s weren't a great time for Marvel's comics, they were a golden age for serialised cartoons starring the company's characters like Spider-Man and the X-Men. But it's not often that people bring up the short-lived, delightfully-Canadian Silver Surfer series that ran for one season on Fox in the spring of 1998.

Though it was canceled due to a rights disagreement between Marvel and Saban, Silver Surfer is one of the best animated series to come out of the studios' partnership and, looking back on it almost 20 years later, the show holds up surprisingly well.

What's most impressive about Silver Surfer is how the series manages to stay true to much of the comics source material while including messages condemning the evils of imperialism and slavery in a kids show.

As in the comics, Norrin Rad's homeworld Zenn-La is thrust into the ongoing conflict between two of the most powerful races in the galaxy: the Kree and the Skrull. The three races find a common enemy in Galactus, the eater of worlds, who arrives to announce that he intends to devour Zenn-La to sate his never-ending hunger.

Desperate to save his people, Norrin sacrifices himself to become Galactus' first herald, a cosmically-empowered scout who flies through the universe in search of energy-rich planets for his new master to consume, in exchange for Zenn-La being spared. 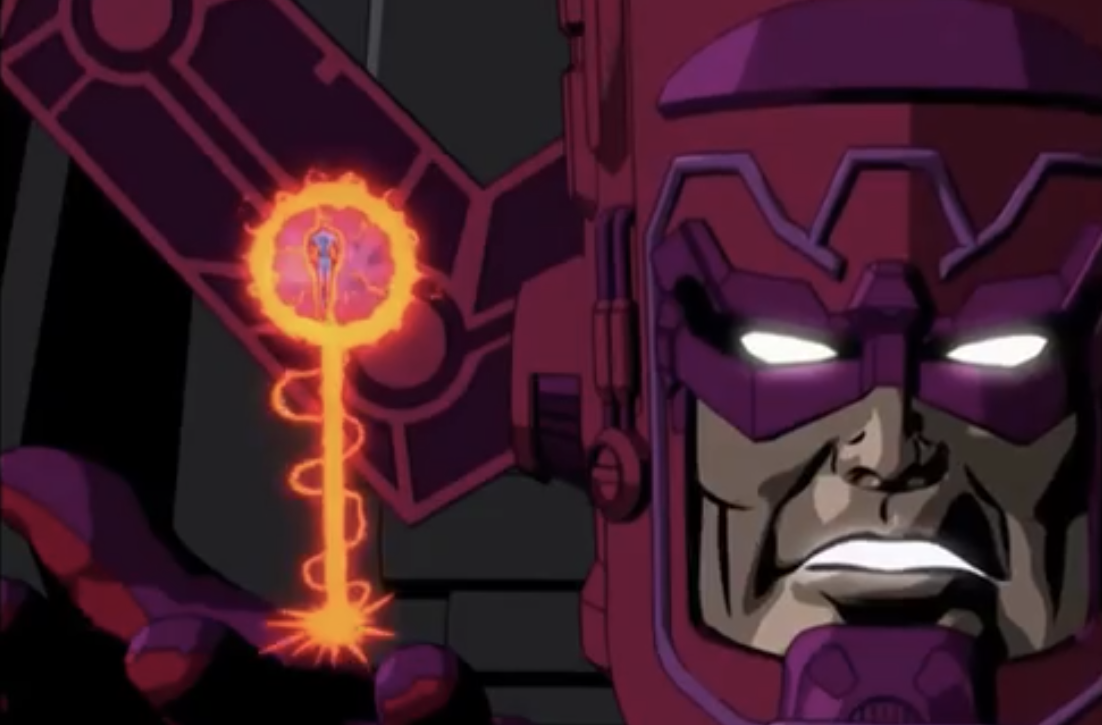 Galactus imbuing the Silver Surfer with the Power Cosmic.Image: Fox

Norrin's transformation into the Silver Surfer locks away the memories of his life before he became a messenger of death and destruction, establishing a novel concept that changes his relationship with Galactus in an interesting way that makes sense for a TV series.

Unlike most of his stories, where the Surfer's keenly aware of where he's from and why he works for Galactus, Norrin's amnesia allows him to enjoy something of a mentor/mentee relationship with the planet-eating entity.

Norrin still makes a point trying to select energy-rich planets that aren't inhabited by sentient life for Galactus, but his ignorance about the nature of his enslavement makes it so that he travels through the cosmos largely unaware of the reason he first stepped onto the silver surfboard. All of this takes place as the Watcher surveys from an uncharacteristically close distance that's representative of the show's cosmic (and decidedly grandiose) cast of characters.

Thanos, who will debut in live-action in Avengers: Infinity War in April, is still a mad Titan who wields power with his baroque, golden gauntlets, but he's less of a universe-ending Death worshipper and more of a cheesy fanboy who's obsessed with Lady Chaos, the poor man's answer to Hela, and a thorn in the Silver Surfer's side.

As the Surfer seeks out the truth of his origins and the fate of a suddenly missing Zenn-La, Thanos tails him from a skull-shaped citadel flying through space, where he obsessively details his plans to destroy Galactus to an uncaring statue of Lady Chaos.

At first, it's a little weird to see Thanos, Marvel's most menacing bad guy, written like the bumbling villain of most Saturday morning cartoons, but it begins to make sense when you realise just what kind of story the Silver Surfer series was trying to tell. Unlike Marvel Studios' current Cinematic Universe, where "cosmic" basically amounts to being on a handful of alien planets full of humanoid creatures, Silver Surfer was defined by the larger-than-life sense of whimsy and weirdness that artist and "King of Comics" Jack Kirby brought to his work.

Infinity and Eternity, the abstract anthropomorphisations of space and time, frequently appear as Silver Surfer's Greek chorus, commenting on Norrin's actions and debating over whether he's the champion they need to save the universe from collapsing in on itself. Ego, the Living Planet (played by Kurt Russell in Guardians of the Galaxy Vol. 2), is a recurring foe-turned-ally who wants nothing more than to avoid Galactus (see: planet-eating) and live peacefully as the last of his kind, and characters like Beta Ray Bill and Pip the Troll are allies the Surfer encounters on his travels. 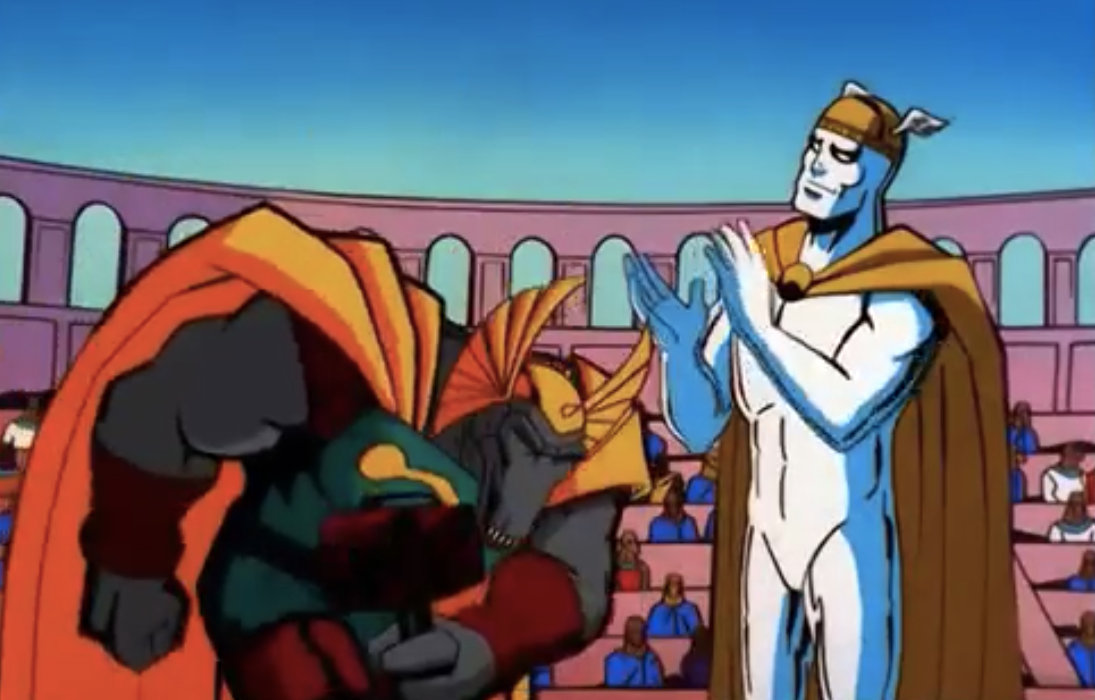 Beta Ray Bill and the Silver Surfer performing together in front of an audience.Image: Fox

Conspicuously missing from the show is any mention of the Fantastic Four, a refreshing change to the Surfer's origins that proves that they aren't at all necessary to tell an interesting story about him. Even after Norrin's freed from Galactus' bondage, he's forced to bear the Power Cosmic as both a blessing and a curse. His silvery skin and fantastic powers make him nearly invulnerable to physical harm, but they don't protect him from the scorn and shame heaped upon him by everyone he meets because of his past working with Galactus.

What few friendships the Surfer is able to forge are all tainted by the knowledge that, to some degree, he's responsible for Galactus' continued destruction, something that only the second herald, Nova, can really understand. Though he's surrounded by a galaxy of people, Norrin is always haunted by a distinct kind of loneliness, and Silver Surfer suggests that that feeling will never really leave him.

The Silver Surfer was woefully underserved in 2007's Fantastic Four sequel, but it's in the Silver Surfer TV show that you can see a pretty solid blueprint for a rebooted film franchise built around the character. The Silver Surfer is at his very best when he's smack-dab in the middle of a big story that has real stakes and consequences that can't be undone.

He's a harbinger of death known throughout the galaxy, but he's also a brainwashed son who loves and respects his adopted father's worldview.

Most importantly, though, he's a guy flying through space on a silver surfboard. And that's something Silver Surfer: The Animated Series understood that everyone wants to see.