What If We've Been Staring At Avengers: Infinity War's Missing Soul Stone This Entire Time? 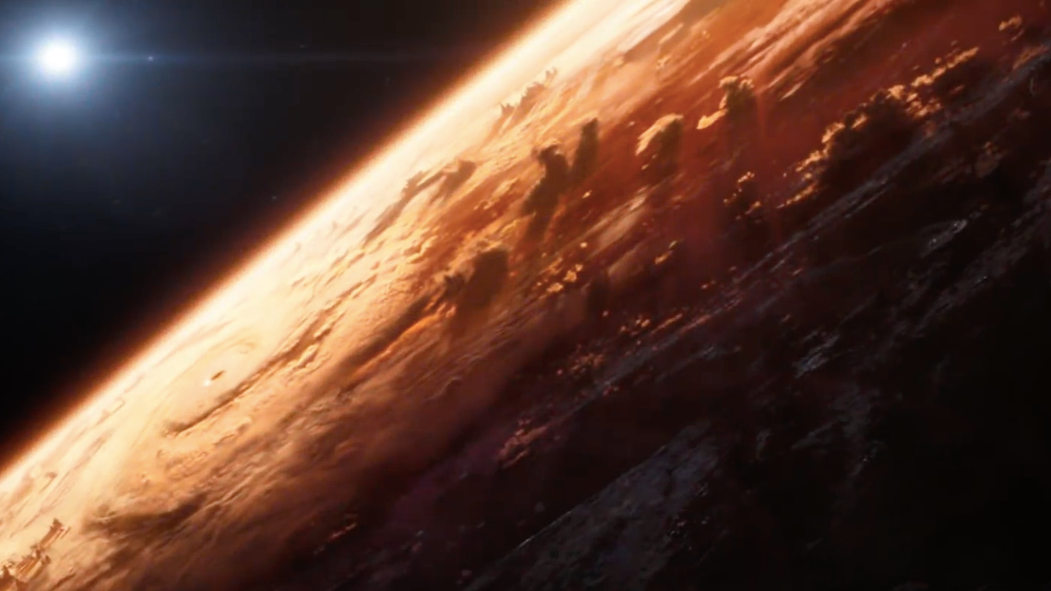 Though it would have made all the sense in the world if the sixth and final Infinity Stone — specifically, the Soul Stone — was hidden away in the heart of the vibranium meteorite that crashed into Wakanda, Ryan Coogler's suggested that's probably not the case. So the Soul Stone's still out there somewhere in the vast Marvel Cinematic Universe. But what if it's been hiding in plain sight this entire time?

The unnamed planet seen at the very beginning of the infinity War trailer.Photo: Marvel

Now that Marvel's decided to push Avengers: Infinity War's theatrical release up by an entire week, the mystery about the Soul Stone's whereabouts feels that much more pressing, considering that it was neither seen nor even mentioned during Black Panther.

All five of the other stones have been accounted for and stashed away for safekeeping around the MCU, meaning the Soul Stone has to appear at some point during Infinity War in what one imagines will be a rather epic reveal.

All six of the Infinity Stones being described by the Collector in Guardians of the Galaxy. The Soul Gem is depicted as being orange in colour.Photo: Marvel

That's what makes the theory that the Soul Stone is an entire planet, first proposed over at ScreenRant, so... interesting. While we've all assumed that the Soul Stone would be introduced as yet another MacGuffin to be bandied about by heroes and villains, it's possible that the stone is actually the humongous, orange-hued planet shown to us in the Infinity War trailer.

It's a wild idea, to be sure, but there are enough potential pieces of information in the newest Infinity Wars prelude comic, as well as precedent in Marvel's comics history, that makes it very, very compelling to consider.

It's important to remember that Official Movie Prelude comics, despite being "official," have a history of not being 100 per cent in sync with the information eventually included in films. But the previous Infinity War book did accurately explain how Shuri managed to heal Bucky's mind, something we see in Black Panther final end credits scene.

The second and final Infinity War prelude is essentially a refresher course in where the Mind, Power, Reality, Time and Space Stones are. In the New York City Sanctum Sanctorum, Wong contacts Doctor Strange with a warning about an ominous force he can sense that is headed toward the planet. What Strange doesn't understand, Wong explains, is that the activation of the five known Infinity Stones is a sign that the sixth, "the biggest threat of them all," will soon follow suit: 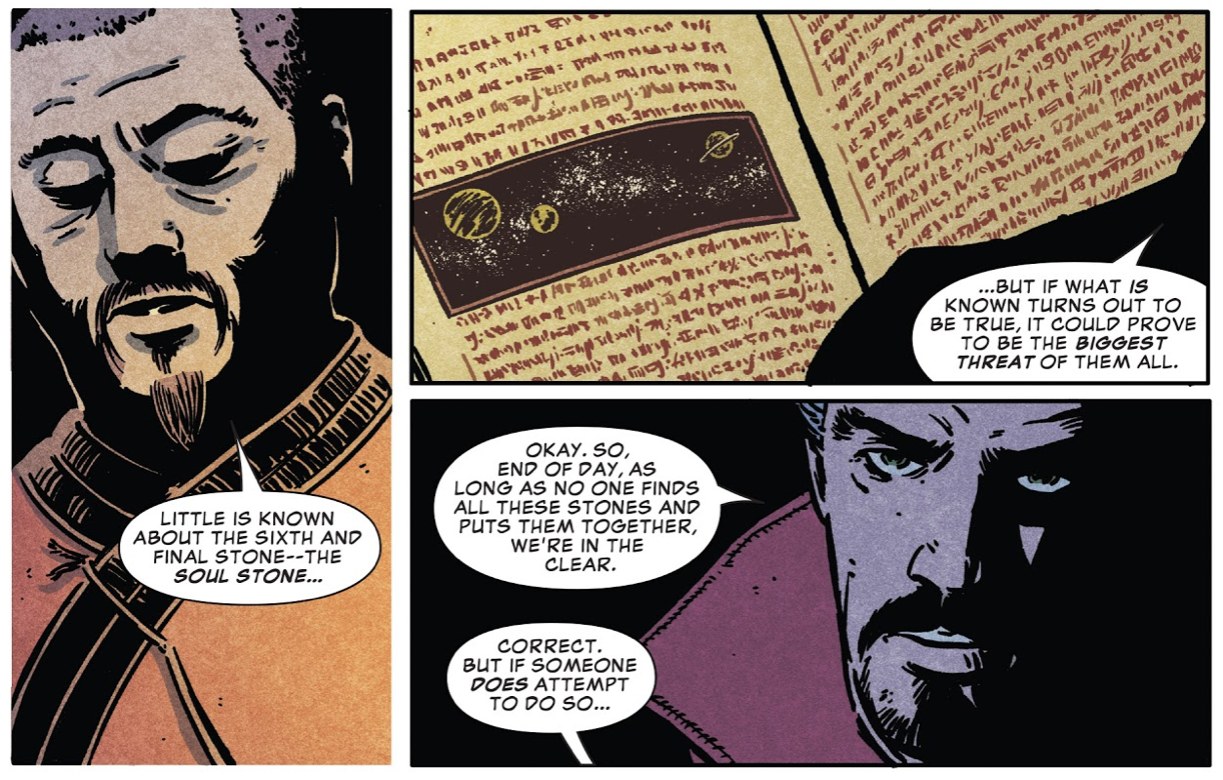 Wong doesn't elaborate on whatever is written about the Soul Stone in the book he's holding, but what's noticeable is that the panel featuring the Soul Stone does depict three planets rendered in a sunny, orange-ish yellow hue — and one of them appears to have a ring around it.

There's not all that much information in the Infinity War trailer about what happens in the film, besides a handful of the Avengers ganging up to fight Thanos on what appears to be an alien planet bathed in orange light. One might imagine that the craggy rocks we see Thanos pummelling Spider-Man and Iron Man on are the surface of that planet, but that begs the question: Why there?

It doesn't exactly make sense that the Avengers would intercept Thanos somewhere out in space and then fight him on an alien planet. Besides, you can see in the trailer that the Mad Titan appears to head directly to Earth at some point in the film.

It would fascinating if the entire orange planet itself was actually the Soul Stone — and when you think it about it, it's not the most outlandish idea. Each of the previous Infinity Stones have all been introduced in physical forms that weren't polished gems. The Reality Stone, for example, was first depicted as Thor: The Dark World's Aether, a writhing, amorphous mass of red and black energy that briefly lived inside Jane Foster.

It's completely within the realm of possibility that the Soul Stone's containment unit could just be a straight-up planet, presumably one it could consume the life force and souls from — which happens to be something the Soul Stone is fond of doing in the comics: 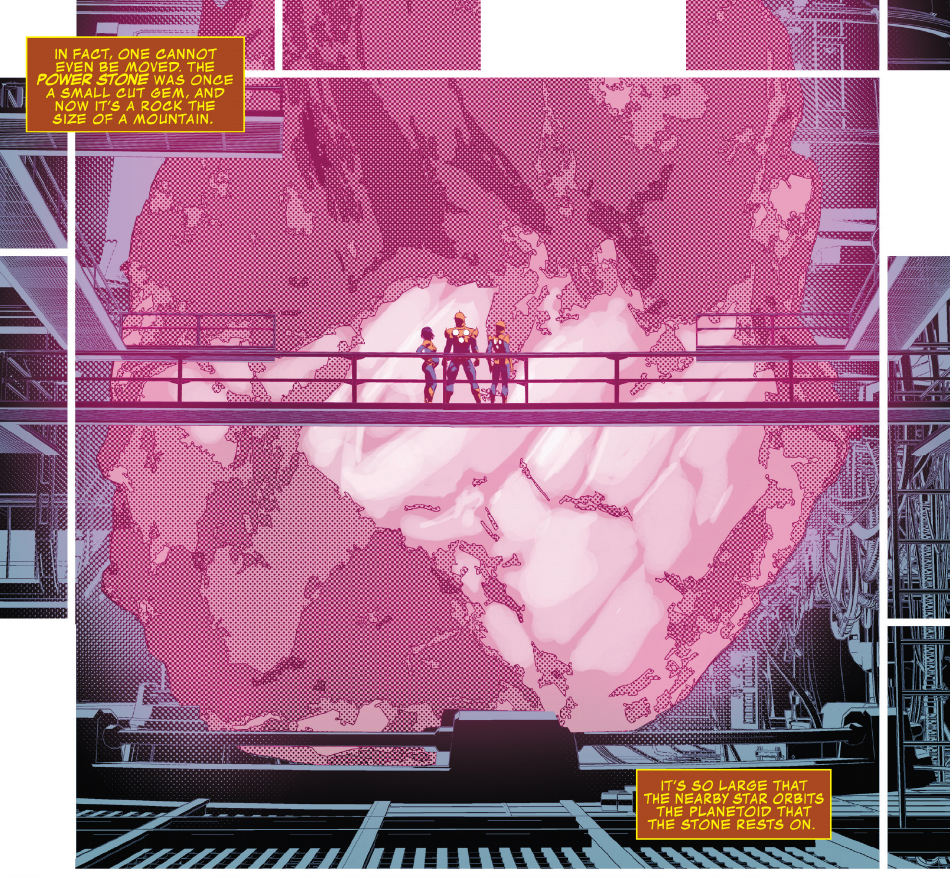 What's interesting is that this theory is almost exactly what's happening with the Power Stone in Marvel's comics right now. In the most recent issue of Infinity Countdown Prime, it's explained that the Power Gem has technically become the size of a small planet after crashing into a planetoid and refusing to let go.

Infinity War is the beginning of the end of this first epic chapter of the Marvel Cinematic Universe, and it's going to need some legitimately breathtaking concepts and visuals to feel like a fitting bookend. We've seen armoured rhinos charging crowds of people and maniacal villains level entire cities. Maybe it's time to see Earth's Mightiest Heroes fight to destroy an entire planet.