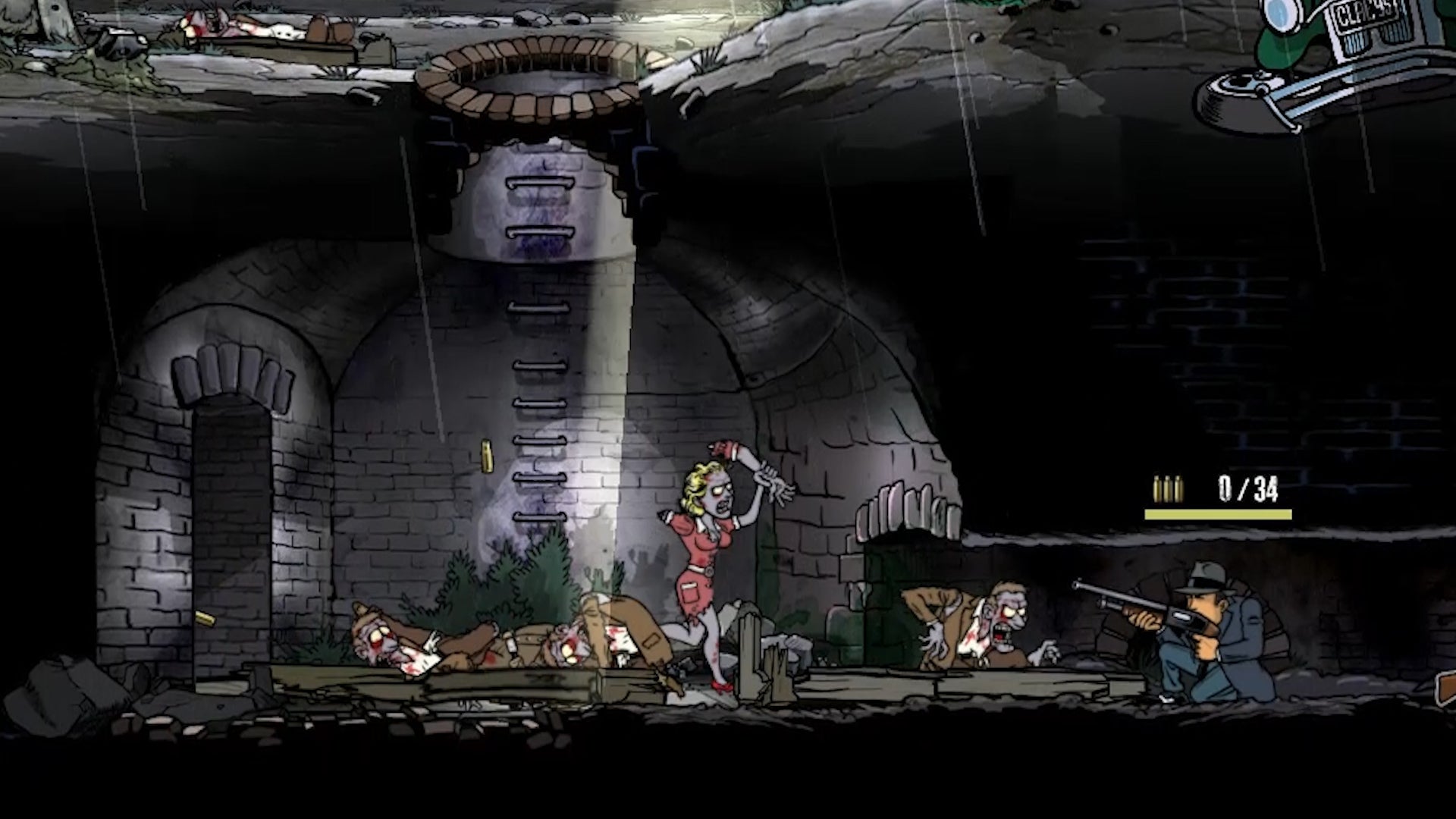 Old-timey mobster Vinnie Cannoli returns for another round of zombie slaying in Crazy Monkey Studios' Guns, Gore and Cannoli 2. The first game is an excellent tribute to the old school run-and-gun arcade shooter.

The sequel, with its 360 degree shooting, double-jumping and dual-gun action? It's friggin' awesome.

When we last saw Guns, Gore and Cannoli's mobster hero, he was shooting his way out of the zombie-infested city of Thugtown back in the 1920s. Now it's the 1940s, and Vinnie finds himself being hunted by mobsters sent from a mysterious new Don operating out of the infected area. As if Vinnie needed an excuse to shoot a bunch of people. Or zombies. He's not really particular.

This time around he's got a lot more ways to get the job done. While the first game only let Vinnie shoot straight ahead, the sequel introduces full 360 degree aiming. Using the mouse or the right analogue stick of a game pad, Vinnie swings his pistols, baseball bats, chainsaws, machine guns, bazookas and other implements of destruction in a sweeping arc.

It's like a twin-stick shooter where the first stick only goes left and right. The new weapon wheel allows Vinnie to quickly switch between a broad range of deadly tools. 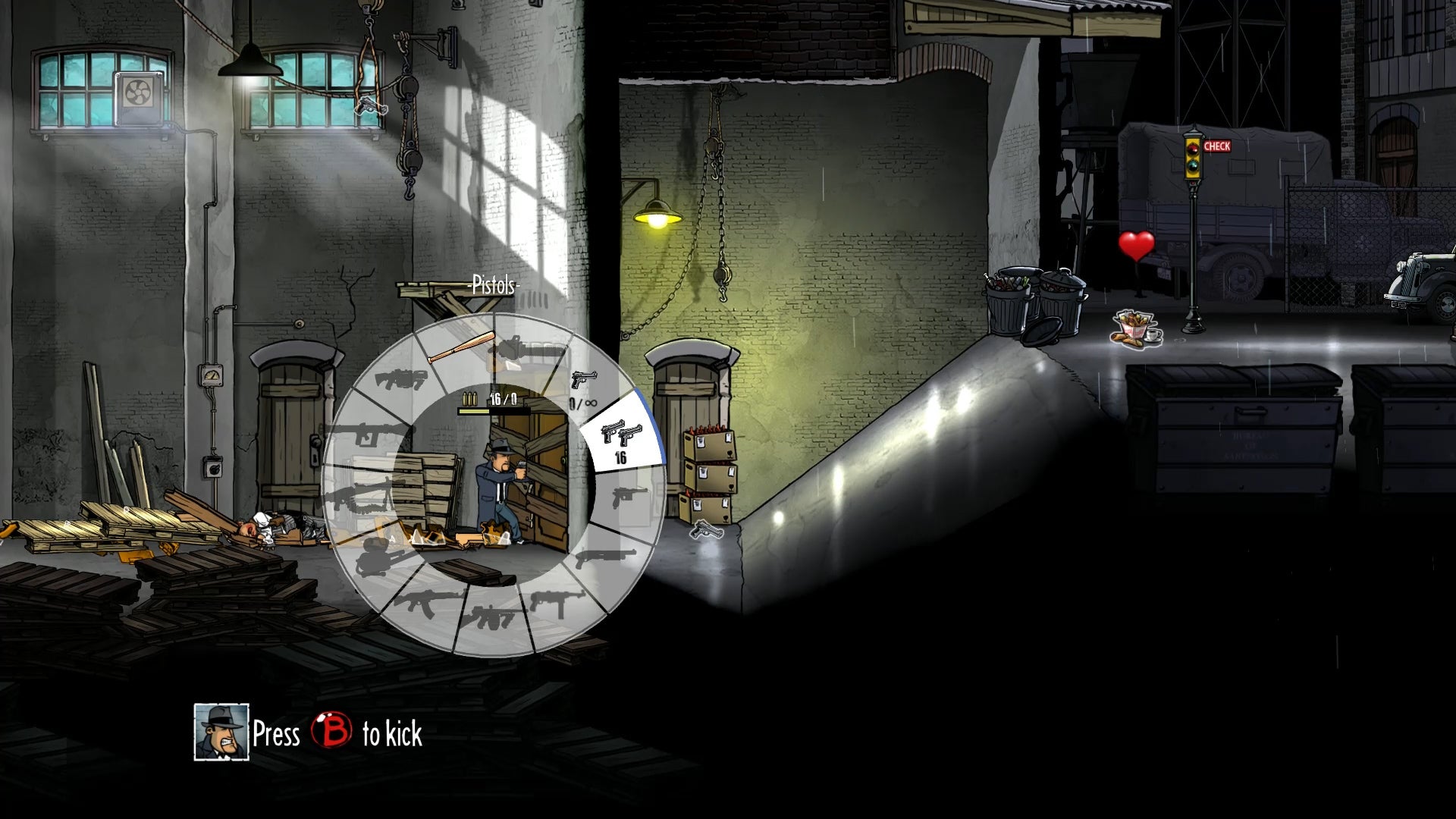 One of his most important new tools isn't found on that wheel, though. Vinnie can jump twice now, allowing him to reach great heights. The developers have made great use of his enhanced mobility, building the game's levels upwards as well as outwards. 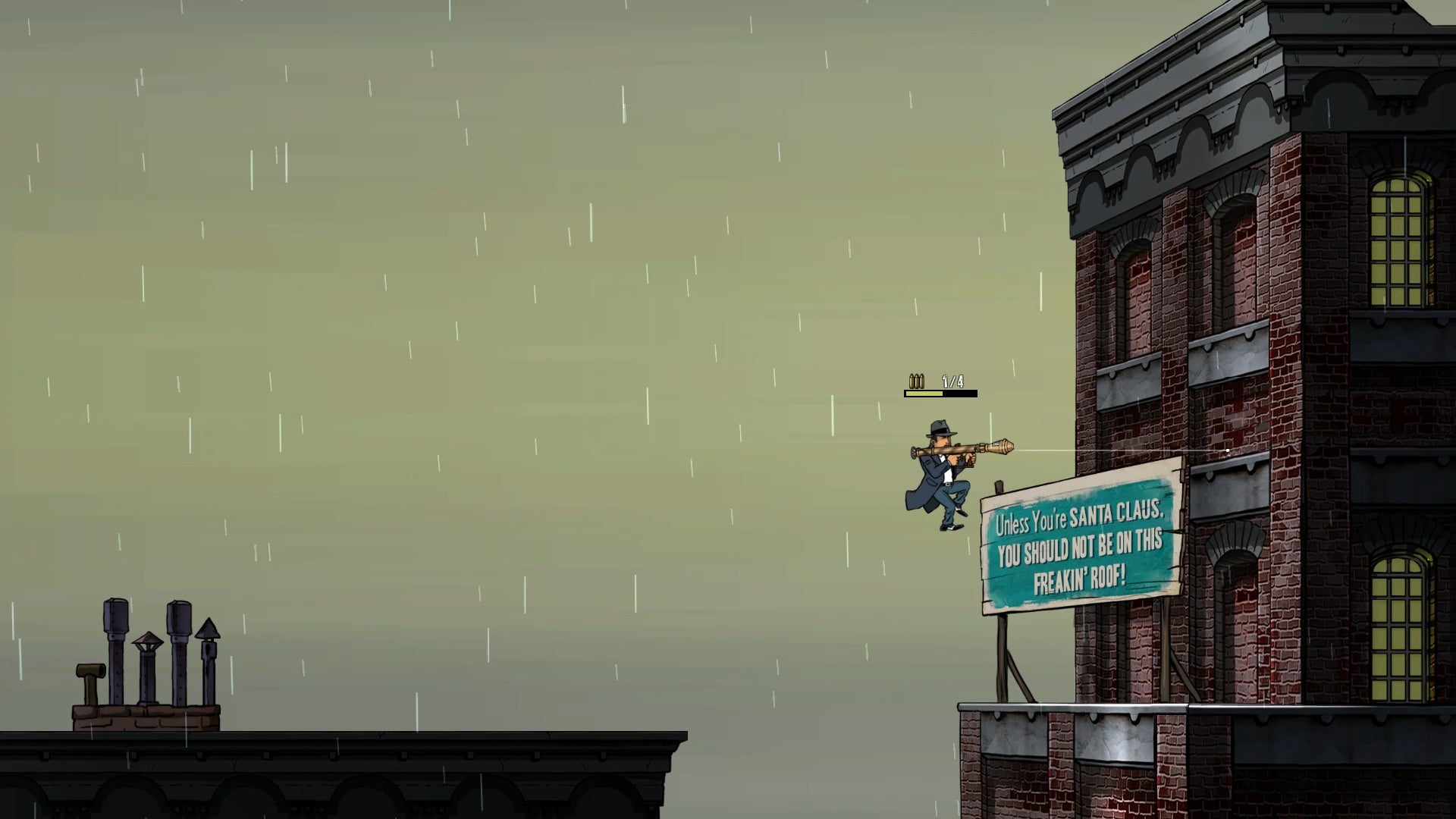 To account for the enhanced mobility and 360 degree aiming, the sequel pulls the camera back quite a bit. Vinnie is much smaller on the screen than he was in the first game. On the plus side, players get to see more of the game's gorgeous 1940s era environments. 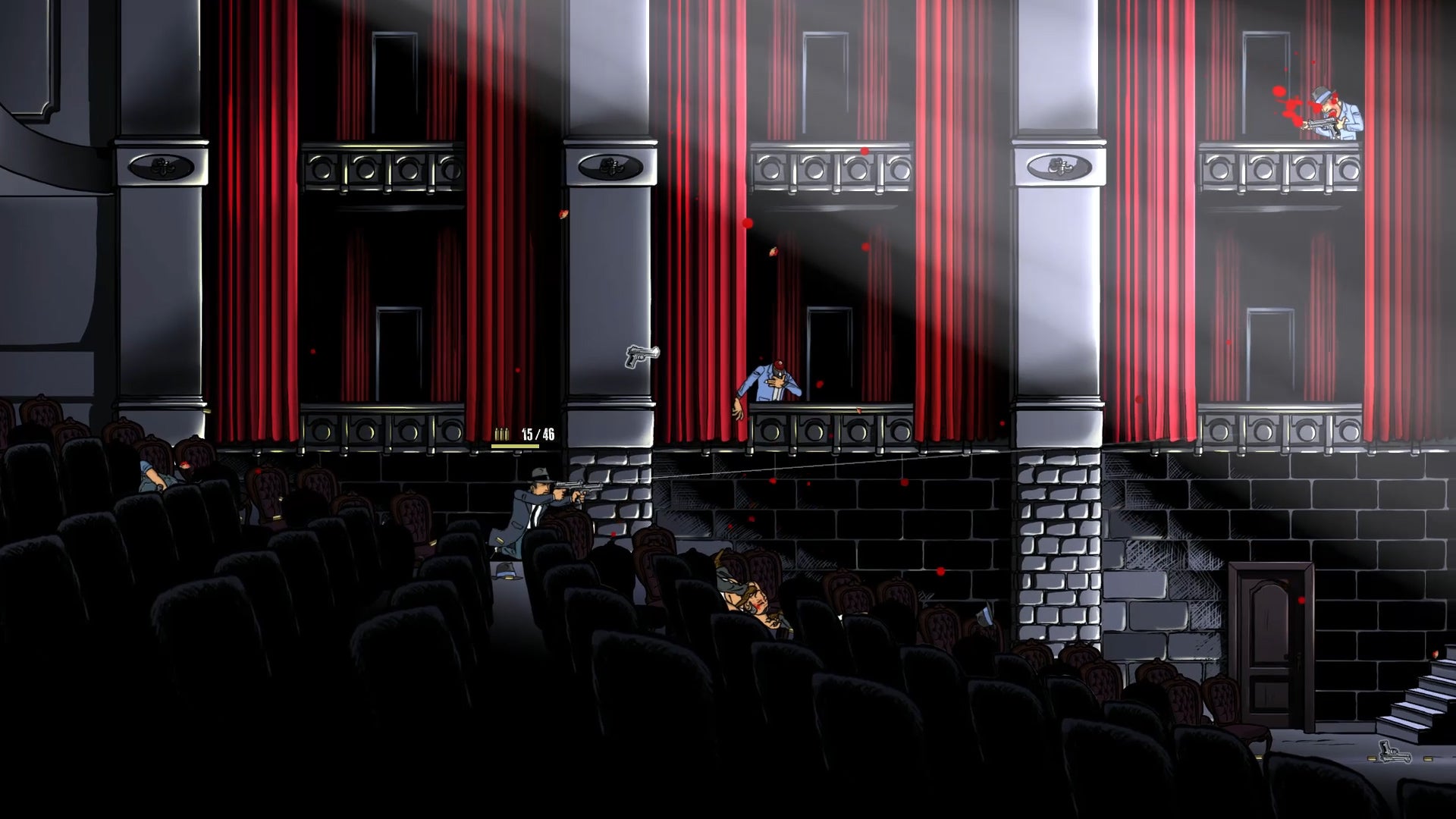 One of the most exciting new additions to the game is online multiplayer - the first Guns, Gore and Cannoli only had local. Sadly I didn't manage to get into any multiplayer matches on Steam, but it looks like a chaotic good time for people who like to play online with their friends.

Guns, Gore and Cannoli 2 is one hell of a sequel. It maintains the cheesy humour and over-the-top feel of the original, while adding new features and mechanics that make it so much more fun to play. 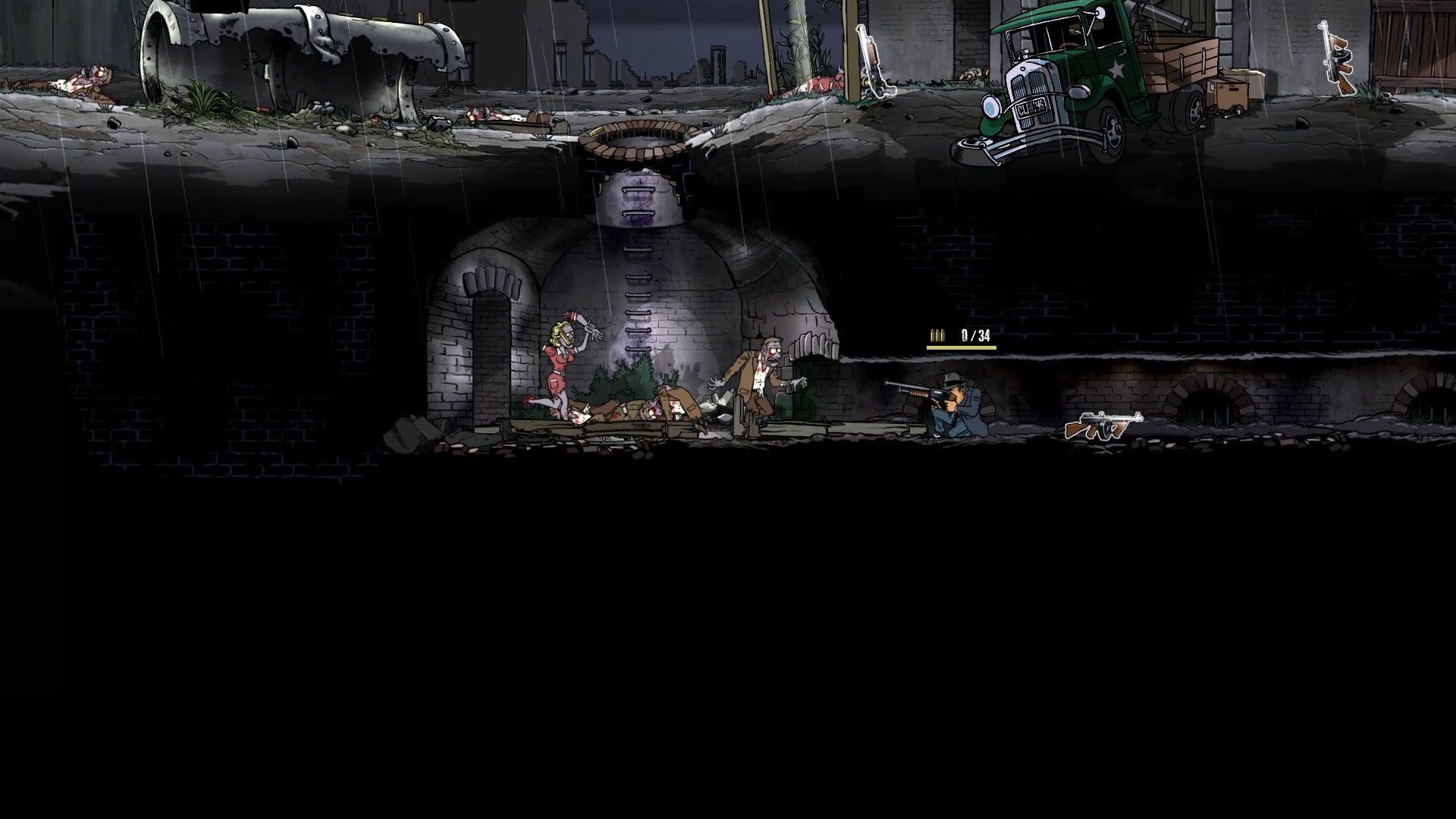 See? Told you there were zombies.

Guns, Gore and Cannoli 2 is currently available on Steam, with Xbox One and PlayStation 4 versions in the works.