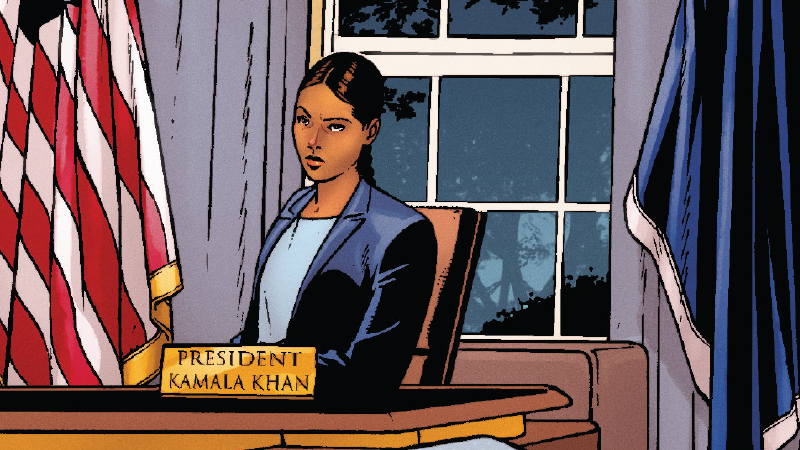 Hail to the chief.

Before Laura Kinney takes off the Wolverine mantle in the present day to become X-23 once more, All-New Wolverine is heading to the future for a story set long after she's traded in Wolverine for an altogether new adventure called, obviously, "Old Woman Laura". Kicking off in this week's All-New Wolverine #33 - by Tom Taylor, Ramon Rosanas, Nolan Woodard and Cory Petit - the issue flings us into an indeterminate future where a lot has changed for Laura and her formerly-preteen clone Gabby. First, it's Gabby herself operating as Wolverine, complete with a slick new suit that combines "Stark-level Graphene" and Vibranium to make Gabby look a little bit like X-Men-meets-Tron. 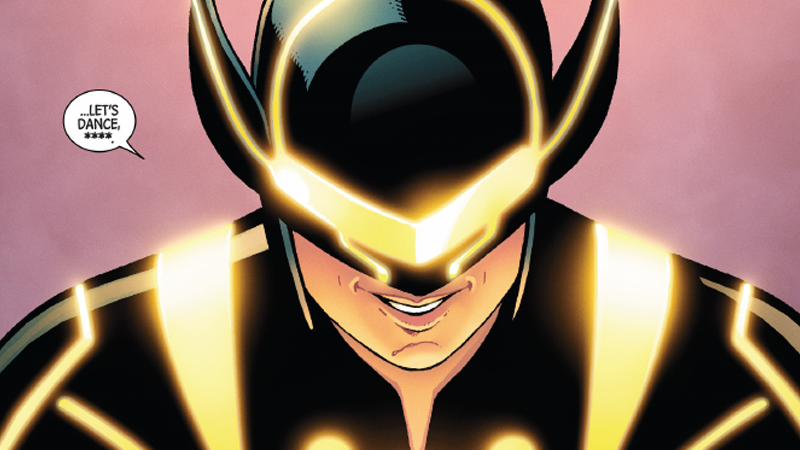 But why has Laura handed over the reigns and some rad-looking neon claws? Because her current role is a bit bigger than superhero: She's become the queen of Marvel's premiere fictitious Southeast Asian nation, Madripoor, ushering in a peaceful era of prosperity and technological advancement for a nation that is also often portrayed as the hive of scum and villainy of choice for Marvel bad guys.

There's also a more tragic reason that this future Laura's hung up her superhero costume: She's found out there's a genetic error in her cloning process, one that was corrected for future clones of herself such as Gabby. But it's incurable, and left her with months to live.

In that time, Laura's decided she wants to do two things: Kill Doctor Doom (who in this future, previously launched a "Doom War" on the world), and rescue her long lost clone sister Bellona, who in the current timeline - so, err, the past of "Old Woman Laura" - has been locked up by SHIELD. Finding information on where Bellona is now leads Laura to Washington, where she bumps into a fellow former hero: Kamala Khan, the Ms Marvel-ous President of the United States.

Well bump into isn't technically correct, considering Laura decides to casually break into Kamala's Oval Office to test her security. Kamala's Chairwoman of the Joint Chiefs of Staff, a very angry-looking Maria Hill, ends up tagging along on Laura's mission to infiltrate Latveria, Doom's isolated kingdom, and find Bellona - but honestly, I'd like to see a few more stories in this alternate future with the Madame President beyond her small part in Laura's final revenge mission. A West Wing-style miniseries with President Khan, perhaps? 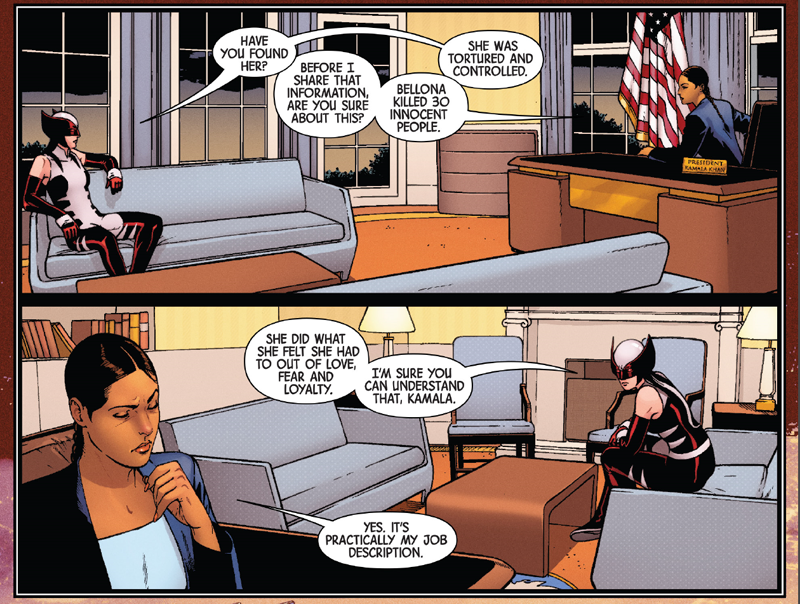 Honestly Kamala, I don't think "Love, Fear and Loyalty" is that good a Presidential slogan, but you do you. Illustration: Ramon Rosanas and Nolan Woodard (Marvel Comics)

It's a nice future to daydream about, honestly.

Maneater's Orca Tank Is Terrifying, Even As A Godlike Megashark

Ian Walker 30 May 2020 5:00 AM
I’m absolutely in love with Maneater, the new shark game from Tripwire Interactive. Nothing in video games has ever made me feel as powerful as cruising the Louisiana bayou and wantonly chomping passing barracuda. But one setpiece managed to inject my shark-inspired reverie with a terror made only more potent by the rest of the game’s dedication to its over-the-top power fantasy.