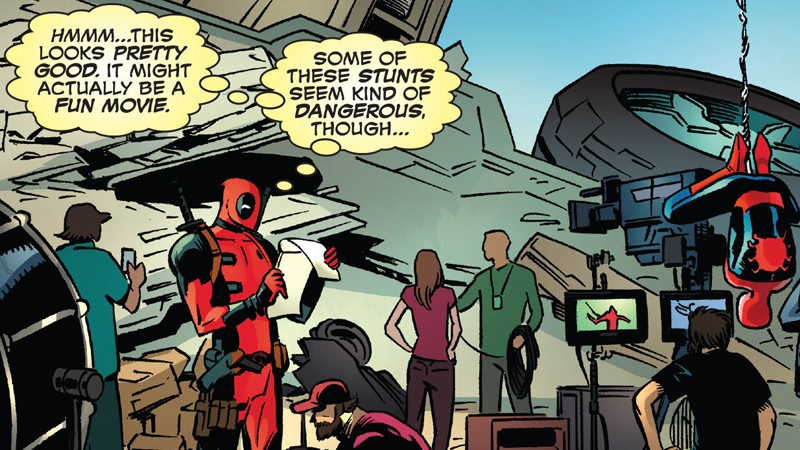 Deadpool may be a master of breaking the fourth wall, but not even he can get around some muddled rights issues. At least, according to one Marvel artist.


Deadpool and Spider-Man on the set of, err, Deadpool in Spider-Man/Deadpool #6. But not *that* Deadpool. Image: Reilly Brown, Rick Magyar, Le Beau Underwood, Scott Hanna, and Jason Keith (Marvel Comics)

Although the occasionally stormy relationship between Marvel and Fox over the latter’s holding of key movie rights for Marvel characters (such as the X-Men and the Fantastic Four) has softened in recent years, it has apparently not softened so much that Marvel’s Deadpool comics can make the occasional visual nod and wink to the character’s movie exploits, according to Spider-Man/Deadpool artist Reilly Brown. Brown took to Instagram recently to share a few behind-the-scenes bits of art from a story he pencilled in Spider-Man/Deadpool #6 in 2016, which saw Deadpool visit the set of a movie adaptation of his own violent exploits. As you can expect, there are a lot of jokes about the current superhero movie boom, but for an extra visual joke, Brown apparently wanted to suit Deadpool up in his actual costume from Fox’s Deadpool movie for scenes when Wade himself is called on to be a stunt double in the movie. The movie suit is only subtly different to Deadpool’s comic suit and it would have been another subtle joke in among all the other jokes in the issue. However, the difference was enough for Marvel’s lawyers to notice… and politely ask that Brown redraw those scenes. He explained on Instagram:

Someone asked if I’d ever drawn Deadpool in his movie costume, and I actually did once, for an issue of Spideypool. In this story, Wade got a part in a Deadpool movie playing as the stunt double. For the scenes on set, I thought it would be fun if he wore the actual movie costume, so that’s what I drew. I didn’t think anyone would notice or care, since the difference is just a couple of straps and some knee pads. But they did notice, and made me change it back to his typical character design, because the lawyers wouldn’t allow them to use the movie costume for some reason! So weird. So I had to redraw that Deadpool in all those scenes. I ran into a similar lawyer-induced problem with Marvel a few months ago when they asked me to do an ad for some smart phone drawing software. I was going to draw Deadpool, but it turned out they weren’t allowed to use him for the ad, so we figured Spidey would be safe, and I did a drawing of him. Turned out, they weren’t allowed to use Spidey either! So I had to do it again. This time I used Iron Man, and there was a long conversation and lots of phone calls before we figured out which Iron Man costumes would be safe for me to draw! The moral of the story: study your licensing deals! #dailydeadpool #spideypool #deadpool #costumes #freelancelife #reillybrown

The legal wrangling around Fox’s ownership of the Deadpool movie rights also impacted another visual in-joke Brown had in the comic, apparently. Originally, the actor playing Deadpool in the story, Donald Dryans, was meant to look much more like actual Deadpool movie star Ryan Reynolds. So when he was asked to tweak that joke too, Brown had to redraw the face and add a moustache for good measure: 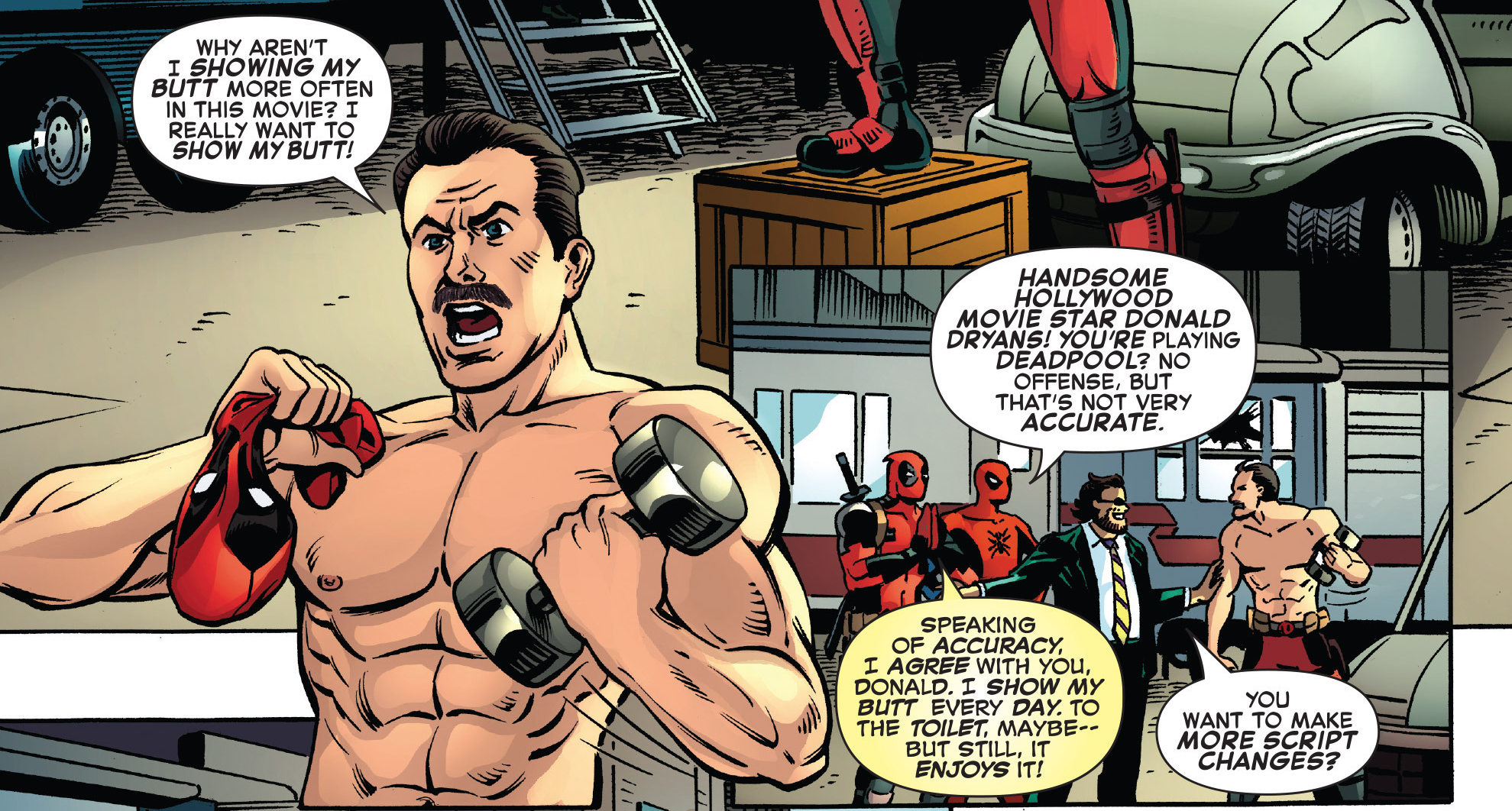 You can still kinda see a likeness under that ‘stache. But even that was too much for Marvel’s legal team! Fast forward to now, when Disney’s wild deal to purchase 20th Century Fox is in the works, maybe these references would have been allowed. Or at least, they’d probably be allowed when the deal eventually actually goes through. But at least for the moment, it seems as though Marvel’s comics can’t quite make nods to Fox’s Marvel movie exploits just yet.