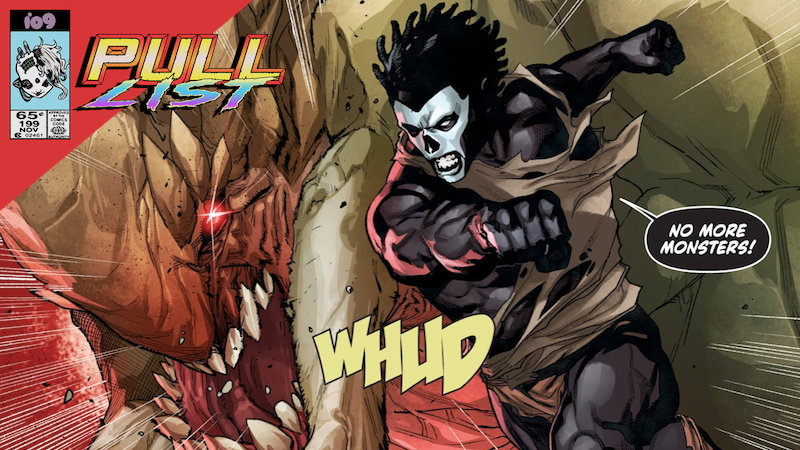 Everyone knows that when you make deals with demons, whether they be supernatural or simply devilish in their temperaments, there’s always, always a price to be paid in the end. And yet, people are always surprised when it’s time to settle up their debts – and then realise there’s a catch.


In this week’s very best comics, the forces of good and evil find themselves in unlikely, uneasy alliances of convenience that under most any other circumstances would be nearly unimaginable.

But when you’re trying to save (or destroy) the world, sometimes you’ve got to be willing to throw caution to the wind in order to achieve your goals. Common sense be damned.

DC Comics’ Young Animal imprint is really coming into its own in the aftermath of the publisher’s Milk Wars event, which brought the Justice League, Doom Patrol, Shade, the Changing Girl, Cave Carson, and Mother Panic together to fight a reality-altering, milk-selling organisation from another dimension.

With the multiverse saved yet again, Young Animal’s band of misfit heroes are moving on to bigger, weirder adventures of their own. Mother Panic’s takes her into the Gotham City of a not-too-far-flung future, where all of the good the world’s heroes have done seems to have been for naught.

Just a few years from the present, all of Gotham’s heroic vigilantes have disappeared and been replaced by the Collective, a group of eccentric artistic types who have taken control of the city and fundamentally reshaped its image.

With vigilantism outlawed, the Collective is able to market the idea of a New Gotham – a gleaming metropolis of the future where crime is a thing of a past and costumed weirdos no longer prowl the streets in search of innocent civilians to terrorize.

Though this new Gotham of the Future definitely has its perks (it’s much cleaner), there’s a falseness to the would-be utopia. The Collective’s ads marketing the city as a paradise are, in a way, merely the newest iteration of the same old kind of evil that’s always thrived in Gotham’s shadows, something Mother Panic and a few relics of the old Gotham – like a dispirited Joker – still understand. (Jody Houser, Ibrahim Mustafa, Jordan Boyd, Marissa Louise, DC Comics) 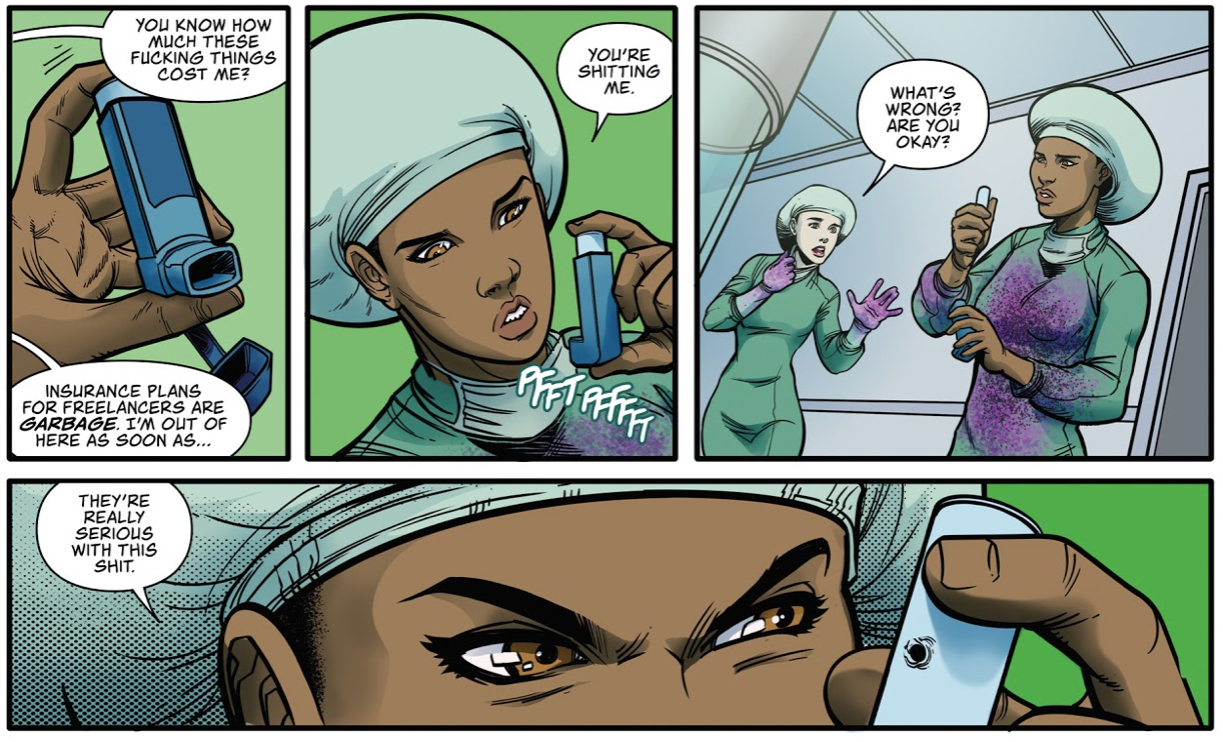 Anyone who’s living with a chronic illness requiring that they take prescription drugs knows the infuriating agony of making their way to the pharmacy to pick up their meds … only to learn that their insurance, or lack thereof, means that they have to pay an arm and a leg just to survive.

That’s a reality that Scout Turner, a freelancer for a huge pharmaceutical company, knows all too well given her line of work and a lifelong battle with asthma.

Scout understands that the outrageous co-pays on her inhalers are the result of a multi-pronged problem tied to both the nature of the country’s flawed healthcare system and big pharma’s obsession with profits over people.

But her experience is unique in that the company she works for specialises in developing new drugs that use materials collected from cryptids like chupacabras and succubi to develop its products.

As Breathless begins, Scout’s dismayed to learn that her recently-purchased albuterol inhaler has a puncture in it, but her entire life takes a sharp turn when, while dissecting a newly-captured specimen, she’s exposed to a strange gaseous substance accidentally released from the creature’s chest.

After breathing the gas in, Scout realises that her asthma’s seemingly cleared up, signalling that the creatures might just be the key to her company’s latest miracle drug.

But in the same way that the Umbrella Corporation swears up and down that it’s behaving and just trying to keep people safe, Scout’s company soon gets involved with a danger (potentially of its own making) that could end up throwing the world into complete chaos. (Pat Shand, Renzo Rodriguez, Mara Jayne Carpenter, Black Mask Studios)

The interesting thing about Valiant Entertainment as a publisher is that, for many of the characters who star in new reboots of classic characters, there’s often decades of canon history that, for newcomers, can seem like something of a barrier to entry. No matter how many assurances that a revamped series is easily accessible, there’s always that concern that it won’t be.

Thankfully, that’s not at all the case in Andy Diggle’s new Shadowman series, a continuation of the original Valiant classic starring Jack Boniface, the original Shadowman, and Alyssa, his newest and most begrudging ally.

As the series opens, Alyssa’s making her way deep into the New Orleans bayou in search of something she knows is only going to lead to trouble. There’s a dark rot spreading through the magic of the city that’s poisoned the water supply and, armed with protective amulets and weapons of her own, she sets out on a mission to investigate.

But, as Alyssa explains to the guide she pays to bring her deep into the swamp, New Orleans may be big, but it’s never easy. Her journey soon brings her face to face with the literal demons of her past – the very same supernatural apparitions she once thought she’d left behind.

Alyssa’s spells and wards are barely enough to keep the beast at bay and she realises that she has to tap into the power of the Loa, the gods of the Haitian voodoo pantheon if she wants any hope of surviving. (Andy Diggle, Stephen Segovia, Ulises Arreloa, Valiant)