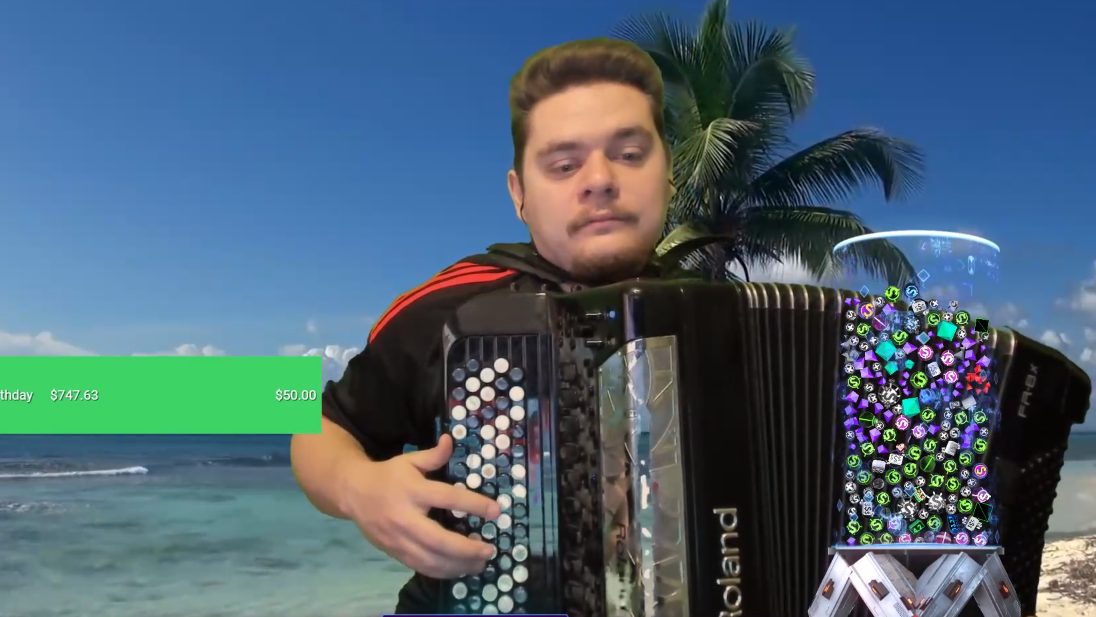 EVE Online players have a bit of a reputation in the broader online gaming community: Whether deserved or not, they are often seen as villains, bullies, and backstabbers. The rep of the Goonswarm Federation is like that times a hundred - even to the general population of EVE, they are seen as dishonourable scammers and griefers. It's a reputation that the group does not go out of its way to dispel, and generally when Goonswarm makes the news, it's not for something wholesome.

Last Saturday, a Goonswarm member found his way to the Twitch channel belonging to mozg888vadim, a streamer who is dedicated to sharing his special talent with the world: the accordion.

Vadim was playing and hoping to earn tips so he could buy small birthday gift for his sister, taking requests from his audience of about 10 people and happily enjoying his night, with no idea what was coming.

Over the next several hours, Vadim would play willing host to hundreds of Goonswarm Federation players. Eventually, thanks to a post on the EVE subreddit, all sorts of players began joining.

As his viewer count exploded, Vadim took requests of all kinds, including EVE-specific parody songs - most notably "Little Bees," a Goonswarm-inspired riff on The Beatles' "Let it Be" - and even gave the trolls some of their own medicine by promising to play a Star Wars-themed request, even putting on a Darth Vader mask, before launching into "Never Gonna Give You Up."

By the end of the night, Vadim had nearly $US750 ($977) in tips and the viewer count had peaked somewhere around 500 people. I tracked down Klavas, the player who originally found the channel and helped to orchestrate the raid, and asked him why it got such a strong reaction.

"Honestly Vadim did all the work, he got one person hooked and after I shared it he had the same effect on a ton of goons and other players alike," Klavas said.

All in all, the raid was considered a success, and throughout the following week players of the Goonswarm alliance have still been seen frequentingthe Twitch channel. It has become a bit of a cultural phenomenon inside of that particular player alliance, according to those familiar with their internal chats. Vadim's stream motto is "Be Happy" and it's infectious.

It's refreshing to see that, on occasion, even notorious trolls can be a part of something wholesome.