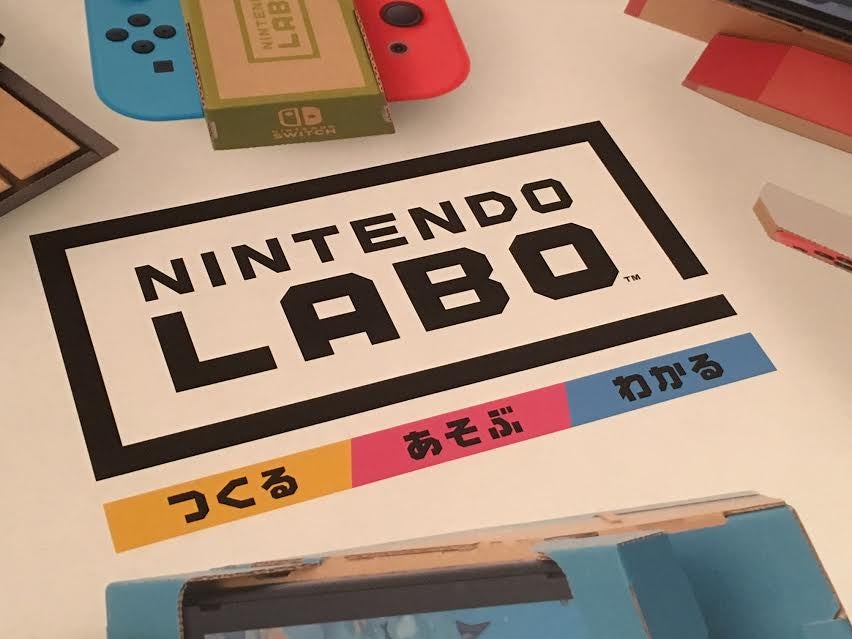 It’s a Saturday afternoon in Osaka. My two youngest sons are sitting at the kitchen table, pulling out sheets of cardboard to make Nintendo Labo. The older of the two, who is eight, is looking at the instructions, making sure he’s got the folds just right. This all feels familiar.

Nintendo Labo is universal. It should appeal to kids and adults all over the world, but the way several of its intrinsic elements line up reveal much about the country in which it’s made. This is only natural. 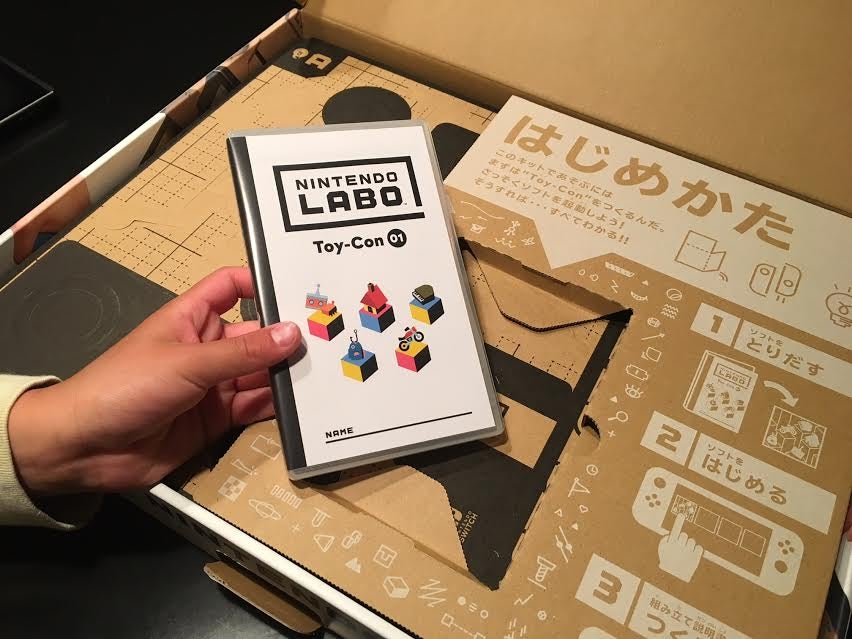 When Labo was announced, the consensus what that it was a most unusual idea. But it’s one that especially makes sense here in Japan, where papercraft is part of the culture. Many children grow up getting packets of beautiful folding paper and detailed origami books to make increasingly complex creations.

Even hopefuls aiming to become Japanese astronauts are required to fold paper cranes as part of the selection process.

Origami teaches children to be precise, to do things correctly and to follow instructions. It also opens their imagination and gives them creations made from a delicate material that can easily be torn. The act of making origami is, generally speaking, how children play. The focus is on the process.

Even though some origami is designed to be displayed, there is origami that children make and play with, like this baseball glove, ball and bat set. 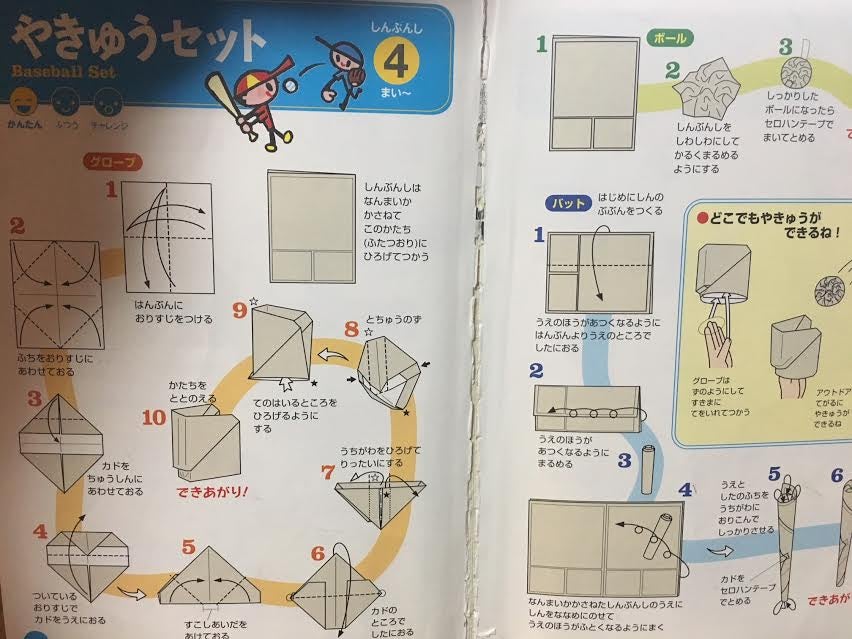 A well-worn section of my children’s origami book.Photo: Brian Ashcraft

While the above example is clear, some origami books aimed at kids are not, because the illustrations can be hard to suss out. The Nintendo Labo UI is one of the easiest to follow I’ve seen because even the instructions are interactive. They feel like game-like. Nintendo should release an origami game in which you fold real paper, but use this terrific UI.

Other Nintendo products, while designed in Japan, are outsourced for manufacturing. On the side of the Nintendo Labo box “Made in Japan” is proudly written. This is probably for a variety of reasons, including the high-quality cardboard and printing, but I believe that it’s also because Nintendo Labo defines so much about the Japanese character.

Nintendo Labo can get fiddly, like building models. Of course, that and the other examples listed here are not exclusive to Japan. However, Japan is a country in which “fiddly things” requiring detail and patience often seem to be embraced, obsessed over and perfected.

The same is true with taking care of things, which is one of Nintendo Labo’s underlying purposes. Cardboard, while sturdy, is not indestructible like so many Nintendo products seem. But it’s not the most fragile thing Nintendo has ever released. This is a company that got its start making playing cards, which, if not used properly, are susceptible to wear and tear.

With the Nintendo Labo, the lesson is to take care of the things you make. If you do not, you cannot play with it anymore. (Or at least until your parents order new cardboard parts.) It’s a small lesson, but life for kids in Japan is filled with small lessons. 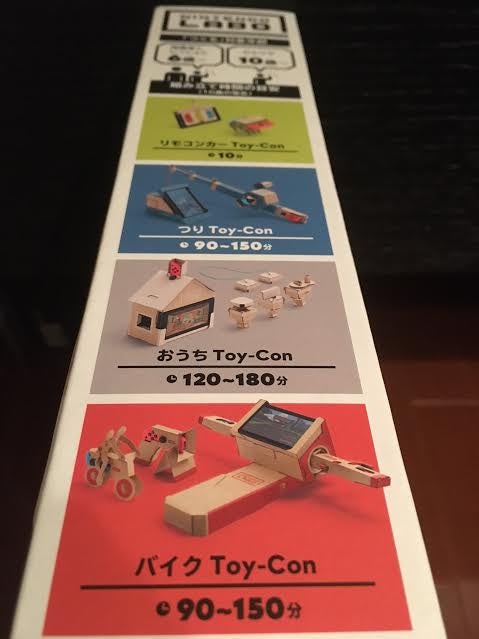 Starting in pre-school, they are packed off to school with what I initially thought was an unnecessary amount of stuff: a cup (which is put in a bag), a bento (also in a bag), utensils (in the previous bag), a small wet hand towel (in a case in the previous bag), a towel to dry off one’s hands, a hanky, special indoor shoes (these must be brought on Monday and taken home on Friday), a notebook to communicate with the teacher, and a thermos.

I am sure I am forgetting something. Oh, school books. When I was a kid, I never had this much stuff to keep track of! The stated purpose of all this stuff is for use at school, but I’ve always wondered if it was also to foster a sense of responsibility. I am certain that is why grade school kids must clean up their classroom as well as the school’s restrooms instead of pawning those duties off on janitorial staff. If you have to pick up after yourself, you might make less of a mess.

Likewise, if you are playing with a peripheral that could easily be destroyed, you might treat it differently.

I do not know if the Nintendo Labo was designed to explicitly teach children these things. Honestly, I doubt it. I’m more inclined to believe that its creation was based on interesting ways the Joy-Con could be used, coupled with the fact that kids everywhere like playing with cardboard. But it does teach lessons that children in Japan are taught as well as the lessons children are taught all over the world.

Nintendo Labo is at once very Japanese and very Nintendo and yet completely global. The same is true of its best games and experience. This is the genius of Nintendo. 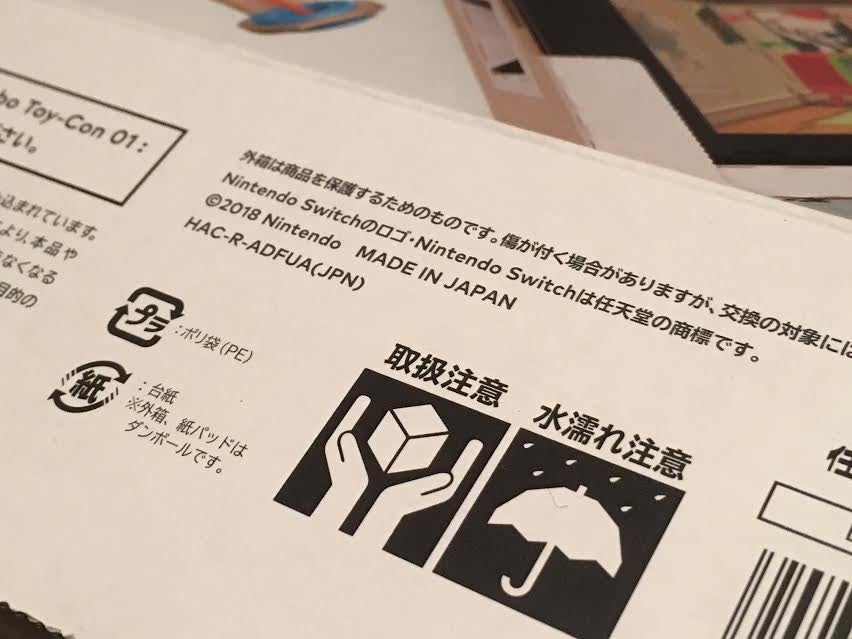 I’ve played games that have reminded me of living in Japan, even allowed me to wander around recreations of famous places or bygone eras. But I can’t recall a game that has connected my life in Japan in such a tactile and tangible way. Other games are evocative. Nintendo Labo is concrete.

After my two younger kids and I finished building the house Toy-Con, they both sat on the sofa, playing. “Please be careful,” my middle son said to his four-year-old brother. It was a real concern. If the two of them suddenly had a fight and started tugging at the Toy-Con, they would destroy it.

If the younger kid is too rough, he could accidentally wreck it. The concern isn’t the same you’d have with children handling expensive objects. This is cardboard. It’s expensive. But it can be destroyed.

My youngest son was taking care not to damage the cardboard. But he was also having fun playing, getting good presses on the block button. I didn’t have to chime in. He carefully took out the button block and replaced with the crank, turning it over and over again.

“I’m not going to break it,” he told his other brother. Even if he does, that’s another lesson to be learned.