assassins creed originskotaku game diary
To sign up for our daily newsletter covering the latest news, features and reviews, head HERE. For a running feed of all our stories, follow us on Twitter HERE. Or you can bookmark the Kotaku Australia homepage to visit whenever you need a news fix.

Assassin’s Creed Origins protagonist Bayek and his bird Senu. You know, the bird does a lot of the work identifying who in the game is an enemy. Hope that bird has been a good judge of character.

I’ve killed many Egyptians and Romans in Assassin’s Creed Origins, a game I’m 96 assassinating hours into. I’m not sure all of them deserved it. I’m feeling particularly bad about this captain I just killed.

I’ve figured some of the soldiers standing near treasures could have been nice people, but they must have known what they signed up for when they decided to stand next to a chest containing a level 23 shield, right? I needed that shield.

Don’t need it anymore, now that I’m level 55, but at the time, yeah. How else could I have helped the good people suffering under Ptolemy’s rule?

I’ve felt bad about some of the characters I’ve had to kill in order to proceed through some quests. There was that guy who thought he was a god, the guy who had killed his father because his father had disowned him and neglected his mother. I don’t know, maybe some of these people deserved jail instead of a sword-skewering.

I reached peak sympathy for my enemies last night as I started the game’s second expansion, Curse of the Pharaohs. There I was infiltrating yet another enemy base, looting their treasure chests for money I didn’t need and, oh look, there was a note on a table: 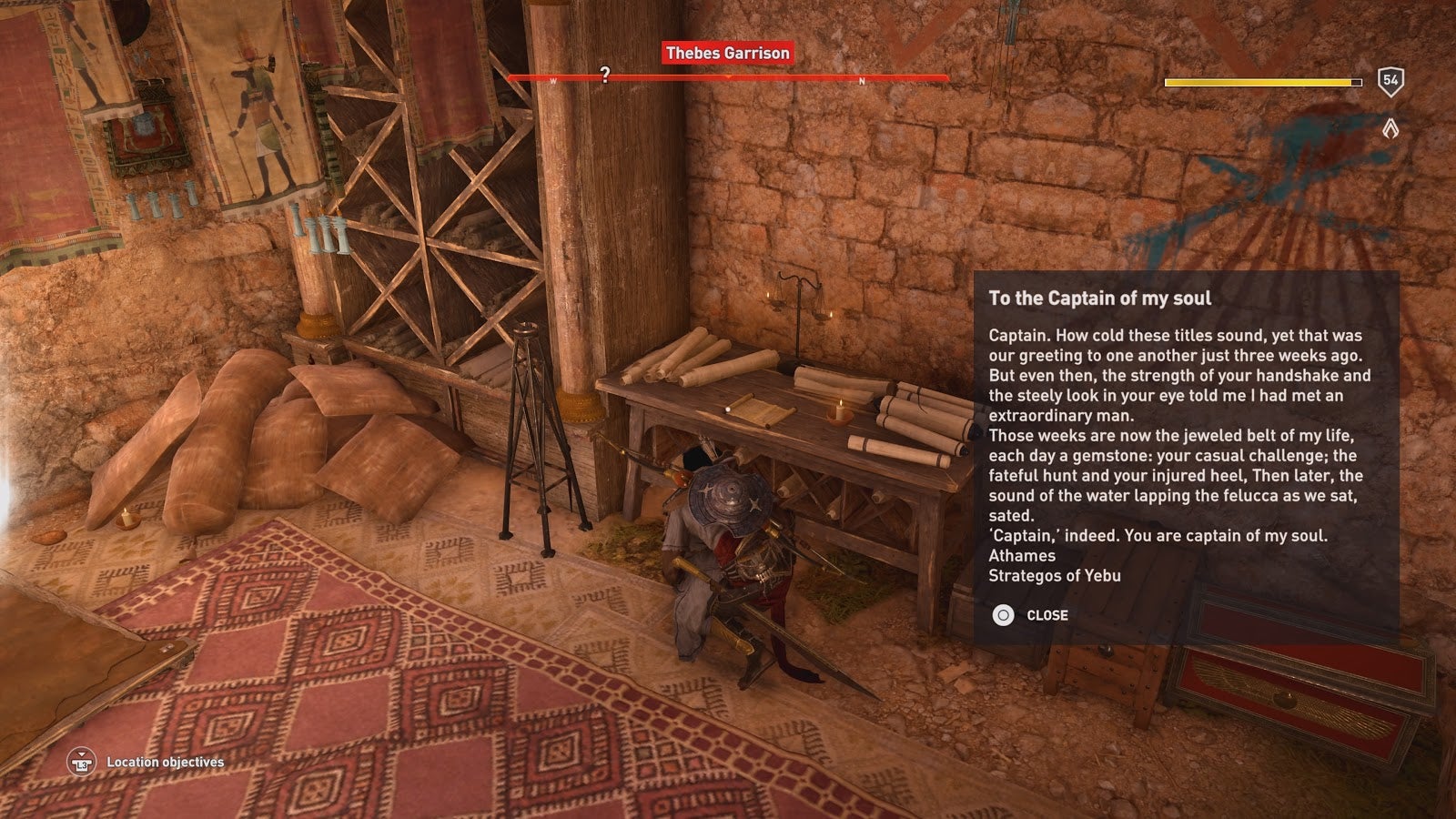 This was a love letter. From some enemy grunt named Strategos.

I did not know where Strategos was. Even if I did, there would probably be no button press that could explain to him what I had to do. Clearing an enemy base requires killing its captain, who, hey, maybe was a jerk. Enemy captains whose soldiers are in love with them can be jerks, right? I climbed to the base’s second floor, saw the captain alone on a balcony, snuck behind him and paused. Just one pause. Then I assassinated him.

I liked the moment the game had created. Sure, we’re not meant to dwell on the body counts nor on the inner lives of these enemies whose simulated lives stand between us and a few more experience points.

But I like being given a moment to role-play things a little more deeply, to feel like I’m not just controlling a video game character in ancient Egypt who kills enemies but someone who kills people who, regardless of their faults or allegiances, might experience a moment of beauty.

I might have to kill someone’s captain of their soul and still consider my character the hero. That’s a good little wrinkle.