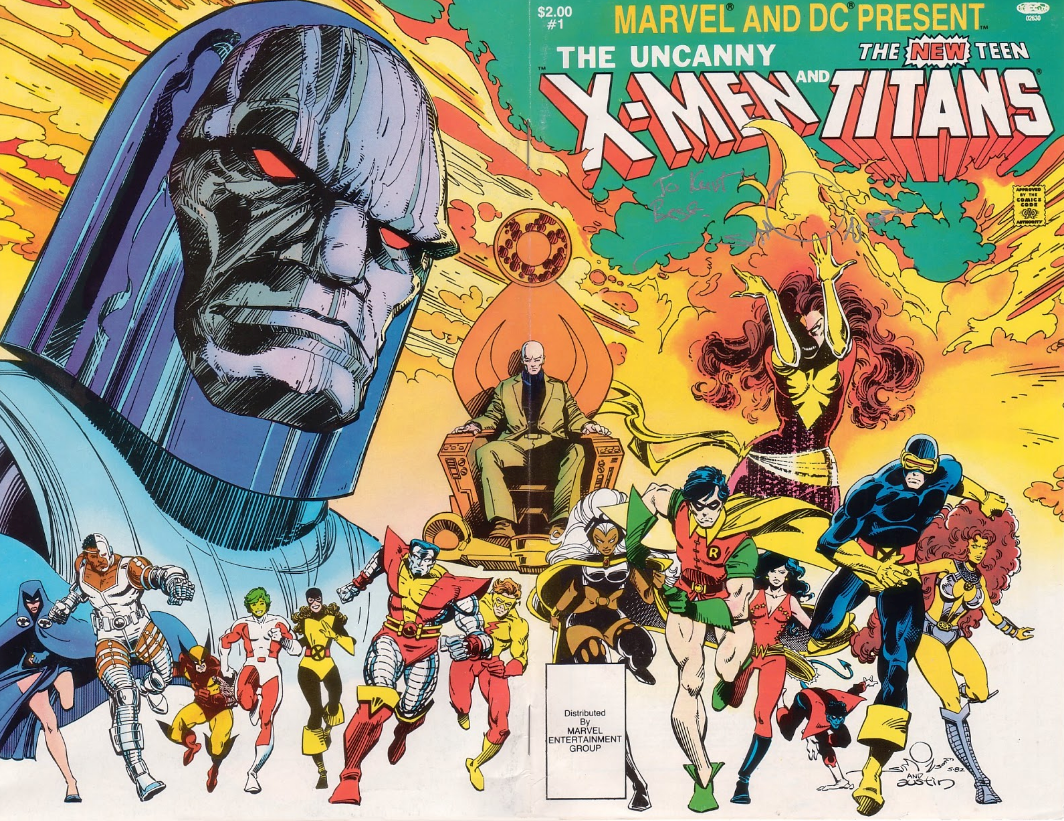 Thirty-six years ago, the two hottest superhero teams in comics met in an epic-scale single-issue story that paired the New Teen Titans and Uncanny X-Men against each other and major villains from rival universes. It’s the kind of project that seems like a miracle for even existing.

Crossovers take a lot of energy and coordination to pull off. Part of the anticipation for Avengers: Infinity War is driven by the desire to see the machinery that the Russo Bros. are building to bring disparate parts of the Marvel Cinematic Universe together. In the longer term, the Disney/Fox merger might eventually wind up creating an on-screen X-Men and Avengers clash in movie theatres. But, even if everything is finally under the same roof, it can still take years, if it ever happens at all.

Published in 1982, The Uncanny X-Men and New Teen Titans didn’t have quite the same degree of difficulty as the aforementioned projects, but planets still had to align for the team-up to happen. The one-shot was preceded by other Marvel vs. DC comics such as Superman vs. The Amazing Spider-Man and Batman vs. Hulk, but those projects didn’t have the same lightning-in-a-bottle energy that X-Titans did. Both titles were tearing up sales charts when the crossover hit, making the companies’ willingness to collaborate all the more unusual. Typically, when a publishing entity has a hot property in its stable, the conventional thinking is to double down on success and box out competitors.

The Uncanny X-Men and New Teen Titans does the exact opposite. Marvel talent took the lead on this story, written by Chris Claremont with art by Walter Simonson, Terry Austin, Glynis Wein and Tom Orzechowski. The story focuses on Darkseid’s latest plot to rule the universe, which involves resurrecting the Phoenix. The Lord of Apokolips plans to use the sentient cosmic force to breach the Source Wall and access the energy and knowledge in the great unknown behind the barrier. In order to bring back the Phoenix, Darkseid sends his parademon minions to Earth to harvest remnants of psychic energy from the X-Men. That process causes the X-Men to have bad dreams that culminate with an apparition of the Phoenix in the form of human host Jean Grey, Cyclops’ teammate and first love who sacrificed herself to end the cosmic threat. 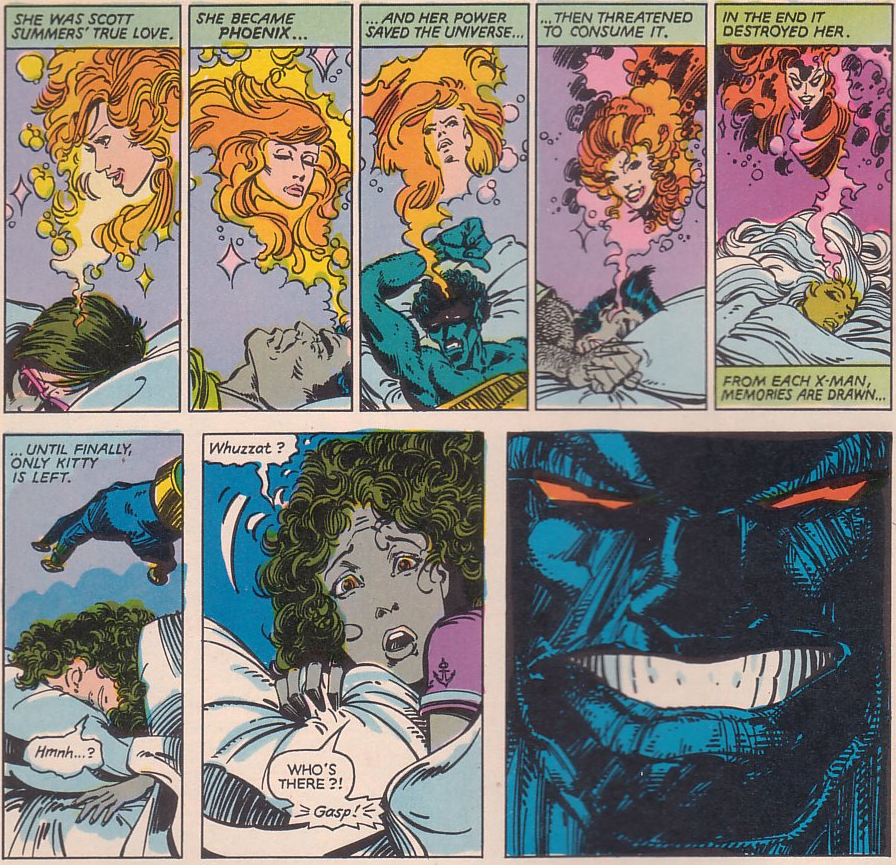 Memories of Phoenix get pulled from the X-Men. Image: Walt Simonson/Terry Austin (Marvel and DC Comics)

Meanwhile, at Titans Tower, Raven’s empathic powers cause her to be haunted by a vision of a giant fiery bird she’s never seen before. Sharing her experience with the team triggers a memory in Starfire, who heard about the Phoenix during her past life in different solar systems. Starfire tells her teammates of the Phoenix’s history as a destructive force, and sets the Titans on a path to hunt it down. 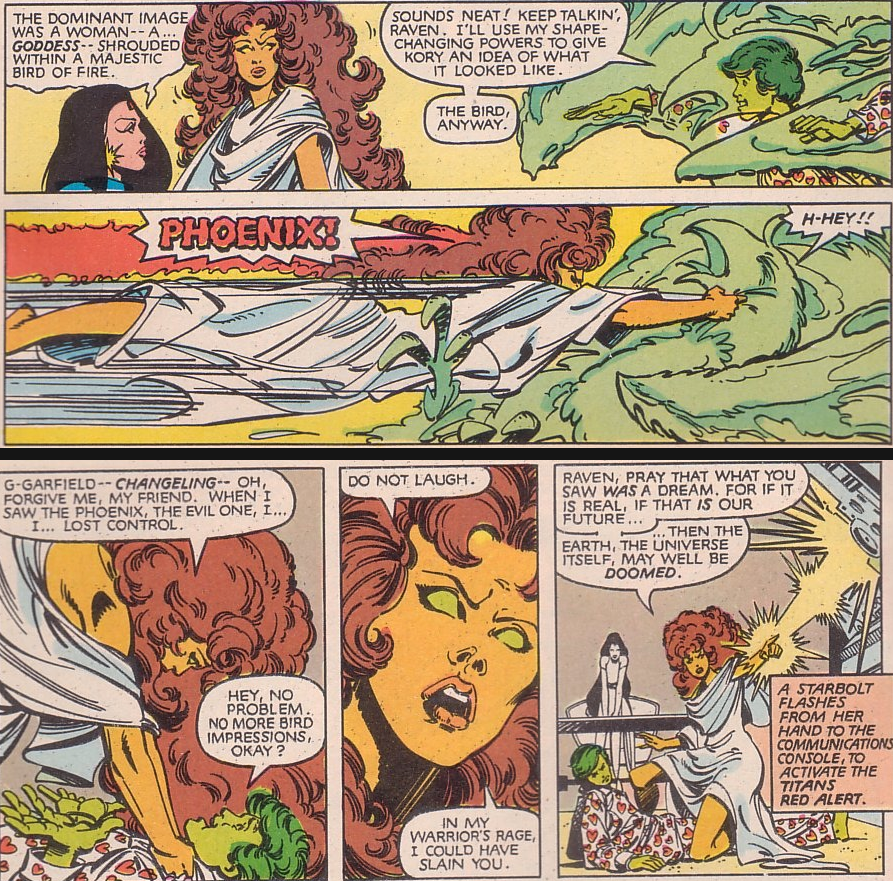 Starfire tells her fellow Titans about the terror of the Phoenix. Image: Walt Simonson/Terry Austin (Marvel and DC Comics)

This project came out when the creative core of both Marvel and DC was in New York City. Writers, artists and other creatives knew each other and hung out across the divide of rivalry. There weren’t as many degrees of separation between Claremont, Simonson, Wolfman, and the various editors and other creators. They had all had some level of rapport with each other, and it shows in the work.

The Uncanny X-Men and New Teen Titans succeeds because it infuses classic team-up conventions with an specific energy that could only come from these two teams in that particular moment. Claremont and his co-creators build the tension slowly, which benefits the story. We get cool action sequences for both teams and a sense of their melodramatic character dynamics, along with glimpses of the plot mechanisms that will bring them together. For example, Raven’s prophetic dream climaxes with the Phoenix destroying the avian representation of her soul self. It’s two giant cosmically-attuned birds fighting, a perfect symbolic representation of the clash to come. 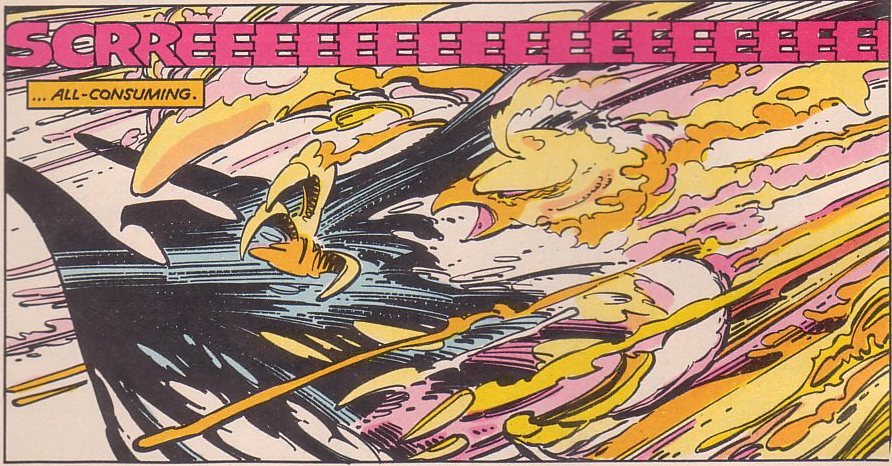 Raven’s soul self gets attacked in her dream about the Phoenix. Image: Walt Simonson/Terry Austin (Marvel and DC Comics)

The expectation in virtually all comic book crossovers is that the heroes will fight each other, but The Uncanny X-Men and New Teen Titans never stoops to merely fulfil expectations. The encounters between Deathstroke and Wolverine remind readers that these men share many similarities – super-skilled fighters who are trash-talking mavericks – but that they’re on opposite sides of the moral spectrum. The puppy-love flirting between Changeling (Beast Boy) and Kitty Pryde, the cross-team banter, the meet-cutes and meet-brutes – they’re executed in a way that makes it all feel momentous. Simonson gives plenty of stunning, widescreen perspectives, and his masterful angular draftsmanship gets a touch more rounded with Austin’s inks. The colourwork by Glynis Wein makes the different tones of earthbound and cosmic drama sing throughout. 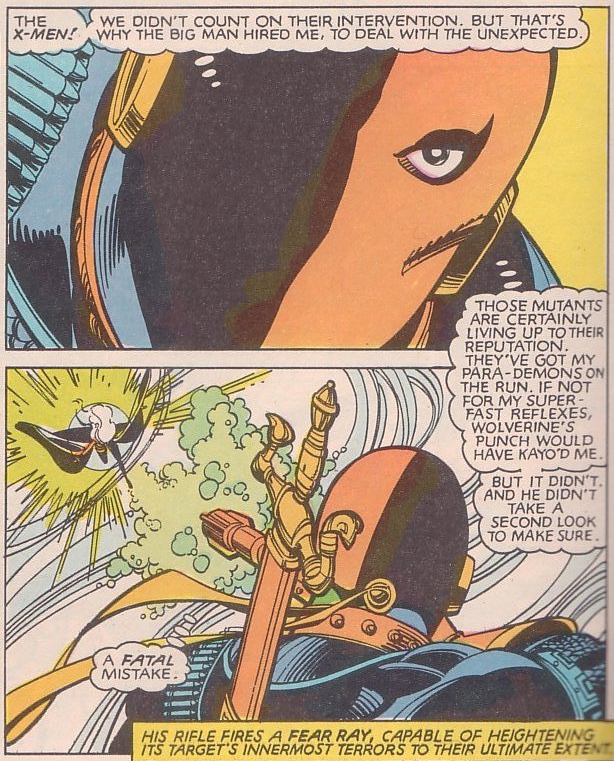 The most astonishing thing about X-Titans is how much it covers in a 64-page, done-in-one story. It even operates on the premise that the two teams exist in the same world so there’s no need for any cosmic crossover mechanism. 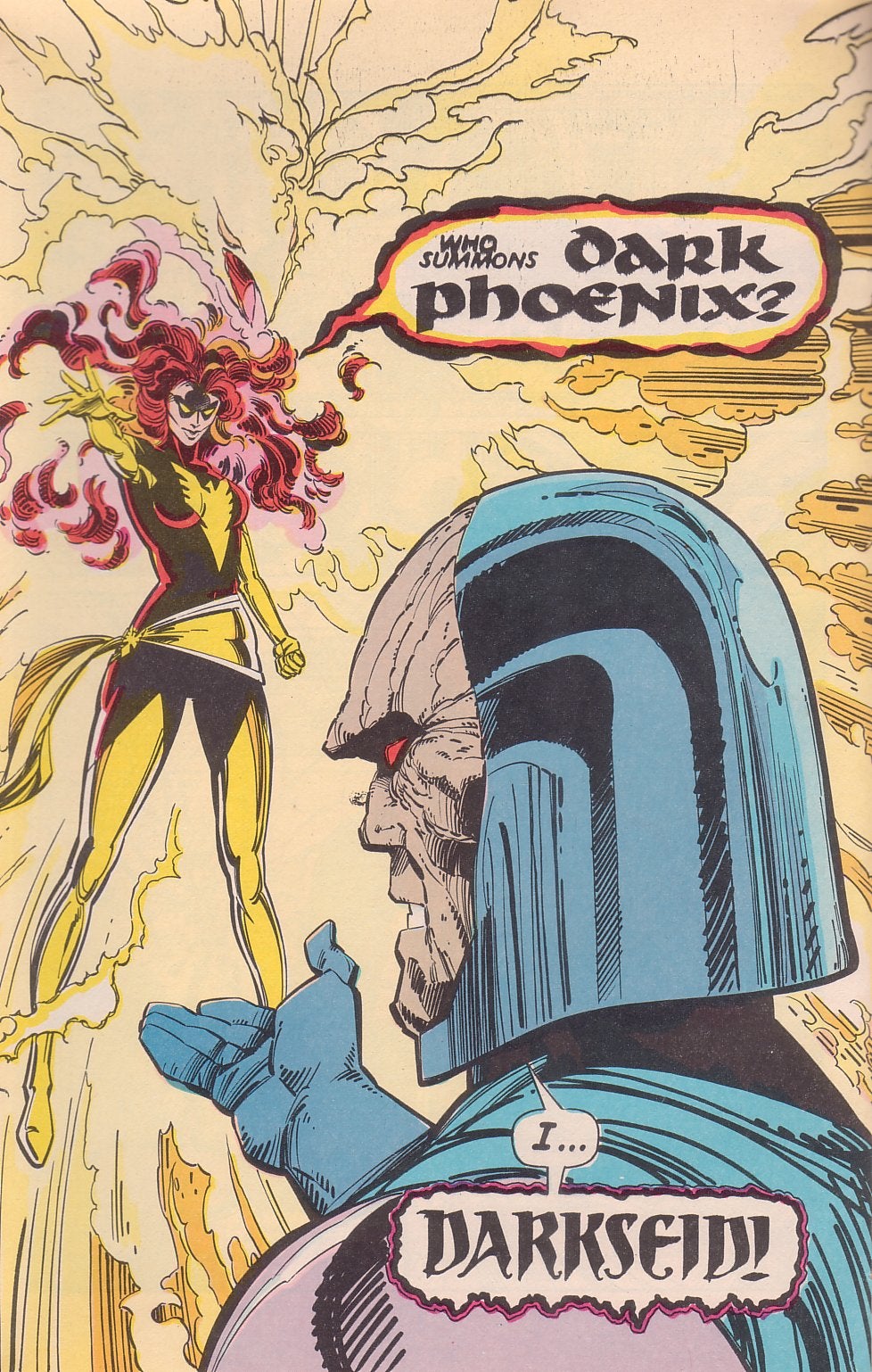 If it were coming out today – highly unlikely given the way that the Marvel and DC rivalry has shifted – it’d probably be a multi-month event with a lot of tie-in series. It’s almost impossible to read The Uncanny X-Men and New Teen Titans via legitimate means, and reprinting it is presumably more effort than either Marvel and DC want to take on. But to this day, it’s an exemplar of a cross-company event, one that lives up to expectation in every way.