My Journey To Find Sam Fisher In Ghost Recon: Wildlands

You know which game has a huge map? Ghost Recon: Wildlands.

It took me so long to find Sam Fisher that my character’s mohawk grew out.

Last week my boss Stephen says to me, he says, “Hey, Kirk, did you see that they’re adding a Splinter Cell crossover mission to Ghost Recon: Wildlands?” And I’m like, yes Stephen, I saw that.

So then we talked for a little bit about whether or not that was actually Michael Ironside playing famed Splinter Cell protagonist Sam Fisher in the teaser, since he’d been re-cast in the last full Splinter Cell game, and also because Stephen had mistakenly thought he heard Ironside in Ubisoft’s other recent game Far Cry 5.

Turned out that it was indeed Ironside this time, and at any rate, could I go find Sam Fisher in Wildlands and see what his new mission is all about?

Sure, I said. According to Steam, I had logged a bit more than 10 hours in Wildlands, though most of that had been spread across a series of unfocused co-op sessions. I’d made very little story progress, and my character had only a few upgrades. I was nowhere close to ready to take on enemies in the tougher parts of the game, and had only unfogged a couple of regions.

I looked up how to go about beginning the Splinter Cell tie-in mission, and found I would have to go to La Cruz, a region I hadn’t even visited yet.

Step one: Get to La Cruz. I began to travel southeast and immediately hit a few snags.

For starters, I didn’t have a helicopter or any way of summoning one. I set a waypoint for a nearby enemy outpost, which appeared to be housing a helicopter I could boost. I arrayed my guys around the enemy, recalling in the process how to play this game. Send up a drone, tag the bad guys, sync up my team’s sniper shots, shoot the dudes, win.

Oh, yeah, that’s right. This game is fun, in its creepy neocon Clancyish kinda way. I immediately wished I had someone to play with, since this game is a lot better with a friend. Oh, well.

I climbed in the helicopter and set out for La Cruz. I remembered helicopter controls being pretty bizarre in this game, but they felt fine to me. Then I remembered that as part of this game’s impressive, still ongoing post-release support, helicopters had been patched so they would control better. I dunno if they’re on the level of Far Cry 5‘s very good helicopters, but it was much better than the last time I flew a bird in this game.

I was flying toward my destination when I got spotted. Uh oh. 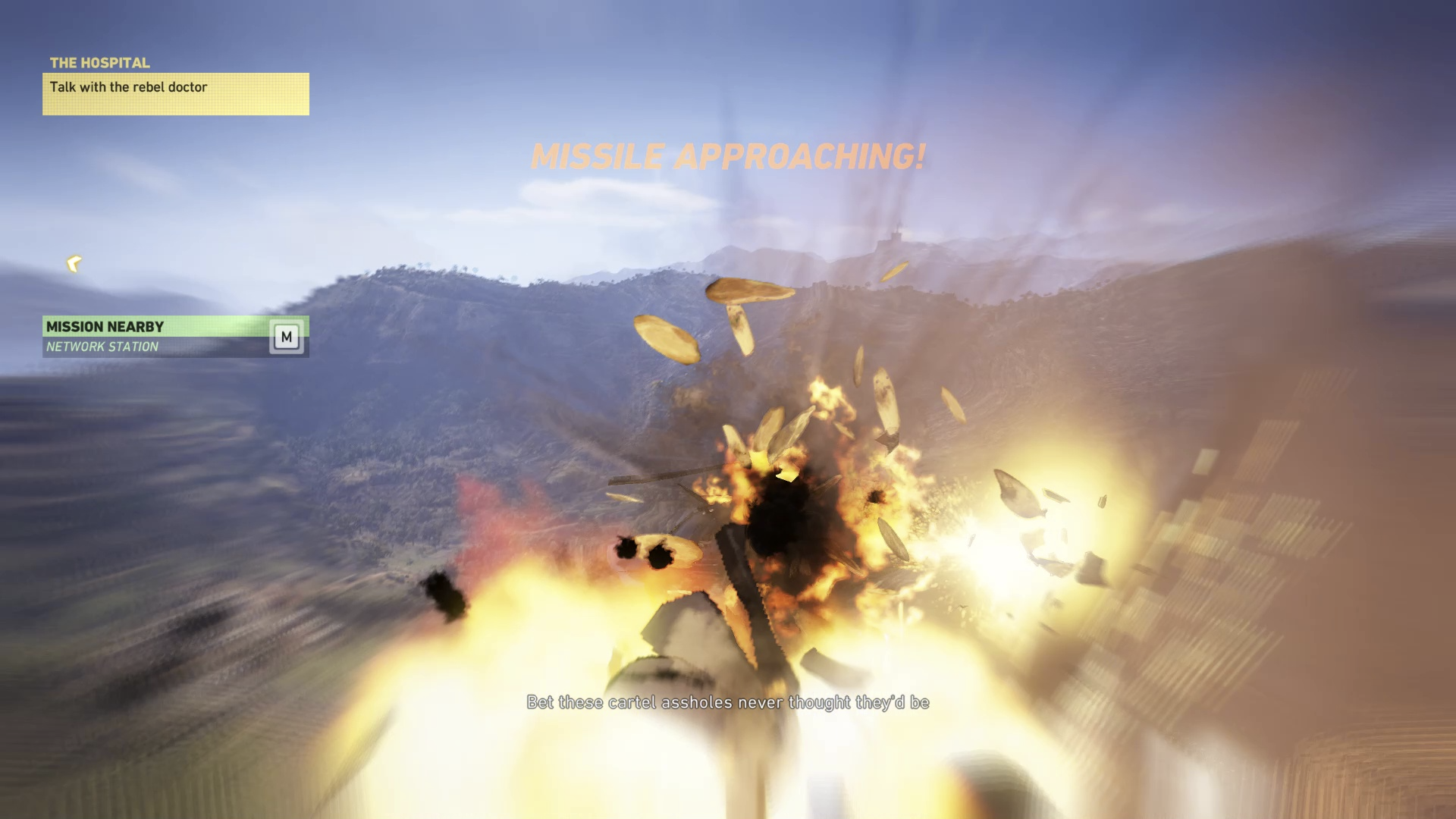 Ten seconds later, a SAM had connected with my helicopter and I was spiralling toward the earth. Game over. I respawned back near where I started. Maybe helicopters were a bad idea, I decided. I’d get to La Cruz by land, instead.

I began to make my way southeast and quickly came upon a highway with a huge fence running alongside it. How was I supposed to get over this fence? Should I just blow it up? I could’ve walked up to the next opening, but it was pretty far. I decided to hoof it to the next break in the fence.

I zoomed out to look at the map and, holy shit, I was still so far from La Cruz. How is this game’s map so big? This has got to be one of the biggest open-world games ever created. I kept making my way by ground. At one point, I crossed some train tracks in advance of an oncoming train, which wiped out my team. 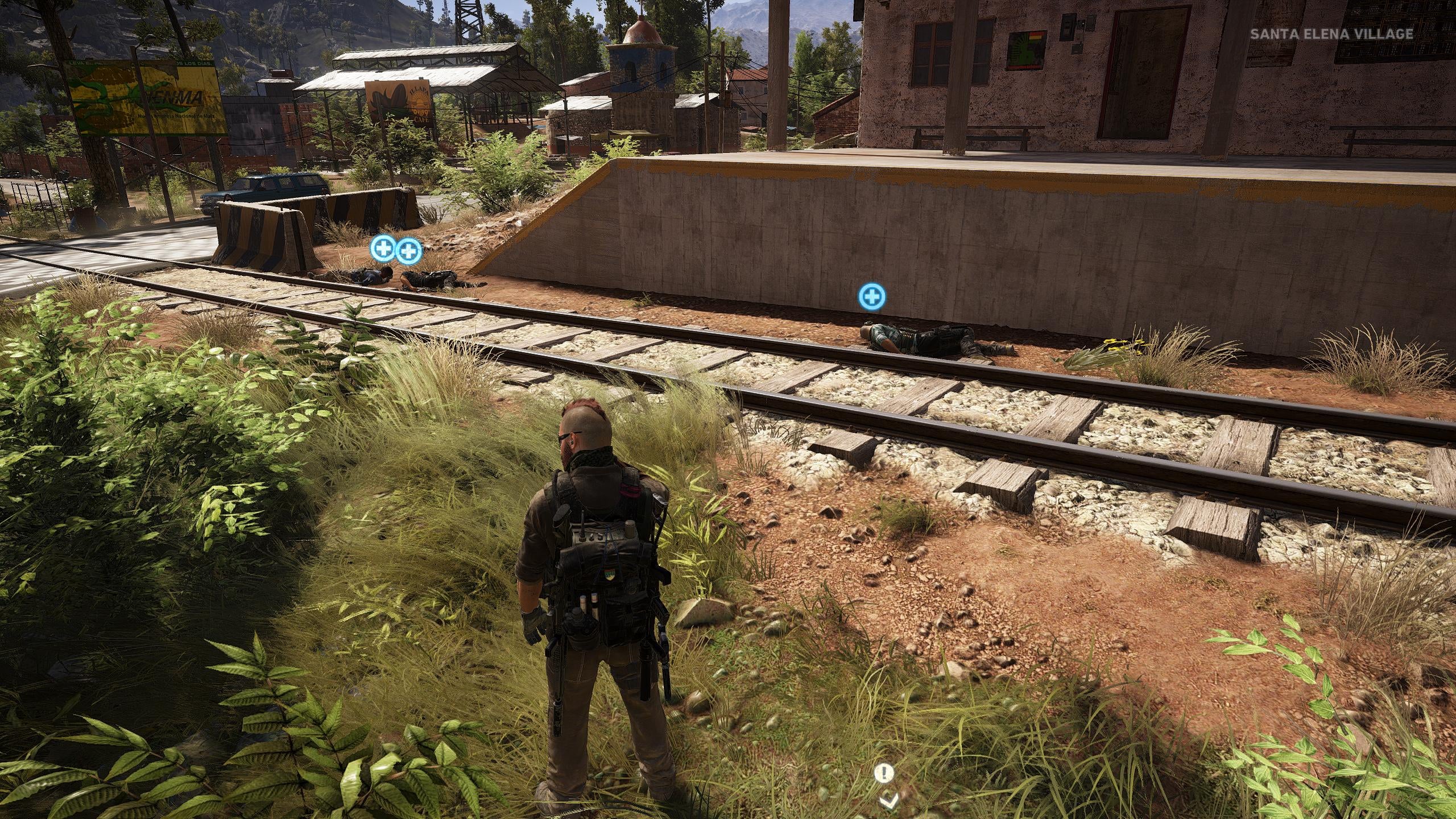 These cartel dudes should send more trains against us.

I stole a Jeep, and noticed that my squad’s heads sway in perfect unison if I swerved the Jeep while I drove. I guess they do spend a lot of time together, so it makes sense they’d be synced up.

I got sick of driving and boosted another helicopter. This time I kept lower to the ground; maybe that way I could avoid enemy detection? It worked. As I helicoptered toward La Cruz, I noticed that my teammates also bounce in their seats with the same perfect unison.

I made it to La Cruz. My handler came on the radio and told me that Sam Fisher was in the area and needed my help on a mission. He’d supposedly contact me later that night. It was day at this point, and I had no way of advancing time to night. I figured I’d just fly around for a while and explore.

Again I marvelled at scope of this game’s map. I’ve been playing a lot of Far Cry 5 recently, and that game takes place within a space the size of a single American county. Wildlands‘s recreation of the entire nation of Bolivia feels appropriately huge by comparison.

I spent a while charting a nearby wooded area that had been decimated by a forest fire, gradually ungreying additional parts of the La Cruz district. I landed and did a story mission; it was pretty fun. It was still day, so I left my guy sitting in place while time passed, hoping the sun would set. In the real word, I checked my email and caught up on some work stuff. 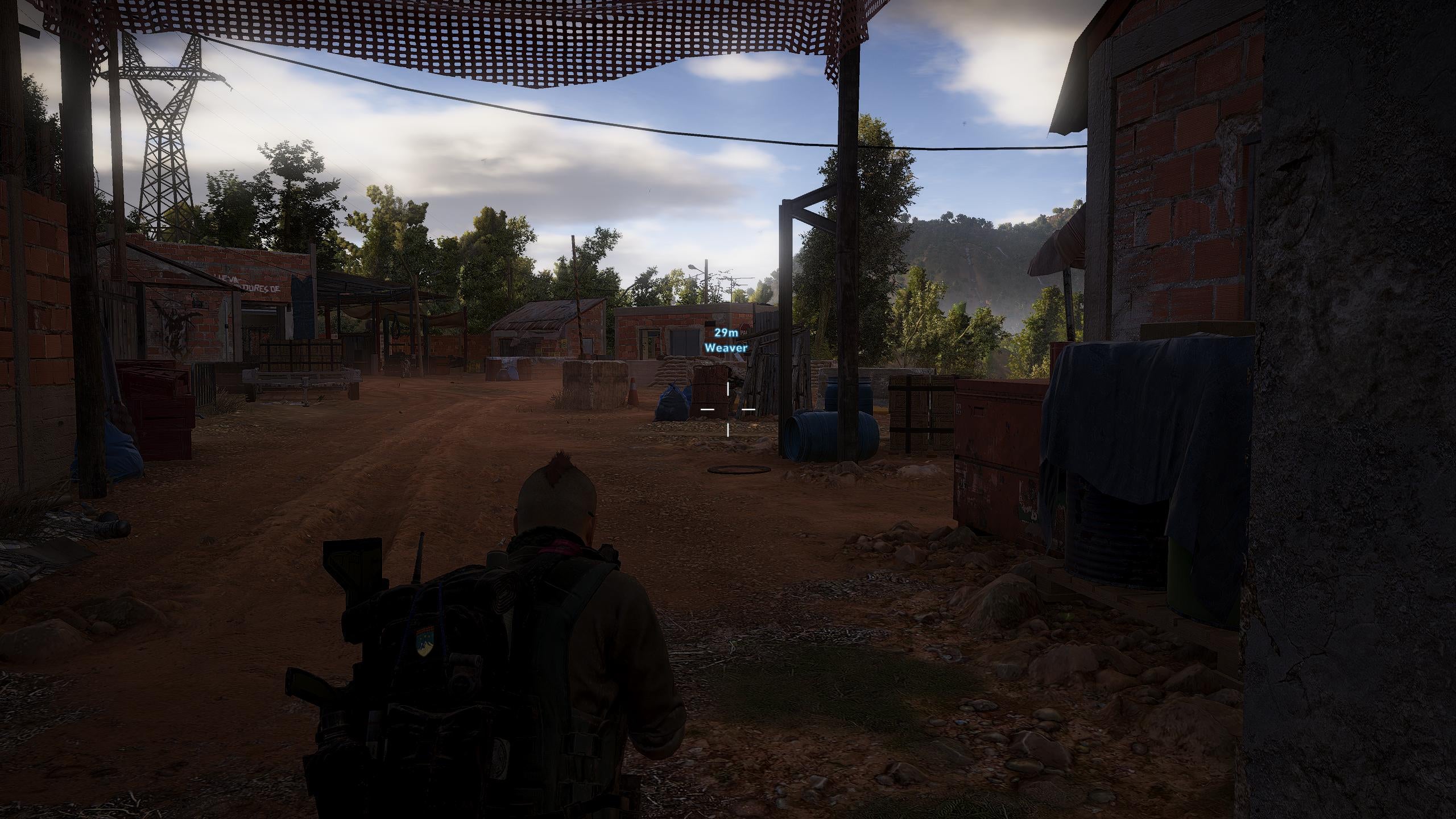 Time passed. A lot of time. Eventually, it grew dark. 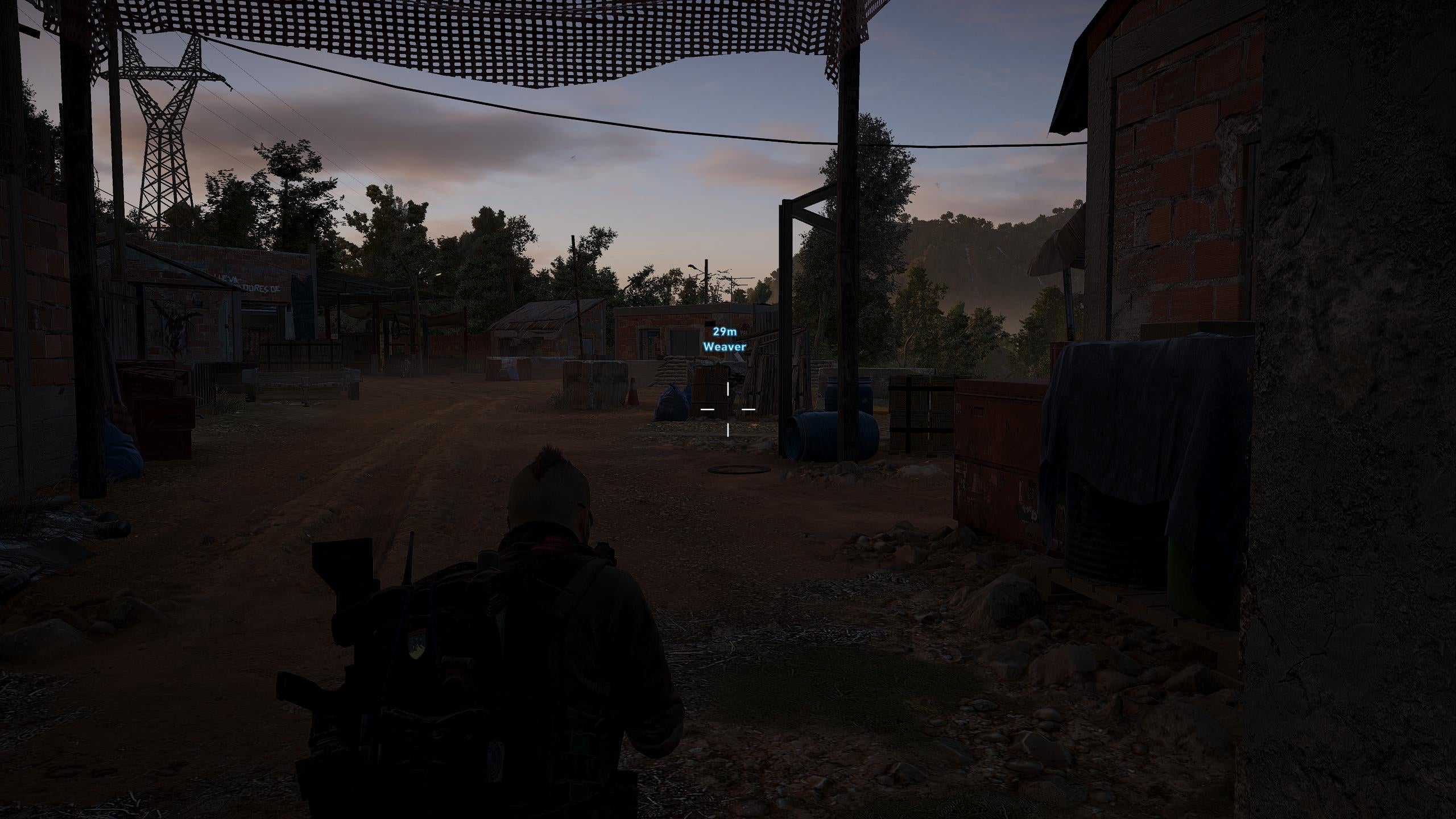 I still wasn’t sure if that was actually what I needed to do to trigger the Sam Fisher quest, but at that point it had become a matter of principle. I had vowed I would reach Sam Fisher, and I would say hello to him, and that was all there was for it.

My radio buzzed. Rejoice! It was Sam Fisher, on the comms. He told me his coordinates and asked that I come and meet him. I checked the map and saw an enjoyable custom location icon for him, fashioned like his well-known tri-lens goggles. 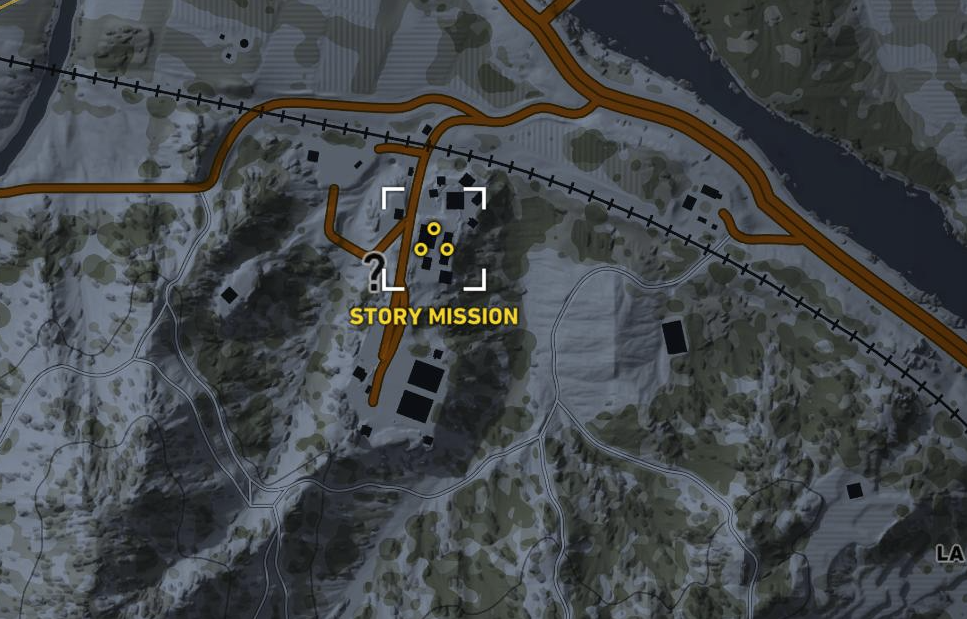 As I approached the compound Fisher had infiltrated, the mission objectives appeared in the corner of the screen. Not only could I not be spotted during this mission, I also couldn’t kill anyone.

I pulled out my aerial drone to scope out the situation and found that it had been jammed. My primary strategy for success in this game – tag dudes with the drone, then slowly snipe them as I make my way toward my objective – had been nullified. I was going to have to do this the old-fashioned way. 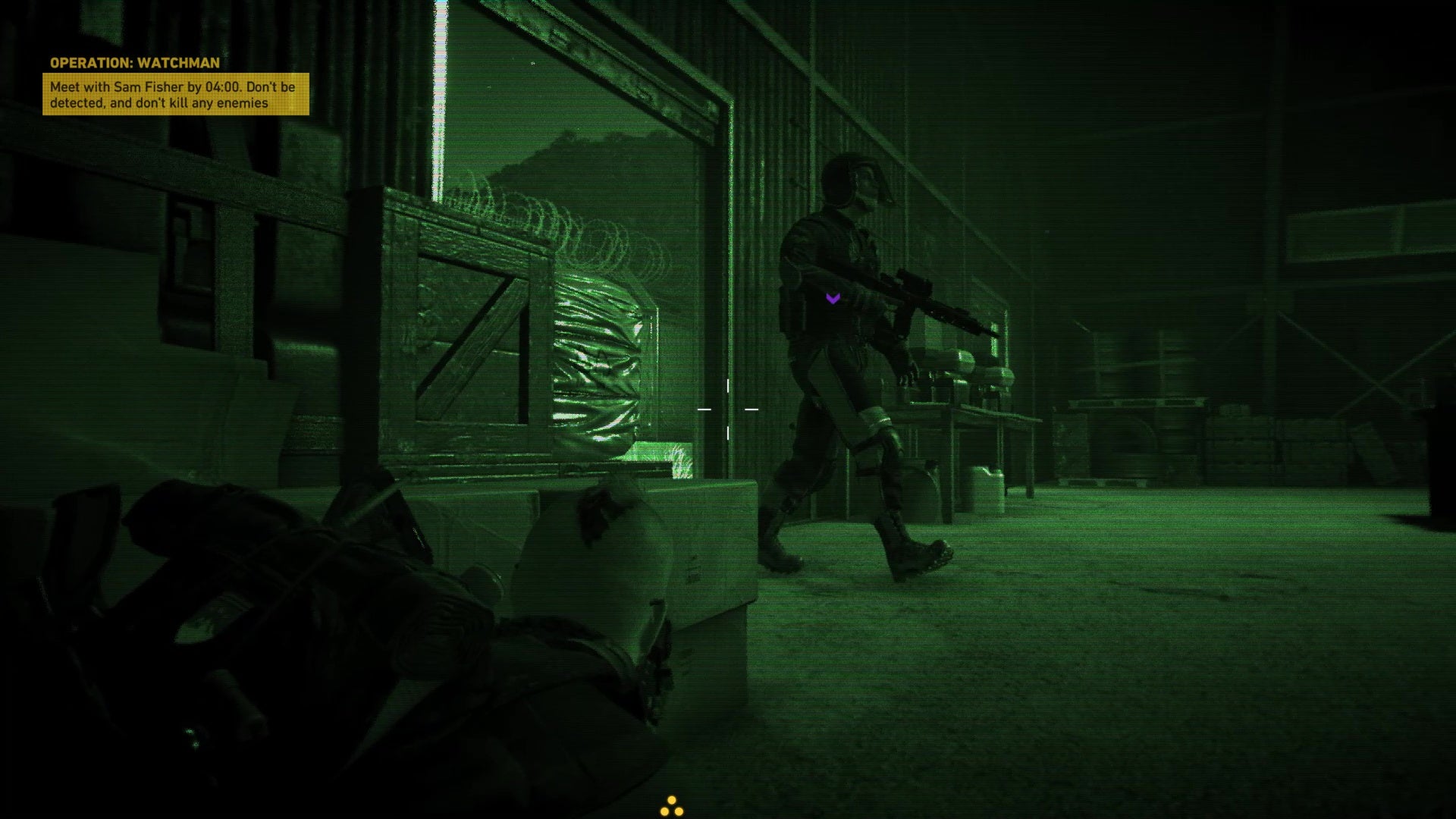 I spent the next hour or so attempting to find a clean route into the base. I was spotted and failed the mission a lot, each time wondering if I was simply screwed. Were there nonlethal weapons and other upgrades that would have made this easier, if I’d progressed further in the rest of the game? Was I simply not thinking of some easy strategy for getting to the base?

My route eventually involved going the long way ’round through the southwest corner of the base, using C4 to blow up a fence that was blocking my way (the enemy AI in this game is kinda dim about detecting explosions), and creeping into the main building through a side entrance. I made my way upstairs and there he was, the spec ops soldier with the panther purr, Sam Fisher himself. 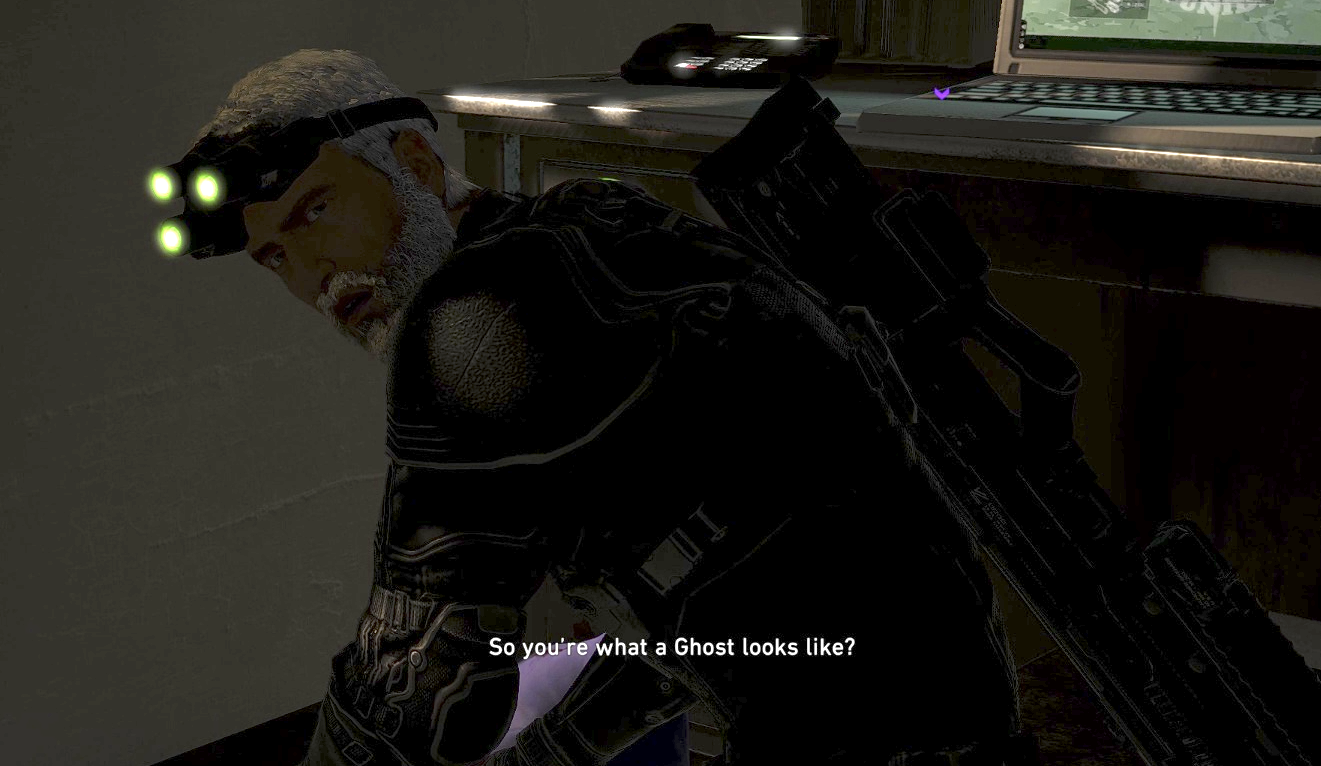 Fisher asked me to hold off some waves of attackers while he hacked a computer. My dude is pretty low-level, and I was underprepared for the ferocity of the enemy attack, plus I still had the game on hard difficulty. So, I died.

I respawned back outside the base, and the game told me I’d have to sneak in undetected all over again. No thanks, I said. I bailed, at least for the time being. I already know about the bittersweet finale of this mission, so I can wait a bit longer to see it for myself.

My journey to meet up with Sam Fisher took several hours. In that time, I was impressed all over again by the size, scope and density of Ghost Recon: Wildlands.

I’ll be back to finish the Fisher mission – gotta get those sonar goggles, even if my dude might not put them over his eyes – but I also think I’m gonna play more Ghost Recon: Wildlands in general. I’m curious to see what the developers have added to it over the past year, and what they will be adding in the year to come. I’ve vast expanses still to explore, and a newfound hankering to get out there and see what’s what.