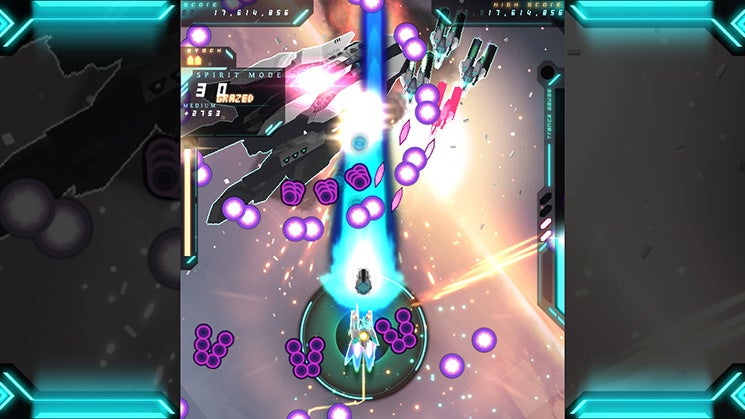 Danmaku Unlimited 3 is a bullet hell arcade game that came out for PC last year but was recently released for the Nintendo Switch. The laser-filled shoot ’em up is exciting, with tight dodges and massive beam blasts that make for a good time.

Danmaku Unlimited 3 chases after other bullet hell games like Ikaruga and the various Touhou games with its simple premise. You have a ship, there are bad guys, and those bad guys shoot everything they have at you.

The joy of bullet hell games comes from testing your awareness, seeing if you can bob and weave between attacks to survive the enemies’ onslaught. One of the major mechanics in Danmaku Unlimited 3 is the concept of “grazing,” or letting enemy bullets slide as close to your ship as possible.

As you get closer and closer to enemy attacks, you build a meter that can be spent on a massive, screen-clearing attack. There’s always a push and pull in Danmaku Unlimited 3, small segments full of narrow dodges before explosive retaliation.

To further mix up the action, players can choose to focus their usual spread-shots into a tight beam that’s great on beefier targets like bosses. Bombs that wipe everything out offer a small breather from the countless projectiles that fill the screen.

If you want to stick with screen-wide attacks, you can. If you want to do nothing but dodge and build your graze meter for the perfect moment, you can. The game becomes as easy or as difficult as you decide.

Weekly indies often have some type of hook: a socialist twist on city building, a low-poly horror game that uses film techniques to create confusion, a simulation that explains why people don’t trust each other.

Danmaku Unlimited 3 doesn’t have any other trick up its sleeve than being one of the best bullet hell games out there. If you like blowing stuff up or just feeling like you’re back in the arcade, you won’t want to miss it.