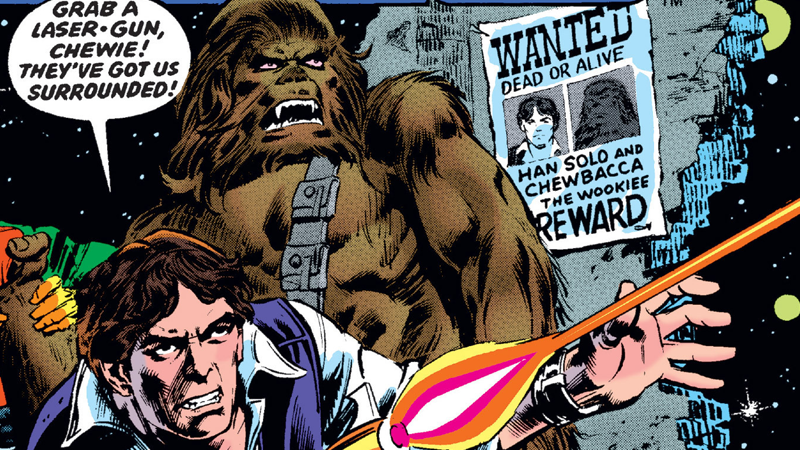 Grab those laser guns, it’s time for a shootout on the cover of Star Wars #7.Image: Gil Kane and Tony DeZuniga (Marvel Comics)

When Marvel first started its classic Star Wars comic in 1977, it was quickly faced with a challenging conundrum: how to tell tales in the Star Wars universe beyond the events of the movie. It’s no surprise that the publisher turned to Han Solo for material, but what is surprising is just how bonkers its first original storyline would get.

Yes, we’re getting Solo: A Star Wars Story in just over a month’s time, but it’s fascinating to see that even all those years ago — when the earliest stories in what would eventually become the Expanded Universe were just coming out in the months after the movie – the allure of what Han Solo’s life was like beyond being a reluctant rebel still drew creators and fans alike to new stories.

Running from issues #7-10, the first original story arc in Marvel’s Star Wars book (the first six issues were an adaptation of the movie) is a bizarre story with Han and Chewie as the stars of a Magnificent Seven-style tale about smugglers and mercenaries teaming up for a noble cause.

It’s got more in common with old Westerns and classic adventure serials like Flash Gordon than anything that’s come to define Star Wars in the following 40 years, but looking back on it, that’s part of the charm – a time when Star Wars was so new and undefined, that anything could be thrown at the wall to see what stuck. Using Han Solo as a vector, it was a look at a galaxy far, far weirder than anything we’d seen in the movie. 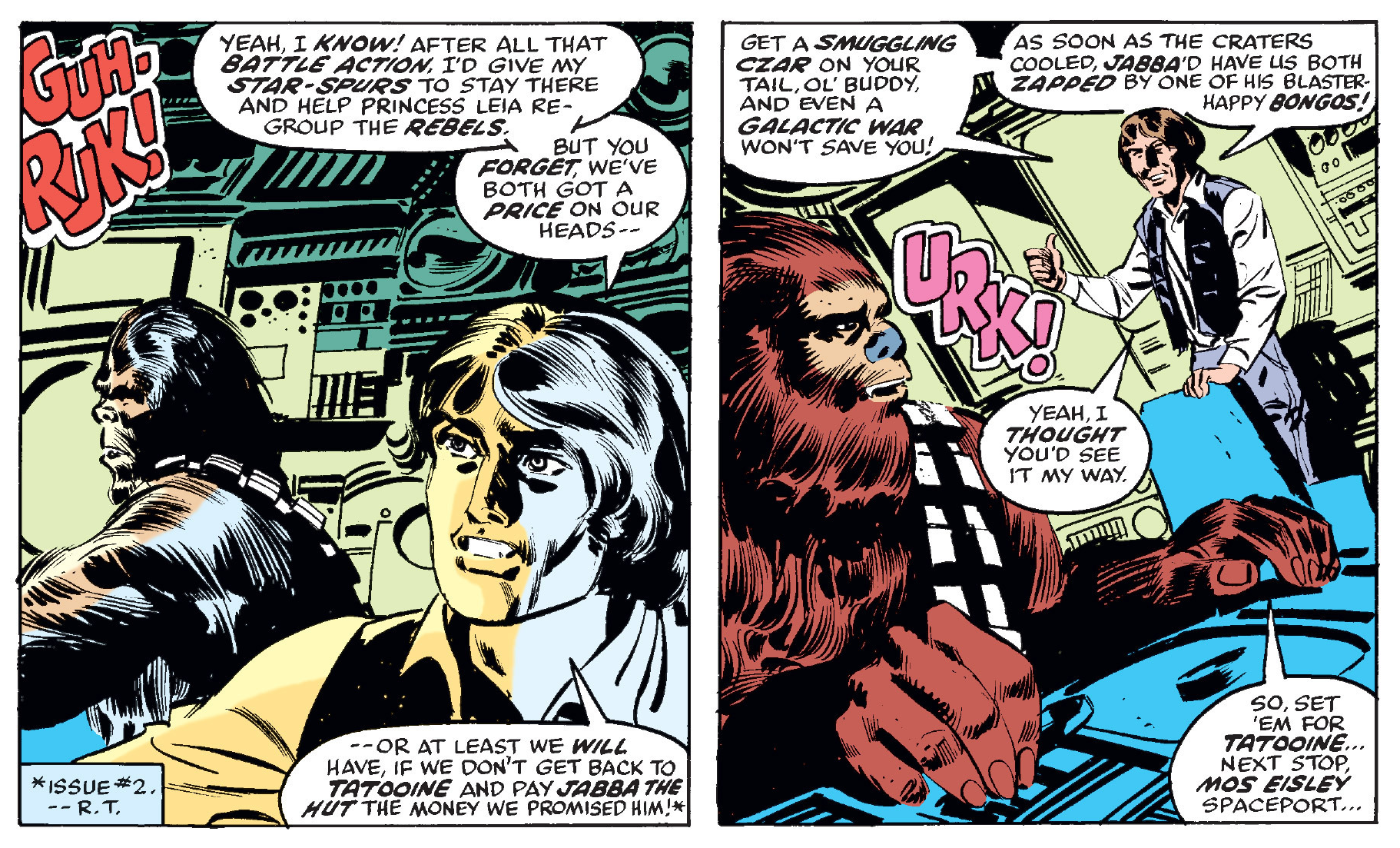 Han and Chewie make their way back to Jabba in an attempt to pay off their debt in Star Wars #7Image: Howard Chaykin, Frank Springer, Joe Rosen. and Carl Gafford (Marvel Comics)

Largely known by the title of Star Wars #8, “Eight for Aduba-3” (written and illustrated by Howard Chaykin and Roy Thomas, respectively), the story picks up immediately after the events of A New Hope.

Han, packing oodles of treasure given to him by the Rebellion for helping destroy the Death Star, takes his leave to go pay off his debts to Jabba – only to be waylaid by space pirates (a bizarre mix of laser gun-wielding rogues and, err, actual pirates, right down to the cutlasses) and have his haul stolen from him, rendering him and Chewie once again on the run from the watchful eyes of the Hutt.

It’s then they decide to hide out on the quiet world of Aduba-3, hoping to find some decent paying jobs to scrape up the credits needed to pay off Jabba.

The first issue is mostly standalone – Han and Chewie find themselves protecting an alien priest from a mob of bigoted spacers, angry at the thought of a dead cyborg being buried among humans, a fascinating bit of world-building that’s promptly forgotten about by the end of the issue – but then the story turns to Han and Chewie being recruited by a local village, who keep being harassed by a gang of bikers lead by the fabulously named Serji-X Arrogantus (if that wasn’t enough for you to get Serji-X’s defining character trait, he’s also called Arrogantus the Arrogant One, for good measure).

Despite not knowing anyone on Aduba-3, and having spent the last issue shooting at a bunch of its inhabitants, Han not only agrees to help, but decides to recruit a bunch of the “spacers” hanging around in Aduba-3’s spaceport cantina to help him. 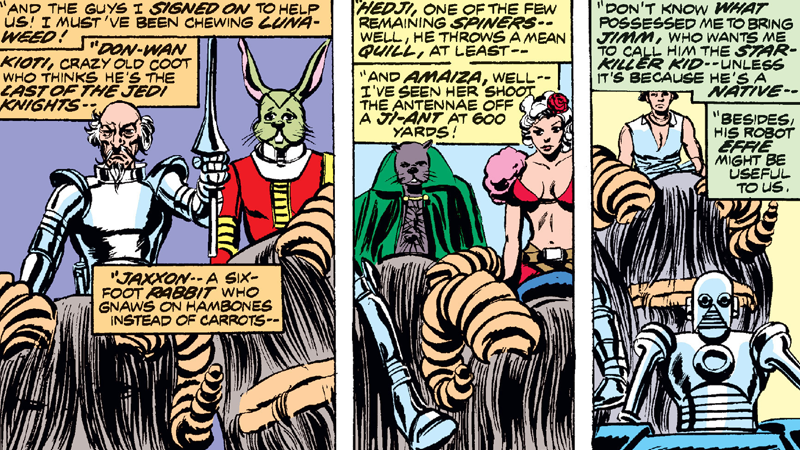 It’s here we meet a motley crew that would make the cast of Solo blush. It’s one of the weirdest collections of characters you could think of:

And then, to round out the team … there’s Jaxxon. 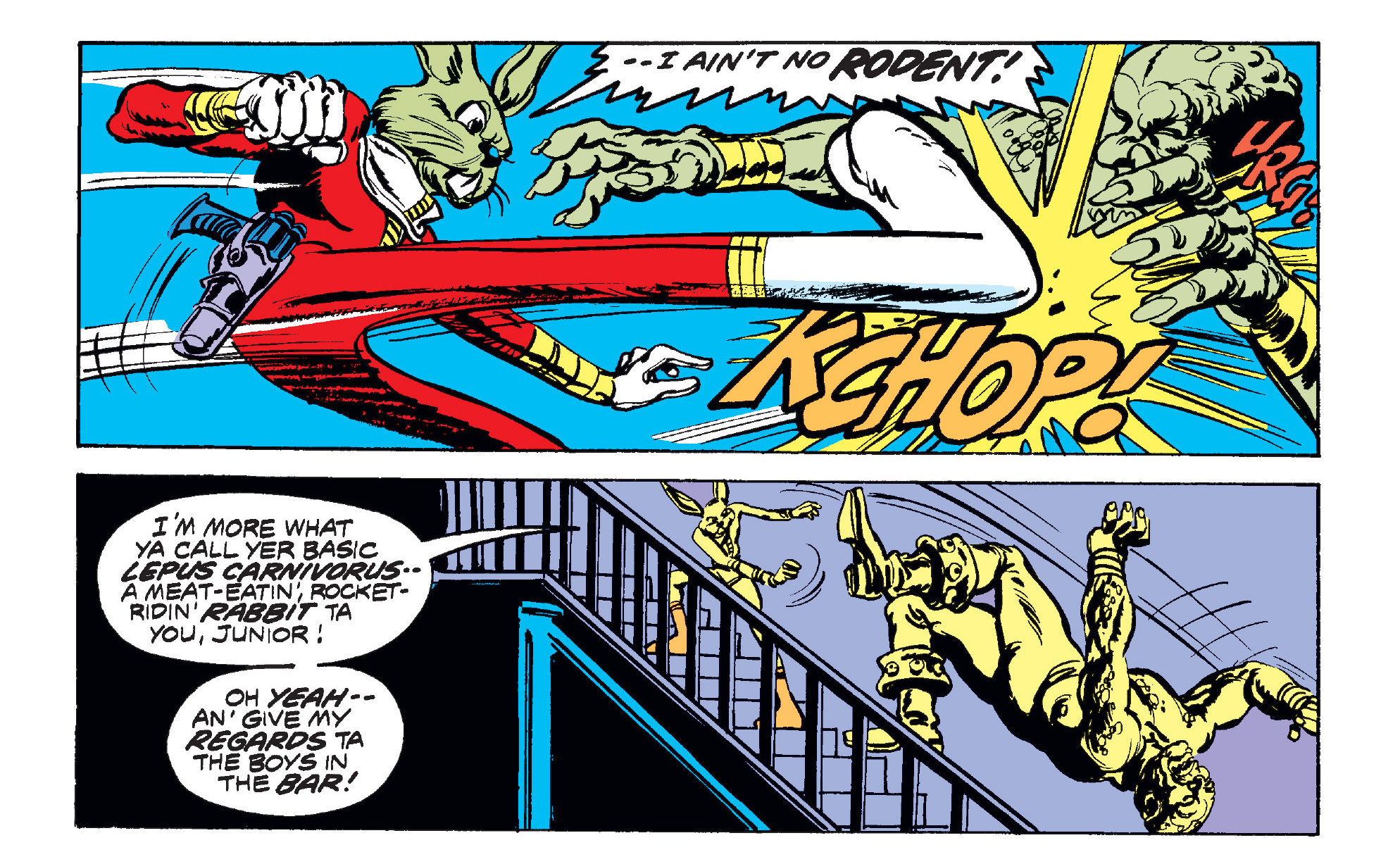 If you’ve ever heard anything about this Star Wars storyline, chances are it’s Jaxxon, a bright green rabbit with a carnivorous mean streak in a retro space suit, and one of the most infamously weird characters from the Star Wars comics.

Jaxxon was so infamously bonkers and far removed from the essence of Star Wars that George Lucas was allegedly incensed by his existence.

It’s honestly surprising that Lucas bristled at the space rabbit and not the weird Obi-Wan Kenobi knockoff that Don-Wan was, but nonetheless, Jaxxon is a prime example of how much of a blank slate Chaykin and Thomas had when it came to forging their own version of what the Star Wars galaxy looked like.

From there on, the rest of the tale is fairly typical – the scrappy gang of eight heads out for the village, intervening in a casual bird-man attack along the way, before Serji’s Cloud-Rider gang shows up for some much fiercer competition. Kihotay seemingly dies (but is quickly explained as alive again in the following issue for reasons that will become more apparent shortly, thanks to his space knight armour), but Effie definitely does, taking a blaster bolt for Jimm.

It’s all Western-y last stand sort of stuff, until Chaykin and Thomas decided that things haven’t been scifi-y enough for Star Wars, so they have a giant monster – summoned by the village’s shaman in an act of spiritual mysticism way beyond what people knew of the Force at that point – show up to take out Serji’s gang.

It naturally goes berserk even after doing that, leading to Han and his team having to take it out themselves. You might be shocked to discover Han kills it by swiping Kihotay’s lightsaber and thrusting it into the monster’s chest, but probably not. From there, the day is saved, and Han and his team amicably split their meager pay, with most of these characters never showing up again, either in the Star Wars comics or in material beyond them.

Which is sad, because in an age where the franchise is telling stories that often feel too constrained by the established parameters of the franchise, we really could use some more of the weirdness that a story like “Eight for Aduba-3” brings.

To be fair, maybe this story was too out-there for its own good. Chaykin and Thomas would move on from Star Wars at the end of the storyline – allegedly, at least for Thomas, because the fallout over Jaxxon between Marvel and Lucas led the writer to believe the Star Wars comic would be stuck in a creative quagmire until a new movie came out.

The next few stories, from the new team of Carmine Infantino and Archie Goodwin, would focus on Luke and Leia’s adventures scouting out a potential new base for the Rebels. 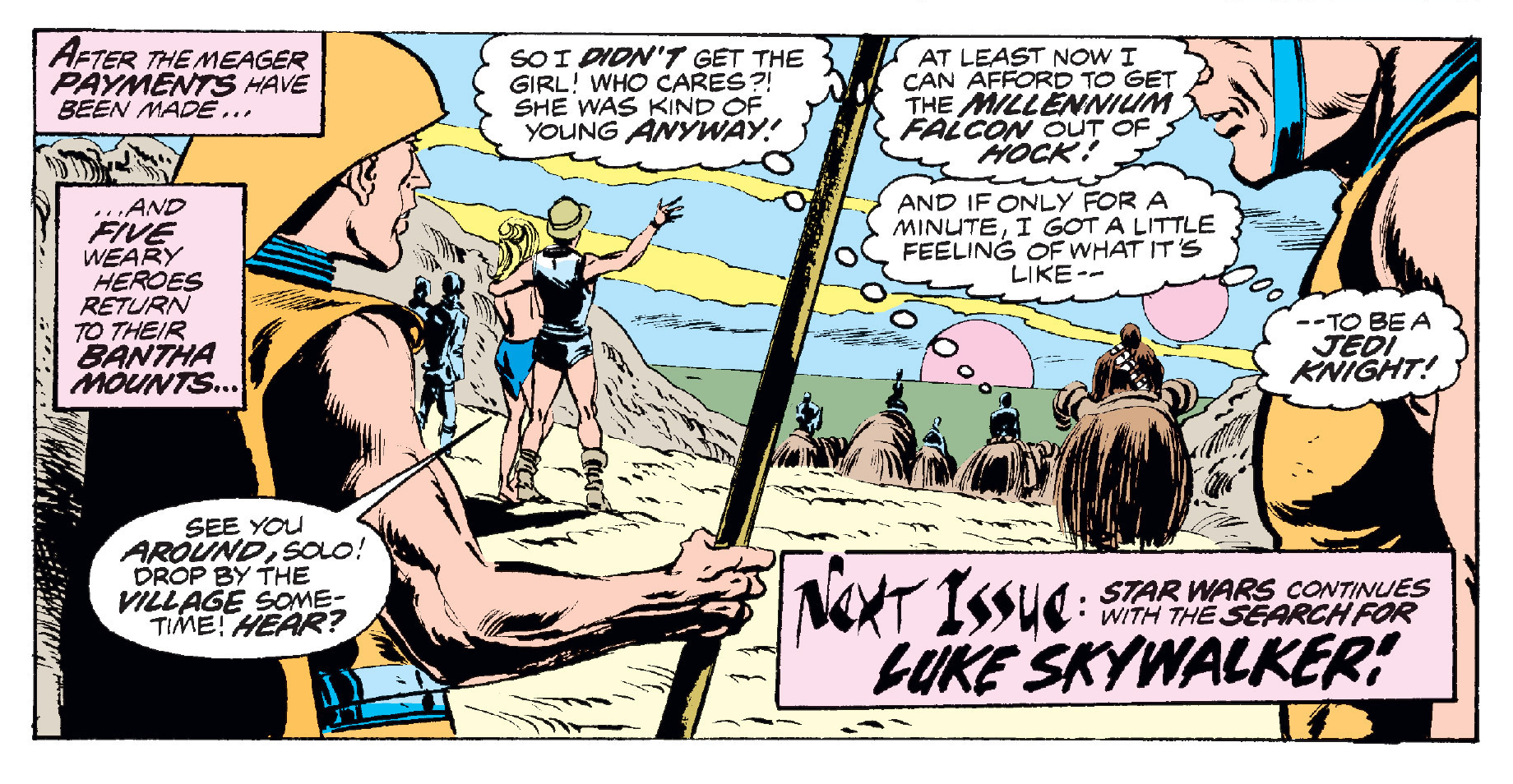 I forgot to mention that this story also has a brief subplot where Han lusts over the barely-dressed daughter of the village chief, which is… yeah.Image: Howard Chaykin, Tom Palmer, Alan Kupperberg, Tom Palmer, John Costanza, and Françoise Mouly (Marvel Comics)

But as one of our earliest insights at what kinds of stories could be told in the galaxy far, far away, “Eight for Aduba-3” still stands as one of the weirdest examples of just how out there Star Wars can get, focusing on the seedier side of the galaxy’s smugglers and space-pirates instead of the classic Light vs. Dark, Rebels vs. Empire conflicts that traditionally dominate Star Wars storytelling.

We already know Solo: A Star Wars Story going to be diving into some of that, but if it can capture even a fraction of the wonderful weirdness on display in this story, it will be unlike anything we’ve seen from a Star Wars movie before – and that’s not a bad thing. Still, maybe it can leave the giant, wisecracking rabbit out of it this time.