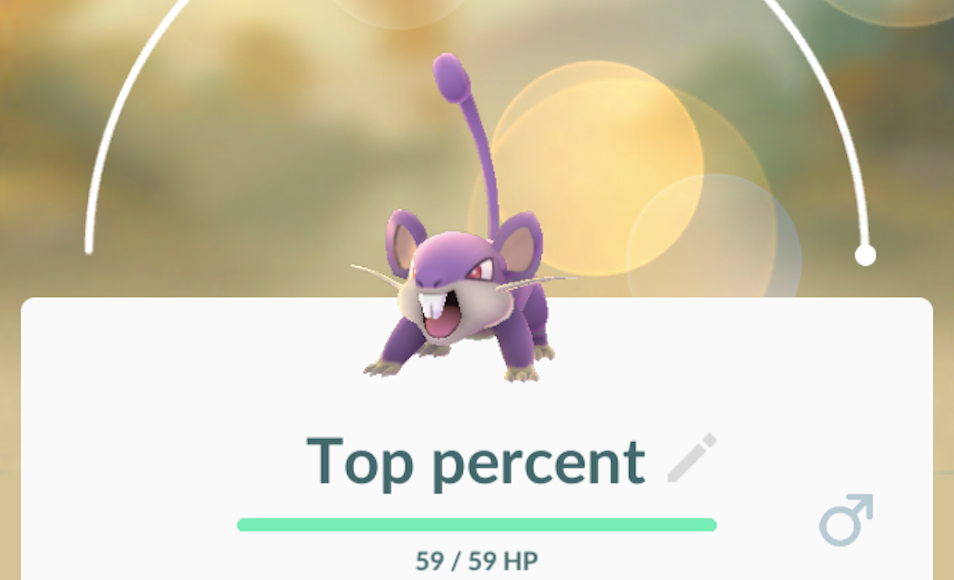 Once upon a time, there was an NPC Pokemon trainer called “Youngster Joey” who boasted that he owned a Rattata in the top percentage of all Rattatas. Players kicked his arse anyway, of course. Years later, Pokemon fans are still keeping Youngster Joey’s memory alive by training truly powerful Rattata.

Nate Taylor, a member of Pokemon GO research group The Silph Road, recently posted a video where he takes a level 40 Rattata against every “tier one” raid boss in the game. (That’s Magikarp, Swablu, Snorunt and Wailmer.) Appropriately, his Rattata is called “Top Per cent”.

“I caught Top per cent over a year ago, when I was level 34 or so and still not even close to the gold Youngster badge,” Taylor told Kotaku. The Youngster badge, for those who don’t play, is a reward that can be earned after capturing enough Rattata. Taylor’s Rattata, as it turned out, had perfect stats. So Taylor powered the Rattata up.

“And, in true Joey fashion, [I] bragged about him incessantly to anyone who would listen,” Taylor said. After seeing another player take on an absurd raid fight, Taylor was inspired to come up with his own silly challenge against raid bosses in Pokemon GO. And so Top Per cent set out to fight against some of Pokemon GO‘s most fearsome foes.

Top Per cent comes packed with Tackle and Hyper Fang. In battle, Rattata attacks just as swiftly as it dodges – but it can still come down to the wire. Many of the battles in the video have Rattata’s HP dwindled down into the red, nearly at death’s door. Still, Top Per cent perseveres.

“After this video, there’s obviously the temptation to maintain a complete set,” he said. “Top Per cent isn’t afraid of ghosts, so we’ll take on Duskull and Shuppet while they’re around.”

He might also be trying other themed challenges, but he doesn’t want to reveal what just yet.

“I’ll just say that I can’t wait for when Metapod comes back into rotation,” Taylor said.