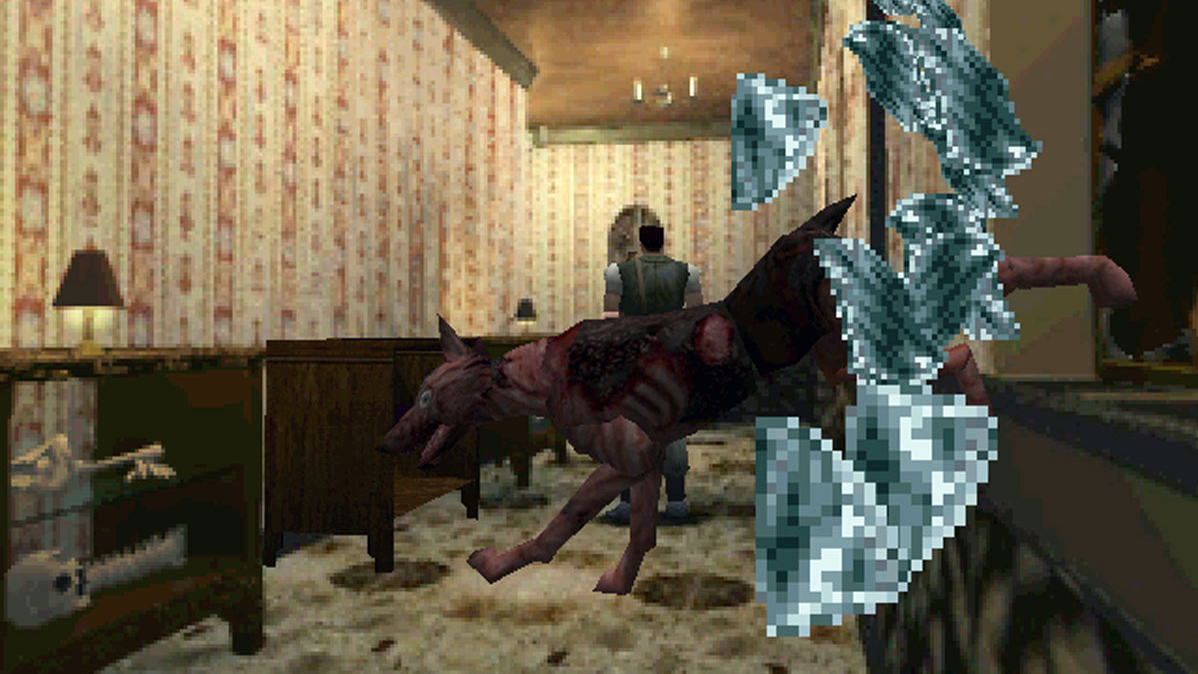 Horror movies and video games have been my passions since I was a wee bonnie lass, but I didn’t know they could coexist until the day in 1996 that I found Resident Evil on a shelf at Blockbuster Video. I was looking for something to rent for the weekend, and it seemed right up my alley: The words and pictures on the back of the longbox promised mystery, zombies and giant spiders, none of which I’d encountered in a game before. I snatched it up so quickly that I’m surprised it didn’t catch on fire.

Today, Resident Evil is a legendary game for countless reasons: The hokey live-action prologue and even hokier voice acting throughout, the fabulously cheesy dialogue, and – oh yeah – its trendsetting survival horror gameplay. It recently celebrated its 22nd anniversary and has spawned a juggernaut of a franchise that spans films, novels, comics, toys, and a ludicrous number of games. But the most revolutionary thing about it for me is that it featured my very first video game scare.

The story is a tale as old as time: The STARS Alpha Team is searching the outskirts of Raccoon City for Bravo Team, who vanished while investigating a spate of “cannibal murders” plaguing the area. Things get FUBARed very quickly – you find evidence that Bravo Team ran afoul of something bad, and before you can say “Jill sandwich” you’re being chased through the dark woods by ravenous, angry, mutant dogs. The game proper begins as you take refuge in the mysterious Spencer Mansion, where things go from bad to worse. Alpha Team members go missing and it’s obvious that something ain’t right in the mansion.

For my first playthrough, I was the intrepid Master of Unlocking, Jill Valentine. I briefly teamed up with Barry Burton and in short order we found a pool of blood (we hoped it was not Chris’) and a “creature” nibbling on the face of Bravo Team member Kenneth. Barry suggested we split up to cover more ground (classic horror movie mistake), which led me to an empty, brightly lit, completely innocuous hallway.

There was a loud crash.

A mutant dog, now inside the mansion, nipping at my heels. Then, another crash, another broken window and another dog.

That jump scare probably took a good five years off of my life.

It was also a revelation, one that established new rules: Nowhere in the Spencer Mansion was truly safe (except, you know, save rooms), and horror games could be as terrifying as horror movies.

Jump scares are perhaps the cheapest of scares. They’re exhausting when they’re used too often, and the returns are diminished every time there’s another loud music sting, another character unexpectedly popping out from behind a corner. Thankfully, there are very few of them in Resident Evil beyond that first big one.

However, the mere threat of a jump scare was enough to make me nervous for the rest of the game. I was on edge, well, everywhere, but particularly whenever I had to pass through what my friends and I dubbed “doggo hallway”, anticipating more loud noises, more bloodthirsty monsters. I was also as thrilled as I was nervous, getting to experience my love of horror in ways I’d never anticipated.