RoboCop, Secret Immortals And Galactus’ Severed Head Are The Stars Of This Week’s Best New Comics 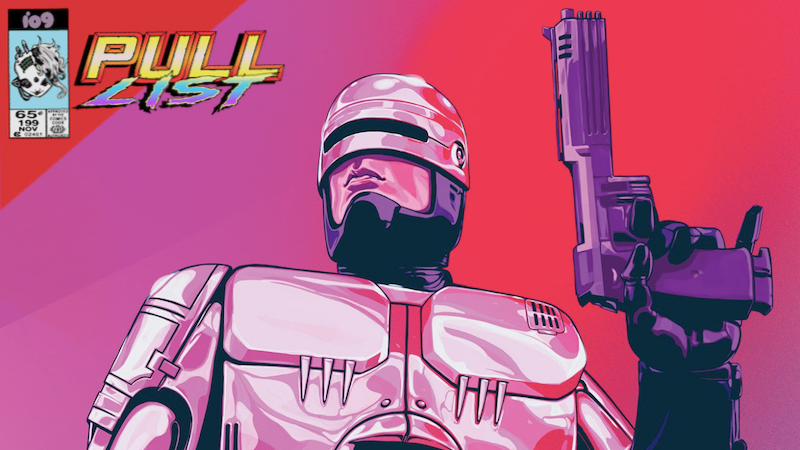 Despite the fact that they all come from worlds where teams of superheroes save the multiverse on a daily basis, most of the heroes in comic books baulk when they realise that their only hope of surviving the arcs of their own stories is – wait for it – working with other people.


Sure, watching as a ragtag group of antisocial people learn to like one another is a great way to introduce us to them as readers, but it can sometimes get a little pedantic watching as they waste time quibbling while the world’s careening toward destruction. The heroes in this week’s comics are none too jazzed at the prospect of collaborating with their newfound allies, but thankfully, they get right down to the important business of saving the day. 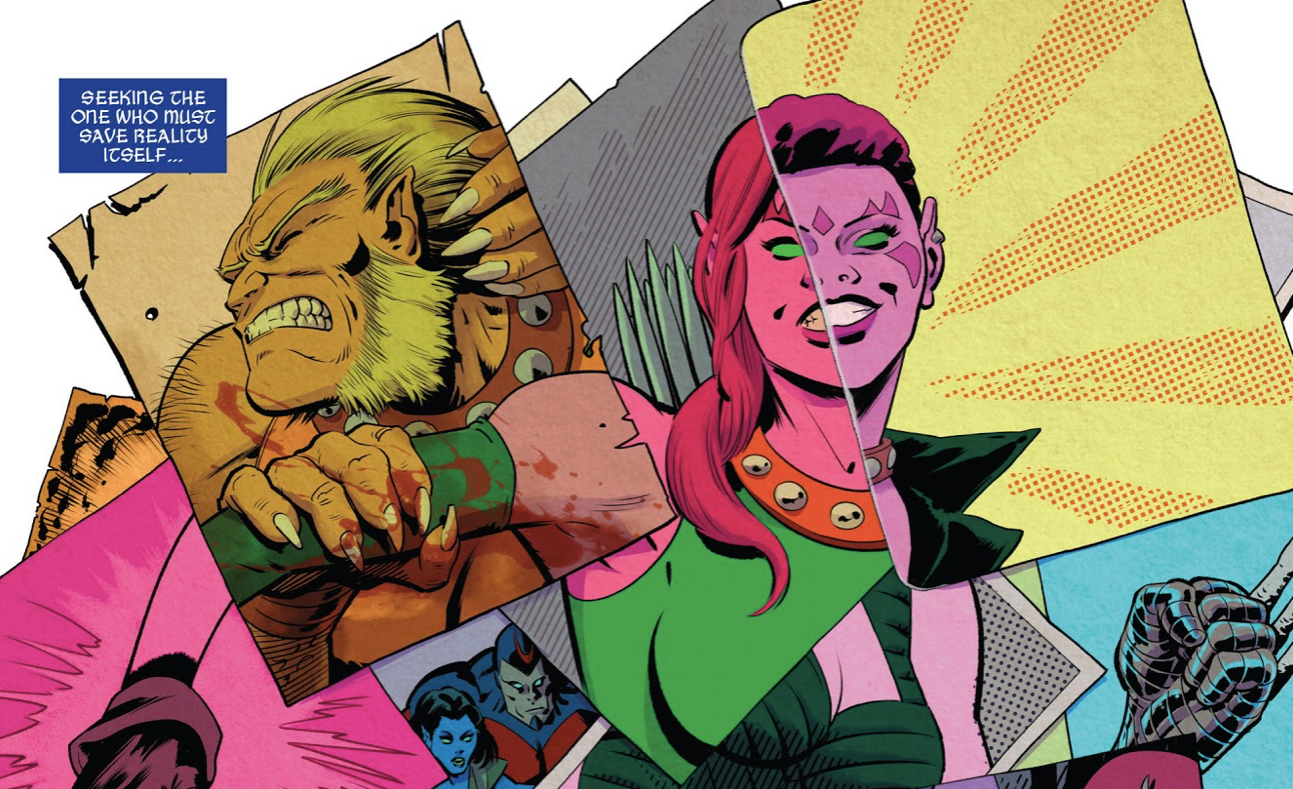 Marvel’s Exiles have existed in many different incarnations over the years, but Saladin Ahmed’s take on the team is a decidedly novel one.

Because it’s a day that ends in “y”, the Marvel comics multiverse is in danger of being destroyed, but nobody except Nick Fury, now acting as a replacement Watcher in Uatu’s stead, and Tallus, a sentient bracelet containing a shard of the Heart of the Universe, seems to notice.

Because Fury’s fated to merely watch the multiverse from the surface of the moon, never to interfere, the Tallus takes it upon itself to seek out a small team of adventurers from multiple dimensions to take down Galactus’ severed-but-still-living head, which has developed the awful new habit of consuming time itself and eliminating possible futures.

Exiles‘ first issue only introduces us to Blink and Khan, a version of Ms Marvel from a far-flung future where she and a band of Inhumans defend Jersey City from humans, sentinels and mutants. But the comic’s promise of bringing characters such as a chibi-fied Wolverine and a version of the MCU’s Valkyrie are reason enough to look forward to seeing just where these Exiles end up. (Saladin Ahmed, Javier Rodriguez, Álvaro Lopez, Jordie Bellaire, Marvel) 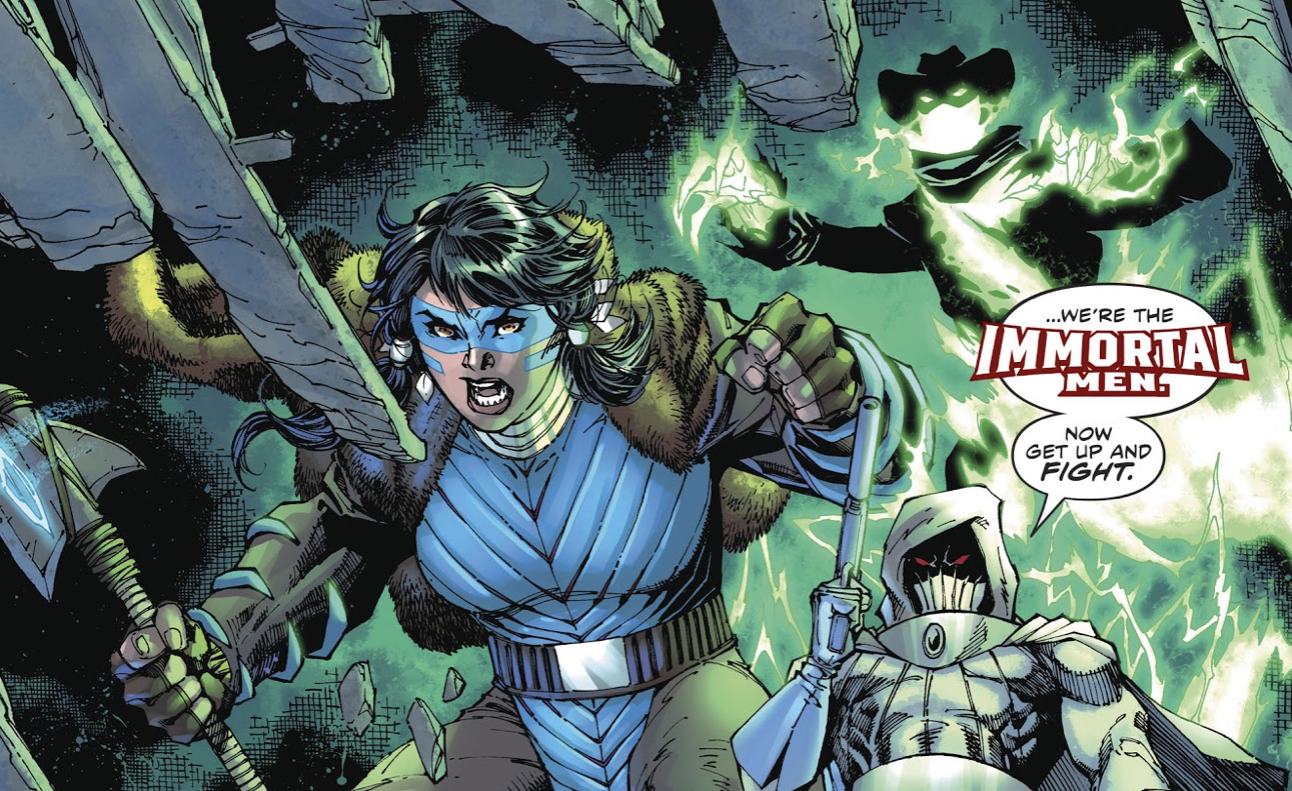 Though DC’s Dark Nights: Metal is over, the event’s aftermath is still being felt in the publisher’s comics in a major way. One of the most interesting revelations to come out of Metal was the existence of a race of immortals who’ve been living in secret since the dawn of time, all the while manipulating the course of history from the shadows.

With Hawkman and Hawkgirl (AKA Carter and Shiera), themselves immortals in DC’s prime universe, back in action, the Immortal Men begin to move back into the light and, unbeknownst to the rest of the world, a conflict breaks out that leads to hundreds of them dying. Through some unknown means, the war of the Immortals begins to bleed over into the dreams of Caden Park, a 16-year-old potential metahuman living in New York City, whose mind fills with visions of the battle whenever he sleeps.

Though his therapist insists that the dreams are just fantasies that can be cured with medication, he’s certain that there’s something out there just beyond the reaches of his consciousness waiting for him – a place somewhere far beneath the surface world, where people like himself come to learn about the mysterious abilities they have been imbued with in addition to immortality. (Jim Lee, Ryan Benjamin, James Tynion IV, Scott Williams, Richard Friend, Jeremiah Skipper, Alex Sinclair, DC Comics) 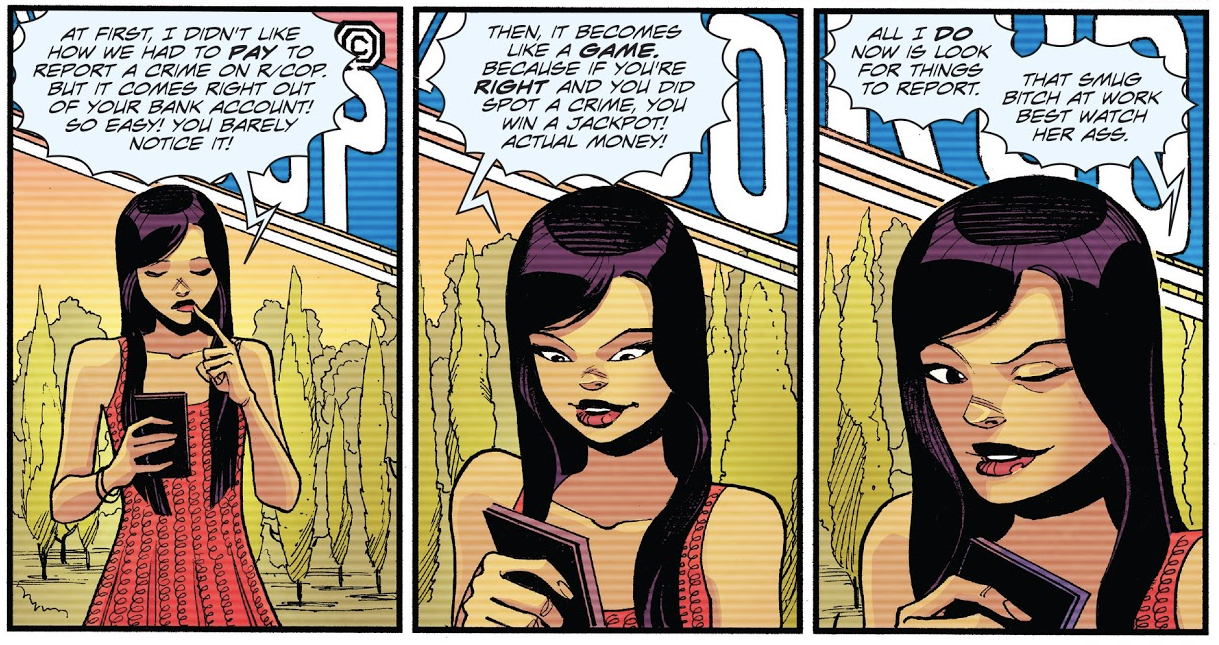 Even though the OCP’s original RoboCop program was a resounding failure that led to the exposure of the organisation’s corruption (and a lot of deaths), that’s never been quite enough to completely destroy nefarious collective sin dystopian futures.

Boom Studios’ RoboCop: Citizens Arrest takes place some time after the events of Paul Verhoeven’s 1987 movie, and it finds its titular cybernetic hero living a life without purpose because of the neural inhibitors the OCP left in his programming. The RoboCop is unable to wield weapons and defend the city he loves, but society seems not to care because of R/Cop, the OCP’s new phone application that’s become the latest replacement for traditional police force.

Using R/Cop, people are able to report crimes they witness by paying a small fee that’s taken directly out of their bank accounts. Should a user’s report lead to a successful arrest, R/Cop’s fee is refunded to them with a return on their investment, effectively turning their snitching into a profitable mobile game.

With Detroit on the brink of becoming yet another apocalyptic police state thanks to the OCP’s machinations, officer Leo Reza sets out to find the original RoboCop, in the hopes that together they can find a way to bring the private policing conglomerate down once again. (Brian Wood, Jorge Coelho, Doug Garbark, Boom Studios)