Sea Of Thieves: The Kotaku Review

Playing Sea of Thieves feels a bit like working in a theatre before the set has been completely built. There’s plenty of space to goof around and a few swords in the wings to have mock fights with, but none of its quite ready for show time. A lack of features and polish has frustrated some players, but those willing to meet the game halfway will discover a game that’s exciting and pensive in equal measure. Sea of Thieves is as fickle and changeable as the sea itself.

In Sea of Thieves, the player selects a randomly-generated pirate and is then tossed out into the world without any particular goals other than sailing around, completing quests for gold. They man a ship alone or with up to four friends, travelling to different islands in any order they like, letting other players go about their business or engaging with them in battles.

You sail everywhere in Sea of Thieves. There’s a great sense of physicality found in sailing one of the game’s two ship types. The small and speedy sloop requires a great deal of multitasking as one to two players zip around the deck to cut the sails, steer the boat, check the map, and raise and lower the anchor. The massive three- to four-person galleon requires coordinated action from everyone on the crew in order to sail effectively. Navigating from one outpost to another can take a good 20 minutes of anchor turns, sail trimming and on-the-fly course correction. Everyone has a role, but once a crew has established a strong rapport, sailing is relaxing and rewarding. 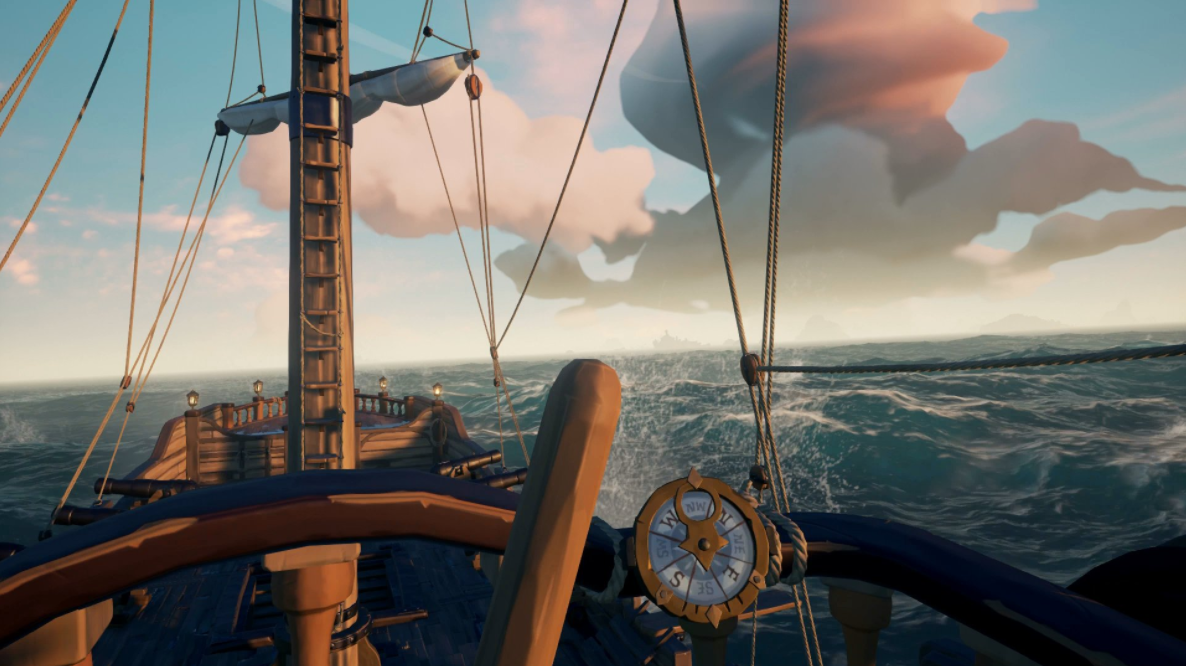 Where Everybody Knows Your Name

Sailing with a crew is a great experience, betrayals and battles abound, and those sunsets are gorgeous.

PC and Xbox One (Played on both.)

Upwards of 30 hours sailing the seas with friends and by my lonesome.

But Sea of Thieves falters more once you get into port. There are only a few things to do for the game’s three major factions. The Gold Hoarders assign missions to sail to distant islands and find buried treasure either by using a map or solving riddles of varying complexity. The Order of Souls tasks players with fighting skeletons and returning their cursed skulls for rewards. The Merchant Alliance asks players to deliver a certain breed of chicken or a barrel of gunpowder. Completing these tasks grants gold, which can be used to buy clothing or to deck out your ship with cosmetic items such as new sails.

You’re as strong at the start of Sea of Thieves as you are 20 hours later, and if there’s any indication that you’re an experienced pirate it will be your expensive hat. Sea of Thieves doesn’t really care about the player. Not in the sense that it wants to buff your stats or allow you to make permanent changes to the game world. It doesn’t care about how skillfully you completed a quest or even if you complete it at all. It offers you a world and doesn’t concern itself with what you do in it. 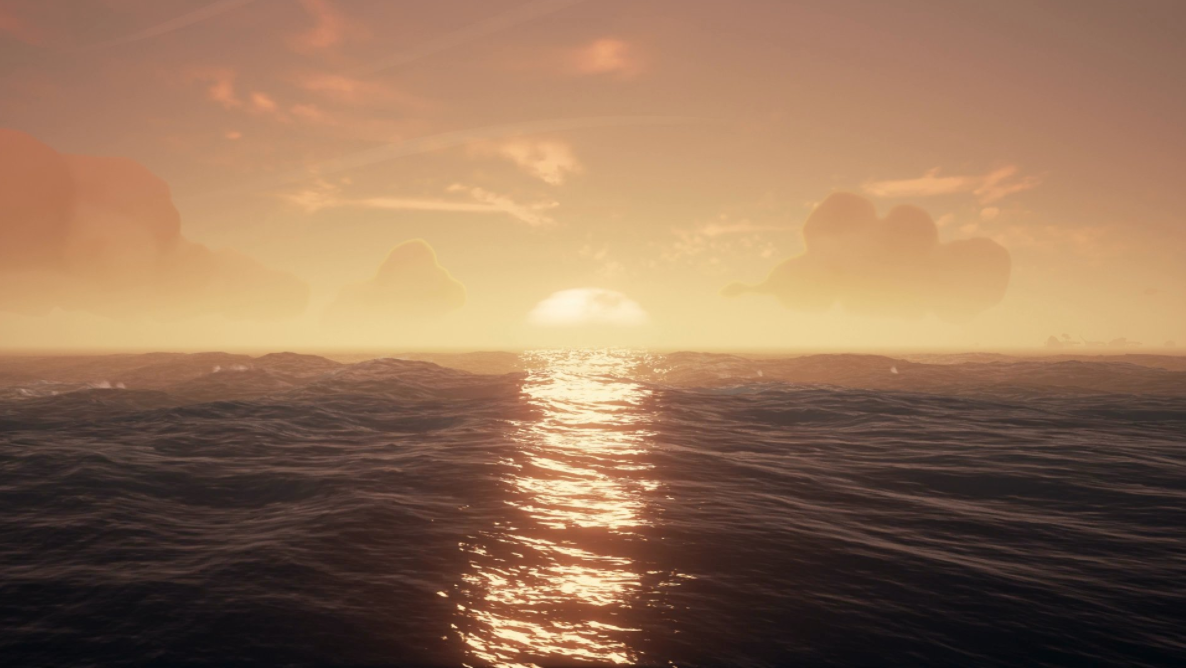 This indifference might seem disappointing, but it fosters a sense of freedom that turns Sea of Thieves into a schoolyard playground game where the teacher isn’t watching. Once, after hours of sailing with friends, we decided to tackle one of the game’s skull fortresses. Fortresses are outposts brimming with enemies that, if defeated, drop the key to a room full of treasure. As we battled the skeletons, another ship sailed up and blasted our galleon to pieces. When we respawned with a new ship, we went back to the island and blew up our enemies, only for them to repeat the process and attack us. This war of attrition lasted three hours, until a lone player in a tiny sloop joined the battle and brokered a truce over in-game chat where everyone decided to fight the skeletons and split the treasure.

It could have ended there there, but as I battled the skeletons alongside our former enemies, my crewmates swam beneath their ship and blew up a cache of gunpowder barrels. In the resulting confusion, we executed them all, took the loot, and, alongside the peace-loving sloop captain, sailed into the night with a massive stockpile of gold. When our victims tried to chase us down, they were attacked by a kraken. We watched as they were once more drawn to the briny depths of the sea. Because Sea of Thieves is indifferent to what the player does, there are few repercussions for these displays of treachery and lawlessness. Every sessions holds the promise of a similarly spectacular tale of high seas stupidity. 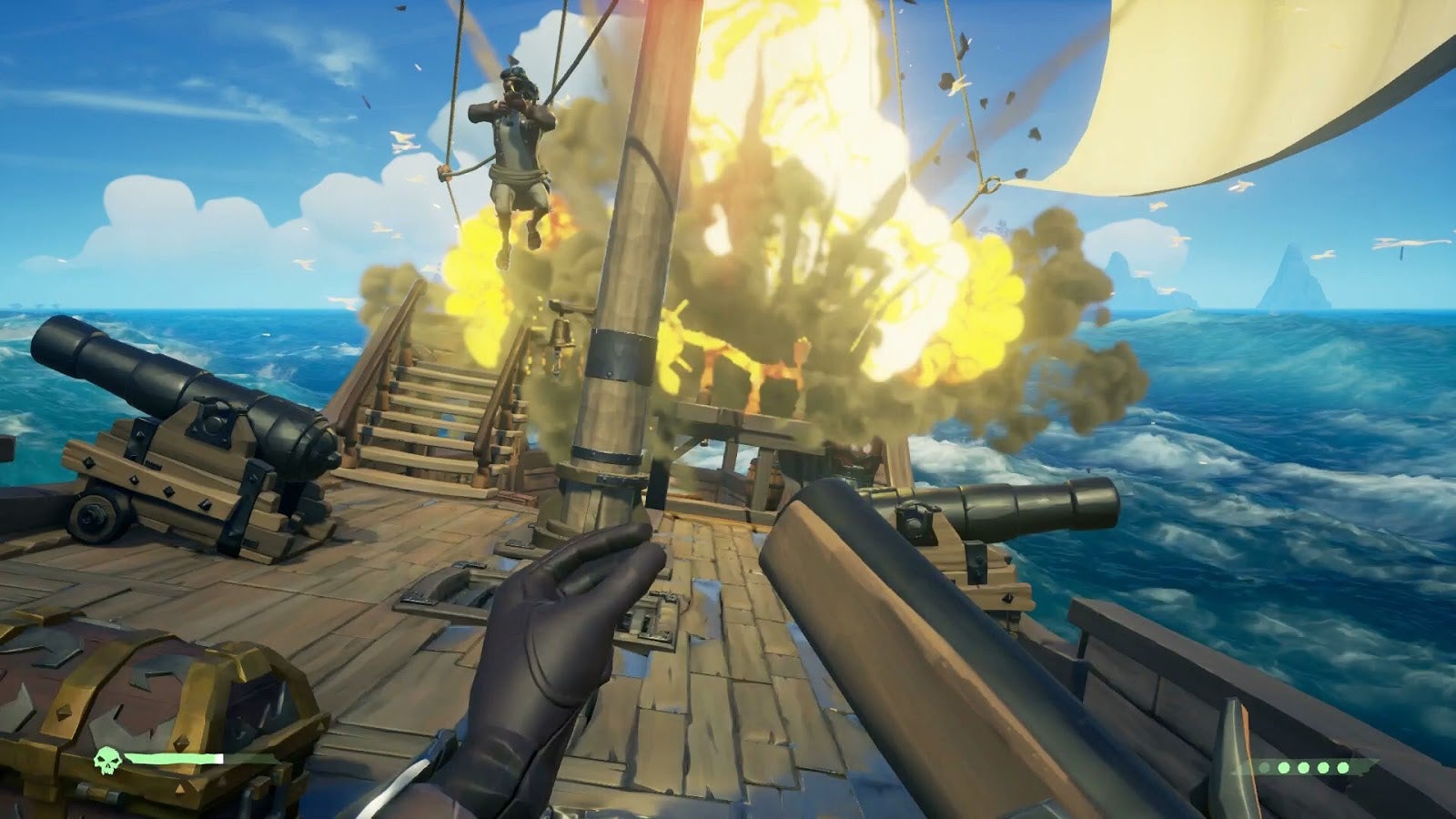 This isn’t a press shot. This is something that actually happened to me as I robbed someone’s ship.

Each new encounter with another group of players asks the question: Are these people cool, and if not, what can we do about it? Fire-forged friendships fall apart once the loot is up for grabs, unlucky fellows are tossed into the brig without due process, musicians serenade each other as two boats pass in the night, a pirate achieves legendary status through shady means and ignites a community-wide debate. For a game that doesn’t offer many different things to do, Sea of Thieves has a lot of things happening in it at any given time.

In spite of all this action, Sea of Thieves’ greatest trick is its stillness. While the game can be downright joyous with friends, when played alone it has a unique feeling of repose. While some players will undoubtedly find that playing alone is not fun, it is soothing. Working the deck of a small sloop to trim sails and catch the perfect heading into the sunset is as tactile and memorable an experience as a rousing swordfight or storm-set galleon battle. The more you play Sea of Thieves, particularly in these stolen moments of solitude, it becomes more and more clear that Sea of Thieves is not really a thing you do but a place you go. Whether that’s to laugh with friends or sail until you forget that argument you had with your partner, it doesn’t matter. The sea is always waiting. 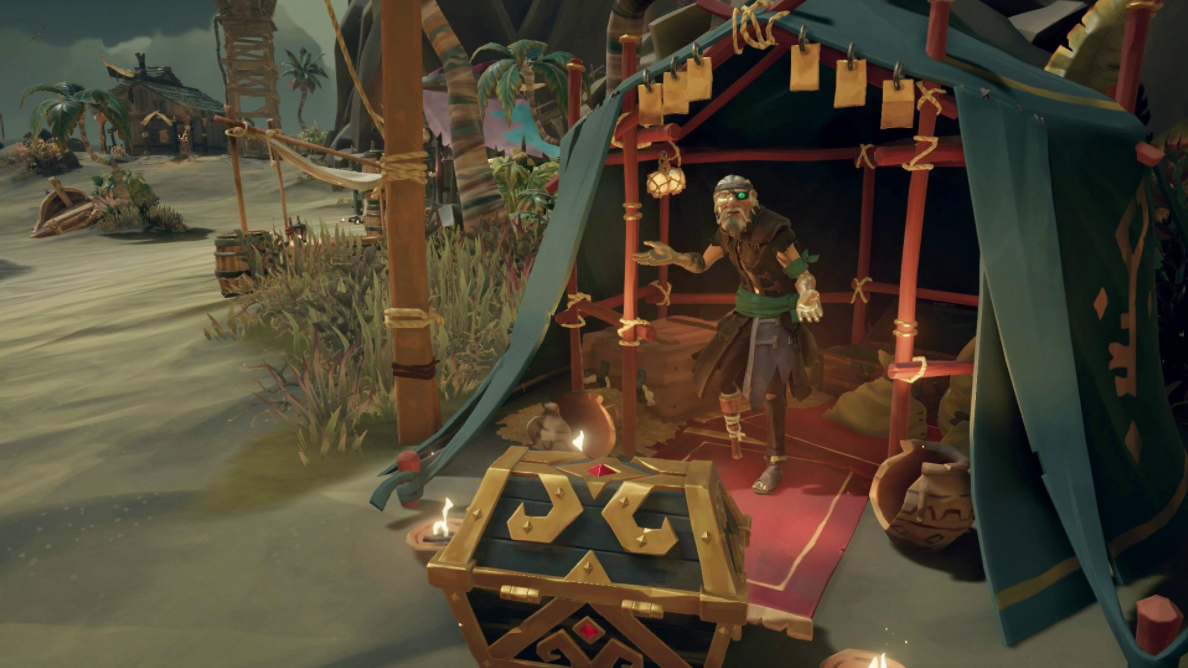 Sea of Thieves‘ biggest problems are practical ones that interfere with the ability to reliably return to the ocean. Poor server stability means that players rubberband on the deck of their ships or miss out on turning in loot when servers crash. The inability to easily manage your friends list in-game or set up a crew means the player will be forced to rely on Microsoft’s atrocious Xbox desktop app or the clumsy Xbox One interface in order to organise a party. At launch, Sea of Thieves is a game that feels almost hostile to the idea of someone playing it, disconnecting players at random and summoning up as many error codes as krakens. It fundamentally undermines things, and the game won’t truly shine until the seas are stable and organising play sessions is less of a hassle.

Much has been made of the fact that Sea of Thieves feels like a beta with the price tag of a finished game. For all of the beauty and excitement, it’s hard not to feel like there could be a great deal more. Sea of Thieves feels doomed to speculation about the mathematically correct amount of content per dollars players spend. In a Steam discussion thread on Her Story in 2015 someone asked what they were supposed to do in the game. One person replied that they needed to decide when they were satisfied with the information they’d discovered. The original poster asked in response, “How do I decide when I am satisfied?” Sea of Thieves invites that question with each new voyage, but it never manages to provide answers. I’m not entirely sure if it needs to. You just keep sailing until you find what you’re looking for.

For some players, satisfaction might be a fancy hat or a night of fighting skeletons with you friends. For others it might be pulling off a mean bit of treachery or locking a stranger in the brig for hours. For someone else, it might be watching the perfect sunset. The developers have said they’re planning to add more things to do in the game, but even in its current seemingly incomplete state, Sea of Thieves is still rewarding.