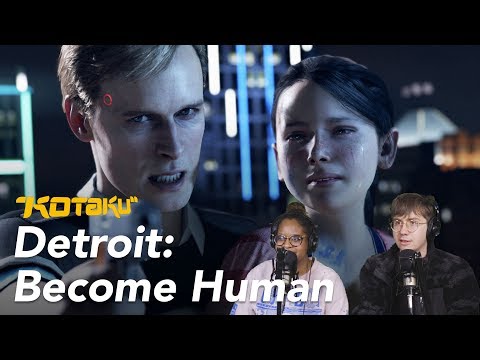 I played Detroit: Become Human in the company of director David Cage last week. Cage told us that the game is designed to be as fun to watch as it is to play, so when Sony sent us 30 minutes of footage from various episodes of the game, I decided to out that statement to the test. Gita Jackson and I recorded ourselves watching and reacting to the footage. We had a good time talking about how much we want to play the game.

In the video, Gita and I watch 26 minutes of the currently available footage of the game, which Sony newly sent us for this preview, while I tell her about the experience of playing it. In addition to the previously available demos, we saw a lot of new stuff – for example, we got to find out what happens after android Kara and little girl Alice run away from home in the “Stormy Night” scene. Spoiler: you can try to steal a candy bar from a convenience store, and choose to sleep either in a car or an abandoned building.

Also, Gita and I talk about how well the androids’ clothes fit.

Last week, when Kotaku senior reporter Cecilia D’Anastasio told Cage that Detroit would probably be popular on Twitch, he immediately replied, in a joking tone, “I hope not!” He explained that he wanted players to play the game for themselves, and make their own choices. I told him that watching players make decisions on Twitch is what pushed me toward wanting to carve my own path through Until Dawn, and I imagine that Detroit has even more potential: Cage had explained that Detroit has over 60,000 possibilities in its narrative.

Cage said the game takes about eight hours to play through to one of its many endings, and that many players will want to play the game at least twice. I got a taste of this during my play session last week: as a runaway android named Kara, I got caught shoplifting a chocolate bar at a convenience store. Now I’m wondering if I could have gotten away with stealing that chocolate bar, and if the little girl I was protecting would have spoken different, less despairing dialogue if I’d been able to provide her a chocolate bar.

Detroit has cutting-edge graphics. Its HDR lighting gleamed and glistened beautifully on the 191cm Sony XBR-Z9D that Sony had somehow gotten into the hotel penthouse where I played the game. Speaking of high dynamic range, it features a performance by Lance Henriksen, known for playing the android Bishop in Alien, as a benevolent, wealthy human owner of an android. Now that’s what I call a versatile actor.

Yet nothing impressed me so much as the realisation that this is a video game as comfortable to hang out with as an episode of Law & Order. I told Cage, “I want to play this game while eating dinner.” He replied, “Oh.” I meant it, though. I can think of very, very few video games I would want to or be able to play while eating dinner.

Detroit: Become Human will be out for the PS4 on May 25.