The Story That Made Me Realise How Lonely Superman Must Be

When I was a kid, it seemed impossible that Superman might have any problems. Sure, he had adventures that threw setbacks in his path but he always overcame those. It wasn’t until I read Action Comics #500 that I ever thought that the Man of Steel could have the same kinds of persistent emotional vulnerabilities that normal folks deal with.

I don’t remember when I first read the “The Life Story of Superman,” by writer Martin Pasko, penciller Curt Swan, inker Frank Chiaramonte, letterer Gaspar Saladino, and colorist Adrienne Roy. However, I do remember how I first read it. That story originally appeared in Action Comics #500 in 1979 but my initial encounter with it was in a beat-up paperback titled The Superman Story.

That volume was first published by Tor in 1983, which means – if I read it in that first year – I would have been 11 years old. The Evan of 1983 was skinny, gawky, and awkward as all hell, my introvertedness made more painful by my mother’s moving us to Long Island. Whether it was the borough of Brooklyn where I was born or the town of Hempstead that we’d just moved to, I never felt like I fit in anywhere.

That’s probably why a story that showed Superman as someone who felt all alone in the cosmos hit me so hard. 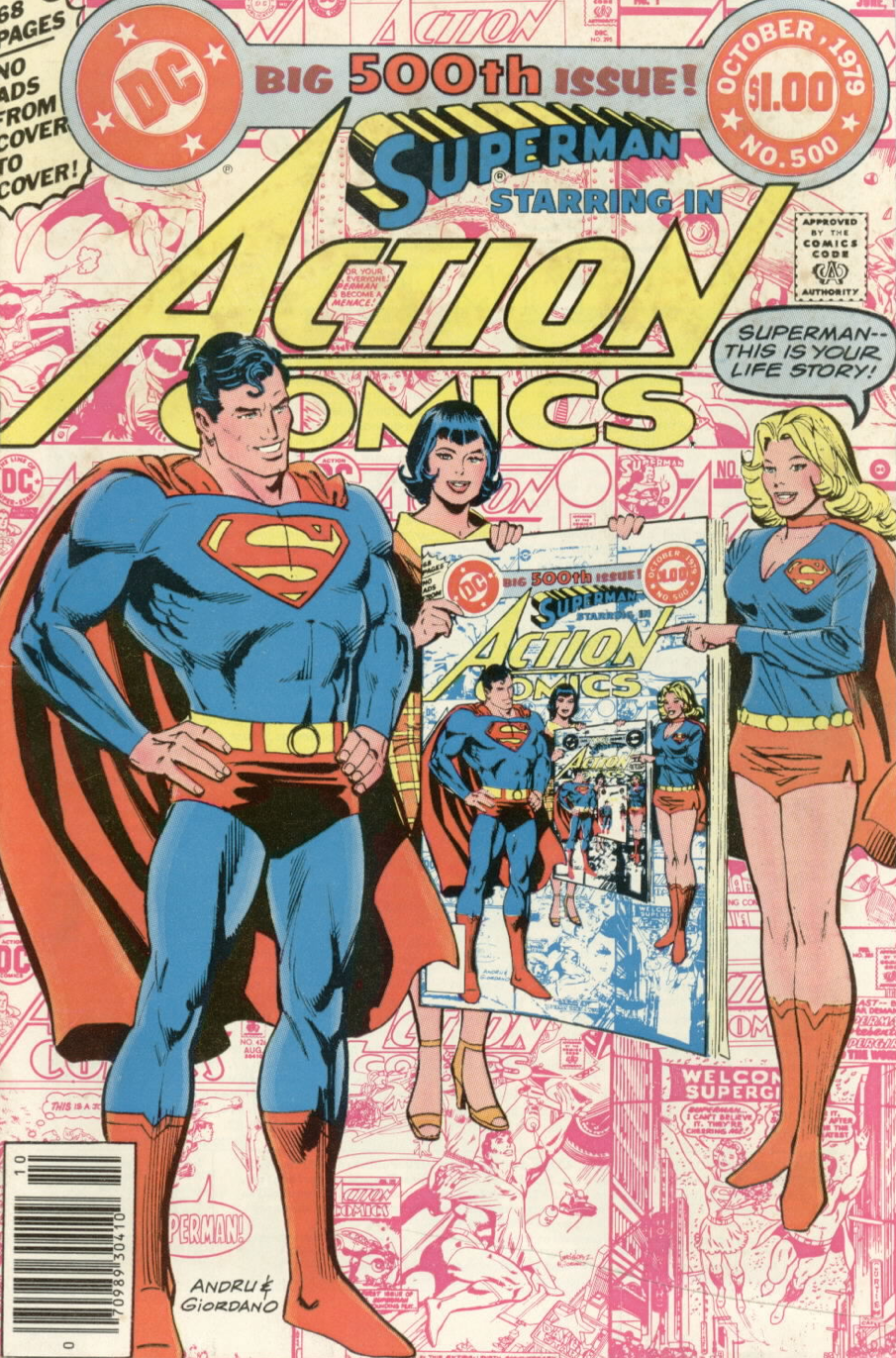 “The Life Story of Superman” is exactly what it sounds like: a museum tour through the character’s fictional biography, narrated by Kal-El with highlights pegged to his coming-of-age. There’s also a standard, late-Silver-Age plot that has Lex Luthor surreptitiously planning to replace the Man of Steel with a quick-grown clone that will be loyal to him, but that’s not the part that I responded to as a kid.

This comic was the first one to give me a sense of Superman’s emotions and, probably, the first time I experienced him as human.

Moreover, it fed into the sentimental relationship I was already subconsciously building with the character. My clearest early Superman memories are from 1978’s Superman: The Movie and I remember how reading this story helped me understand the character emotionally.

I haven’t read this story in three decades but, coming back to specific moments calls up surprisingly powerful echoes. More specifically, I remember how they made me feel. The storytelling is all swollen with soap opera melodrama but there’s no denying the impact certain scenes have. Unexpected poignancy abounds through “The Life Story of Superman,” hidden in little throwaway beats. 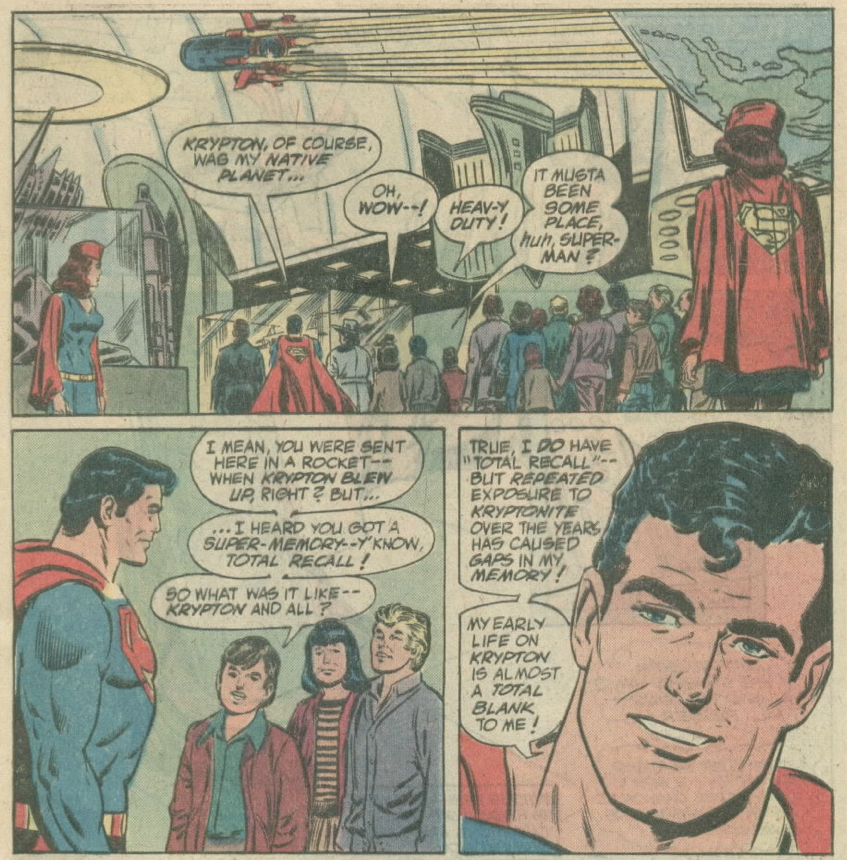 For example, Superman says years of Kryptonite exposure have eroded his ability to recall childhood memories despite having a super-brain. It’s a beat that sets up the hacked mind-prober ray that Lex will use to program his clone, but it’s also a panel that makes clear the secret toll Superman has been paying while saving the world.

Action Comics #500 boomed out in the grandiose, stentorian voice that typified the Julie Schwartz era of DC Comics. For its occasional moments of feeling staid, this comic was meant to be understood as important. Impressionable 11-year-old Evan soaked it all up, mostly because Pasko’s script is great at keeping characters’ emotions at the forefront.

The scenes set on Krypton all land exceptionally well, especially the sequences centered on Jor-El and Lara’s frustration and desperation, as well as toddler Kal-El’s attachment to his pet dog Krypto. That first chapter culminates in Superman reliving his escape from an exploding Krypton as a child, and those panels hit like a hammer. That small, quiet panel of Superman shaking with silent sobs, surrounded by people who’ve shown up to celebrate an indestructible hero, is a thing of beauty. 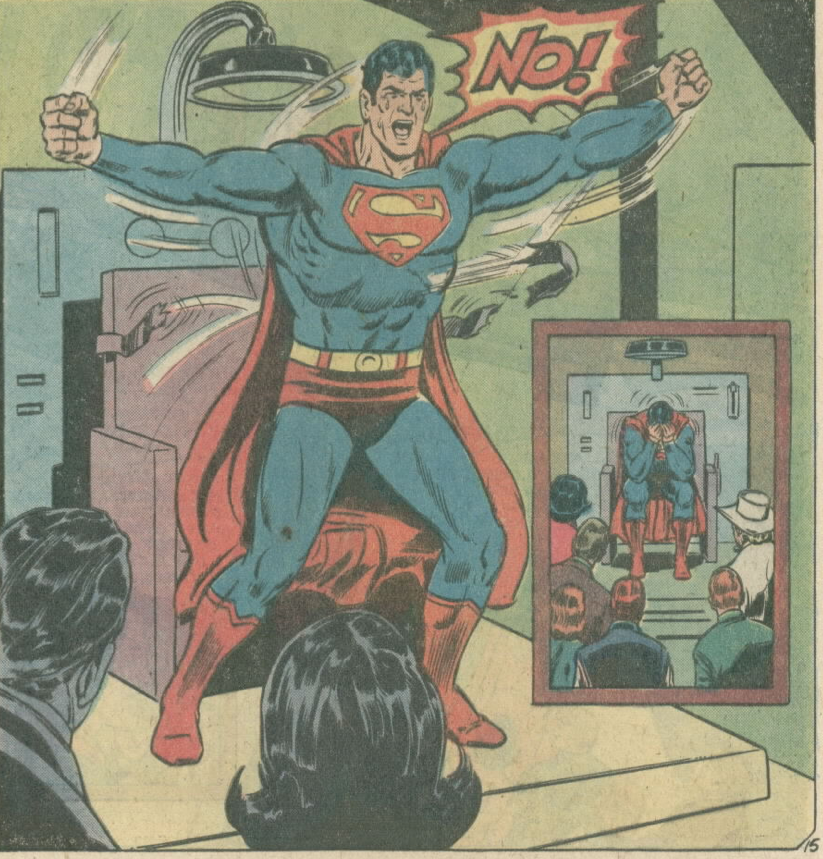 Helplessly watching a planet and parents die all over again is too much for even a Superman to bear.Image: Curt Swan, Frank Chiaramonte, Gaspar Saladino and Adrienne Roy (DC Comics)

If memory serves, it wasn’t until high school that I’d started to pay attention to the specific names of writers and artists who’d worked on comics I was reading. I remember thinking of penciller Curt Swan as a ham-n-egger, a dependable omnipresent machine that churned out unremarkable work. I distinctly recall that this comic started to change my perceptions of him and a long-blooming affection began.

With the distance of decades, it’s easy to laugh at fraught scenes of Superman choking up and crying. But the way that Swan draws emotional reactions is forthright and guileless, and there’s a midcentury sentimentalism that seems to connect to Norman Rockwell and Leave It to Beaver.

Combined with the thematic ambitions of Pasko’s script, the end product makes this comic feel like a milestone in execution – and not just because of its issue number.

I’d always had a sense of the emotional churn inside, say, Spider-Man and Batman. “The Life Story of Superman” made me start to think of the Man of Steel as someone who does just more than fly, punch, and smile.

In particular, the dialogue from his reunion with Krypto is inspired and the smile that Swan draws on Superman’s face really makes it seem like he’s experiencing a moment of peak happiness. 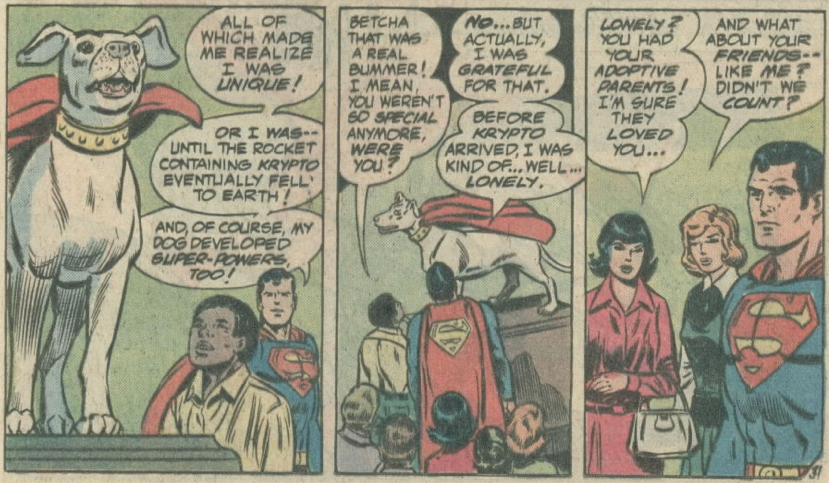 “The wind in your face in a way that no one else in the world can feel it…”Image: Curt Swan, Frank Chiaramonte, Gaspar Saladino and Adrienne Roy (DC Comics)

Later, Superman explains what it meant to have Supergirl be with him on Earth and the talk of familial love leads the audience to ask the Man of Steel about his romantic life. In these scenes, we get the familiar canard that he can’t marry Lois because of how her life would be in danger.

However, all the preceding emotional beats make this instance of that logic resonate more meaningfully. The story walks the reader through his loss and loneliness and, for me, it felt like he might really want and need to be with Lois, as opposed to merely enduring her marriage-crazy schemes from older stories. 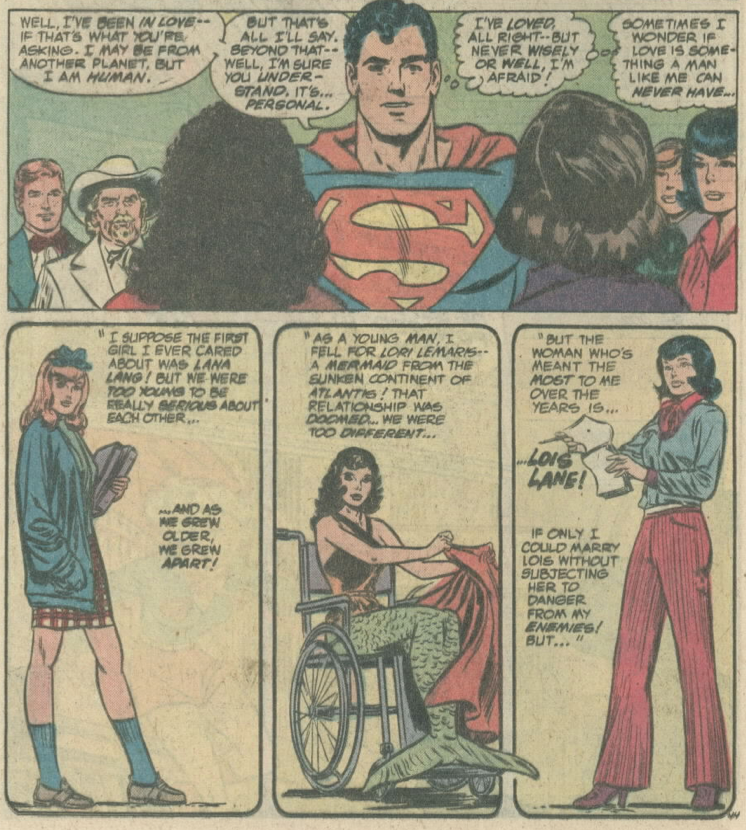 In an editorial letter, writer and DC’s in-house continuity cop E. Nelson Bridwell runs down major events that have happened in Action Comics and wonders about the future: 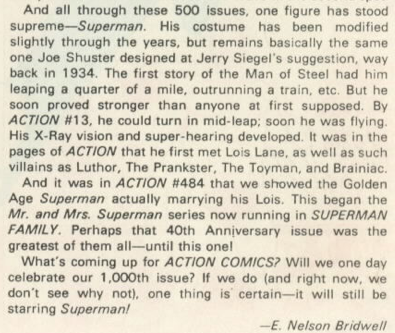 The 1,000th issue that Bridwell mused about just came out and the Man of Tomorrow that we have today owes a debt to the foundations laid by comics like Action Comics #500. The anniversary instalment from 1979 came out long before images of Superman crying and quotes about how his feelings are his true invulnerability became latter-day clichés.

He was a still a fairly static character meant to soar through done-in-one stories that would shore up a pillar of a publisher’s business. Part of that business was selling stories to be re-purposed for the bookstore market.

That paperback I read as a kid had no colour and had skewed panels that were seemingly cut out and pasted onto a new compressed layout that did the story no favours. The cheap printing, transparent plot formula, and uptick in craft sophistication may prompt modern readers to laugh at Action Comics #500. 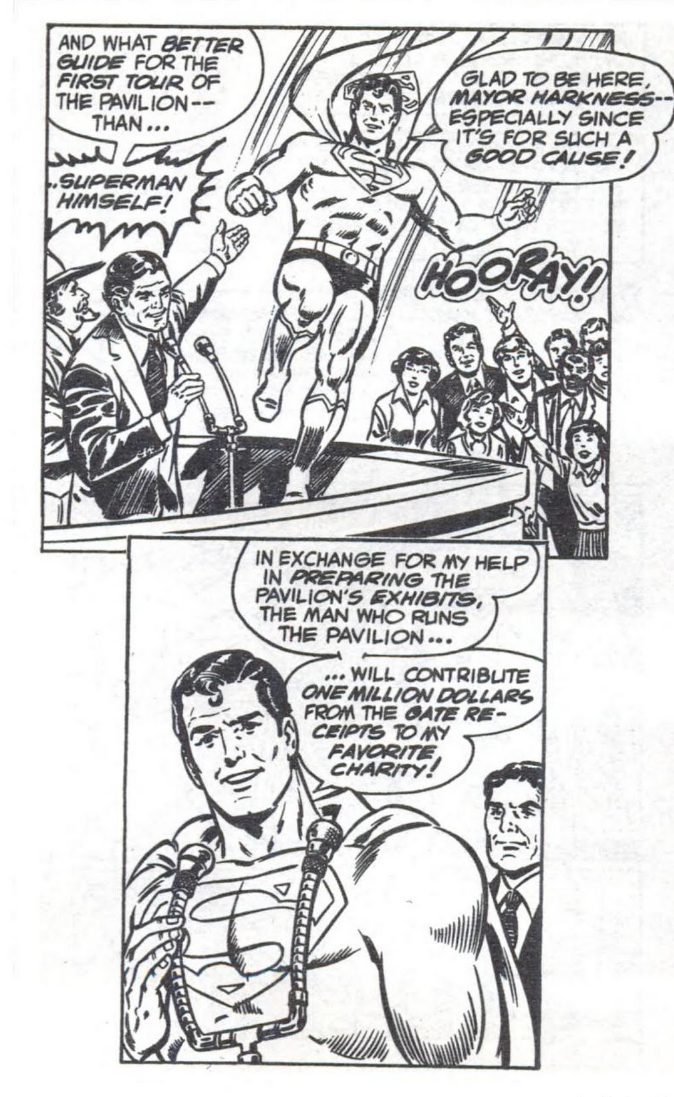 A scan of “The Superman Story” paperback where “The Life Story of Superman” was reprinted.Image: Curt Swan, Frank Chiaramonte, Gaspar Saladino, and Adrienne Roy (Tor Books, via Google)

But “The Life Story of Superman” had enough energy to break through to my heart and give me the sense that Superman had a heart too, one that yearned and broke just like mine. Pasko’s writing gave me a lesson I didn’t know I needed: all the super-strength in the world doesn’t make one immune from wanting connection with others and those connections make us who we are, even if we’re Superman.