Twitch’s Roasting Of Mark Zuckerberg Is The Most 2018 Thing 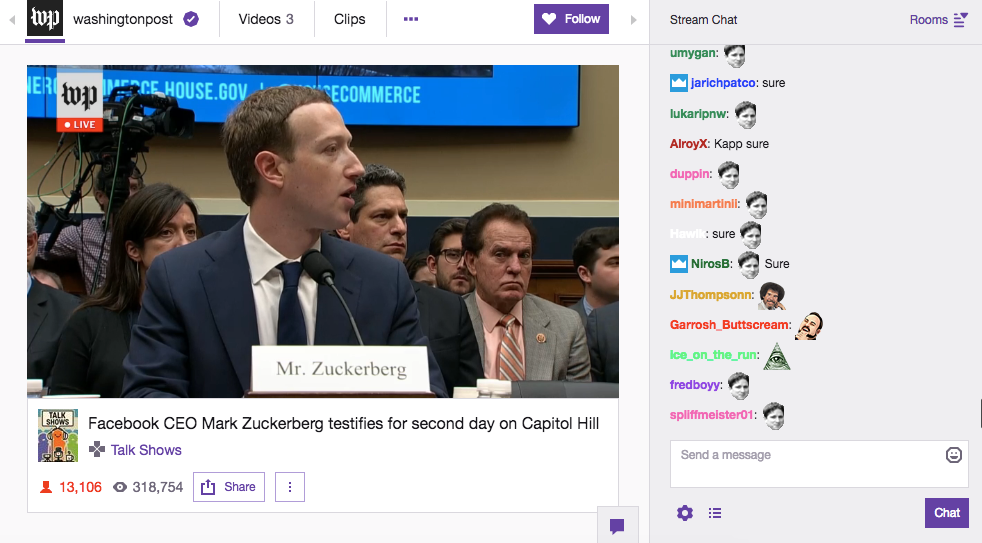 Over 10 thousand people watched the second day of Facebook CEO Mark Zuckerberg testifying in front of US Congress today on The Washington Post‘s Twitch channel. The spammy, fast-moving Twitch chat for this hearing was like seeing the entirety of 2018 collapse into a self-referential black hole.


Following the Cambridge Analytica scandal, where it was discovered that the political data firm hired by US President Trump gained access to private information of 50 million Facebook users, Mark Zuckerberg testified in front of Congress to answer questions about privacy concerns. Twitch chat responded to this hearing in the only way it can – through memes and emotes. It’s a little weird to watch thousands of people process a complex political scandal by using the Kappa emote, but that is what happened. Twitch users made the hearing itself into a meme. Whenever Zuckerberg spoke, the chat started riffing on his rehearsed, robotic nature. 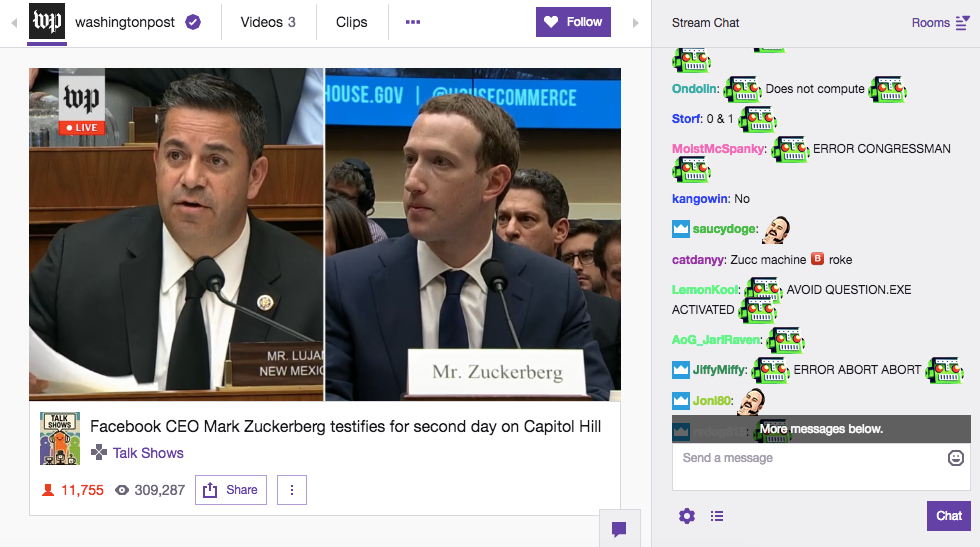 This is what happened anytime a Congressperson laid into Zuckerberg for being evasive: 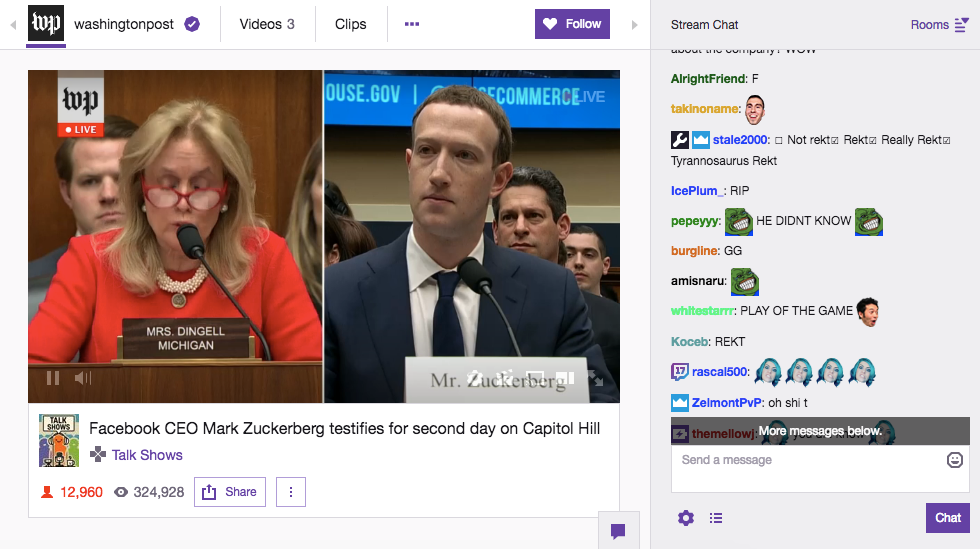 When New York representative Yvette Clark had her chance to ask Zuckerberg some questions, Twitch chat spammed the Trihard emote, which is the emote of the streamer Trihex that some Twitch users like to spam whenever a black person appears on a stream. 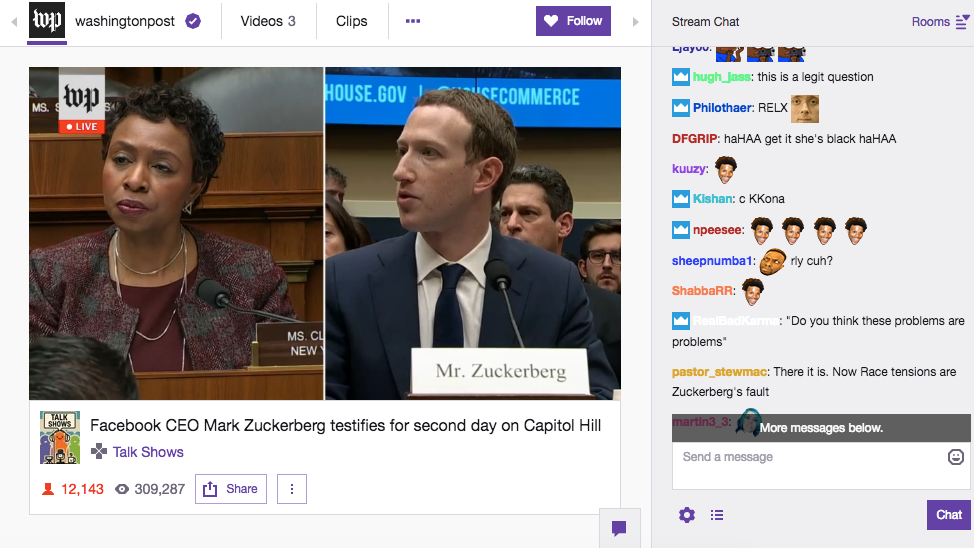 They also spammed it when this Congressperson mentioned a black person. Stay classy, Twitch chat! 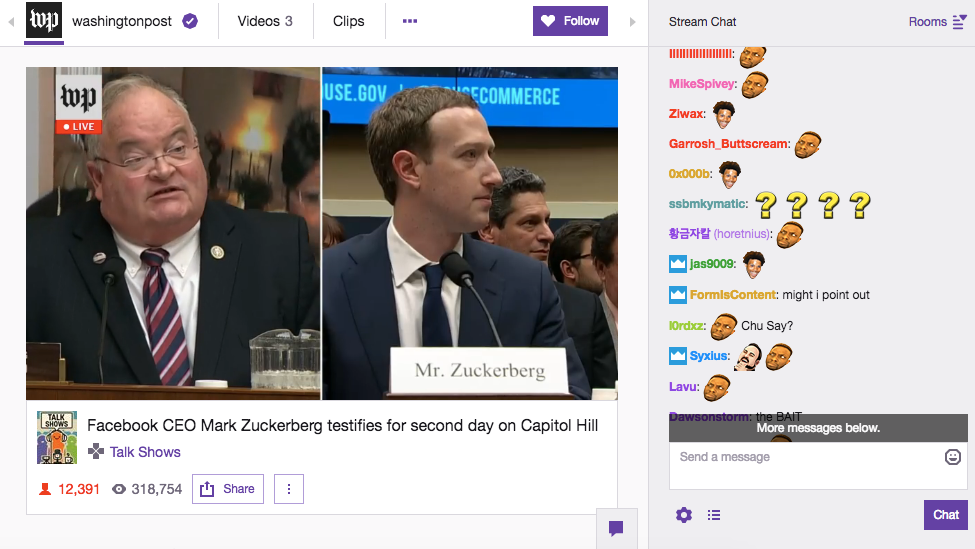 Zuckerberg’s hearing was a relentless barrage of questions, and honestly Zuckerberg looked as though he was getting owned. Twitch users have clipped their favourite sections of his testimony, making the clips page on The Washington Post‘s page look straight out of the subreddit Livestream Fail rather than one belonging to a journalism outlet. One of the most watched clips is this one, of a senator asking Zuckerberg if he’d like to share the name of the hotel he stayed in last night, which elicited a laugh:

Another clip watched over 50 thousand times is of a senator telling Zuckerberg that his user agreement “sucks”.

In this one, from the end of yesterday’s hearing, a drained-looking Zuckerberg stares off into the middle distance as a senator calls him “Suckerberg” by accident.

In a way, this was the ideal way to watch and process this hearing. This is a very 2018 problem, and the way that these viewers are responding and reacting to it is just as current. Facebook is a driver of culture – this hearing wouldn’t be happening if it wasn’t – but for a lot of young people it feels about as cool as owning a landline phone. As much as they’re here to get informed on the hearing, they’re also here to watch Zuckerberg get “rekt”, just like they would any unpopular internet personality. They want to see him fail, and they want to watch it in real time. As the hearing adjourned, Zuckerberg got a familiar, trolly sign off from Twitch chat: “GG EZ.”