A character model of Lev from The Last of Us Part 2 (Screenshot: Naughty Dog)

Well, This Was A Pretty Ridiculous Far Cry 5 Bug 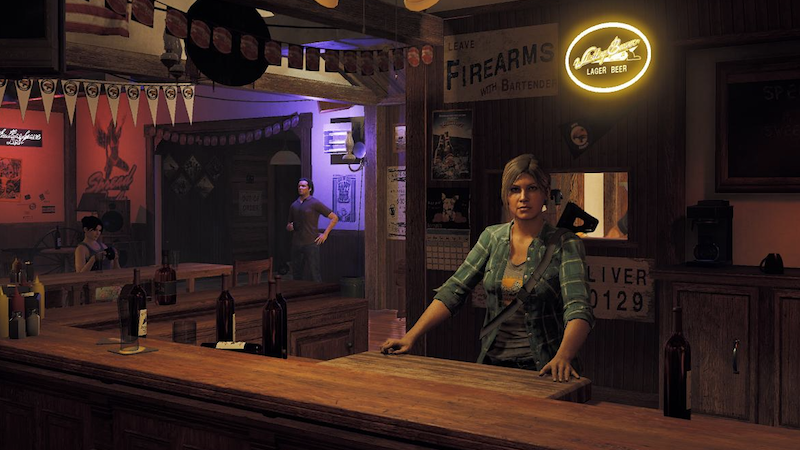 As fun as Far Cry 5 can be, it’s definitely got its share of bugs. There are looping lines of dialogue, inconsistent enemy behaviour, physics glitches, and a few bugs that straight-up break the game. I ran into a funny one of those a few nights ago.

Like a lot of people, I started out by focusing on the southwestern part of the map. That’s the area overseen by John Seed, one of head honcho Joseph Seed’s lieutenants. He’s the guy with the creepy fake-caring eyes and the penchant for carving words into people’s skin.

I did some story missions, blew up some silos, flew some planes, and eventually I got the area’s “resistance meter” maxed out. It was time to take John down.

To kick off our showdown, John Seed got on the radio to tell me he’d gone to Fall’s End with his goons and taken all of my new friends hostage. He had Mary May the bar owner, Nick the pilot, and Jerome the preacher, and what was I gonna do about it?

I went to meet him at the town church, where I got to watch a cutscene where he cut on me a bit, mumbled some crap about sins, then tormented my friends, before I finally grabbed a gun and fought my way free.

As John made his escape, Mary May the bar owner hopped behind the wheel of a truck with a mounted gun on the back. Hurry up, she called to me, let’s go get him! 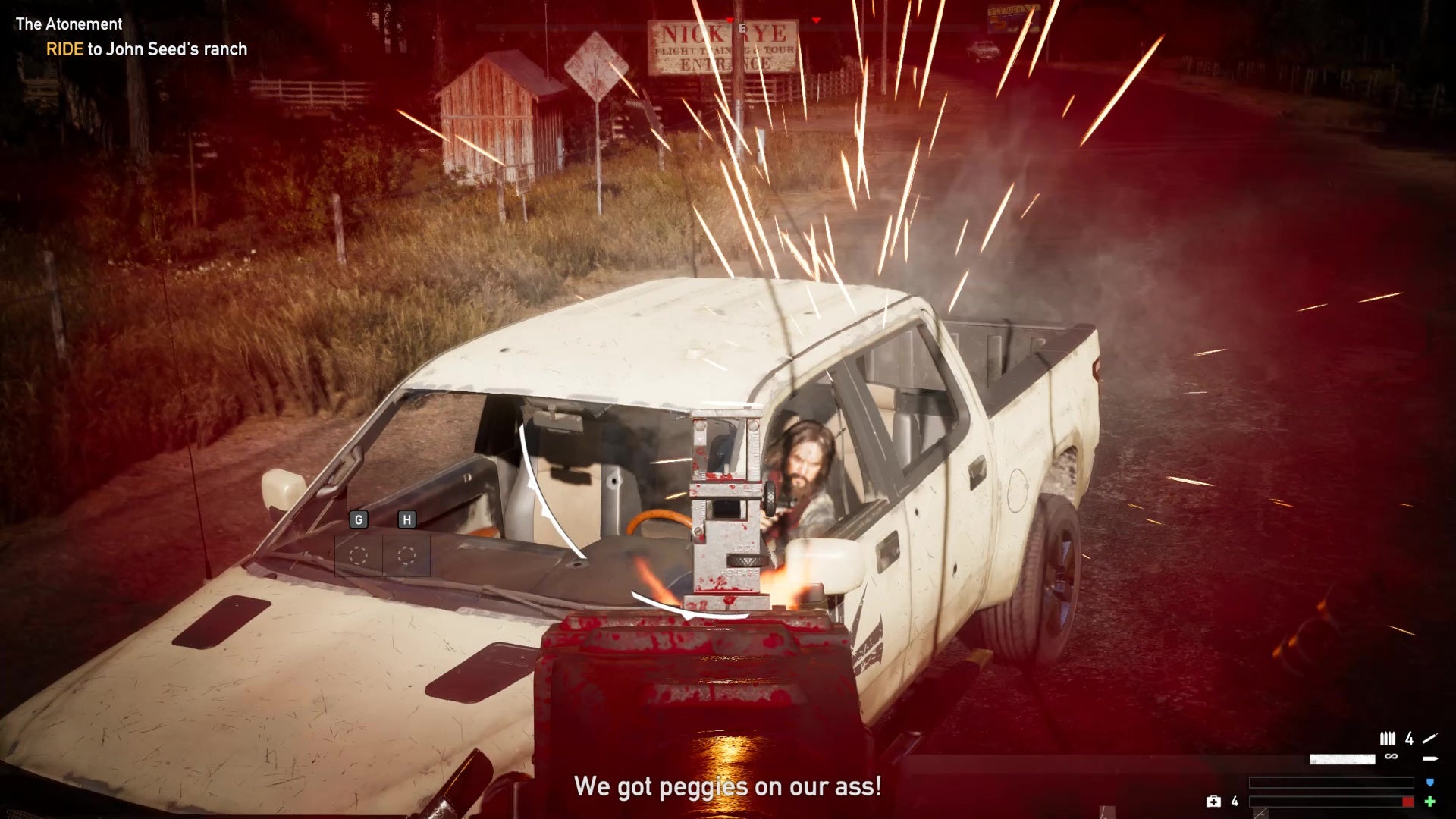 Nothing worse than having peggies on your arse.

I got on the turret, after which followed one of Far Cry 5‘s dreadful driving sequences, in which I tried to shoot a bunch of bad guys from the back of the car while being pegged with bullets I couldn’t dodge. Like the scripted chase sequence in the game’s intro, this one was basically a war of attrition to see if I could get to the end without running out of medkits.

In a turret, I couldn’t even lean in and out of the car. Particularly on hard difficulty, those types of scripted chases are the opposite of the free-flowing, improvisational mayhem that makes Far Cry games so fun.

I died, of course, and was kicked back to a checkpoint just before the chase began. I was standing in the truck’s turret, but we weren’t moving. 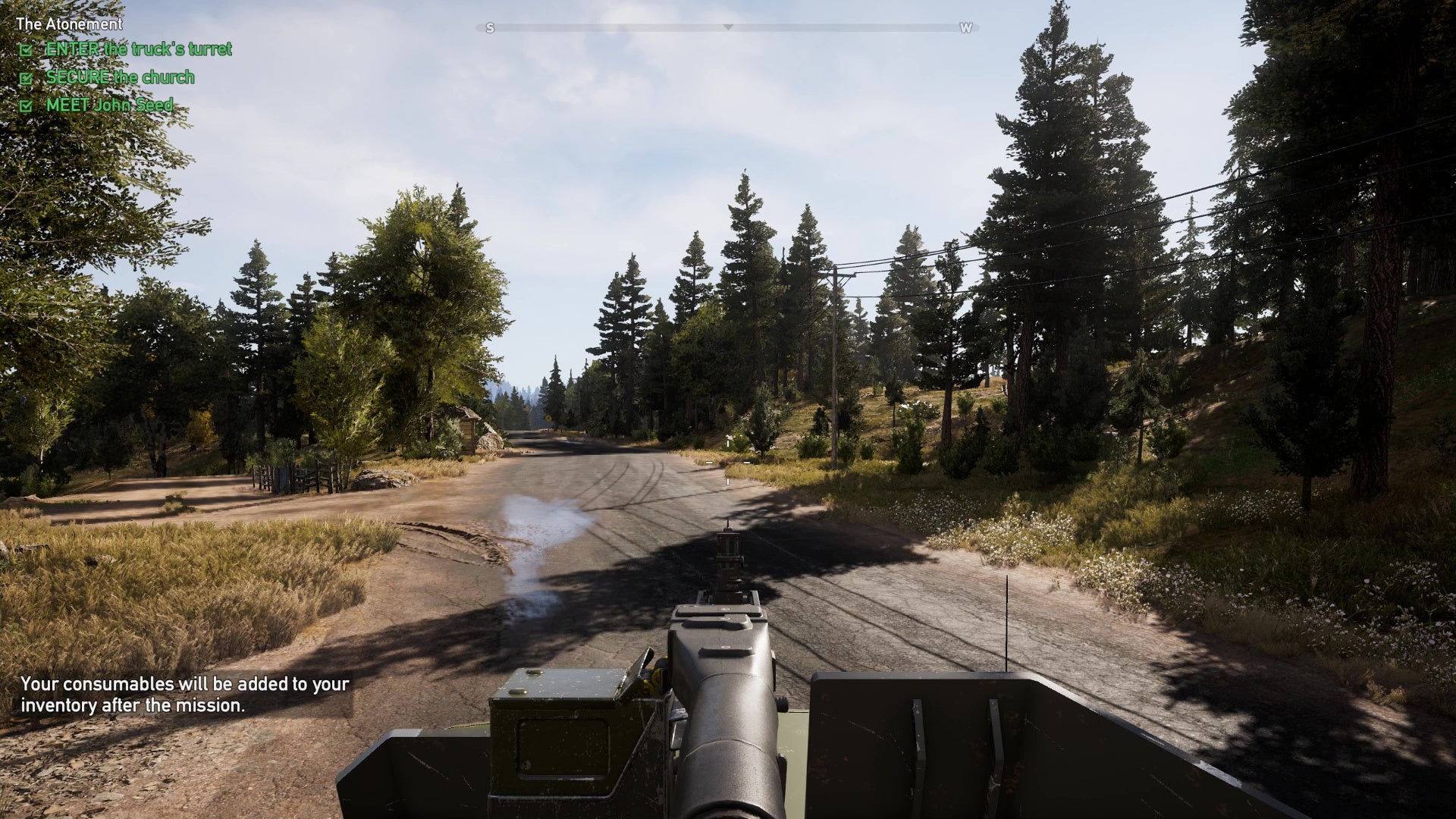 Mary May wasn’t behind the wheel. In fact, she was nowhere to be seen. I stood there for ten seconds or so, and the truck still didn’t move. I tried to get out of the turret, but found I was locked in. The only thing I could do was look around and shoot the gun.

After another few seconds, I figured this must be a bug. Mary May simply hadn’t spawned where she was supposed to be. I’d have to quit the game and hope that it saved my checkpoint.

I quit the game, and of course, the game did not save my checkpoint. I had to start the quest over, which meant sitting through the unskippable cutscene where John Seed holds me down and carves into my skin, then forces Nick to pledge his loyalty, then rips a chunk of skin off of Nick and nails it to the wall.

Again I grabbed the gun hidden inside Jerome’s bible, and again we fought our way free. Again Mary May hopped in the truck with the turret. Hurry up, let’s go get him!

I got in the turret again, started the chase again, and died again. 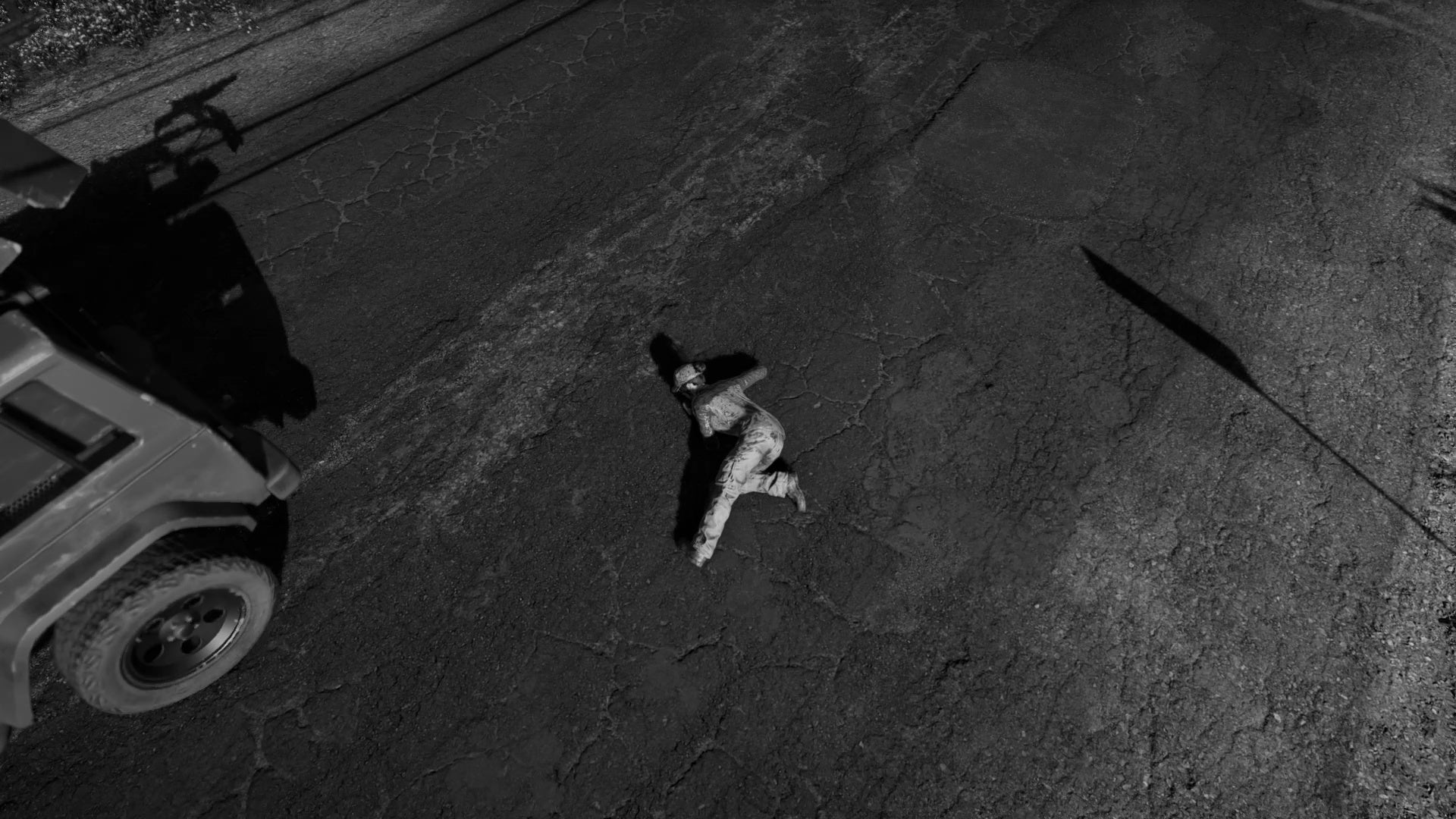 After my death, I found myself back in the turret, and … damn, still no Mary May. I still couldn’t leave the turret, and my truck still didn’t have a driver. This time I decided that instead of restarting, I’d just sit there as long as I could. After about a minute, I got a game-over screen: I had “failed to protect the truck.” OK.

Once more I was standing in the turret, still with no driver. I began to look around me, just to see what was going on. I looked off to the horizon, trying to spot John Seed’s convoy. I turned and looked back at the town of Fall’s End and… wait a minute… is that… 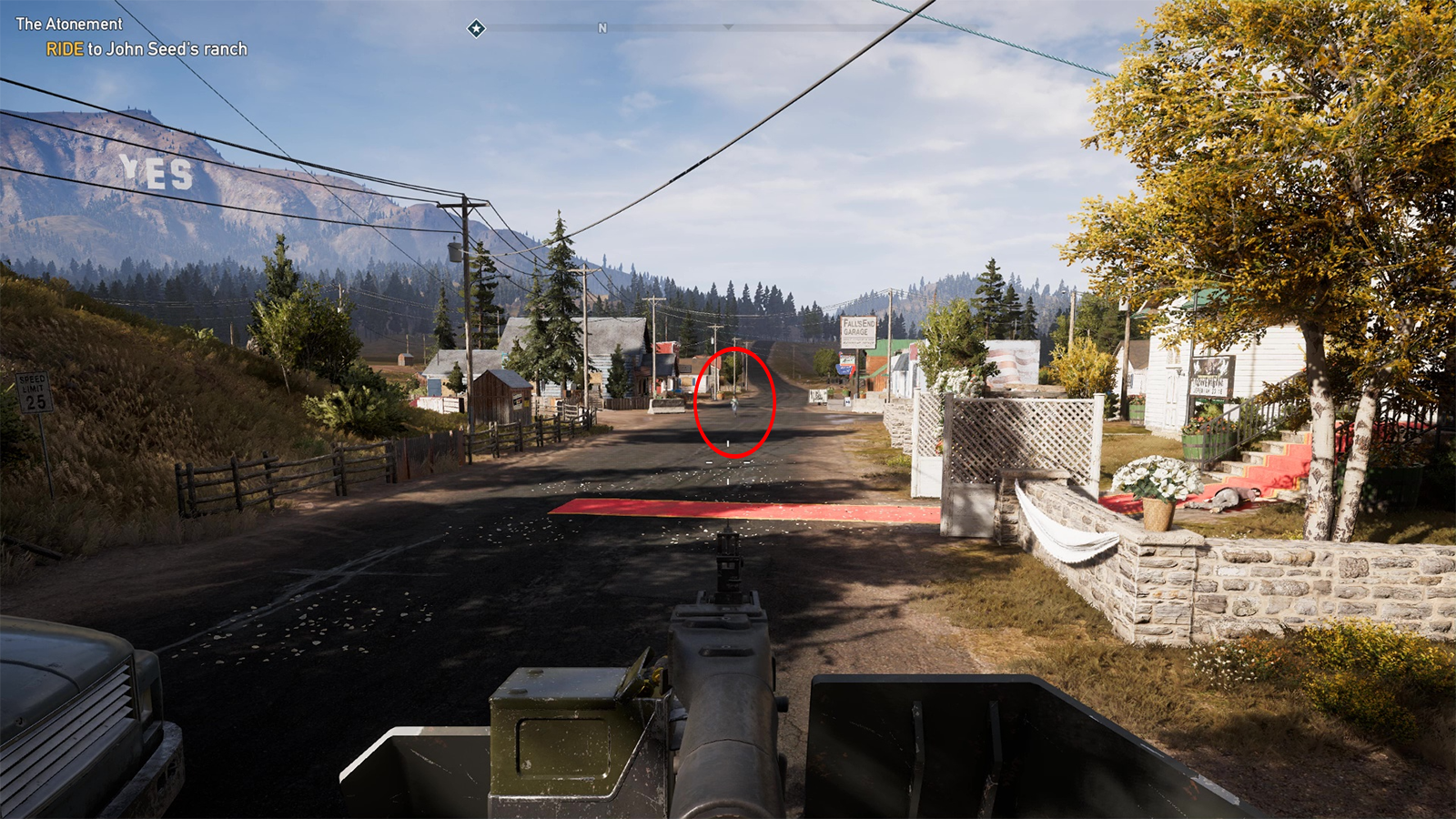 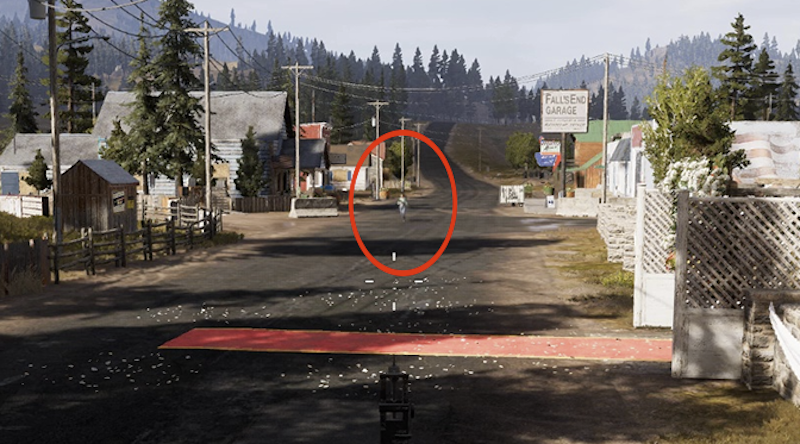 Holy shit, it was Mary May! She was slowly jogging toward me from across town. She lives! And apparently, the game spawned her in a good half mile away from where she was supposed to be.

As the soundtrack pulsed and the bad guys got away, Mary May slowly jogged across town for like a full minute before arriving near my truck and just… standing there. And standing, and standing, until, just as she turned and headed toward the truck, the mission timer ran out. 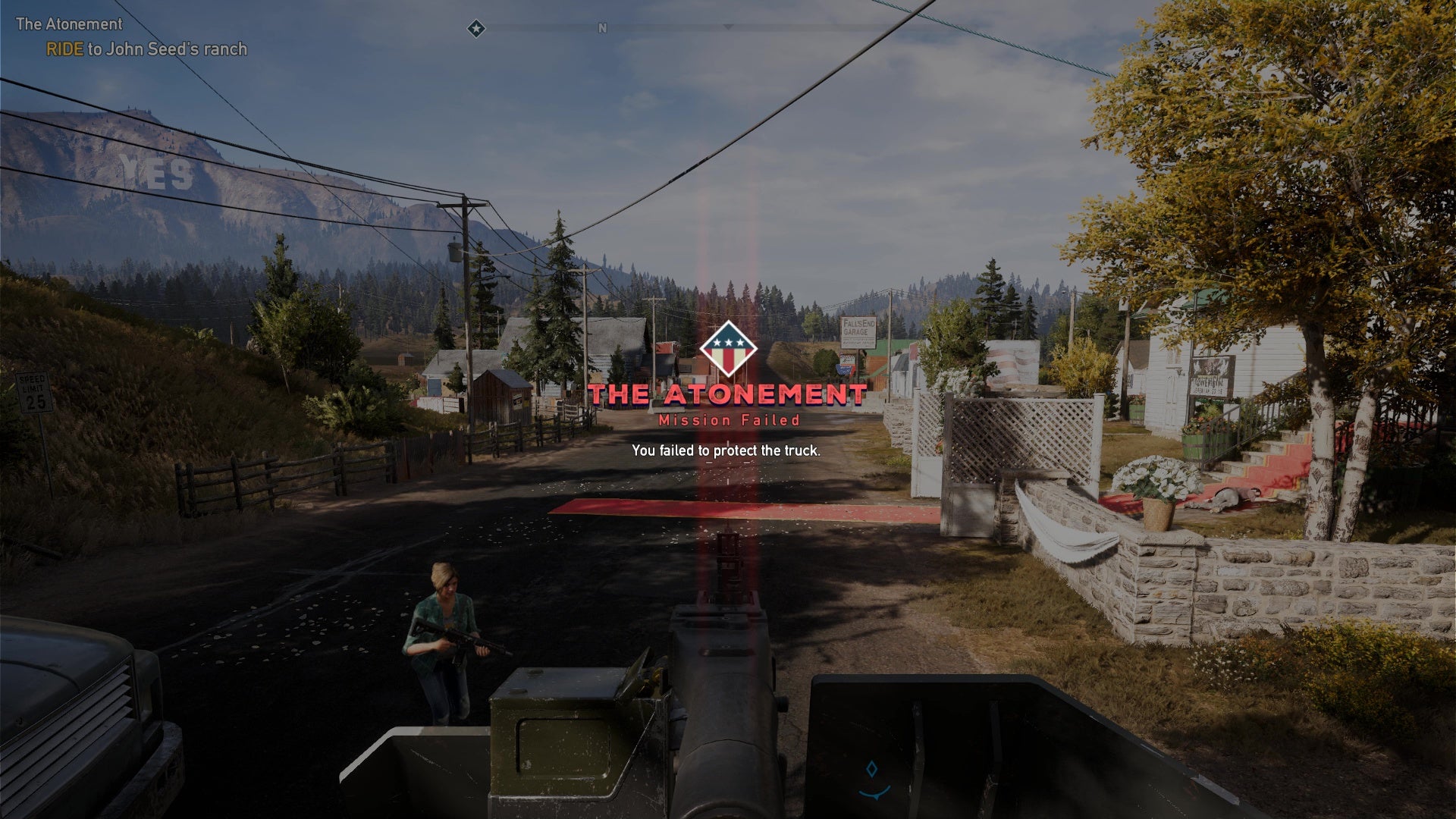 The checkpoint reloaded, and there I was again, in the turret. There Mary May was again, on the other side of town, slowly jogging my way. When she got to me, she waited in place, and I failed the mission.

I didn’t see a way to break the loop. Was I doomed to repeat this forever? Would I have to restart from scratch and keep rewatching the entire opening cutscene until I beat the chase sequence without dying? Or maybe this was some sort of Groundhog Day-like test, and before I could move forward, I had to learn something important about myself?

So far, the only thing I’d learned about myself was that I really wanted this story mission to be over so I could get back to sneaking through the woods with my dog.

A couple more times I watched Mary May jog up the street, stand in place, and cause me to fail the mission. Then I had an idea. What if… maybe… I shot her?

I tried it, and IT WORKED. By shooting her, I apparently interrupted the pause at the end of her jog, which got her to get to the driver’s seat more quickly. She started driving just before the mission timer expired, and that broke the loop. I could play the rest of the chase sequence.

I died again, of course, and was thrown back to the driverless truck. This time, I knew that the key was to shoot Mary May as soon as she stopped. I waited for her to jog across town. When she stood still, I shot her. She got to the truck before the timer ran out and started driving.

That became my routine: die, wait, shoot Mary May, begin the chase. After a few more tries, I made it through the car chase, arrived at John Seed’s compound, and took him down. Holland Valley was liberated, and the people of Fall’s End rejoiced. 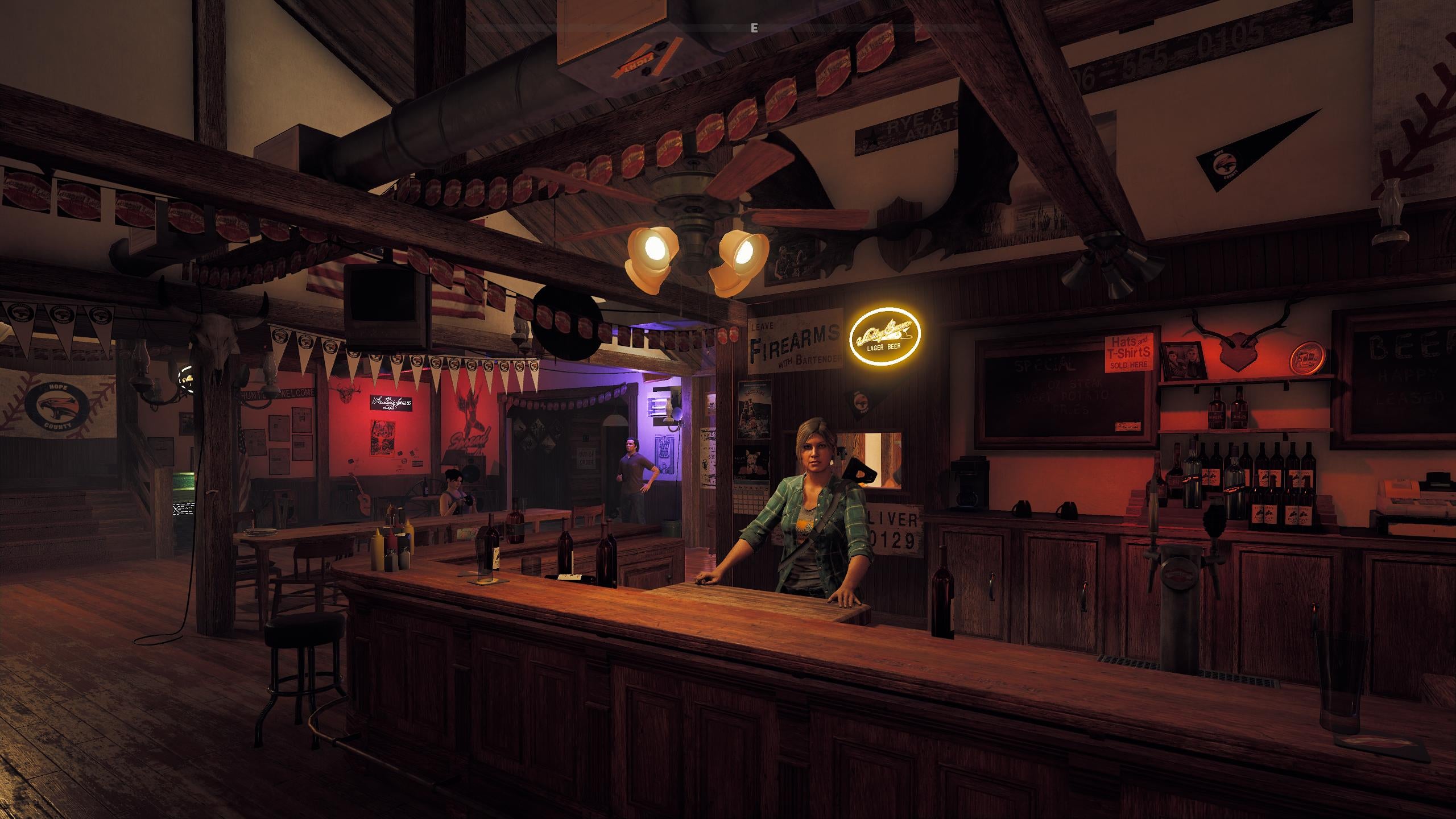 Nowadays when I see Mary May, she’s standing behind her bar, ready to pour drinks or provide idle banter. I want to tell her I’m sorry for all those times I shot her, but of course, Far Cry 5 offers me no way to do so. I’m sure she understands.