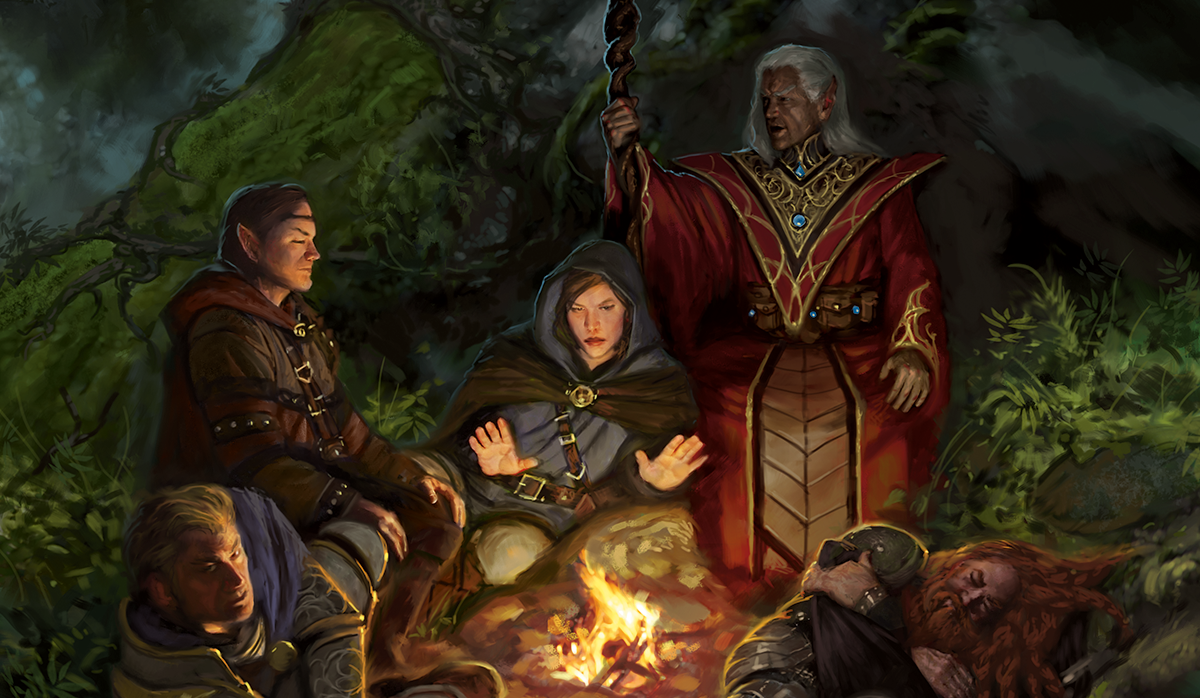 My Dungeons & Dragons group is at the midpoint of our campaign, so we've been trying to do something new for a few sessions. We've had another player take over as DM for a little while. We've been telling him how much we want to do more roleplaying, so last night he let us roleplay to our hearts' content. It was a disaster.

The person taking over as DM is still getting his bearings running games. Before this session, he asked for some feedback on his style, and we all told him we want to roleplay more.

In our last session, our DM set up a situation where we'd have to roleplay and make what he thought was a fairly easy moral choice. We spent two hours trying to decide what to do.

We had decided last session to take up a quest to retrieve a magical sword from a keep outside of town. We also had to try to convince the noble family guarding the keep that they should rejoin the town.

We wanted to do this because the noble family was particularly vulnerable as there were no adult heirs, just a four-year-old being raised by some male relatives. Our group had taken to calling him the baby king, despite the fact that he was neither a baby nor a king.

On our way to see the baby king, we met up with an old woman who said her family had been slain by yetis, even though we all knew that yetis were mostly docile creatures. We took her in, and once we made it to the keep, lo and behold, she was not actually an old lady, but a witch who wanted to capture the keep for her own.

At first, we were all pretty into this old lady's argument. Her name was Gritha, and she said that nobles didn't have the right to declare their ownership of land. Both in and out of character I think that all property is theft, so I was into that.

It became clear that she wasn't actually into liberating the keep for the proletariat, but more into the idea of taking the keep and then killing anyone who came by and also taking their shit. None of us liked that as much.

It should be noted that we were all roleplaying as a bunch of arseholes. After seeing the Met Gala, one of us had made a joke that we should play a campaign where Rihanna was pope, and we ran with it.

We made characters based on costumes from the Gala, or just ones that seemed in line with Robyn Rihanna Fenty's lusty, murderous persona. One of us was playing a character based on Zero Two from Darling In The Franxx. Another played a character who spent the entire session tapping at her glowing "eye stone" device.

I was playing a Paladin inspired by Zendaya's Joan of Arc look and was the only one with a Good alignment.

Nevertheless, after a little bit of mezcal, I joined the rest of my party in asking question after question, trying to divine a "right" answer to this conundrum.

We didn't want anyone to murder the baby king, but maybe a bunch of weird old men shouldn't actually own this keep and charge a fare to use the bridge. What if we asked the witch to kill everyone but the baby king? What if we used this opportunity to try to convert her to our Rihanna-centric religion?

I really wanted to know the specifics of Gritha's philosophy, but after some pointed questions about the specific tenets of her anarchism I realised it wasn't actually that deep. After a while, one of my friends said that it seemed like we got mixed up in some drama that had nothing to do with us, and we should just leave.

But we didn't leave, we stayed, and we kept asking questions. Maybe we should ask Gritha what her sign is? Our DM dutifully told us she was a Capricorn, frustration visible on his face.

After two hours of this, we decided to side with Gritha, albeit reluctantly. We really needed the magical sword, and we couldn't see any other way into the keep, which had a heavily-guarded entrance.

On our way up, my friend decided, what the hell, let me just push Gritha off the edge of this cliff. This plan was not discussed with anyone, but it was perfectly in character. Suddenly, we were besieged by arrows, and we all ran up to the keep screaming for the baby king to let us in.

Once we made it to the keep and met the baby king, none of us were really sure we made the right choice. He was indeed being raised by a bunch of weird old men in what was basically a guard tower - hardly a place to raise a child.

This, of course, was the point. In some situations there is no right choice, and you have to deal with the consequences. I hope our DM learned something from this experience trying to herd a bunch of cats into making a choice.

As I think of ways to liberate the baby king in our next session, I'm pretty sure I've learned absolutely nothing.