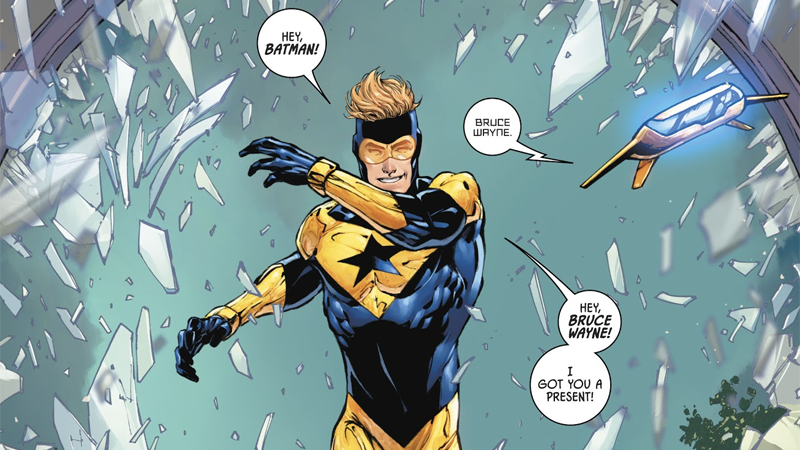 Booster Gold is known for being a bit of a screwup in the DC Comics universe. But his latest attempt at having something go right for himself has gone very, very wrong. And he’s pulled Batman and Catwoman into the mess.

As you’re probably aware at this point, Batman and Catwoman are getting married – and the big day is getting closer and closer. And, as is the tradition, gifts are being bought for the happy couple that seemingly already has everything. So what’s poor Booster Gold meant to get Bruce and Selina?

The current arc in the last few issues of Batman (by Tom King, Tony S. Daniel, Sandu Florea, John Livesay, Tomeu Morey and Clayton Cowles) shows us that Booster goes big – really big. He changes the timeline by rescuing Thomas and Martha Wayne from their deadly fate in Crime Alley so that Bruce’s parents can watch their child be married. Sweet, right? 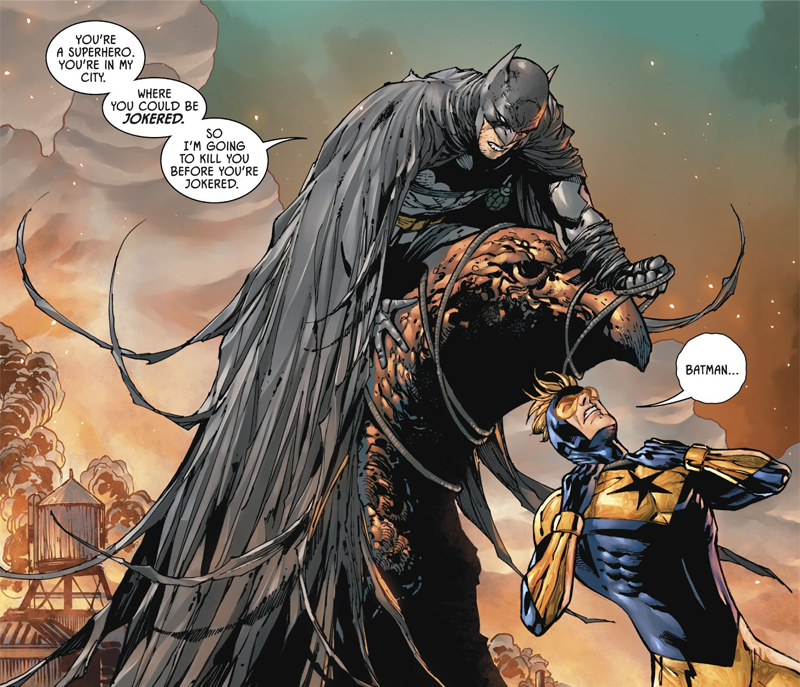 Booster’s choice warps the entire timeline into a dystopian alternate reality: Gotham burns as Dick Grayson, operating in the Batcowl but as a far more ruthless and heavily-armed Dark Knight, goes to war against gangs of citizens transformed by Joker toxin into manic murderers. Pretty much every superhero around has either succumbed to the Joker toxin and been driven mad, or was killed in an interstellar mission gone wrong.

Sure, when Booster – alarmingly, desperately chipper for a man who’s inadvertently turned reality into a waking nightmare – eventually finds Bruce, he’s alive and well, celebrating his birthday with his mother and father at his side. But it’s only through Bruce that Booster really realises the true extent of how big a mistake he’s made. 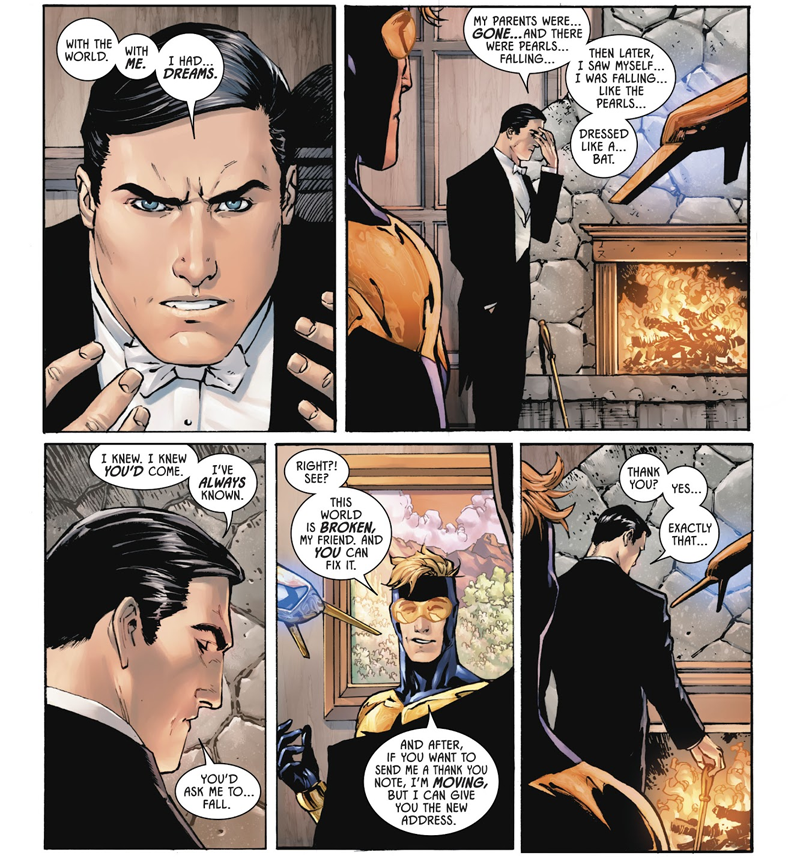 Booster, buddy, how did you really expect this would go down after what you’ve done to the poor guy? Image: Tony S. Daniel, John Livesay and Tomeu Morey (DC Comics)

Because Bruce doesn’t see this timeline as a gift, but instead, simply as his life – a life he’s far from willing to give up just because some madman in a blue-and-gold suit showed up to tell him that it wasn’t meant to go down like this.

Bruce intuitively understands that the dreams he’s been having – a life where he puts on a lonely mask and fights crime – are actually the horrible truth of who he’s meant to be.

So he does the only thing literally anyone except Booster could expect a Bruce Wayne who’s lived a happy, fulfilling life with his family could do. He keeps things the way they have always been for him, destroying Skeets, Booster’s time-hopping AI assistant, to ensure the timeline can’t be changed back.

That only leads Booster to make even more bad decisions in Batman #46, set a year after the previous issue. He breaks Catwoman out of Arkham Asylum, theorising that the love the Selina he knows has for Bruce still applies with this alternate Catwoman, and that love will cause this alternate Bruce to come to his senses and… destroy everything he’s ever known so that the “real” timeline can exist?

Look, it isn’t a great plan in the first place, but it’s kind of a running theme across these two issues. The Booster we meet here gives off a very uneasy vibe – he’s less comical and more just desperate to do something, anything right, and it leads to him making dangerous leaps in judgement. Such as, say, altering all of known existence for a wedding gift.

But as that goes wrong and as everything spirals worse and worse, so does Booster himself, still chasing that chance to be accepted as someone more than just a jokey screwup. 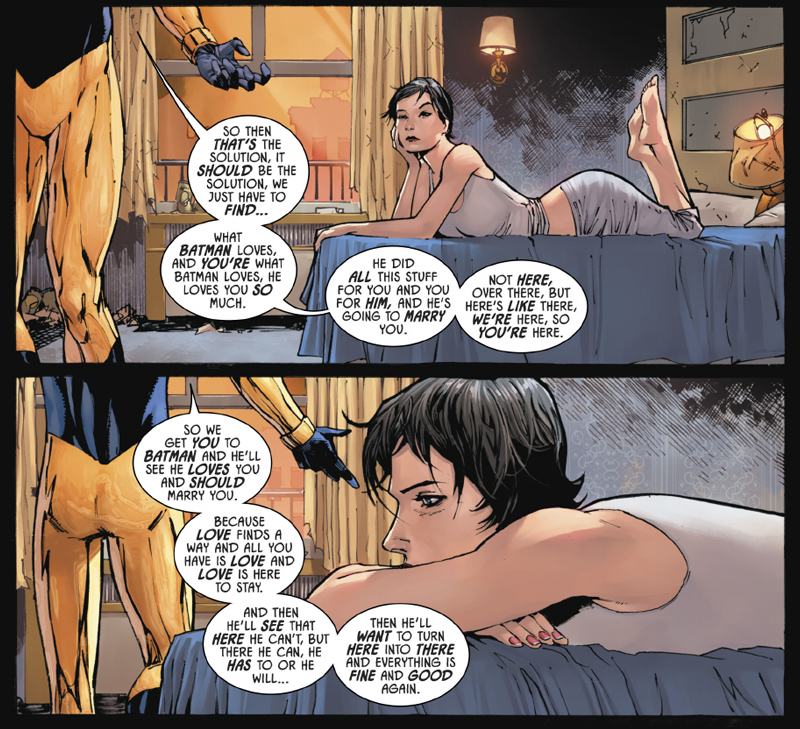 Which means that, in his haste to fix the gigantic mess he’s made, Booster doesn’t realise that the Catwoman he frees from Arkham is not the Catwoman we know on her way to getting married to Batman. This Selina is quiet, only speaking through murmured mewing as Booster takes her along in his desperate plan to make things right.

When Dick Grayson finds them and attempts to kill Selina for her very presence in his city, Booster doesn’t realise that this Catwoman is far from just the roguish thief of his timeline, and must have done some awful things to warrant this Batman’s ire.

So when Booster brings Catwoman to the Wayne Mansion for what he thinks is going to be the cure for all the ills he’s caused, things don’t go as he planned, because how could they have possibly gone as he planned? It was a plan based on his desperation to un-fuck everything he’d fucked up (for a wedding gift!), rather than one based in the grim reality he now finds himself in. So instead, everything goes disastrously wrong. 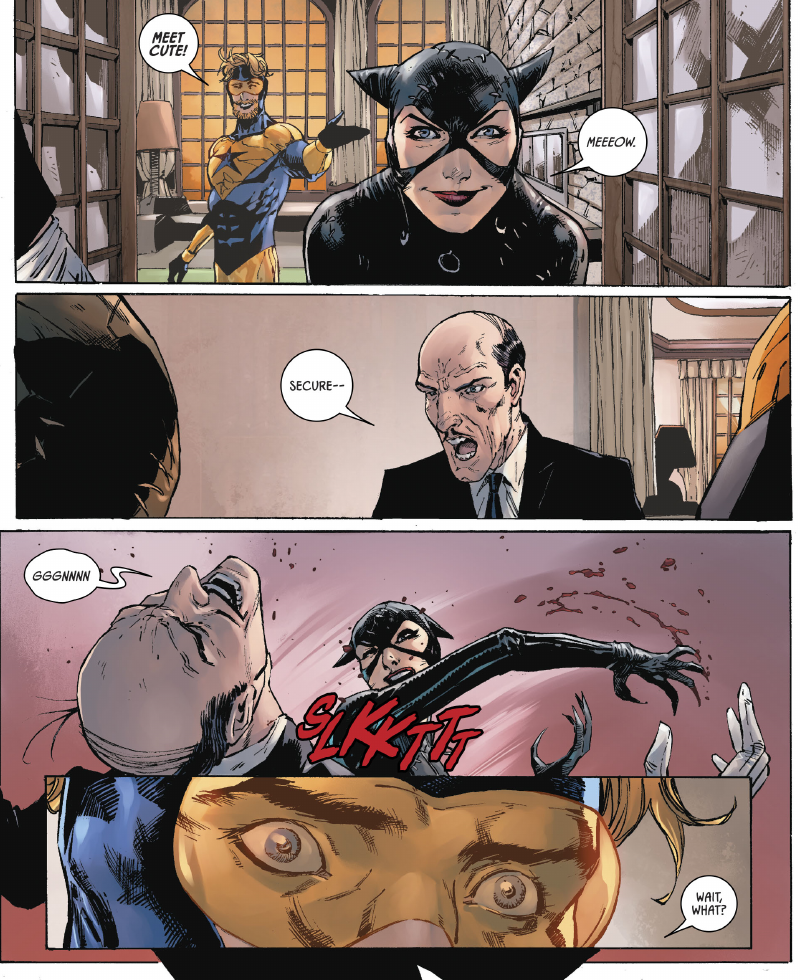 I should probably note that, amazingly, Batman #46 also introduces the iconic Michelle Pfeiffer Catsuit from Batman Returns into DC comics canon. The reason? Booster makes Selina a catsuit out of leather scraps to meet Bruce in, hoping it’d spur his memories of the main timeline. But, like with most things, Booster Gold sucks at sewing as much as he does at not fucking up time itself, which is why it looks the way it does. Image: Tony S. Daniel, Sandu Florea and Tomeu Morey (DC Comics)

Like, as wrong as it could possibly get. The crazed Selina slashes Alfred’s throat, before mauling Thomas Wayne to death. When Dick Grayson shows up and opens fire, the crossfire leads to Catwoman, Martha Wayne and even eventually Dick himself taking seemingly fatal bullets, as a horrified Bruce watches the bloodbath unfold.

So now Booster’s “gift” has caused Bruce Wayne to experience a life-changing trauma all over again – one that is now just as difficult to undo as the one that transformed Bruce into Batman in the first place.