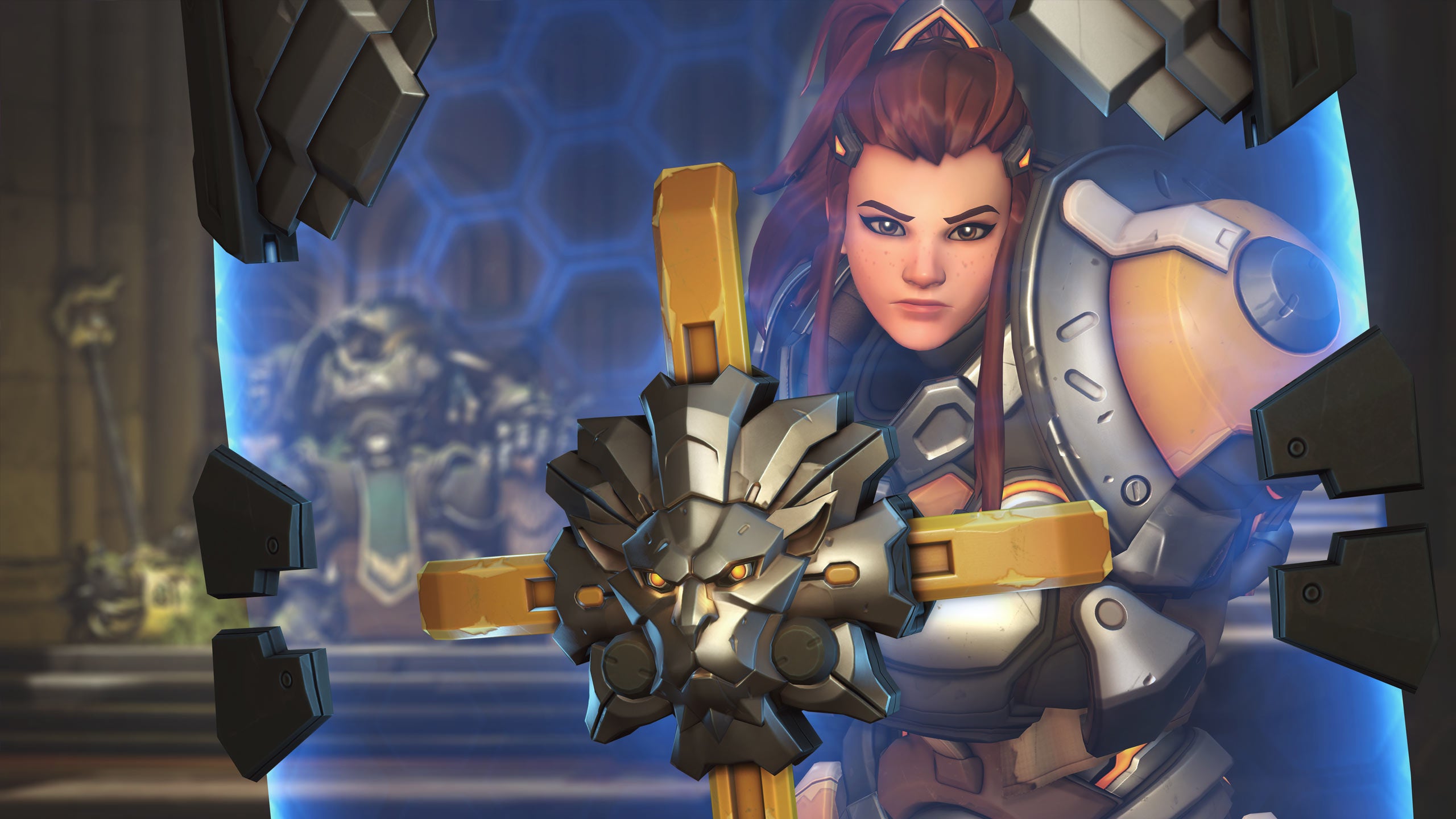 If you're a big ol' block of meat hoping to hunker down on the frontline, consider yourself on an involuntary hunker strike. Brigitte is highly adept at wading through shields and using her bash ability to stun tanks, especially main tanks like Reinhardt.

Want to retaliate with your giant hammer or ape science lightning gun? Not so fast. Brigitte can also use her flail's whip shot ability to knock you back and create space, shortly before stunning you again.

These things aren't unavoidable, but if Brigitte is paired with another knockback-intensive hero like Doomfist, the situation can become pretty dire.

Reinhardt is basically helpless here, getting alternately stunned and bounced around like a tennis ball in a crowded dog park. Situations like this have led players to worry that Overwatch is becoming too focused on stuns, knockback, and other crowd control abilities. These can be frustrating to deal with because you're temporarily helpless if somebody lands one on you.

"The majority of my placement games today consisted of at least half of the team being heroes with some sort of CC [crowd control] ability," said a player named beepboopextrascoop in a Reddit thread.

"These heroes usually were Roadhog, McCree, and in every single game, Brigitte. I can deal with hook and flashbang, but when you have some Swedish chick charging at you spamming every ability key on her keyboard and being able to displace you with everything she can do, that's when it pushes me to the edge."

Overwatch League analyst Brennon Hook was less-than-analytical with his take, but equally annoyed. "You might as well just get rid of main tanks in this game," he said during a recent stream.

"There's no point in having them. They just get blown up ... Like Brigitte, you get stunned out of your fucking mind. It just makes no sense."

It doesn't help that tanks can already be hard to come by, especially when players are solo-queuing instead of rolling with larger groups. If tanks are miserable due to the latest round of changes, they're less likely to play, making things rough on other players, too.

"Good luck getting your tank player base back now," said a Reinhardt main named SpaceCowboy on the official Overwatch forums, "because if I am quitting tanking, I don't think much more people are left, and I can see that in my games."

Players on Overwatch's official forums, meanwhile, will take any nerf they can get.

Of course, Brigitte hasn't even been in competitive for 24 hours. It's clear that she's shaking up the previously stale meta - making life difficult for flankers like Genji and Tracer as well as tanks like Reinhardt and Winston - but she's not uncounterable.

She's slow and melee-oriented, leaving her open to attack from mobile characters with range or a good old-fashioned explosive barrage from Junkrat or Pharah. There's also something to be said for a Reinhardt paired with a Zarya, who can bubble-shield Rein and render Brigitte's stuns ineffective.

Once she's out of place, Rein can flatten her. Orisa, meanwhile, is probably the most viable main tank at the moment, given that she has an ability that temporarily negates stuns, allowing you to bait Brigitte, get her to blow her ability, and then lay waste to her.

Heck, Brigitte can even be an asset to Reinhardt when they're on the same team, as demonstrated by Houston Outlaws tank Austin "Muma" Wilmot:

Muma's team's Brigitte stuns the enemy Reinhardt, and then Muma, playing Reinhardt for his own team, runs roughshod over everybody. This kind of strategy, however, can still be annoying for Reinhardts, as it does not solve the problem of him getting stunned and bounced all the time.

"This is called the 'I will still be bounced around like a ball in a game of beer pong, but now their main tank is too so we can be sad together' strat," said a player named Extremiel on Reddit. "It's solid."

Again, though, Brigitte's a new addition to the roster - an agent of chaos in a meta that, not too long ago, people were decrying for being too stale. Now change has beaten down their front door, and they're not happy about that, either.

It's The Cycle of Video Games, which is a lot like The Circle Of Life, except with less lions and more yelling. In a couple weeks or a month, things could look totally different. Everybody might be running comps that render Brigitte useless.

Until then, it seems that tanks will just have to do what they have always done when under pressure: grin and bear it.