featuregod of warkotaku game diary
To sign up for our daily newsletter covering the latest news, features and reviews, head HERE. For a running feed of all our stories, follow us on Twitter HERE. Or you can bookmark the Kotaku Australia homepage to visit whenever you need a news fix.

Assassin’s Creed Origins: A game whose many patches I’ve enjoyed.

Upon turning on my PS4 most days, I hope to hear the telltale trill that one of my games has been updated. A patch! My game has changed! Hopefully for the better.

I have bought into the idea that games are not unchanging things. I have embraced the concept that the games I buy will evolve. In so doing, I’ve possibly contributed to a climate where it is more acceptable for publishers to release games that have numerous bugs, though I suspect that older games could have benefited from a lot of the post-release tweaks modern games get.

This morning, I turned on my PS4 and heard the few-note ring that indicated that Assassin’s Creed Origins was updating. Exciting! My game is evolving again! In the past, that’s meant the addition of a New Game Plus, the introduction of free quests meant to hype new modes or add-ons or just a change from an annoying blue square to a beautiful gold one.

On PS4 you can highlight the icon for your game, hit the options button and read the “update history,” which details major changes brought by a new patch. If you’re convinced your game should have been patched, you can click “check for update” and it will find any patches your game needs.

My PS4 will automatically pull down patches for games I’ve recently played, but not for older ones. Yes, I sometimes flick over to older games still saved on my system just to see if they have an update to download.

I’m sure some of my enthusiasm for checking patches is due to my job. If a game changes, the change might be news for Kotaku. I’ll see a Swords of Ditto patch, for example, notice a major alteration to the game’s systems and signal a staff writer to check it out. 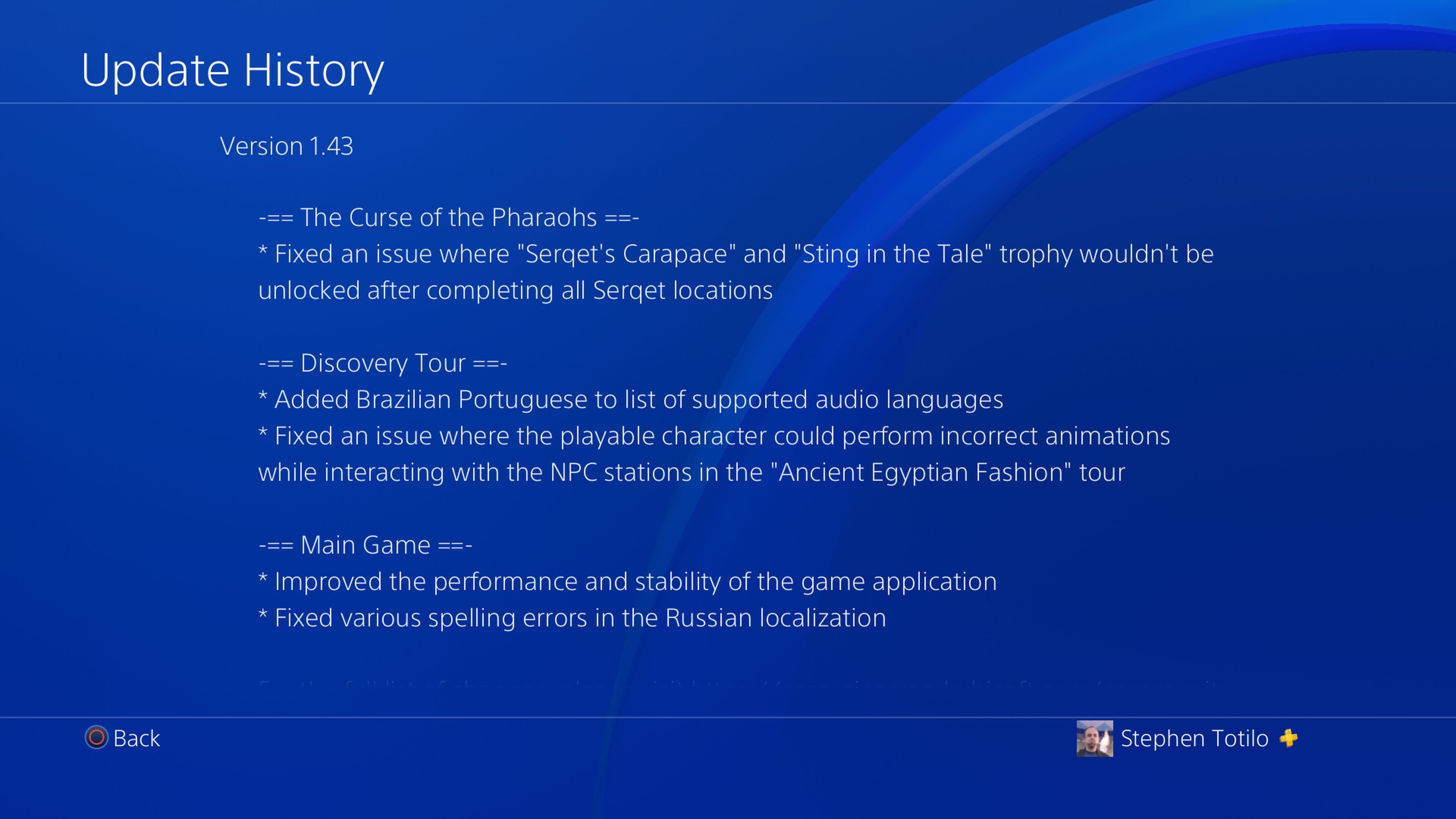 I don’t play games on PC very often, but I do play on my Switch and Xbox One. Those systems are subtler about how they indicate incoming patches. As best I can tell, those consoles don’t detail what’s changed in a patched game. I shouldn’t care about this that much, but I do mind a little.

I like knowing my games are improving and changing, and I like to know how. Yes, I can always look up the patch notes online. (About a year ago, during a meeting with Xbox reps, I mentioned that it’d be nice to see patch notes on the system. They nodded and maybe took a note, but, alas.)

If you like game updates too much, then, as with most things you invest excess enthusiasm in, you’re bound for disappointment. Even though I know that Assassin’s Creed Origins is done getting major updates, that the game’s publisher seems to have moved on to other things, I was hoping the new 1.4.3 patch would have something exciting. It doesn’t, at least not for me.