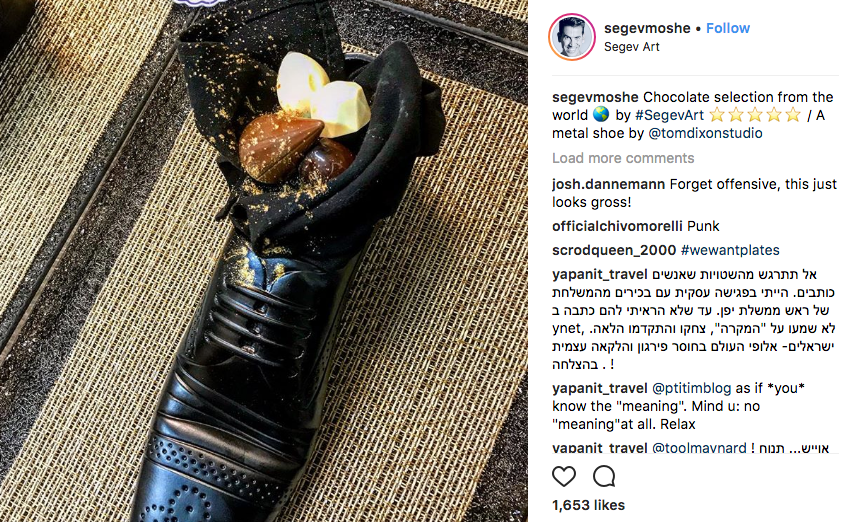 The Jerusalem Post and The Washington Post reported that Japanese diplomats were "appalled" by the "offensive dessert".

"If this is meant to be humour, we do not find it funny. I can tell you that we are offended for our prime minister," a Japanese diplomat is quoted as telling newspaper Yediot Aharonot (via The Jerusalem Post).

Moshe is a rather avant-garde chef, as evident by these other creations:

So, chocolate in a shoe doesn't seem totally out of place for what he does. Tone deaf, maybe, but not out of place.

"This was a stupid and insensitive decision," an Israeli diplomat, who has experience serving in Japan, also told Yediot Aharonot (via The Jerusalem Post).

"There is nothing more despised in Japanese culture than shoes. Not only do they not enter their houses while wearing shoes, you will not find shoes in their offices either. Even the prime minister, ministers and members of parliament do not wear shoes to work... It is equivalent to serving a Jewish guest chocolates in a dish shaped like a pig."

Well, yes and no. Let's put this into context before getting to the online reactions in Japan.

The Prime Minister and other politicians do wear shoes while in the Diet (I don't know about in their offices). The vast majority of offices in Japan I've visited have employees wear their shoes, but I've been to a few that had staff wear slippers instead. Some restaurants in Japan with tatami mats do have you take your shoes off before entering. Most use tables and chairs, so they don't. At home, however, it's strictly a no-shoes affair.

Traditionally, Japanese houses have had tatami mat floors, and shoes can not only dirty but also destroy the mats. Japanese life was lived on those mats - it's where you sat, ate and slept. This is why famed Japanese director Yasujiro Ozu let up so many low eye-level shots, because much of Japanese home life was spent on tatami. 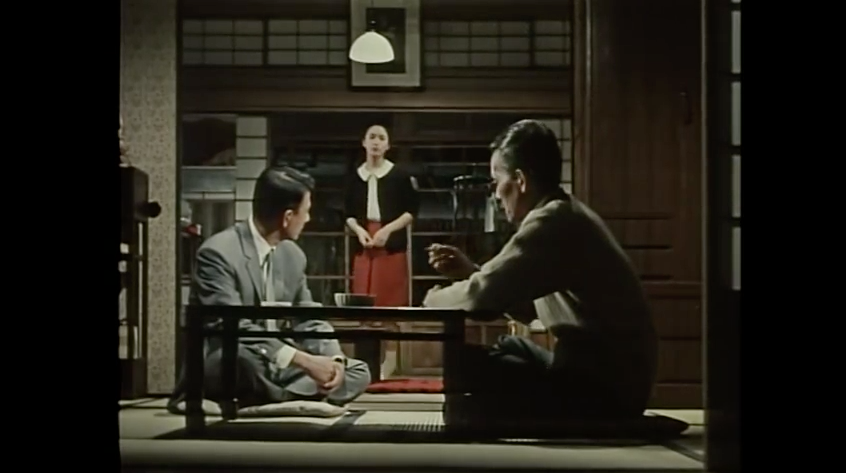 Because of this close contact with the floor, it was something people naturally wanted to keep clean. Even though most contemporary houses don't have strictly tatami floors (some do, but a single tatami room is more common), the practice has continued to keep a clean home. It isn't unusual to have separate house slippers for the bathroom!

With this backdrop, serving up a shoe on a tatami mat might not be the best look, regardless of diplomatic implications.

But is there some intrinsic shoe hating element in Japanese culture? Are shoes themselves really that offensive in Japan?

One of the words for shoes is "dosoku" (土足), which literally means "soil/dirt/earth" and "foot". It refers to outside shoes. The expression "dosoku de" (土足で) means "thoughtlessly" or "rudely".

Which is why, as Kotaku as previously posted, chocolate "kutsu" have gone on sale in Japan for Valentine's Day. I don't recall any fuss or outrage. These went on sale, some people bought them, and then they were eaten. Abstractly, they're just "shoes", and not ones that have been worn outside.

Then, there was a Japanese New Year's television special in which celebrities bit into regular objects to see what was chocolate and what was not. Included were shoes.

More examples of chocolate shoes and things in Japan being served in shoe-shaped containers. 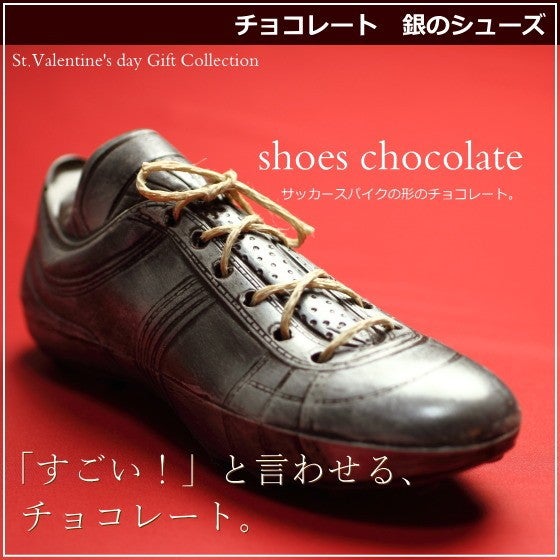 None of this happened in an international diplomatic setting. That's when things get complex.

Diplomatic meetings are supposed to be carefully planned events with participants, no doubt, reading more into things than with normal social interactions. What did the shoes mean? Why was the chocolate put in metal faux shoes? Does this symbolise something?

The official response seems as though the dinner went over fine. The Japanese Embassy in Israel told Yomiuri Shimbun, "We're hearing that [our] Prime Minister and his wife enjoyed the dinner party." The Times of Israel reports that a source said Prime Minister Abe asked the chef to cook in Japan. Both sound like diplomatic things to say, but you have to wonder what Prime Minister Abe really thought.

What we do know is how some people online in Japan viewed the dessert. Here are comments from 2ch, Japan's largest bulletin board. They are not in order or necessarily replying to each other, but did appear in the same thread.

"The assumption was probably that Japanese people wouldn't mind."

"They're making fun of Japan."

"Prime Minster Abe sure put up with that."

"Even around the world this looks rude?"

"Then, are those boot-shaped cups [in Japan] rude, too?"

"I want to think it's all nonsense the moment they all started eating the same thing."

"Let's knock it off with the shoes."

"This is like when a reporter threw a shoe at Bush. It's that kind of thing."

"Now I want to eat chocolate."

"They ate the same thing, so this is harmless."

"Is Israel trying to send a message?"

"They're own Prime Minister is being served this, so I don't think they were being insulting."

"The chef looks pleased with himself."

"Doesn't matter if this is Japan or not. This is outside of global norms."

"Everybody is eating the same thing, so they're not being insulting. It's just bad taste. Why would you serve this?"

"Whatever. That photo op looks good."

"I don't think this appears rude. I think it does look smelly."

"Is this like when that reporter threw a shoe at Bush?"

"If someone put shoes on the table, I'd lose my appetite."

"Lots of people would probably think it'd be no problem if this was a glass high heel."

"I guess it refers to the trouble of going somewhere."

"Less than cynical and spiteful anger, I feel that looks gross."

"If throwing a shoe is an insult, then what does using a shoe [like this] mean?"

"What, people in Israel were upset about this?"

"I guess it could mean 'dosoku de fumikomuna'*." (*Note: I'd translate that as "better mind your own business".)

"I'd understand a child's shoe or Cinderella's shoe, but... a men's shoe? lol"

"Smiling while eating something like this. Diplomacy sure is hard!"

"It has to have a message for Japan."

The Times of Israel reports, "A source close to Segev explained to the paper that the dessert was not served in a real shoe but in metal sculptures by industrial designer Tom Dixon. The artist's website describes the pieces as doorstops."