Omensight Is A Clever But Repetitive Murder Mystery 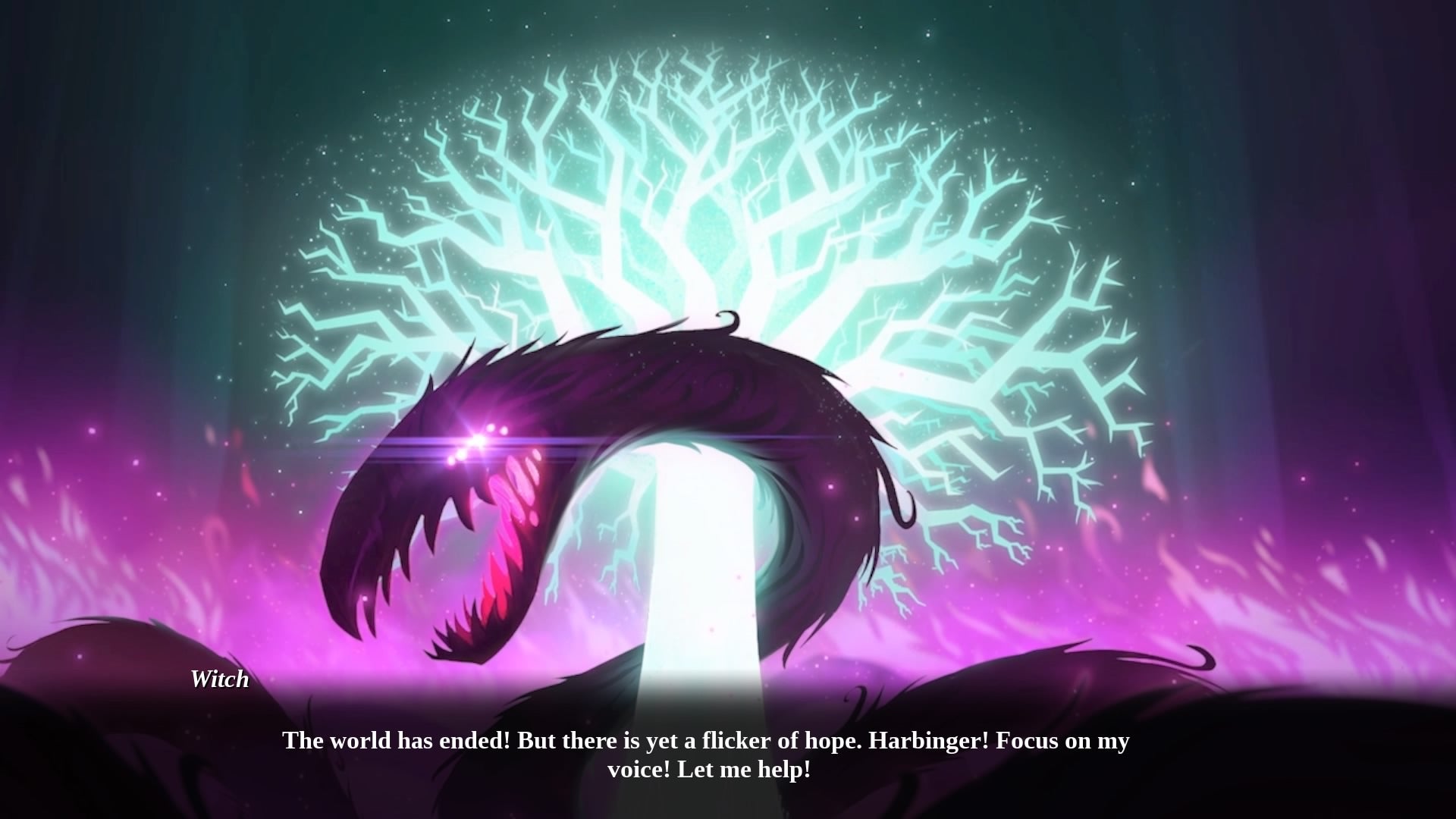 Like many time travel stories, Omensight relies on repetition. In the spiritual successor to the studio's previous game, Stories: The Path of Destinies, you replay the same day's events over and over from different perspectives and with new information.

These loops eventually yield answers to a murder mystery, a lost relic, and a possible means for saving the world. It's compelling and intriguing, but repetition is also what holds Omensight back.

Set in the same universe as Stories but at a different point in time, Omensight's world is torn by a war between different animals. The land of Urralia is divided between the Pygarians, an imperial force led by Emperor Indrik, and the Rodentians, the rebel cause spurred on by Ratika, a minstrel mouse turned folk hero.

At the height of the turning point in the war, the priestess Vera is murdered, and an evil serpent named Voden is unleashed upon the world in a pseudo-Ragnarok.

The player is the Harbinger, who can repeat that fateful day over and over in order to discover a method to stop the serpent. By visiting the souls of four key characters in that day's events, the Harbinger can uncover their roles in the sordid affairs that led to Vera's murder and the war's climax. 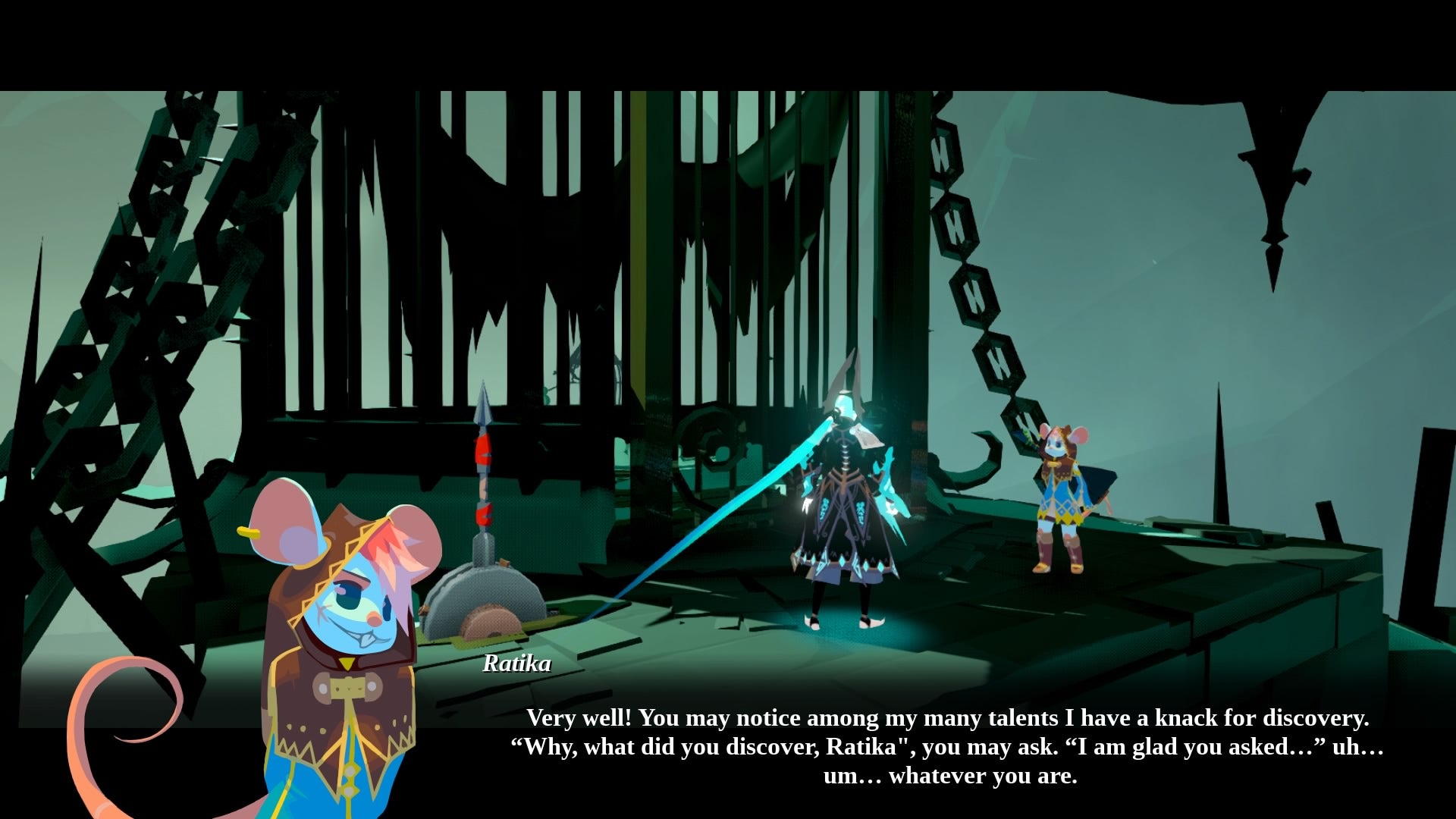 Ratika, the cheeky bard with a heart of gold, was one of my favourite companions to follow.Screenshot: Omensight (Spearhead Games)

This is the core loop of Omensight: start a day with someone, follow them as they divulge information and go about their business, then use that information to move forward with another suspect. Omensight feels very similar in structure to Stories but your role is a little more direct, focusing on uncovering mysteries and interrogating subjects with something to hide.

Since the Harbinger is a silent protagonist, most of the revelation comes from the titular omensights, three (technically four, though it's really a hint more than a major breakthrough) significant moments that the Harbinger learns about throughout the course of the game.

While they cannot speak, the Harbinger can blast these omensights into characters' heads, forcing them to experience the events firsthand and change their course. Where one character might be hell-bent on revenge when you first meet him, a blast of Truth-O-Vision might cause him to mourn his ways and aim for a different target.

Since most of the narrative heavy lifting is left to the non-player cast, it's nice that the writing is able to shoulder the burden. The four main characters — Draga, Indrik, Ratika, and Ludomir — all have their own style and manner of speaking, and over repeated loops you can start to bond with them. The Harbinger just kind of stands there no matter what, but you the player controlling them can really feel for what these four have been going through and the reasons behind their actions. 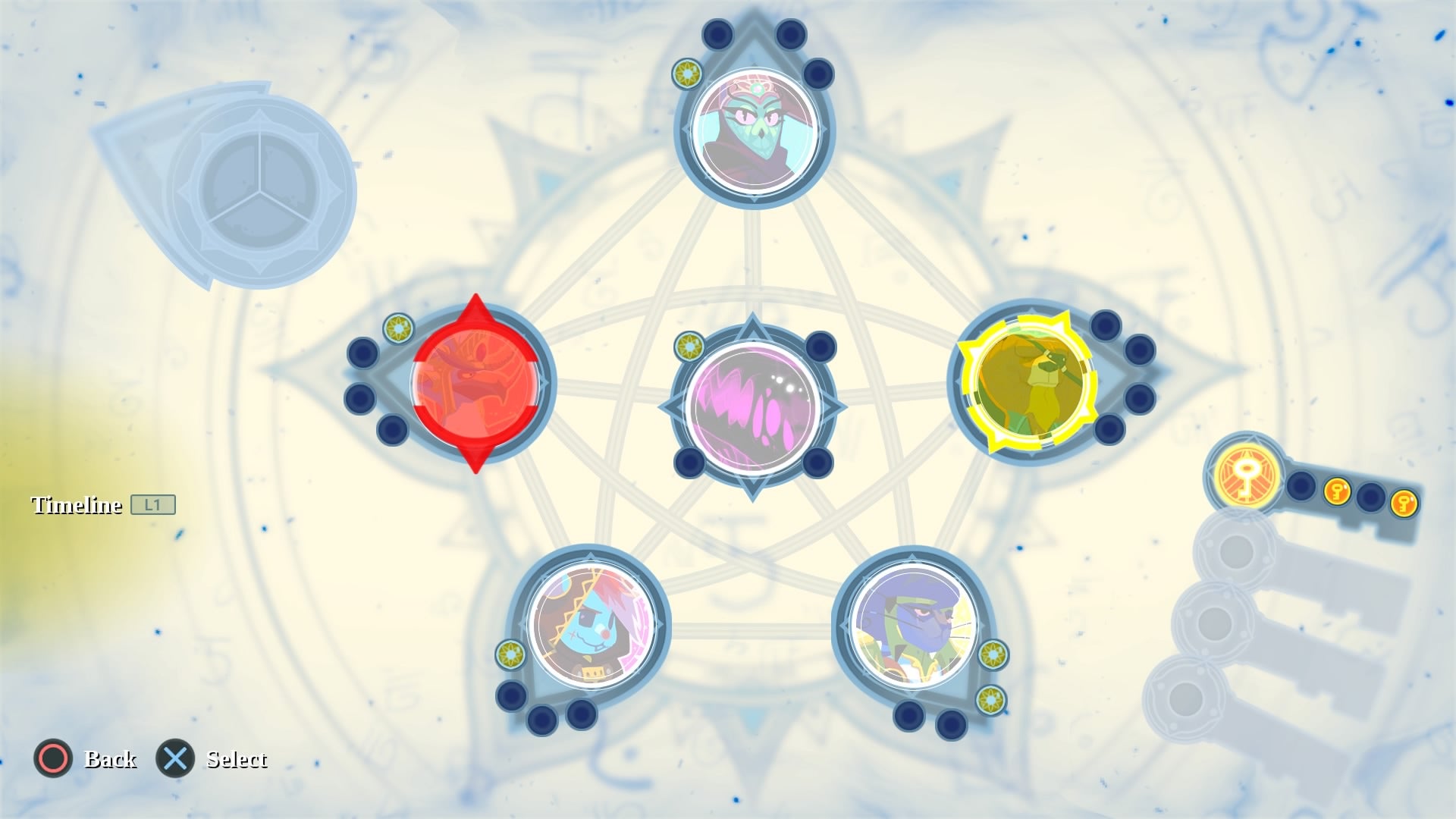 You can choose to play with or without the investigation board, which lets you track the truths you've already found.Screenshot: Omensight (Spearhead Games)

The murder-mystery ends up falling a little short in the end. There are a few leaps of logic you'll have to make, and after a while it doesn't feel weird to be forced to kill someone you were allied with in a previous timeline.

In other places, the game seems content to just state something as fact without reason; a character sacrifices themselves to ascend to an evil, void-ridden state, and there's little reason why except for it's what she did that day. The major "omensight" twists provide a good reason to keep moving between story beats, but I found myself caring more for the characters' reactions to events rather than the events themselves.

It's hard to manage the gap between the Harbinger, the silent, emotionlessly disassociated player-avatar with no stake in current events other than stopping Voden, and your own natural curiosity. While you're driven to care for these characters, you also have to drive your sword through them at times in order to get someone to give up a new piece of info.

Timelines play out in these binaries, with bookend choices to either reveal an omensight to pacify someone or to kill them. The Harbinger is more focused on the larger problem than minor quarrels, so your curiosity has to make do with what little story bits fall off the table at any given impasse.

While running between those major story events, you'll have to fight a number of foes from both sides of the war, as well as the void's monsters, omens of Voden's coming. Enemies grow in strength as you get closer to discovering the truth, using dizzying poison, throwing objects, even creating pillars of flame to deter you.

In response, the Harbinger can learn and level up new skills, using a mixture of time powers and what I could only describe as magic, or a kamehameha maybe, to dispatch greater numbers of enemies.

Due to narrative constraints, Omensight's combat repeats itself. Even though the game offers you the chance to skip to the "critical moment" when replaying the same permutation, Omensight takes place primarily in a handful of locales that don't really alter throughout the day. By the time you reach the credits you've memorized the layout of every room and corridor. After a few fights I knew the spawn order for the enemies and where every trap was. There weren't too many surprises by the fifth or so repetition of the same arena. 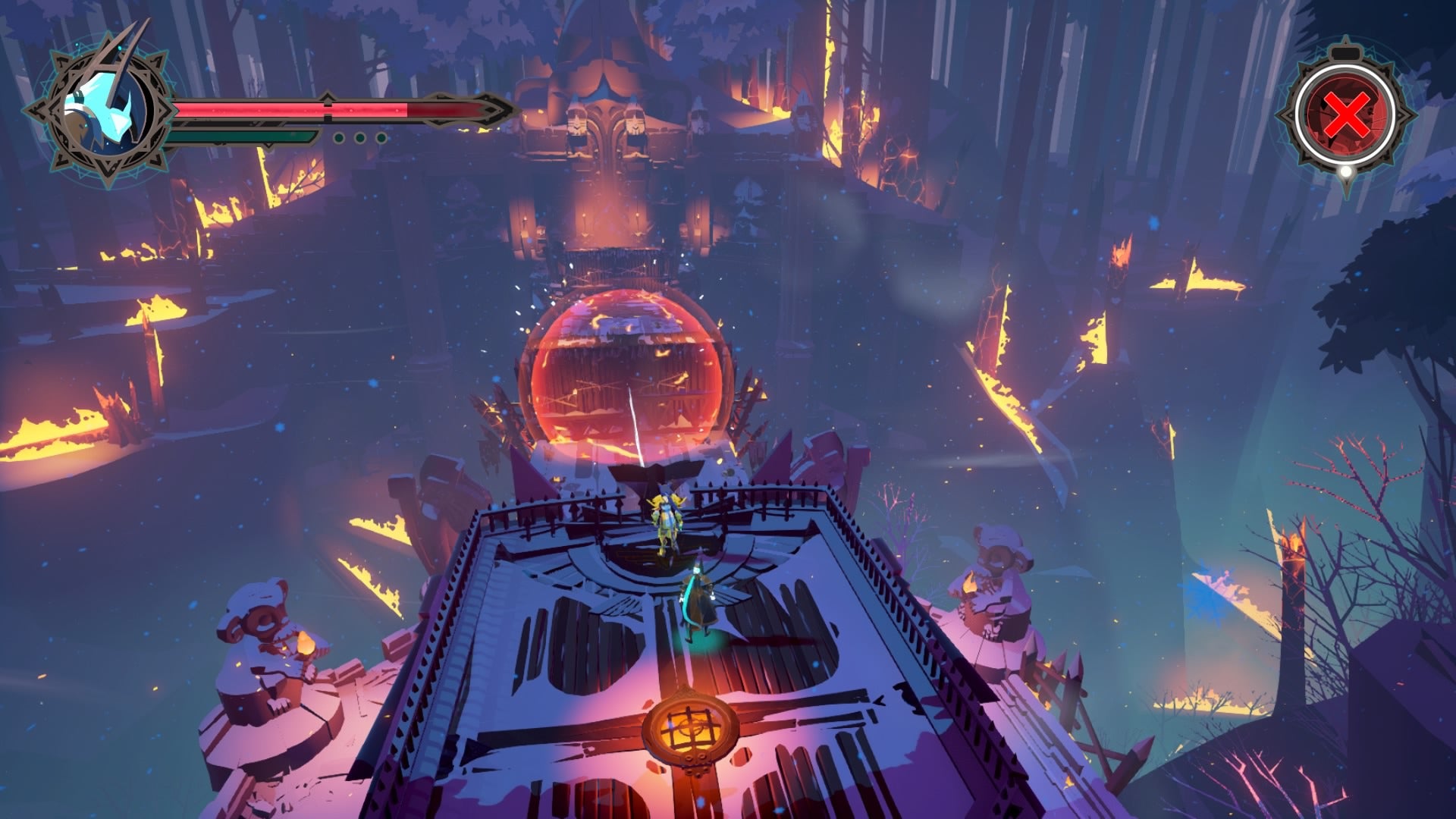 It's a shame, because the combat itself is well done. The skills the Harbinger gains reward smart play, and battles are challenging, though the camera doesn't always point in the direction you wish it would. The first time you dodge the void shark's rapid ground-pound attack, it feels really good.

Systematically identifying and tearing apart an ensemble cast of bad dudes in Omensight feels reminiscent of the Arkham games, and nuances like the return of Stories' hookshot attacks add a smart layer. The arenas and locales get same-y, but the combat works hard to make them fresh.

The various platforming sections don't have the same life, however. They mostly consist of hopping across platforms over instant-kill lava or bottomless pits. A frantic temple escape is the best use of the game's platforming mechanics, but it happens once in a single day's events. Otherwise I saw the same hallways, arches, cliffs and trees over and over.The levels are gorgeous, but it couldn't quite stem the repetition.

By game's end, you have most of your answers. Though my investigation board said I had missed a few minor truths, I knew the major beats of what had happened, and the compulsion to sleuth out more faded. The ending falls a little flat, with some questions still hanging in the air, and by the time the final boss fell and the epilogue played out, it felt a little bittersweet.

Omensight has a good few moments where concept and format combine to create something clever and unique. You just have to go through many repetitions of the same ol', same ol' to uncover them.