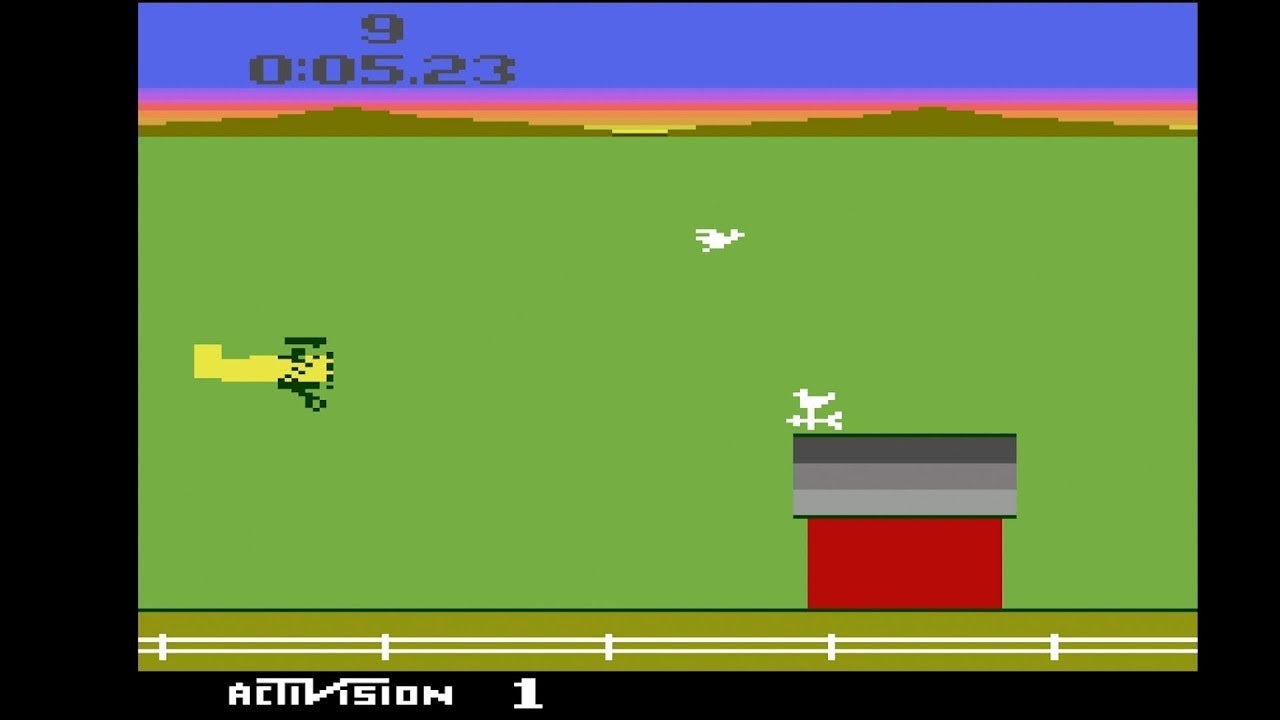 A speedrunner using a glitch never performed on consoles has set a new record time in the Atari 2600 game Barnstorming. The glitch creates a new speedrun category for the game, whose scores were once held by the controversial video game player Todd Rogers.

The 1982 game Barnstorming has various mode to play. The goal of Barnstorming‘s “Hedge Hopper” mode (also known as Game 1) is to see how quickly you can fly a propeller plane through 10 barns. The barns are located close to the ground and the player must swing down under their roofs without crashing into the barn.

The current world record time is a 32s 720ms time by Clay Karczewski. A speedrunner named ersatz_cats has beaten this time thanks to a glitch thought to be limited to tool-assisted gameplay, clocking in at 29.97, outlining the history of the run in a detailed Reddit post.

In the 1980s, the top score was held by someone else: Todd Rogers. Rogers is an infamous high score setter who made a name for himself in the 1980s. Last year, his record in the Atari 2600 game Dragster – considered the longest held video game world record – came under scrutiny after a speedrunner used emulation tools to show that the score was not possible under normal conditions.

All of Rogers’ video game scores were later removed from the leaderboard of Twin Galaxies, a top record-keeping group, after an arbitration process concluded his Dragster time was impossible. The Guinness Book of World Records voided Rogers’ world record for longest-standing video game record.

In the spring 1983 edition of Activision’s newsletter, which was called Activisions, Rogers is credited with a “Hedge Hopper” time of 32.74 seconds. Even today, this score would be considered exceptional, but rumours of a lower time of 32.04 also exist on message boards.

That score was supposedly submitted to Twin Galaxies and logged as the best time but later removed. For some, it has become known as the the “coffee stain” score because of stories that the submitted time had been misread due to a coffee stain on documentation.

“I’ve only heard about the supposed stain,” Rogers told Kotaku via Facebook Messenger. “When I submitted any of my scores, they were good and clear.”

The time from the coffee stain run would surpass Karczewski’s and seemed impossible. However, it is possible to hit the roof of a barn in Barnstorming in a precise location such that the game counts it as though the player has successfully flown under the barn. The impact knocks the player back before the barn.

With the proper timing, they can crash into the barn over and over to get an incredibly low time. Using this trick, a tool-assisted speedrun achieved a time of 14.74. This was done on an emulator using special tools to go frame by frame through the speedrun. It was unclear if this trick could be executed on console. ersatz_cats’ speedrun is the first documented use of this technique on an actual console.

In their run, they hit the barn in that exact spot twice at the start of their run.

“I’ve been aware of the roof bang glitch since the beginning,” Rogers said. “If you bang or nick the very front of the barn with the top of your wing, you’ll be credited with passing through a barn. It’s a cheesy way of manipulating the way the game is played.”

Roger denies ever using the glitch. “When I played for Activision they watched my entire performance, just as in Dragster. There were no flaws in my game play. I performed without glitches. If I played any other way do you think they would have hired me on to showcase their products.”

Ersatz_cats’ run bests both Karczewski’s record and the supposed “coffee stain” score. The glitch completely changes how the game is played and has led to the creation of a “Glitched” category for Hedge Hopper on leaderboards.

“This discovery on Barnstorming should be taken for what it is: A cool new skip on an Atari classic,” ersatz_cats said on Reddit. “Not only did we break new ground on a very old game, not only did we beat [Todd Rogers’ time,] but we beat the original coffee stain, 26 years later.”