Shadow Of War’s New Expansion Should Be Its Own Game

When the video game Shadow of Mordor was released in late 2014, its most marvellous trait was its Nemesis System. This superb chunk of design and programming ensured that any evil grunt that killed the player would be elevated in the game’s bad guy hierarchy and would stalk the revived player, perhaps becoming the game’s ultimate enemy in the process.

Shadow of Mordor‘s 2017 sequel, Shadow of War, expanded the Nemesis System and choked on it. The sequel’s final expansion ditches it, changes a lot of the franchise’s other systems and is better for it.

There can be no Nemesis System in Desolation of Mordor, this $US20 ($26) expansion to last fall’s Shadow of War, because there is no coming back from the dead when an enemy kills you. Not really. You play Desolation as Baranor, a mere man who, in the lore of this interactive J.R.R. Tolkien spin-of game, doesn’t have the power to come back from the dead. If an enemy downs you, you get a last-chance opportunity to make a well-timed button press and survive. But if you fail or have run out of chances, you’re dead and you must start Desolation over with most of your progress lost. 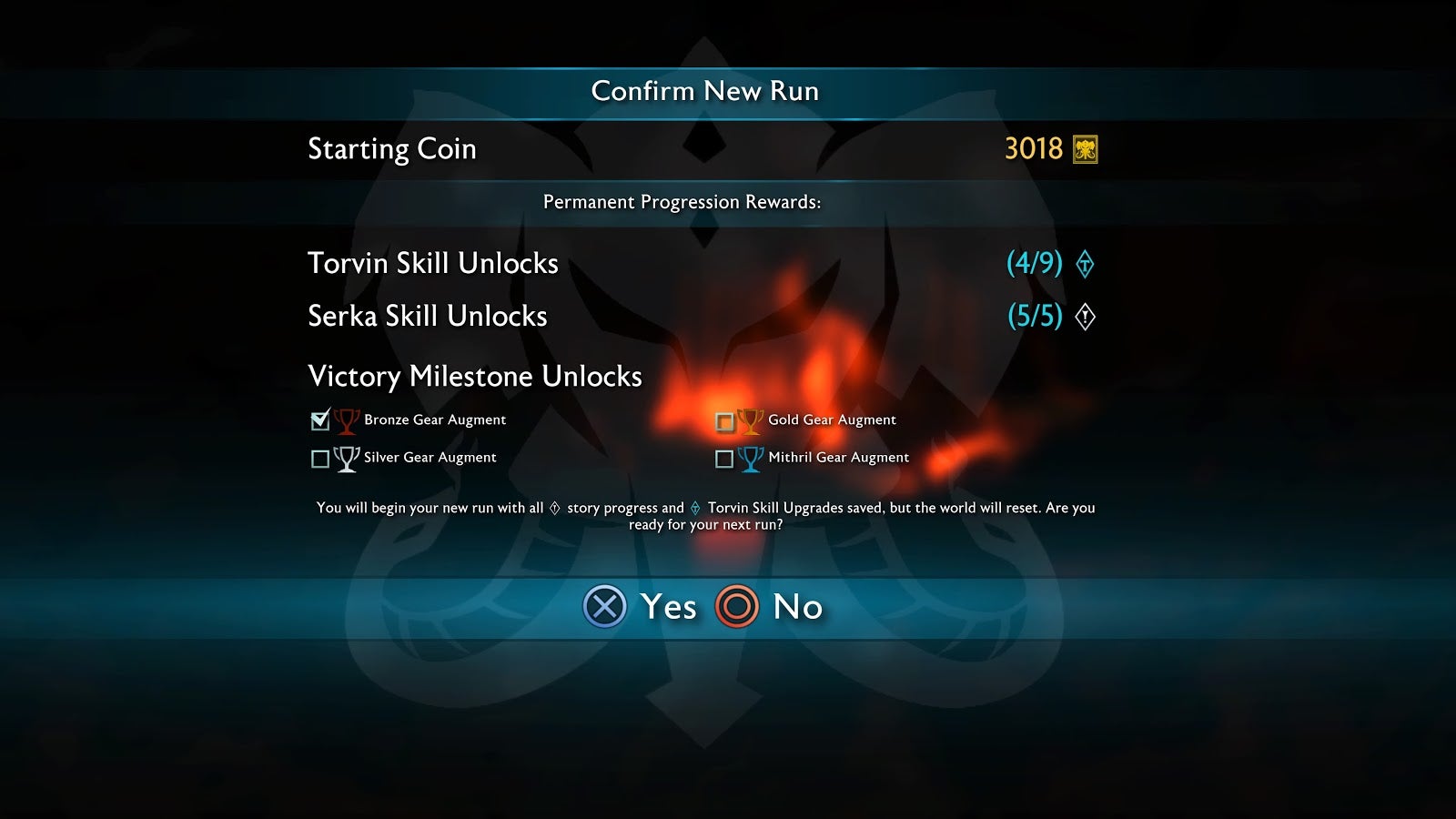 My score after my first run through Desolation of Mordor. It took me a little over two hours and is designed for repeated play as you start building your abilities again under the threat of permadeath. It’s a roguelike.

Desolation is the Shadow team’s mostly successful attempt at turning their game into a roguelike. It is designed for players to power up, power through it, win a big siege battle, get a score for their speediness and then start again, bringing just some of their progress with them. Story missions are mandatory just once, and progress in those five missions sticks even after death. So too do certain key gear upgrades that you find using sketches that indicate where in the expansion’s new desert zone they’re hidden.

The other things you can do – conquering outposts, hiring mercenaries, amassing a well-tuned fighting force, unlocking branches on a new skill tree and gathering loot that empowers your character in distinctly interesting ways – are lost once you’ve died.

I’ve played through Desolation once. In the process I saw the full story of Baranor obtain a grappling hook and glider, reunite with his lost brother, ambush an orc convoy, and prepare to lay siege to a massive fortress. I also found several permanent upgrades, such as the ability to shoot fire arrows or use the new grappling hook to launch Baranor skyward into a glide, a la Batman in Arkham Knight. I won’t lose any of that next time I play. 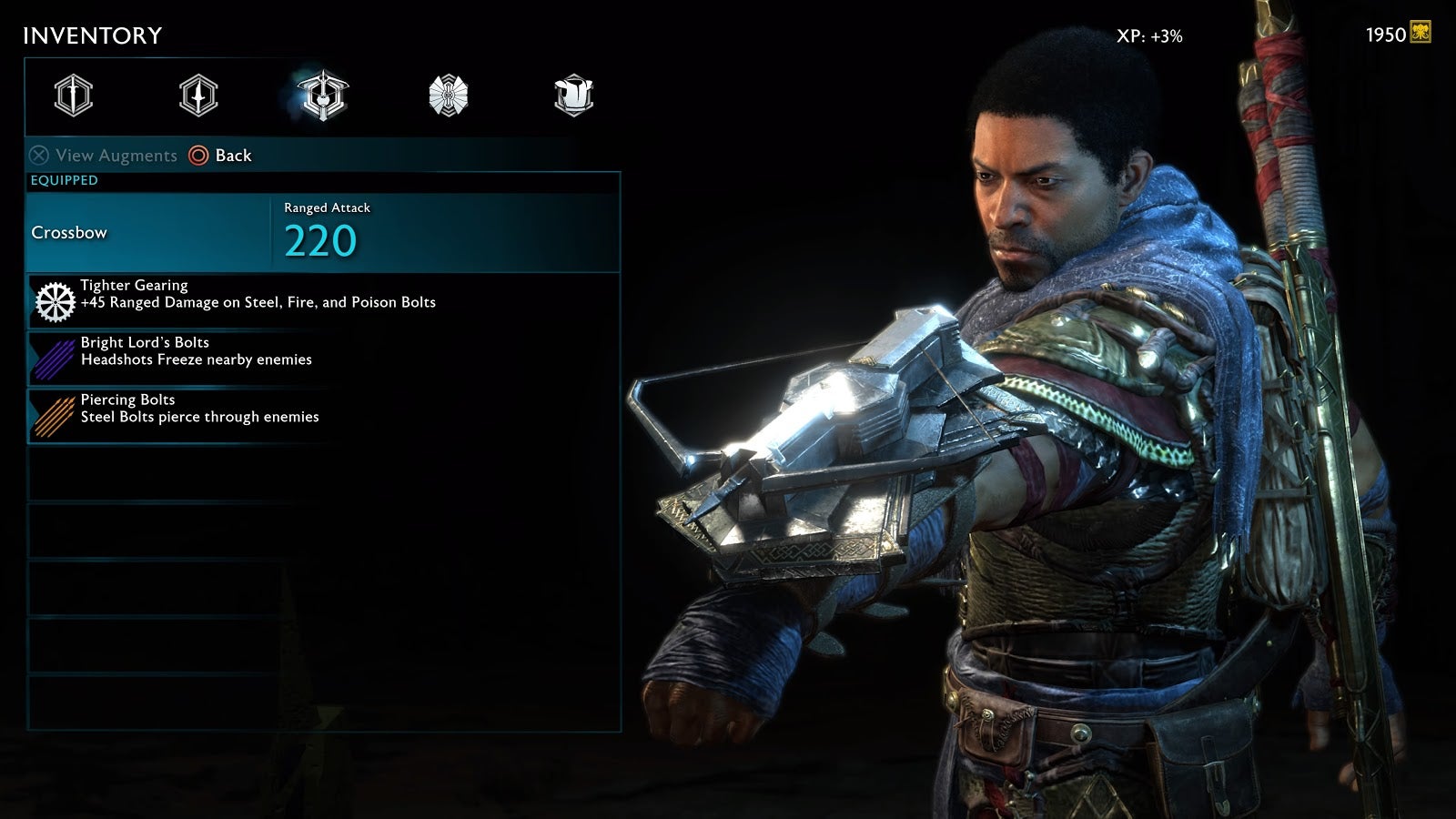 Baranor’s crossbow with a few perks added that I picked up from defeated orcs. The perks you pick up can nudge you into playing with a different strategy.

What I will lose in my next playthrough are the perks I picked up while slicing through orcs and many of the skills I gained. My first Baranor was able to poison enemies when hitting them with a critical strike. He also was immune to poison and could free any enemy hit with an arrow in the head. I’d amassed several armour and offensive buffs, most offered via loot dropped by defeated enemies and all colour-coded to denote rarity and excellence of advantage.

I’d unlocked some skills that made enemies drop more loot and some that affected a new ability to summon a swarm of allied fighters. All will be gone next time.

In my first run, I made it through the brief campaign and the final siege without losing my abilities, though twice I nearly died. Twice, I recognised the need to play with greater caution. I didn’t want to lose what I’d gained. 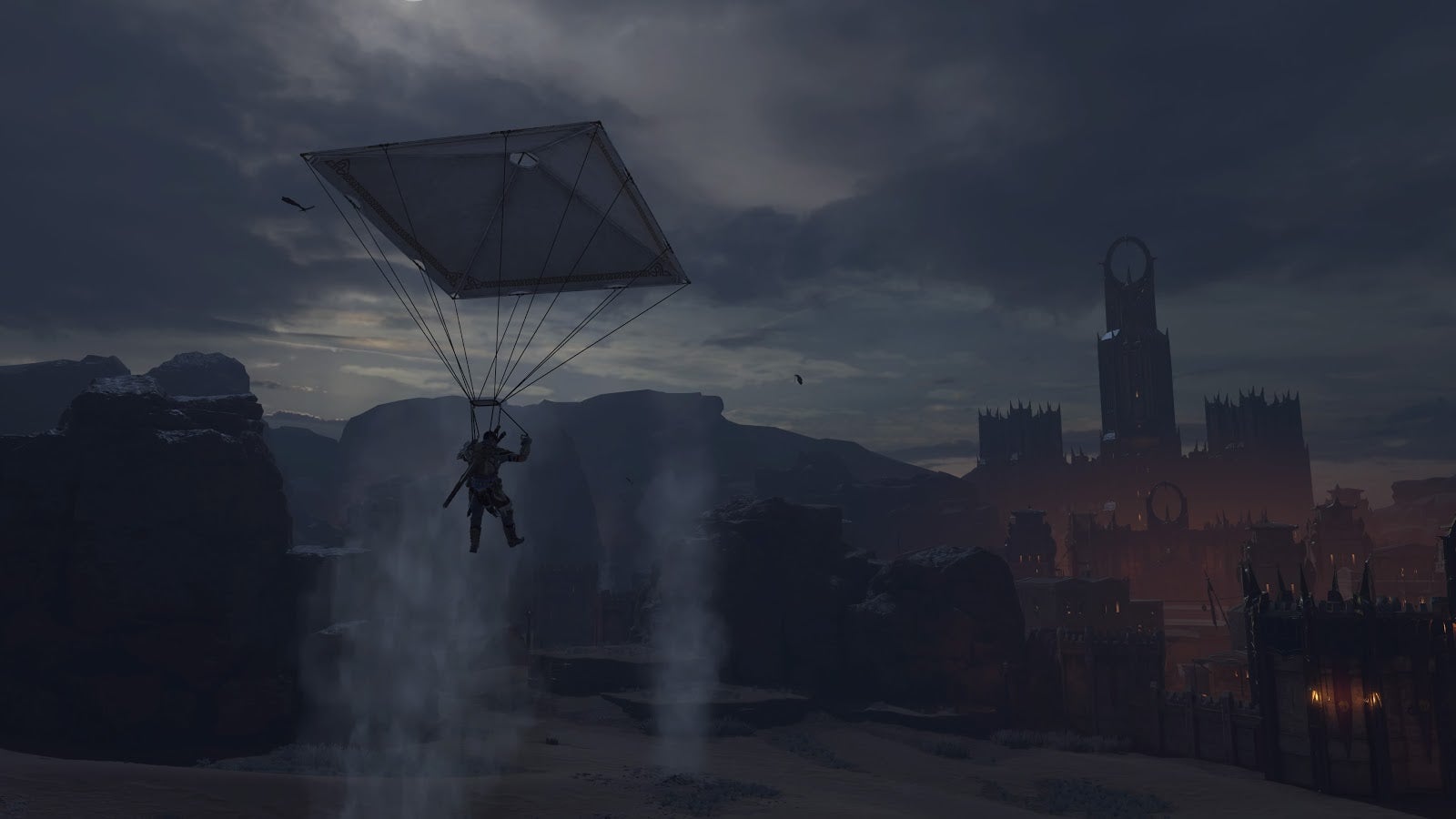 The game’s grappling hook and glider make getting around in this Shadow game a whole lot easier. Striking enemies from above doesn’t get old.

Shadow of Mordor was a fine game, but Shadow of War sagged from an overabundance of options and systems, some of which notoriously seemed designed to waste people’s time and drive them toward microtransactions while others just got in each other’s way.

Shadow of War‘s protagonist, Talion, was armed with an absurdly diverse moveset full of special stealth attacks, freeze moves, combat combos, ultra attacks and so much more that conspired with the game’s thick crowds of enemies to tolerate, if not encourage, loose, sloppy, button-mashing play. Hammer on the buttons and cool stuff would happen. If you died, no big deal and, plus, who could even notice you developing a Nemesis, what with the game’s voluminous numbers of named enemy orcs.

Desolation‘s stiffer penalty for death resolves this. Baranor has a lot of moves, but his relative frailty forces more strategic, purposeful play.

Shadow of War also got lost in over-complications of the Nemesis System, resulting in tangled webs of hierarchies for both enemy and recruited/enslaved orcs. On paper, the ability to have networks of enemy and friendly orcs, to have many more variables to how the relationships among those orcs can change, was a positive. In practice, it was cumbersome.

Desolation offers the radical solution of removing the Nemesis System for enemy orcs by making death the end of the campaign. It sidesteps the complications of having a network of friendly orcs by instead establishing a pool of mercenaries that players can hire and then assign as bodyguards or as commanders of seized outposts.

Each merc can provide statistical upgrades to their fellow mercenaries, and each also has some special combat moves that can be triggered by the player. The bodyguard I took with me on my run could throw poison bombs at enemies. He also was just really good at killing enemy orc captains – and he should have been because I paid extra in-game gold for him. 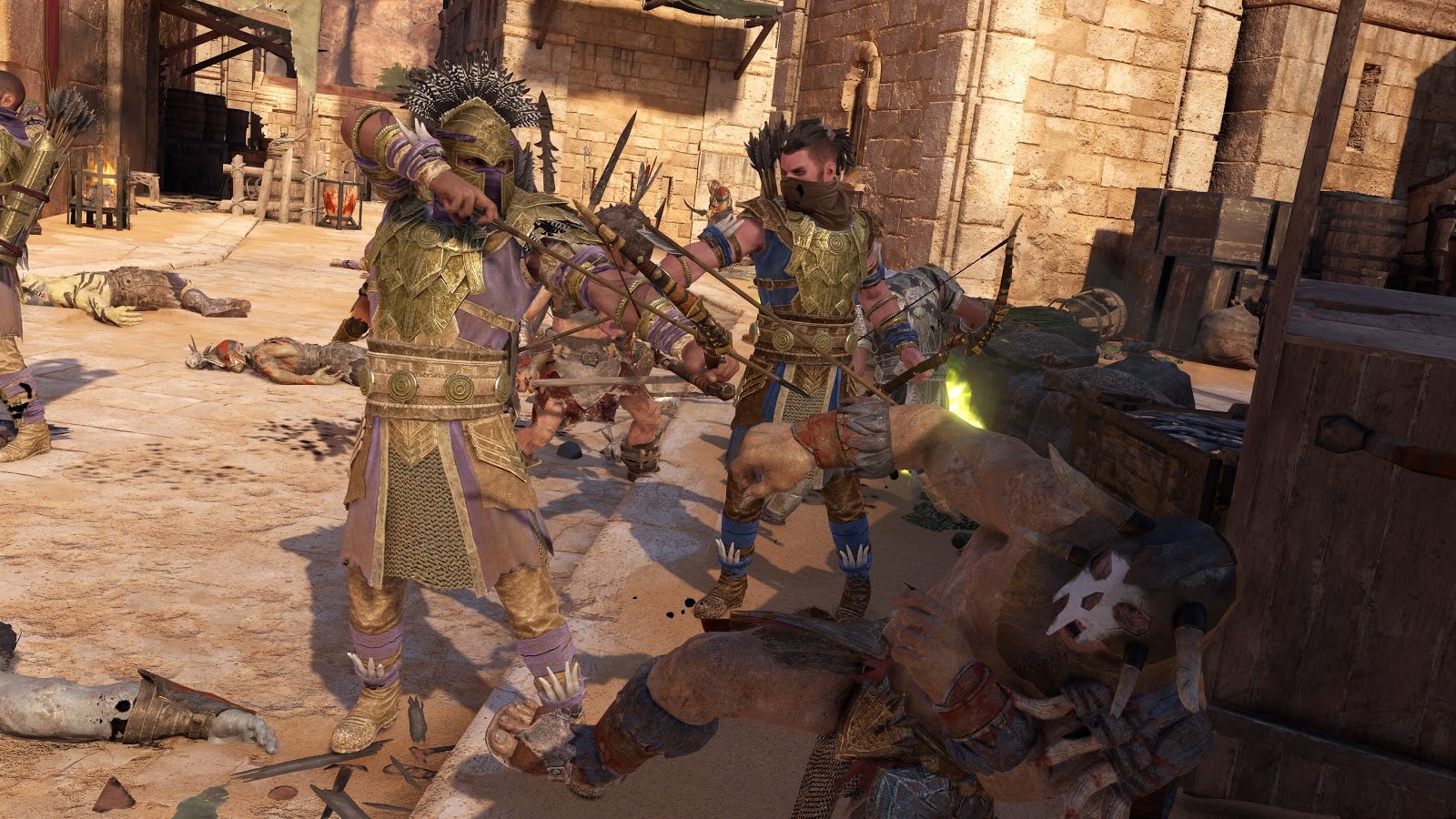 If you spend in-game money for the best of them, the allied mercs are very useful. You can invest in upgrading your crew at the expense of upgrading yourself, if you prefer that play style.

Shadow of War got lost in its maths, in its tumble of orc stats, loot chest rolls, to the point where it was hard to feel in control. Too often it felt like we were being played, or that the game was playing itself. Desolation, the second over-achieving expansion for the game, swings hard the other way. It demands the player take control and play with care and purpose. It offers the player choice and dangles the danger of consequence.

This expansion is the best thing about Shadow of War and would be best offered as a standalone experience, free of its main game’s baggage and available to those who want a compact, enticing challenge. It would be, perhaps, a better way to adventure through Tolkien’s world in the future.