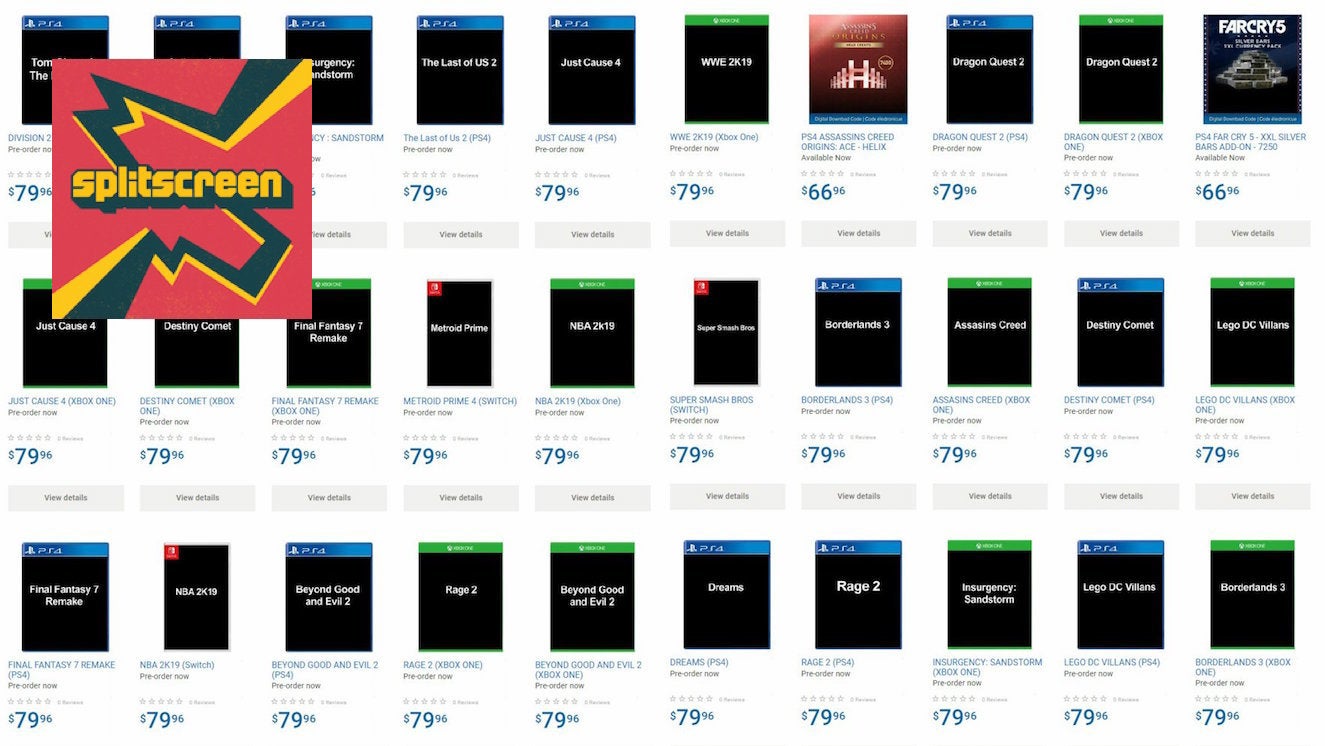 What're the pros and cons behind the video game industry's obsession with secrecy and surprises? Today on Kotaku Splitscreen, let's discuss.

A recent set of listings on Walmart Canada may have spoiled the surprise of some announcements, such as Rage 2. Screenshot: Wario 64

First, the Splitscreen Gang talks about Westworld, escape rooms, and news on Nintendo, Rage 2, and Trump's connections to Everquest (14:16). Then Polygon executive editor Chris Plante comes on to talk about video game leaks, how Polygon has evolved over the years, and whether it makes sense for game companies to be so secretive (32:03). Finally, Kirk and I talk Destiny 2 and the delightful Donkey Kong Country: Tropical Freeze (1:11:58).

Chris: I just don't get what there is to gain [from secrecy in the games industry]. And I'm sure people in marketing and PR hear that and they scoff, but I look at any other industry, whether books where a release can be planned years in advance, or film where everything is in the trades before it's even in production. And there's a good deal of transparency.

I think what happens when you're transparent is, it makes it boring - there's so much going on, well of course that thing's happening. And you can see just how much it fails to congeal.

When I did culture editing at Verge, these stories would pop up in the trades - oh, Bill and Ted 3 is going into production. I feel like I saw that story four times, and it just got trotted out again, maybe it's real this time. You get this realisation of, "Wow, even when it looks like a sure thing, nothing's a sure thing."

Jason: It sounds like you're making an argument in favour of keeping things secret.

Chris: No, no, I think the opposite. I think that's the problem. Because everybody comes to understand that, when there's transparency, you recognise the inherent difficulty of these things getting made. That often time things don't get finished. You get to see a little bit of how the industry works. Versus the current thing, which is: Everything's completely opaque.

Jason: And so nobody understands any of it.

Chris: Yeah, nobody understands any of it, and then when something gets announced and then it gets pushed, it's like, "Oh my God, what does this mean, it must be the end of the world."

Kirk: Do you think any of the thinking behind this is that if you maintain this culture of secrecy, and everything's opaque, then every little bit of information you roll out is more exciting to people? And you get headlines all the time, "Extremely obvious sequel number five is in production."

Jason: And minor details. Fallout will have 10 guns!

Chris: The minor details will still be there. Because the large difference we're talking about is, "Thing exists in the ether or it doesn't." That's the thickest layer of BS, is the idea that you simply cannot know that a thing is in development. There's also all the other things, right, like when you go to a developer they throw up black tarp on the art.

Kirk: "We're not talking about the rocket launcher yet."

Chris: Yeah. That's its own thing, and there's a little more nuance there, but the idea that projects are not public knowledge just seems so weird, and I don't really get what the benefit is long-term other than short burst of "Hey, Call of Duty Black Ops 4 exists." Great, I think people are gonna be OK.

Jason: I've been thinking about this recently a lot, because... Well at the very beginning of the games press, 15, 20 years ago, video game magazines existed to serve ads and previews that were basically ads that weren't labelled. Video game press really was a marketing extension for these companies.

In some ways that's evolved over the years, and I think Kotaku very much in its earliest forms, and then when I started, was pushing back against that idea. And I think we pushed so hard, that we were publishing any leaks that were sent our way, which we did a lot of...

I think what happened was that sites like Kotaku, and I think others as well, following the lead of early Kotaku before I started, pushed against that old-school magazine approach of being PR-friendly. I think more and more, at least I personally have tried to find more of a balance, and swing back a little the other way.

My mentality used to be more like, "If I know something I should share it with readers," and it's evolved over the years to the point where it doesn't feel like I should be sharing everything just for the sake of ruining a surprise, and I would rather share the things that matter and focus on stories that aren't just about what people are going to find out anyway. I've become a little less radical when it comes to this sort of transparency.

So like, before For Honor was announced, someone sent me a whole bunch of details on it. It was code-named Hero, it was Ubisoft's big IP, and I didn't know what to do about that. I talked to Stephen [Totilo] about it for a while, and eventually we decided to sit on it.

After the game was announced, mostly leak-free, some time after that I was talking to a developer on that game who was like to me, "Man, it was one of the best moments of my life just getting to see that reveal and knowing it hadn't been leaked out before, and knowing we got to surprise and delight everybody."

Chris: Yeah. That's also the larger system, right? That reveal is hinged on the surprise because of how it's structured. If it wasn't all about the surprises, it would hinge on people being excited because the game looks great. That's - The Avengers, Marvel came out and showed what they were working on for five, six years, and the excitement was about actually seeing the thing.

Jason: But there's something to be said about the excitement of an E3 press conference, and millions of people on stream, and knowing you're gonna surprise them.

Chris: I completely agree, I would just question that specific brand of surprise - the name, the existence... I think you can still have that surprise. But the industry, because of the early days of games press, when it was not really press, is all built around these mistakes.

I completely get why developers and publishers don't want to do that now, because I'm sure the logic would be, "Well if everybody knew everything we were making, they'd be asking about it constantly."

For much more, listen to the full podcast. As always, you can find Splitscreen on Apple Podcasts and Google Play. Leave us a review if you like what you hear!