Fortnite’s Getting A Monthly Subscription Service

Fans of single-player Splatoon should know that a whole lot more of it will be landing on Switch very soon in this winter’s “Octo Expansion”.

The $30 DLC will finally let you play as an Octoling, a species previously encountered in the games as enemies (or as a TV show host), in online multiplayer matches. But to do that, you’ll first have to play through the single-player content, which is split into 80 brief missions.

I got to try out a few of these recently, and they’re going to give players a solid challenge to tear into.

You'll begin the DLC by customising your Octoling, "Agent 8", who can be either a boy or a girl. You'll wake up in a "test facility", only instead of GlaDOS, you'll be put through your paces alongside familiar characters such as Cap'n Cuttlefish and a tiny helpful blob named C.Q. Cumber. (There will also be references to "Agent 3", who was the player character in the story mode of Splatoon for Wii U.)

You'll have to earn in-game credits by playing missions, which you can then spend to try more missions. It's arcade-game style: Put up your credits for one try; lose and you'll need to spend more to continue. But you can replay earlier missions to rack up more cash.

This sort of pay-for-play system can get kind of annoying if not done correctly, so hopefully Nintendo gets it right with this one. 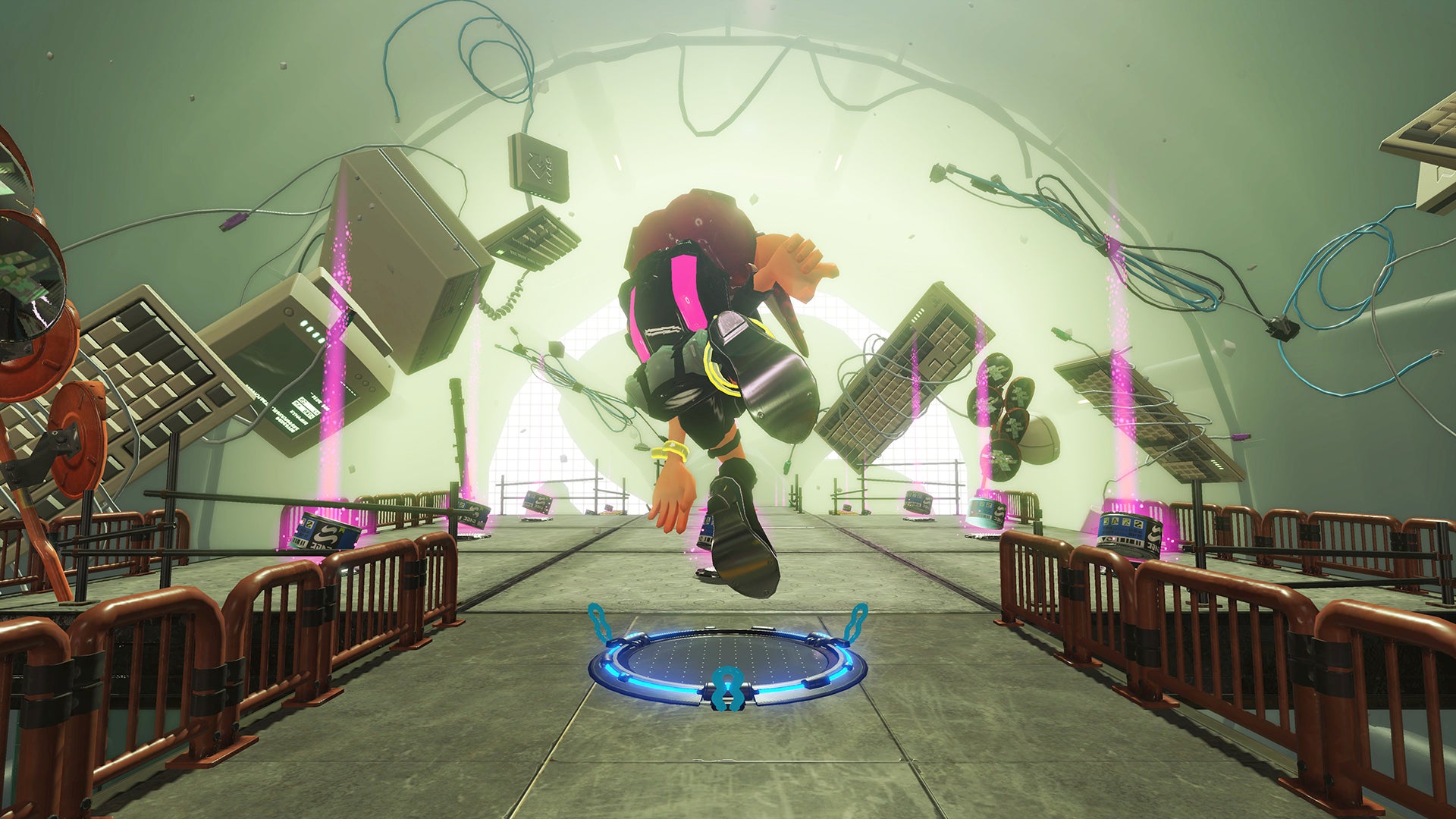 You don't have to play all 80 missions to finish the single-player mode and unlock the Octoling for multiplayer. But it's likely that you'll want to, as what I played was pretty fun. Here are the levels I tried:

Float from platform to platform on a hovering jetpack. The goal is just to get to the end of the level without dying or falling off the platforms, but you also have the option to try to fly through a bunch of rings. The jetpack uses ink, so it won't propel you upwards as far if you're hovering over thin air (or a grate, for that matter).

Fight a series of enemies on a platform made of destructible crates. This was a real challenge, since you're only armed with a short-range gun and explosive bombs with which you have to eliminate a few small waves of airborne enemies, and everybody's shots destroy the platforms you're standing on.

I kept getting to the final enemy, who lobbed massive bombs right at my feet that blew a massive chunk out of the level and insta-killed me every time. You have to have some good evasive manoeuvres and planning skills to beat this.

Push a massive 8-ball down a series of ramps. This doesn't sound so bad, but you have to do it while avoiding enemies that are trying to shoot the 8-ball off course, and also while not screwing up and hitting it the wrong way sending it plummeting into the abyss yourself. 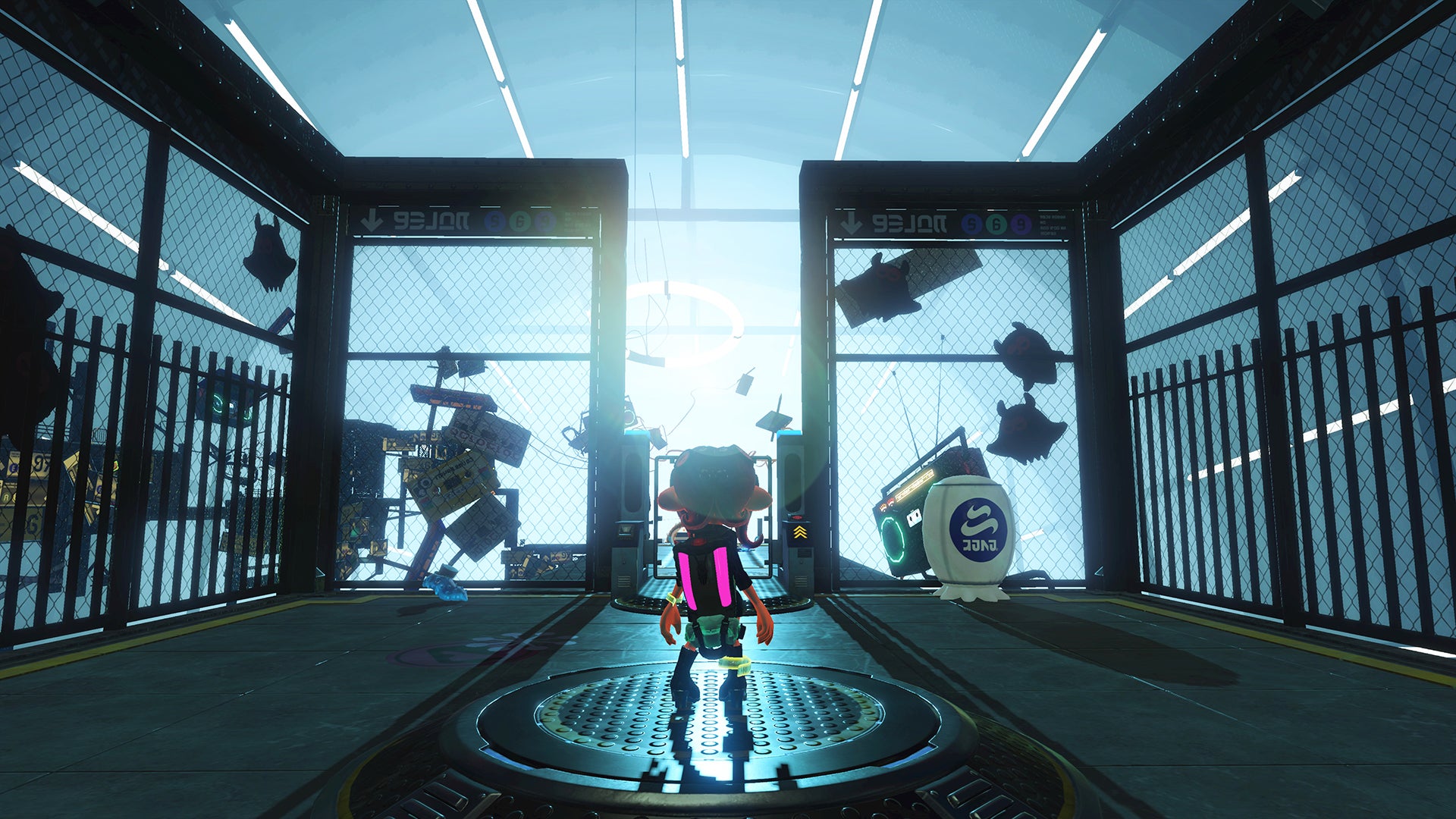 Armed with a sniper rifle on a tiny little platform, fire at targets to spin the platform around and circle a group of enemies, picking off 20 of them before a brief timer runs out. And I do mean brief.

Roll in a hamster ball to the goal. This ode to Super Monkey Ball was a riot. You can fill the ball with ink and cause it to create a small explosion around itself, which you have to do here to take out enemies and obstacles before you can proceed. You need to make it to some fairly tightly-timed checkpoints or fail.

Ride on a series of rails to take out a series of boxes that are also riding said rails, without crashing into any boxes. I didn't even get close on this one, which requires a lot of fast thinking and excellent aim to hit rapidly-moving targets.

As you can see, the activities you'll be undertaking in Octo Expansion are fairly diverse. Nintendo limited this preview to these six levels, and the representative hid the Switch from me as she jumped between the levels. So I didn't get much of a look at how these levels are stitched together, how many you can select from at any one time, or anything else about the larger game that these levels comprise.

So far, I can certainly say that the individual levels were fun, inventive and challenging.