When The Legion Of Superheroes Got Freakin’ Weird There hasn’t been a Legion of Super-Heroes comic in a very long time. At one point, the massively popular 31st Century super-team seemed like it’d be around forever. But, in 1989, the Five Years Later run radically re-invented the team in a way that fans hated.

First created in the 1950s by writer Otto Binder and artist Al Plastino, the Legion of Super-Heroes were characters essentially created so Superboy could have superpowered friends. The team grew to become something like a university for superpowered teenagers from all over the galaxy, working out of big splashy headquarters under the auspices of the United Planets and trusted by 31st Century Science Police.

Many of the members hailed from different planets where everyone had superpowers. Rokk Krinn/Cosmic Boy came from Braal, where everyone had magnetic abilities, while Salu Digby/Shrinking Violet hailed from the planet Imsk, where natives could shrink down in size. Nicknamed Vi, she was the cute, girl-next-door type in the Legion roster. Vi was the sweet little sister of the team, better suited to stealth than punch-ups.

Other members got their powers via accidents and experiments, but they all represented a plurality of sentient life throughout the cosmos. 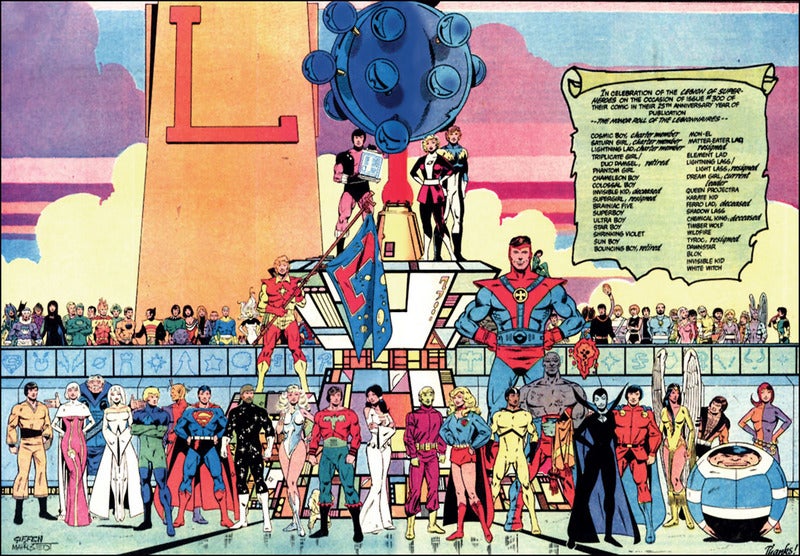 Part of the appeal of the Legion was how it stood in for the idea that young people from different cultures could make their era better by cooperating. Internal conflicts in LoSH stories generally revolved around familiar melodramatic plot points: romantic entanglements, culture clashes, cliques between new and old members and insecurity over self-worth.

For years, the Legion of Super-Heroes stood as a symbol of a bright, shining future. As the real world changed, the futurism in LoSH comics became sleeker, even as it stayed brightly lit and sanguine. Political intrigues, brutal battles, and crippling family secrets all challenged the team but the core optimism never wavered.

That all changed in 1989 when a new Legion of Super-Heroes series began, drawn by longtime Legion creator Keith Giffen, who wrote it with newcomers Tom and Mary Bierbaum. Giffen and the Bierbaums start off the run in elliptical fashion, checking in on various members of the Legion half a decade after the climactic battle of the previous run.

The first issue opened up with a single page that said “Five Years Later,” followed by snippets of a documentary looking back at the glory days of the Legion. The rest of the issue doles out glimpses of where Dirk Morgna/Sun Boy, Reep Daggle/Chameleon Boy, and Rokk Krinn are in their lives, showing that those glory days are long gone.

As the story hops from planet to planet, we see how those worlds and heroes have stumbled into hard times or ill-fitting roles. 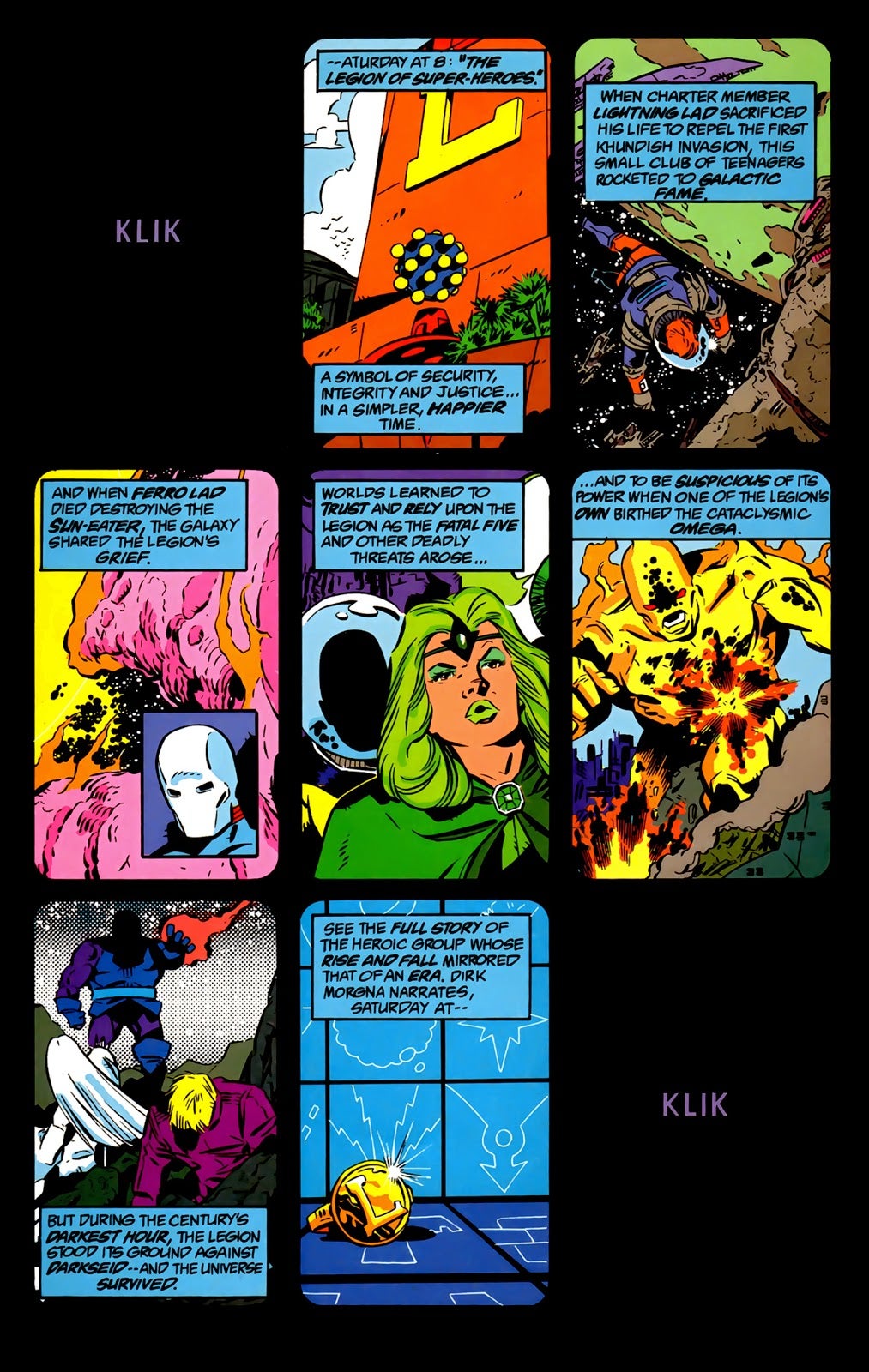 Context is crucial for understanding the experimentalism of the Five Years Later Legion. Three years prior, DC Comics had rebooted its entire fictional universe with new talent and new approaches to their characters. One of those changes — put forth in John Byrne’s seminal Man of Steel miniseries — meant that Clark Kent had never been Superboy.

The earliest Legion stories established that the teenagers 1000 years in the future had been inspired by a young Kal-El’s adventures, which were wiped from the newly reconfigured timeline. One storyline offered up a makeshift solution, which was that arch-villain Time Trapper had created a pocket universe where a Superboy still existed. But that was a Band-Aid on a phantom limb that only highlighted the continuity headache and tonal dissonance between the new Superman books and the ongoing Legion title. 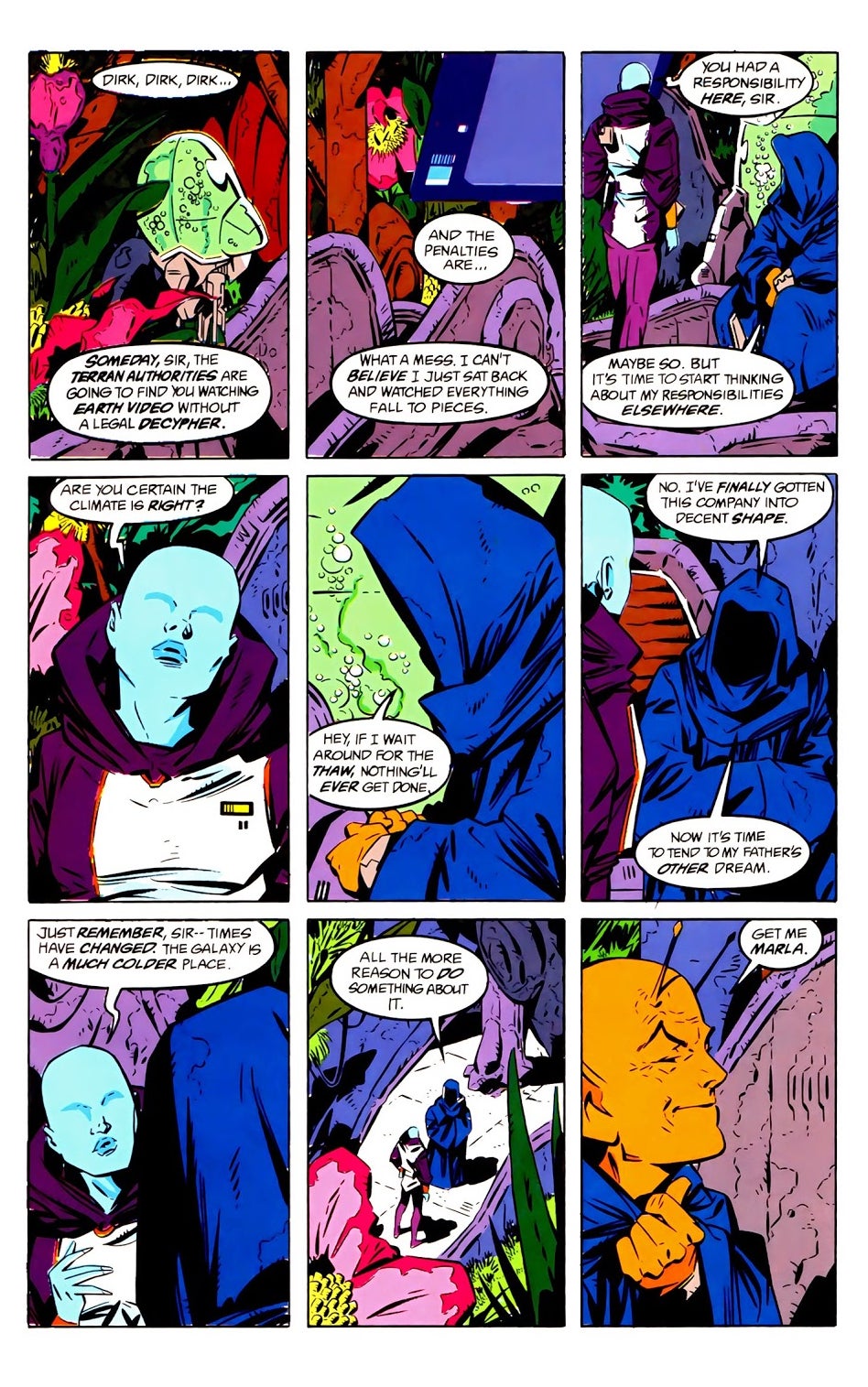 Looking back at these comics, it seems clear that Giffen and the Bierbaums made the decision to lean into the disarray. This shift in tone and status quo came three years after The Dark Knight Returns and Watchmen caused a sea change on the mainstream comics landscape. But the Five Years Later run didn’t veer quite as far afield as either of those projects. Yes, there was more raunch, innuendo and skin on display than in older Legion comics, but it doesn’t feel like the creative team was going for the idea of “mature” superheroes.

Instead, the goal seemed to be a desire to channel the feeling of being in a transitional stage of life. The Legionnaires were perpetually portrayed as teenagers in previous volumes. Readers had seen other glimpses of the Legionnaires as adults before, but they were essentially older versions of the same well-adjusted characters. There wasn’t the sense of complete and total dissolution as in Five Years Later.

The Five Years Later series started from the premise that the Legion members were something akin to teen celebrities and that their lives had the same ups and downs. Some of them found fame and fortune — Sun Boy mentions a paternity suit in one issue — while others wound up in brothels where the entire planet was a red-light district.

Chameleon Boy is the rich kid who grew up to run his dad’s business and Ultra Boy becomes a shady smuggler who is joined by Kono, a young woman with phasing powers. Various text pieces in the early issues buttressed this take, with gossipy, unauthorised reports of drama from the former heroes’ lives. It’s fair to say that the beginning of the run is a mess on purpose. The main through line is Chameleon Boy scratching his “get the band back together” itch, which sends him all over the galaxy.

As the run went on, continuity timelines were rebooted not once but twice. 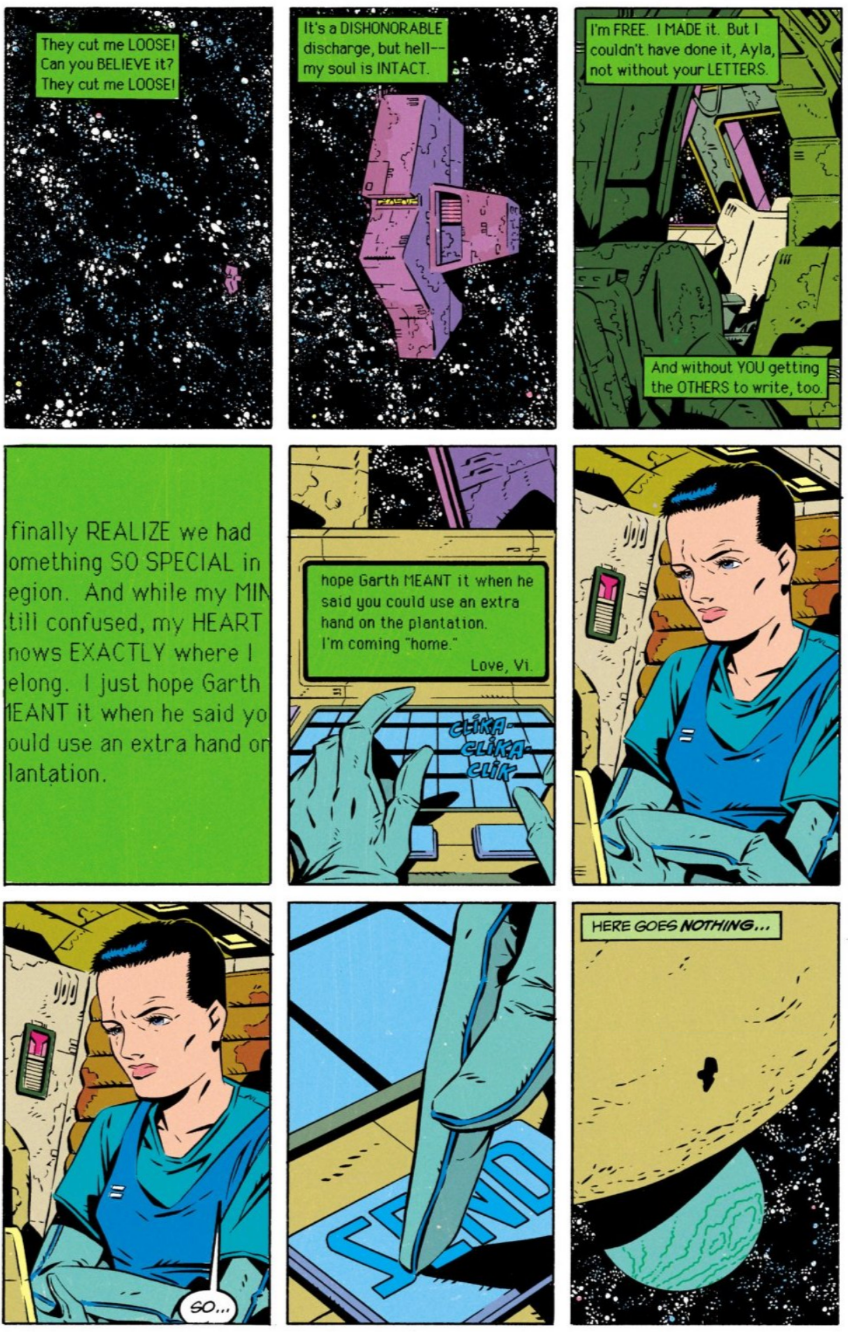 The reunions with cast members got more unpredictable, too. When we catch up with Shrinking Violet at the start of the Five Years Later run, she’s getting dishonorably discharged from the military. Then she goes to live with Lightning Lass/Ayla Ranzz, in a relationship clearly coded as a same-sex romance. Furball, the big humanoid creature that couldn’t speak, was revealed to be feral brawler Timber Wolf.

A male character took a gender-change pill — Sean Erin becoming Shvaughn Erin — to be in a relationship with Element Lad, who ironically was long interpreted as gay in the Legion fandoms. This kind of detailed insight was was a huge change from previous iterations of romance storylines, which primarily happened in a chaste, high-school-TV-drama mode. 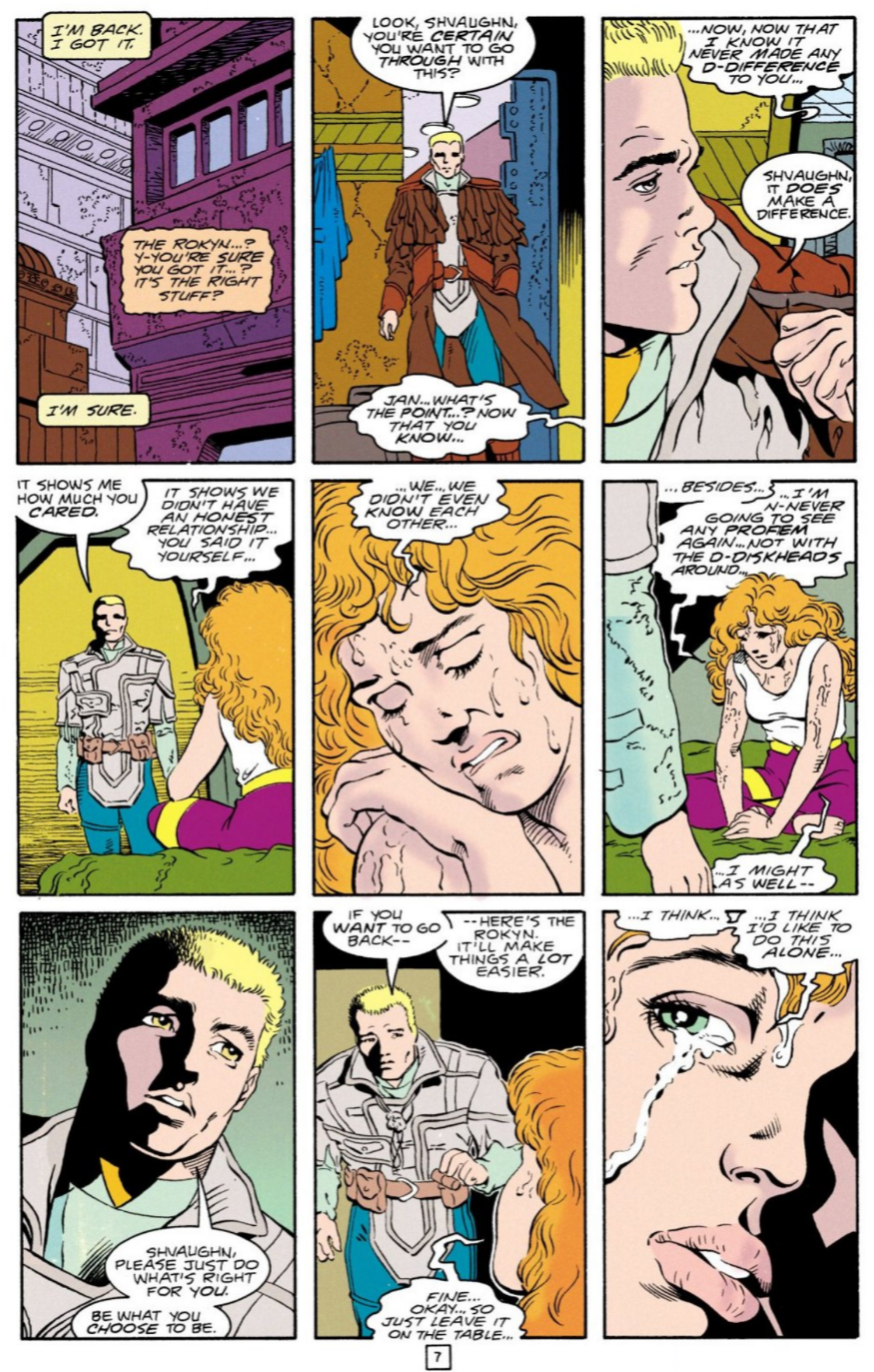 Perhaps the biggest change was in aesthetics. Giffen had drawn the Legion for many years before this volume, to the point where some considered him the definitive artist for the team. But Five Years Later did away with their superhero looks in favour of more fashion-centric design. Giffen’s draftsmanship was looser and moodier, creating a mercurial energy that jumped across nine-panel grid pages in squirrelly fashion.

The team hasn’t really been in the spotlight since the cancellation of a title launched during 2011’s New 52 editorial reset. Some of the clunkiness of the Five Years Later Legion is hard to look back at — especially the way it touches on gender — but it’s still a fascinating document of how a franchise stretched and strained to find an audience in a time of great change.