Batman Is Having Some Best Man Problems

The DC Comics Wedding of the Century - between Batman and Catwoman - has been through some hiccups, such as the temptation of Wonder Woman and Booster Gold screwing up the timeline. But now Batman faces another roadblock on the path to blissful matrimony: A few too many people want to be his best man.

Batman's sheepish about who'll be his best man in the pages of Batman: Prelude to the Wedding - Nightwing vs. Hush. Image: Travis Moore, Tamra Bonvillain and Dave Sharpe (DC Comics)

Selina and Bruce's wedding is just a month away, which means we're entering a busy time of planning for the happy couple. Dresses have to be acquired, bridesmaids and groomsmen have to be picked.

And Batman has to make a choice: Who's going to be his best man? This week, three candidates made themselves known, some better choices than... well, others. We'll get to them later.

For now, two very good choices appear in Batman: Prelude to the Wedding: Nightwing vs Hush - by Tim Seeley, Travis Moore, Otto Schmidt, Tamra Bonvillain and Dave Sharpe - in the form of Superman and Nightwing.

Clark, obviously, is not just a crucial ally in the world of heroes, but one of Bruce's dearest and closest friends. Dick, meanwhile, was the first Robin, Bruce's ward and practically his surrogate son.

That's a tough decision for anyone to make, let alone the world's greatest detective! 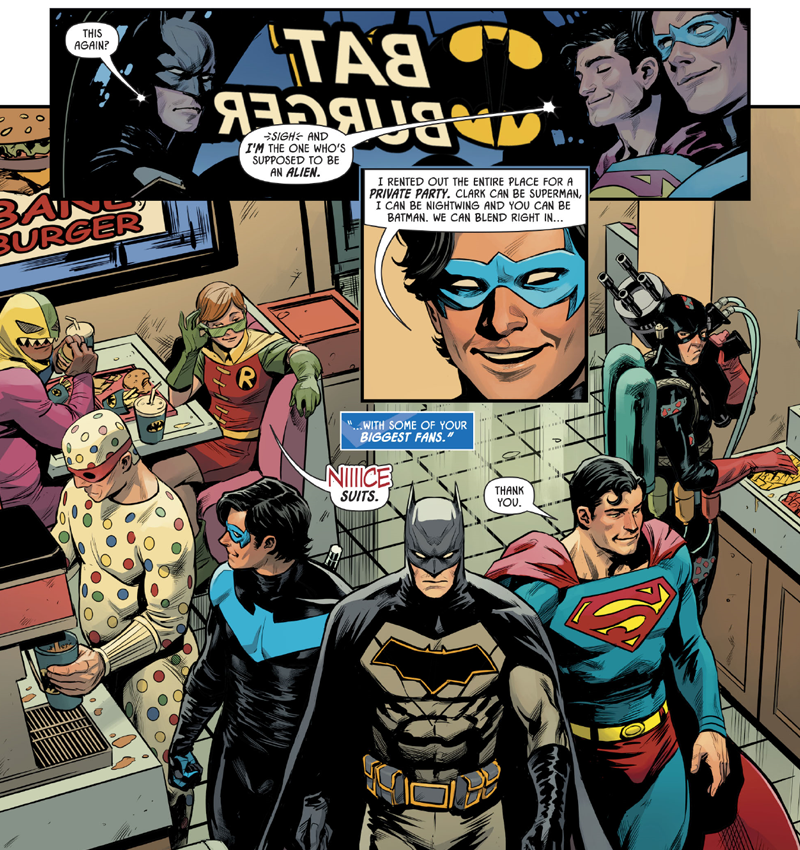 The look on Batman's face says it all, I think. Image: Travis Moore, Tamra Bonvillain and Dave Sharpe (DC Comics)

In Prelude to the Wedding, both Clark and Dick offer parallel boys' nights out in an attempt to convince Bruce that they're the best choice for best man.

Clark dances around the fact no one can really know it's Bruce Wayne and Selina Kyle that are getting hitched by acting out a plan that honestly seems like hell for Bruce: A private, superhero-costume-themed party (so they can all wear their superhero get-ups as disguises in plain sight) held at Gotham's Batman-inspired burger joint, BatBurger, where, yes, Bruce can continue to do that hellish thing he does of eating burgers with a knife and fork like a mad man.

Bold move from Mr Kent to actively antagonise his best friend, but it's some playful ribbing at least.

Dick, meanwhile, has something far sweeter planned: A getaway to a pocket dimension so small that no crime could exist to distract them, because it's pretty much just a big lake they can fish in and chat a few hours away. Awww. 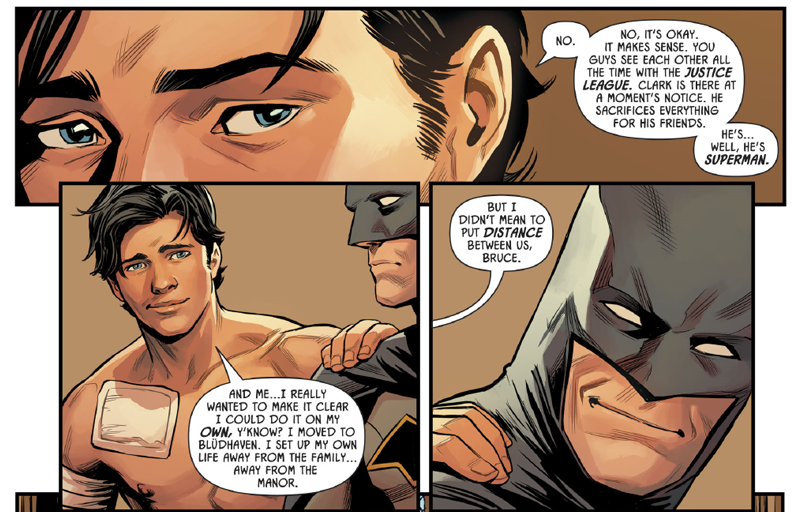 Sadly, the boys get interrupted by the arrival of a jealous Hush, miffed about his lack of an invitation to his onetime childhood friend/obsession's wedding, so there's no actual fishing trip to a parallel world. When it all winds down, Dick manages to corner Bruce about why they have let their relationship grow distant, assuming already that Bruce has chosen Clark for his best man.

But the truth is, he's struggled to make any choice at all, other than to spend more time with his former ward after the whole "getting married" deal is over.

That isn't the last matrimonial dilemma Bruce faces this week, though, because as it turns out, Batman #48 adds another player in the best man stakes - and this one's a lot less cute. Because the Joker knows Batman is getting hitched, and who better to be his best man than, well... his worst foe?

Batman #48 (by Tom King, Mikel Janin, June Chung and Clayton Cowles) is pretty much payoff for the recent DC Nation tease that Joker has found himself an invite to the wedding of a lifetime - but it's a setup caked in the usual violence and unpredictability the Joker brings to the table.

A mass murder at a local chapel draws Batman out to confront his old foe, only for Bruce to be faced with a question he likely didn't expect: Is the clown prince of crime his best man?

After all, in the Joker's eyes, their relationship has endured so much - even death. You can't have the Batman without the Joker, and they're so intimately understanding of each other in their endless battle between chaos and order. Can even someone like Superman or Nightwing match that familiarity, as dark as it is?

The Joker detonates a bomb that knocks Batman unconscious literally seconds after asking him, but I'm going to hazard a wild guess that, even if Batman is still unsure about who really will be his best man, his answer's gonna be a hard no. 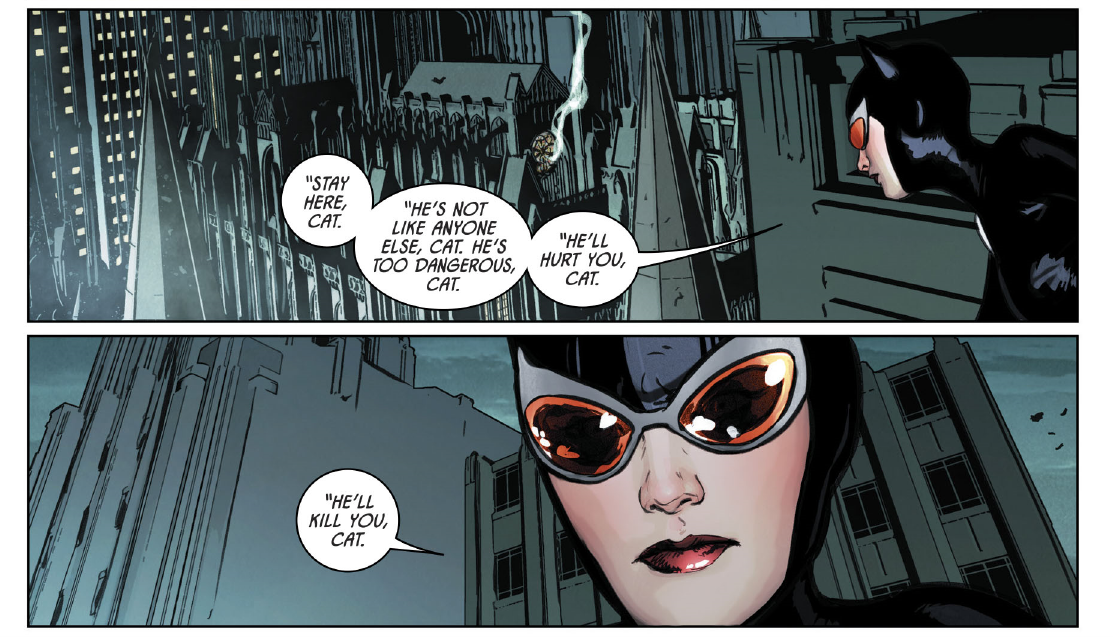 That is, if he survives long enough to make it down the aisle at all.