Like most things with The Legend of Zelda: Breath of the Wild, the game’s Champions’ Ballad expansion did not immediately thrill me. It took some time. It wasn’t what I wanted, but it’s now what I need.

The Champions’ Ballad has been available for Breath of the Wild since December, nine months after the main game’s release. While some people, myself included, had expected a self-contained side adventure and perhaps even an epilogue to the main game, it instead showed up as a series of new quests sprinkled throughout the game’s vast map, all set before Breath of the Wild‘s conclusion.

All I had wanted from the expansion was more Zelda. The opening of Champions’ Ballad signalled that Nintendo prioritised providing tougher Zelda, possibly back-breaking Zelda.

They’d done this with the winter 2017 update to the game that added a tougher difficulty level and challenge rooms. The December expansion then began by saddling our playable hero Link with a new weapon that made him vulnerable to one-hit kills. A spike-filled shrine in the expansion’s opening area signalled that Nintendo was prioritising challenge over all else.

I played a little past that. After regaining Link’s standard set of weapons and armour, I played a little further on, fighting a tougher version of the game’s Molduga sand worm, knocking through a repackaged boss battle and then putting the game down. There was challenge, sure, but I wasn’t finding much charm. 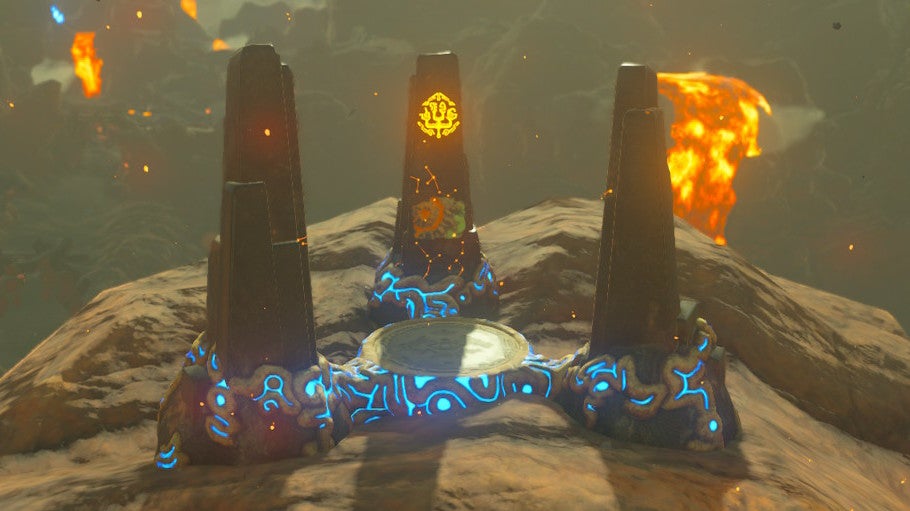 Stone pillars are adorned with illustrations that show the location for new challenges. It’s not hard to figure out where the one visible in this screenshot is, but being given new reason to go there is a nice incentive for a lapsed Breath of the Wild player.

Nintendo’s been ahead of me on Breath of the Wild. I went into the main game with a hearty appetite for the directed, puzzle-filled experiences of recent Zelda games. The lack of hand-holding and signposting in Breath of the Wild threw me off.

Suddenly I had to find the puzzles, the people and the fun mostly on my own, something I hadn’t had to do since I was a child playing through the first Zelda on my Nintendo Entertainment System. I kept worrying I was going in the wrong direction in Breath of the Wild, kept going on what in retrospect were unfortunate turns and bad runs.

Eventually, it clicked. Eventually I learned how many wonderful experiences were hiding in plain sight. Eventually I racked up more than 100 hours in the game, exploring as much of it as I could.

The Champions’ Ballad initially disappointed me because it wasn’t the added chapter to the game that I wanted, but also because I didn’t yet need what it is best at providing: A tour back through Breath of the Wild‘s amazing world.

Returning to the expansion last Friday, I was struck with how hazy my memory of Breath of the Wild‘s world had become. I’d loved discovering hidden caves in the northwest, exploring the far side of the volcano in the game’s northeast, and meandering through the game’s southern swamps, but I couldn’t immediately recall where any of my favourite locations were.

Here was the Champions’ Ballad to help me and, even better, to highlight amazing areas and aspects of the game I’d missed. 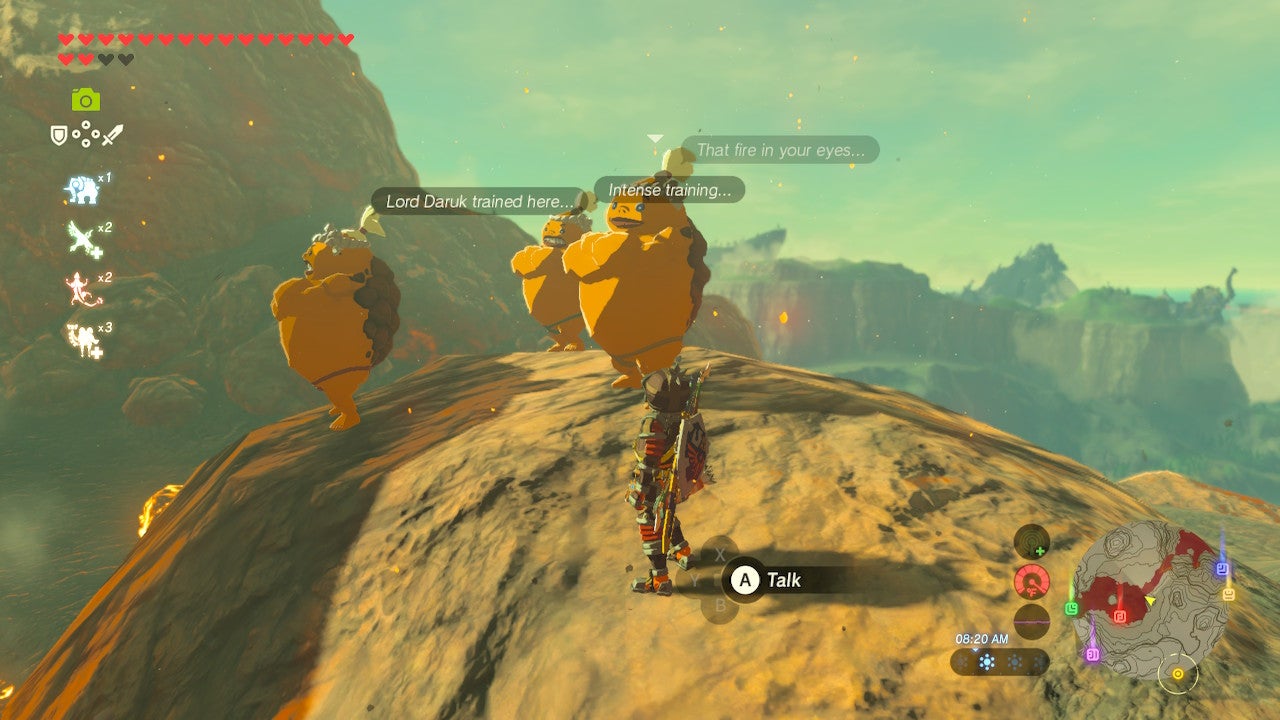 The Champions’ Ballad doesn’t just require you to visit places you may have neglected before, but in doing so also gives you reason to wear some of your odder gear.

In what I assume is its middle chunk, the Champions’ Ballad expansion puts four markers on the game’s map. Each is a location where Link will encounter the accordion-playing bird-man Kass, and each has three stone pillars that have illustrations of nearby locations.

Players need to study the illustrations and figure out where they are. You can most easily do this by looking at the game’s map to jog your memory, warping to a tower or other high lookout point, and then gliding around as you close in on the likely target area.

Once you find the right spot, you can find a little quest. One in the northwest involved shield-surfing down a mountain. One near the volcano challenged me to figure out how to get Link to safely stand in the middle of a lake of lava. One necessitated I do something cool in the target range that I’d neglected. One required me to shoot a horn off a flying dragon.

Fitting with Zelda tradition, these little challenges are more tests of wits than of reflexes.

Completing each challenge causes an entrance to a new shrine to emerge, and each of those shrines presents its own challenge. While the expansion’s early spike shrine signalled that all of its shrines would be tough, most that I’ve encountered since have been more clever than crushing. 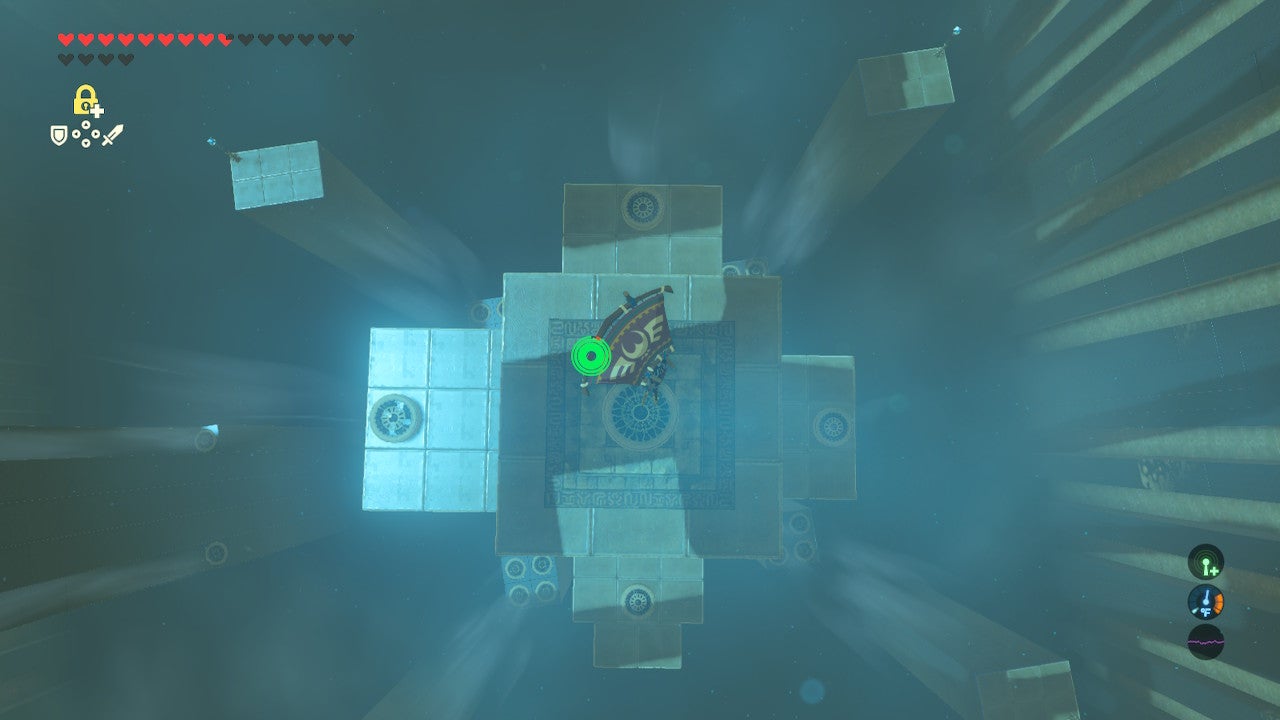 One of many creative shrines in the Champions Ballad, this one involves activating a series of fans that allow you to drift ever higher. As with the main game’s shrines, figuring out how to access the shrine’s hidden treasure chest is an enjoyable bonus challenge. And as with those main game shrines, the stuff that’s in the optional treasure chest is usually anticlimactic.

I’m in the midst of this part of the expansion where I’m tracking down all the Kass locations, hidden regional challenges and new shrines now, and am having a great time.

Perhaps I’ve been chastened by the far more difficult Splatoon 2 Octo Expansion, but I no longer see Champions’ Ballad as gruelling. It actually isn’t that tough.

What’s making a bigger difference, however, has been the pleasure I’m getting from rediscovering Breath of the Wild‘s world.

When the expansion’s quests started pulling me all around the map last December, it was mostly taking me to sights and sounds I’d just experienced. I’d been playing in that world throughout the year.

These days, however, my time with Breath of the Wild has been buried under sessions of Super Mario Odyssey and Doom and Celeste and Kirby Star Allies and so many other games I’ve played on my Switch. My command of Breath of the Wild‘s map – and Link’s abilities – has eroded just enough that it’s a pleasure to be brought back to it, to be gently challenged to discover it all again.

I’d missed it the first time, but the Champions’ Ballad seems best built to be experienced after a Breath of the Wild pause. I had my time away, and now I’m very happy to be back.