Everything We Learned About Assassin's Creed Odyssey After Playing It 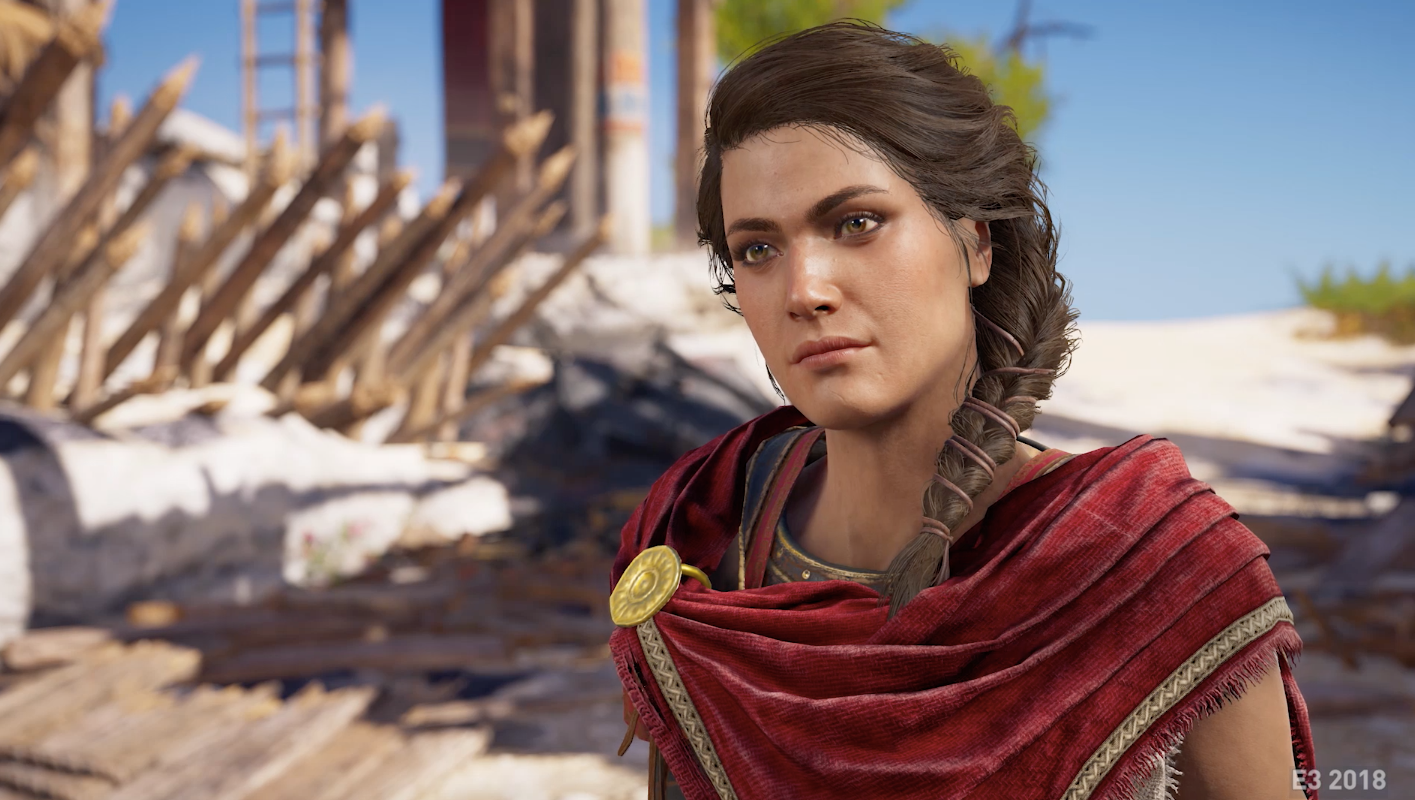 The next Assassin's Creed is going to turn heads. That won't just be because it's set in ancient Greece, nor simply because it lets you play as a man or a woman. It's also changing the series' combat yet again, offering more options for stealth, and even fleshing out the modern-day stuff that's been lacking in recent games in the series.

On a Friday in early June I was able to play Odyssey for over an hour and ask a lot of questions afterwards. I've done this thing before and always try to leave these sorts of events with as much information as possible for my fellow Assassin's Creed obsessives.

Over the years, I've tempered my expectations after the occasional disappointing entries in the series, but also learned to trust that, more often than not, the AC teams get things mostly right.

This time, while I saw a game that initially looked a lot to me like last year's Origins, I left with a clearer sense of how it will be different. Most of the changes are things I'm excited to play more of when the game comes out on October 5 on PS4, Xbox One and PC. 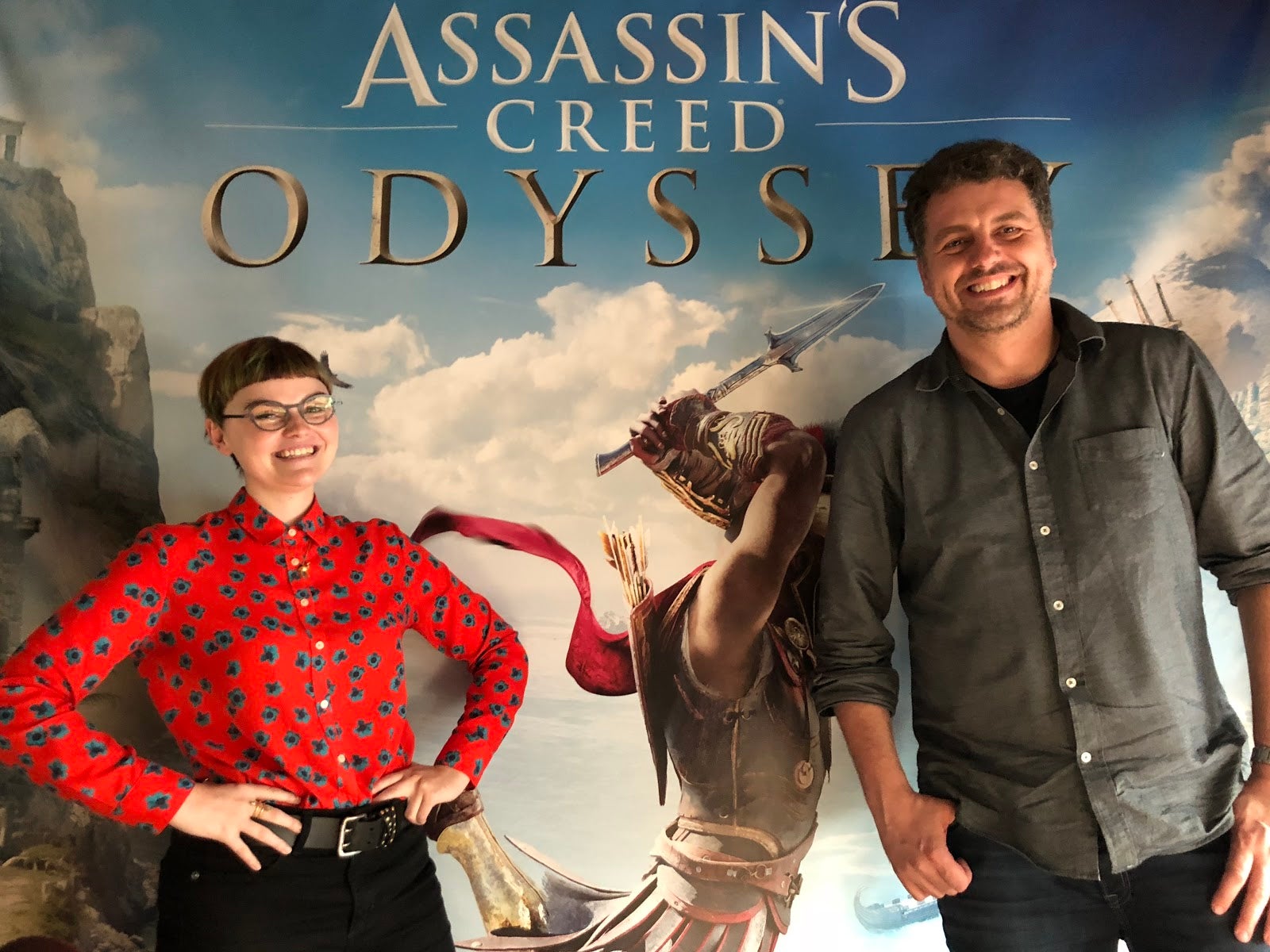 Narrative director Mel MacCoubrey has worked on AC games since Freedom Cry and creative director Jonathan Dumont was world director on Syndicate and spent several years before that designing World of Warcraft games. 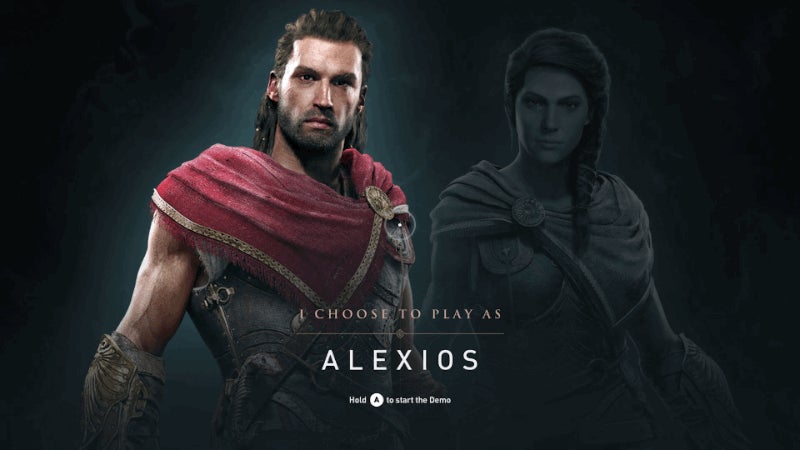 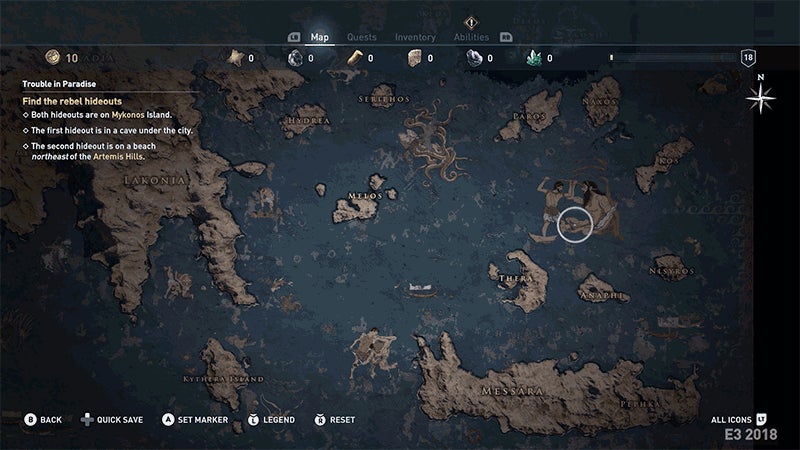 The bright area on the rightis the region that is available in the game's E3 demo. The game's producer ballparked the size of that one area as being roughly equivalent to that of the entire playable area of Assassin's Creed Brotherhood. 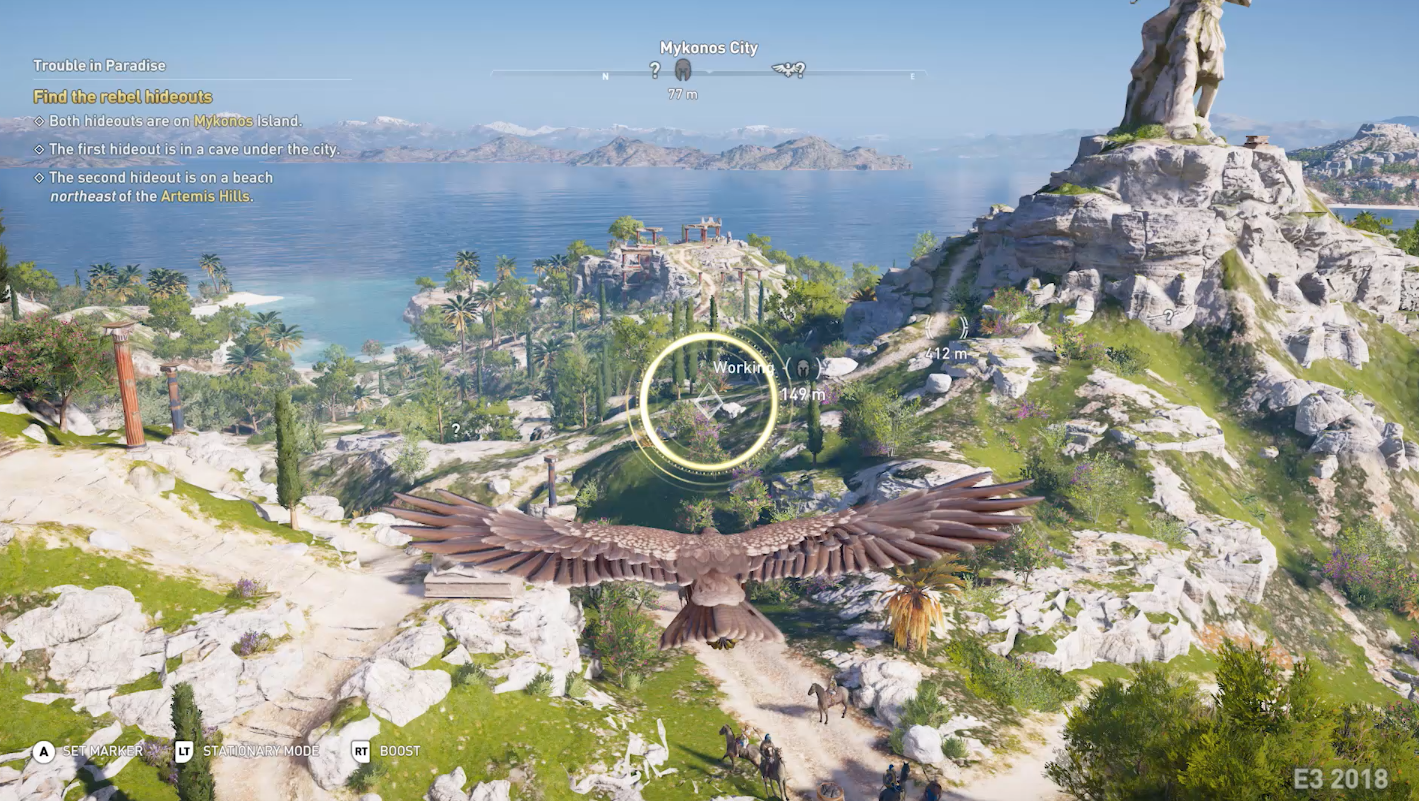 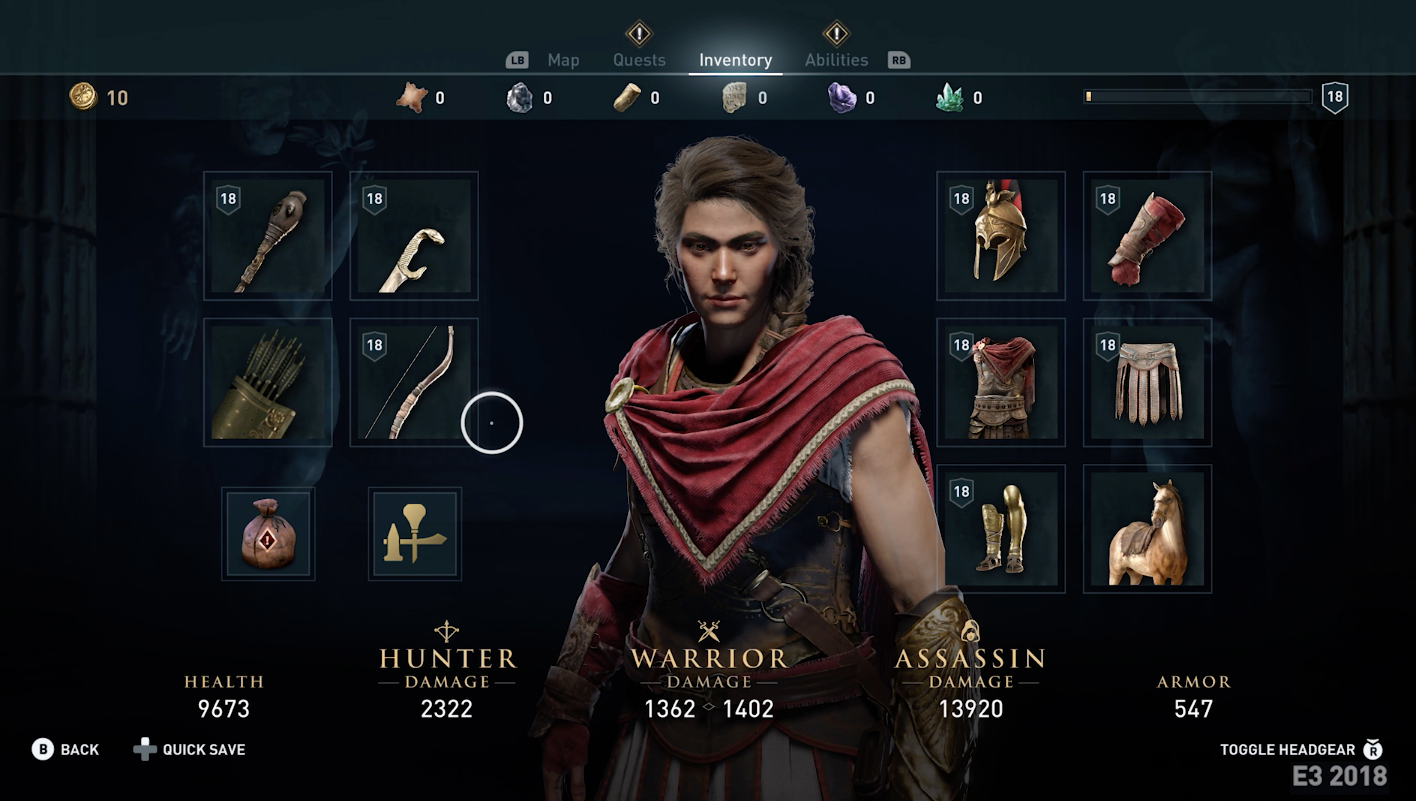 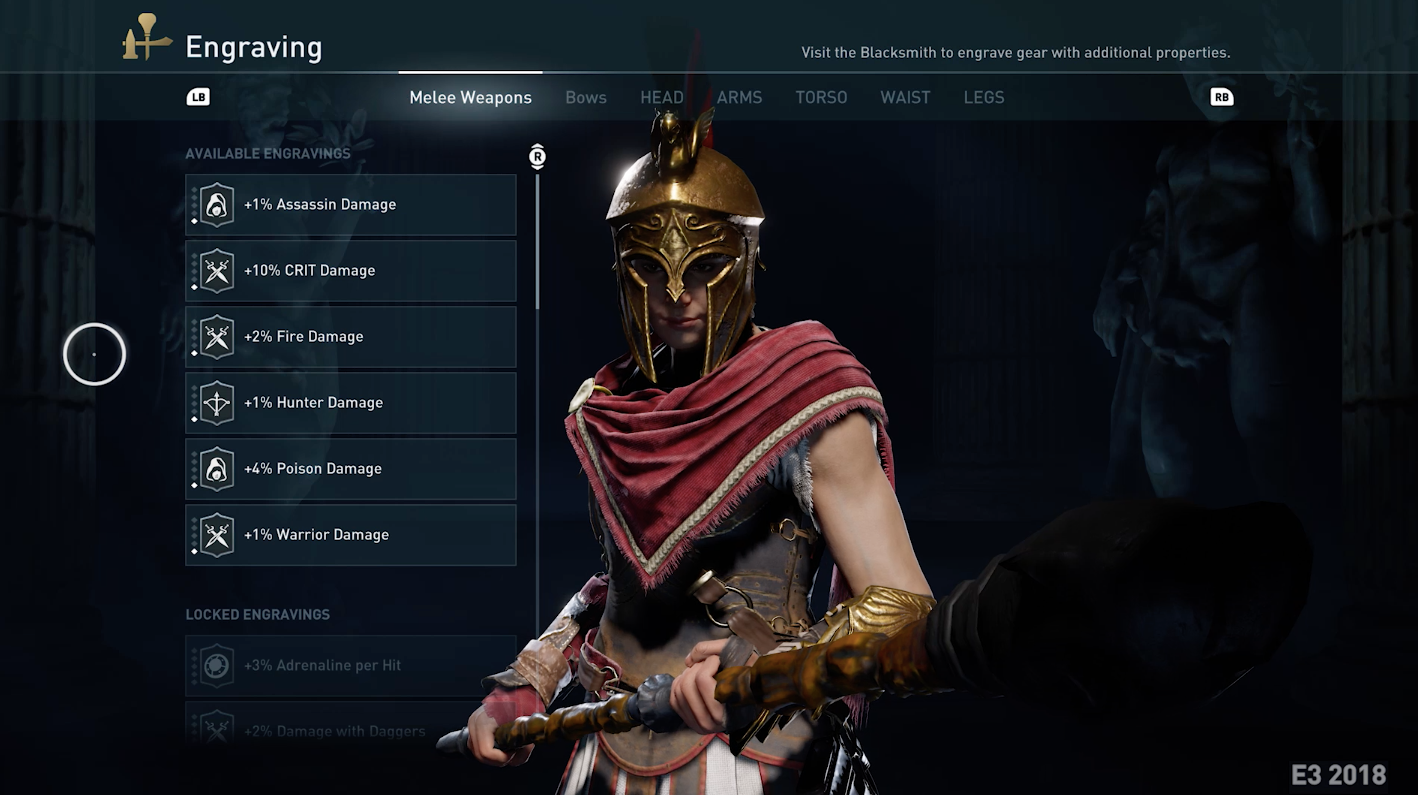 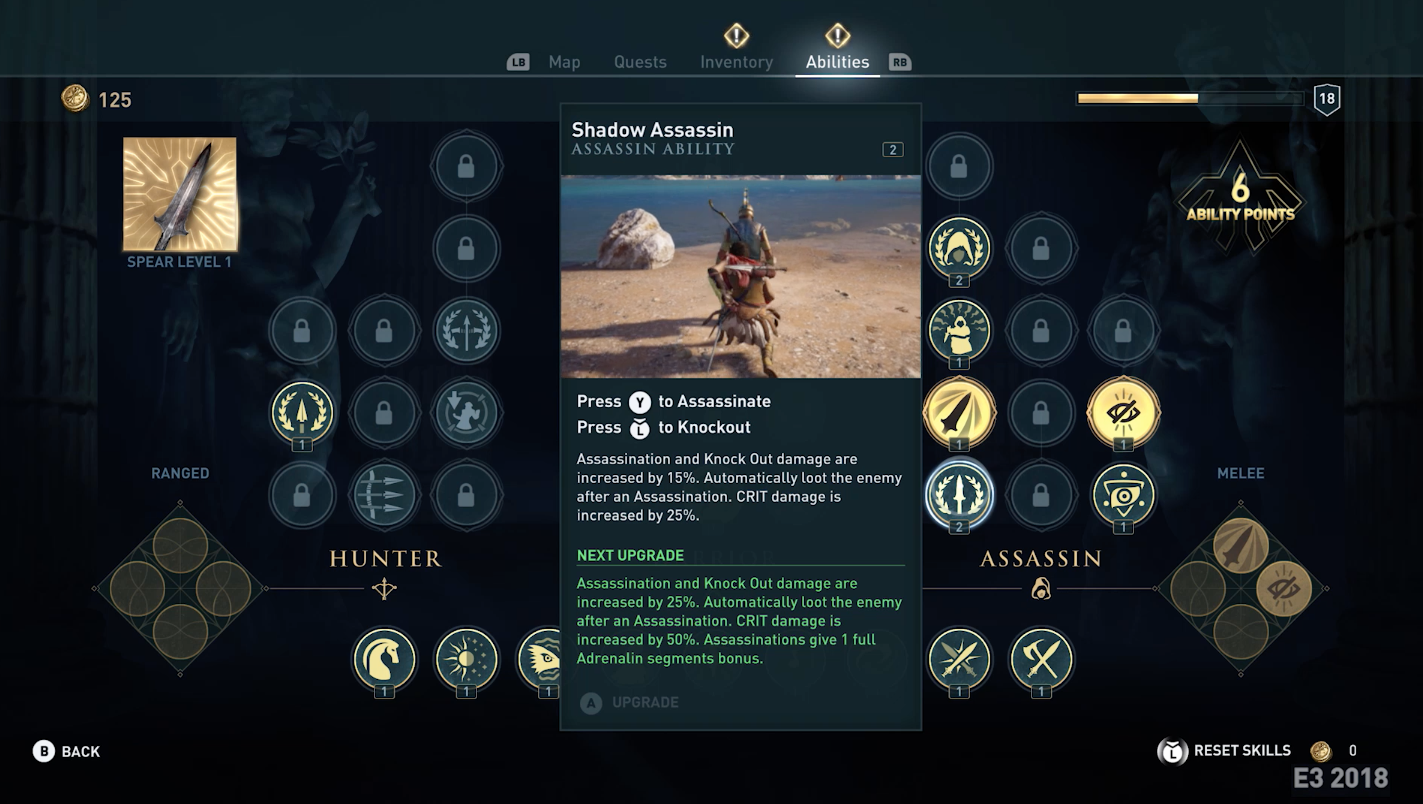 Several baseline skills are given to all players, but players then pick more skills from the hunter, warrior or assassin trees. In this screenshot, the warrior branch is hidden behind a pop-up that shows a stealth ability that can be upgraded after it is unlocked. 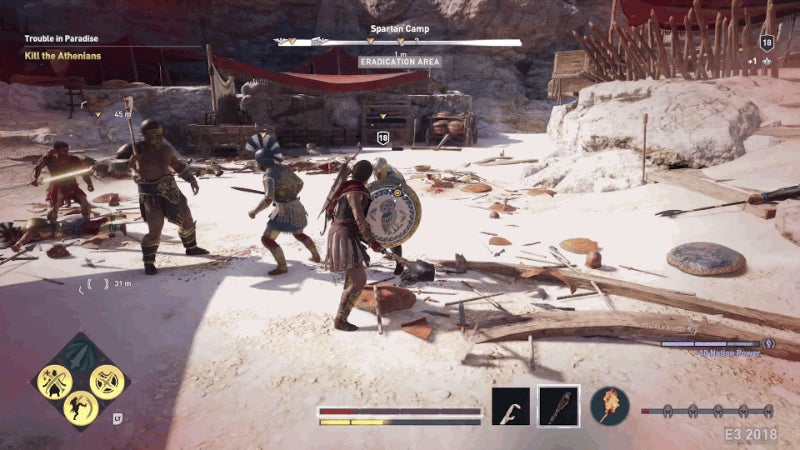 The shield grab costs a notch of adrenaline as it is spent with a button press. 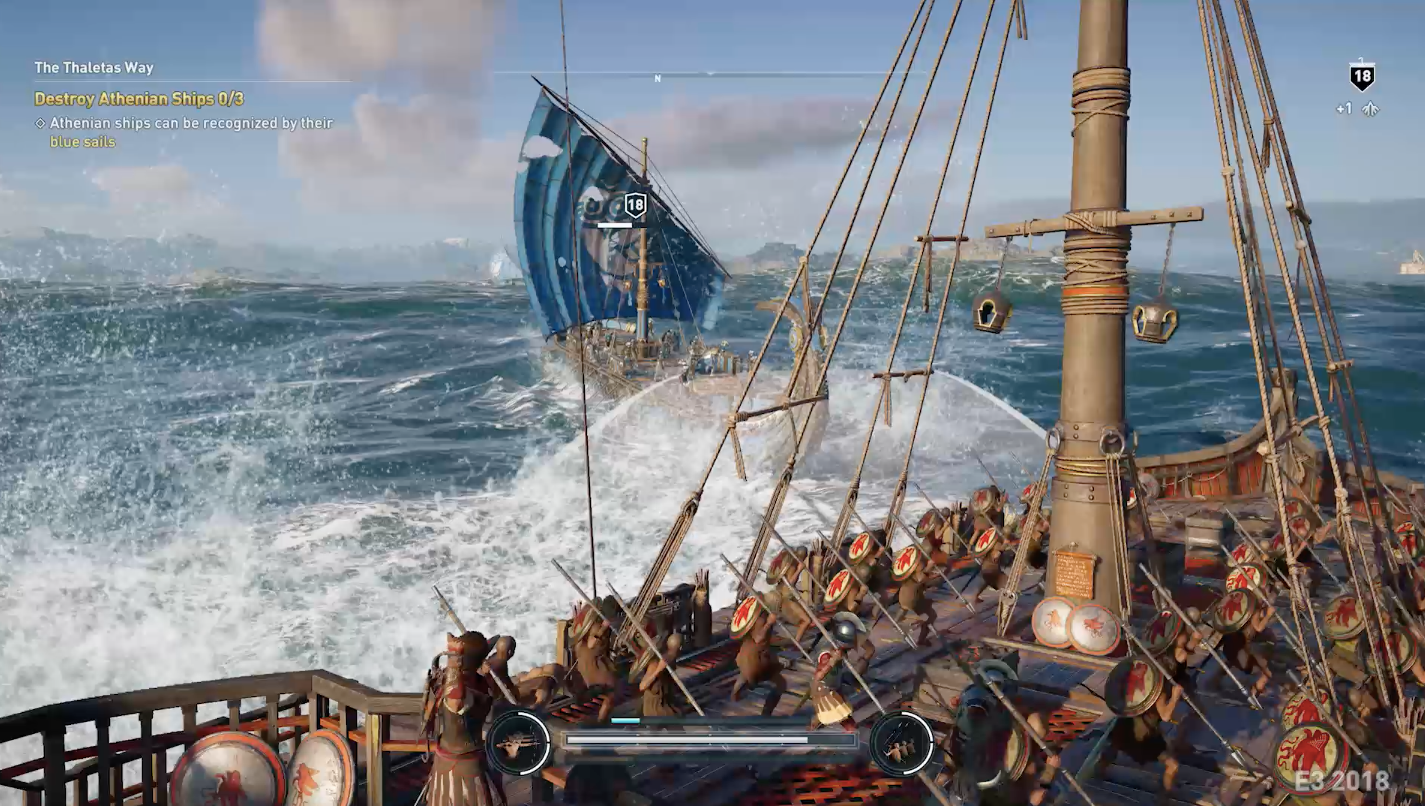 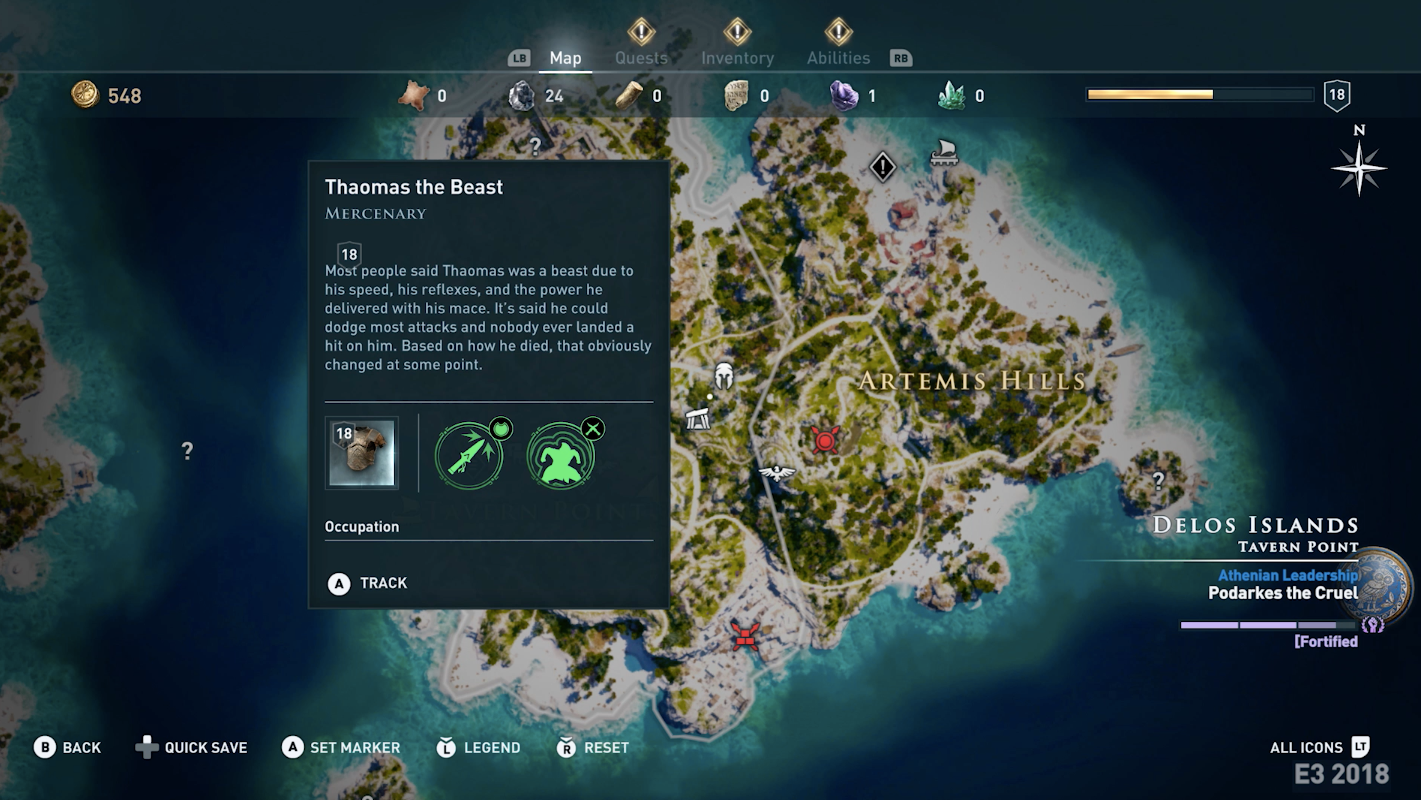 This regional map shows several locations of interest. It also has some information about a regional mercenary called the Beast. More importantly, a purple meter on the right shows the power of the region's leader. Certain actions in the region deplete the meter, supposedly making the leader an easier target. 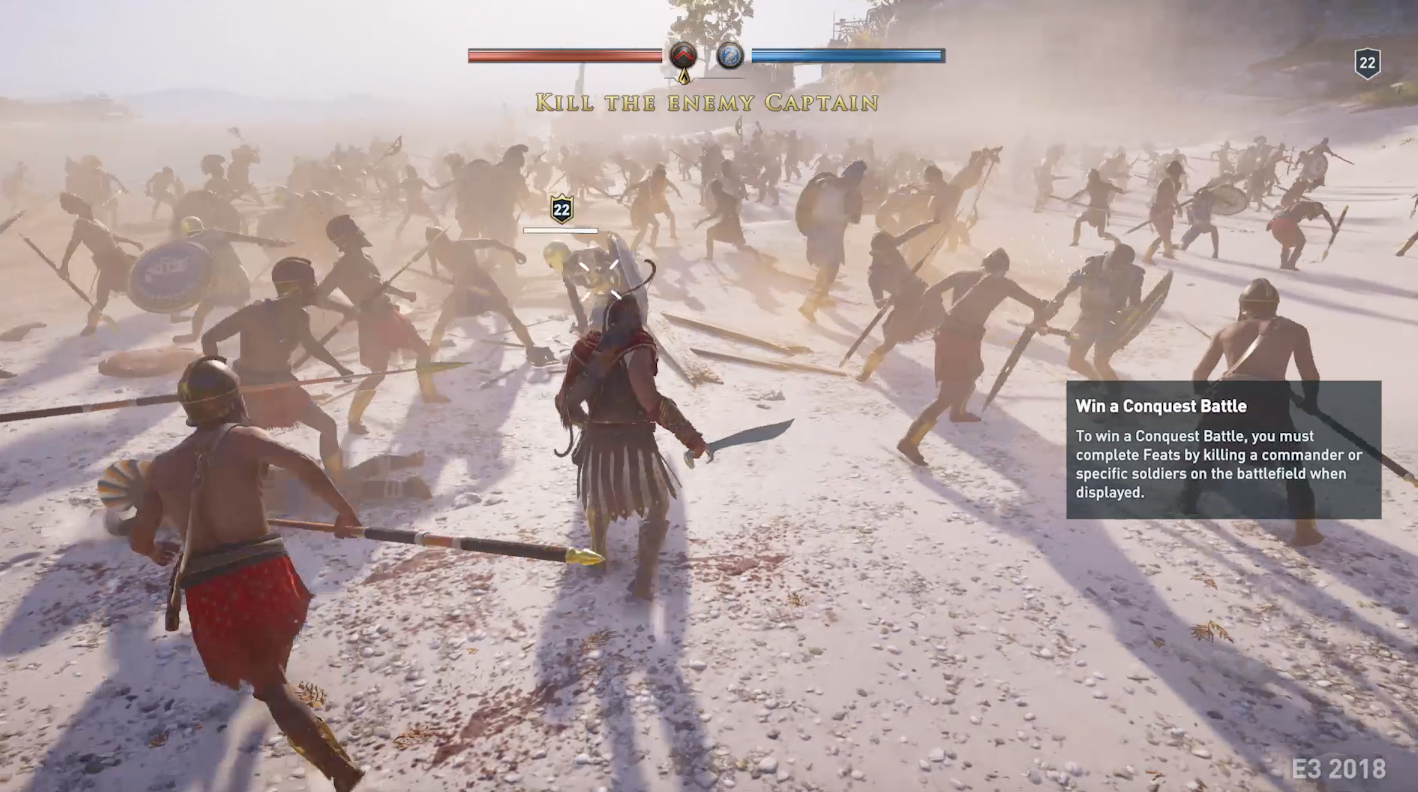 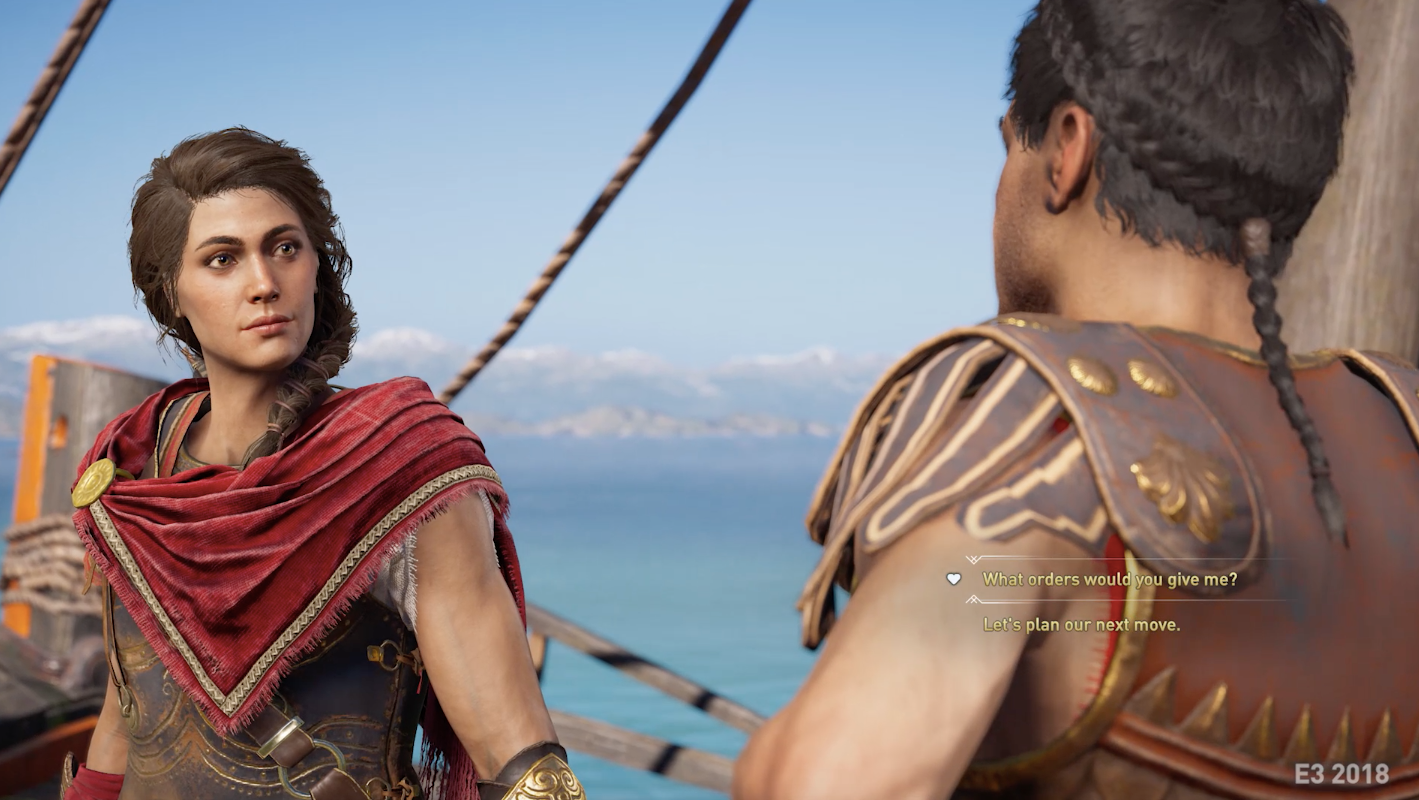 A romance dialogue option appears. See the heart next to one of the lines the player can choose? Kassandra has just made a crack about Thaletas' speech. He's pridefully shot back that he gives orders, not speeches. She (and the player) get a chance to flirt over that. 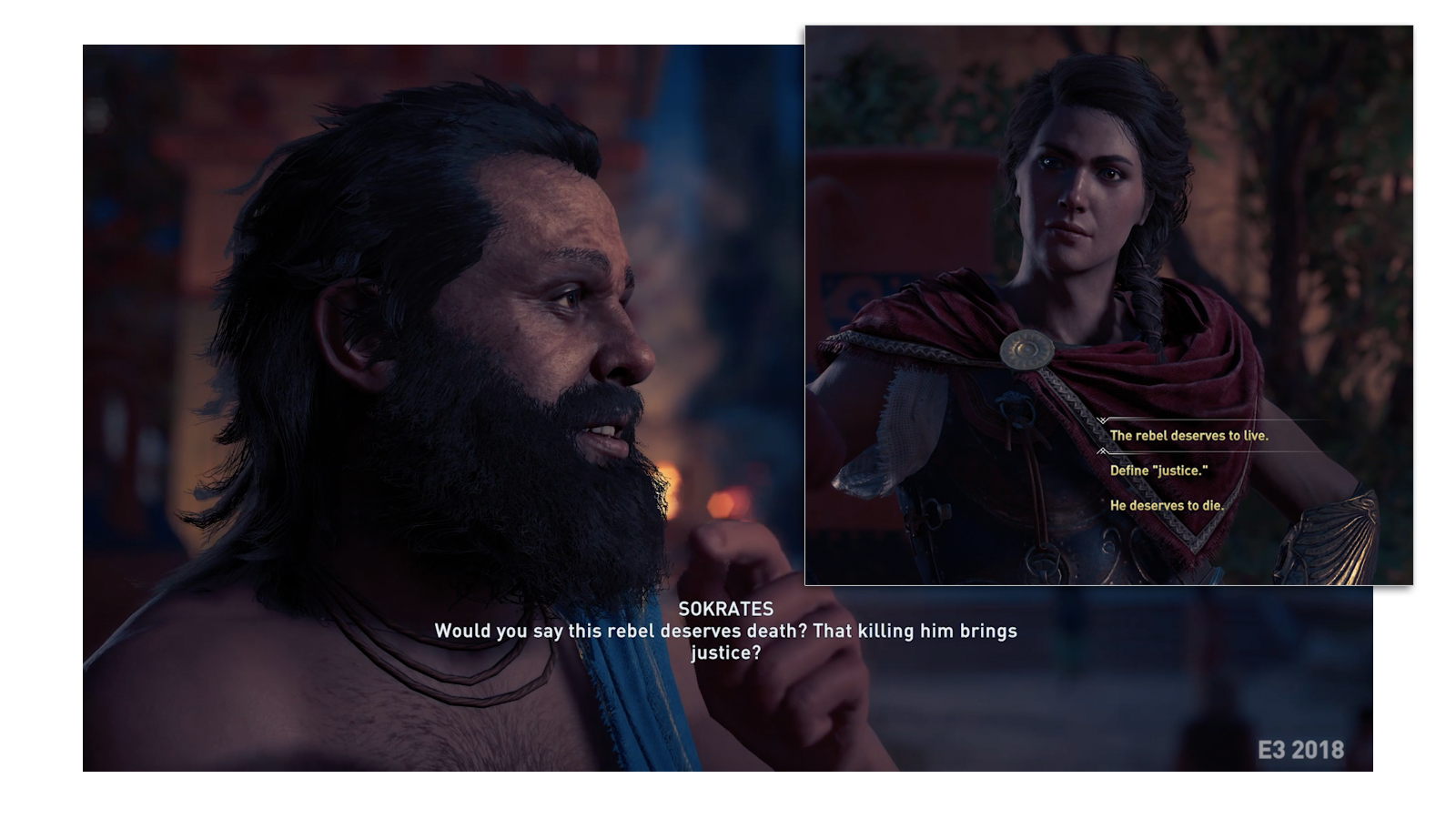 In the demo's Socrates quest, the philosopher describes a not-quite hypothetical scenario involving a rebel who stole for a good cause but killed a guard in the process. The player can argue who is right or wrong. Then they can try to rescue the man and debate Socrates some more. Dialogue may be malleable to suit the action. Socrates commented on a guard I'd killed during the mission. He wouldn't have said that, a developer told me, if I hadn't killed anyone. 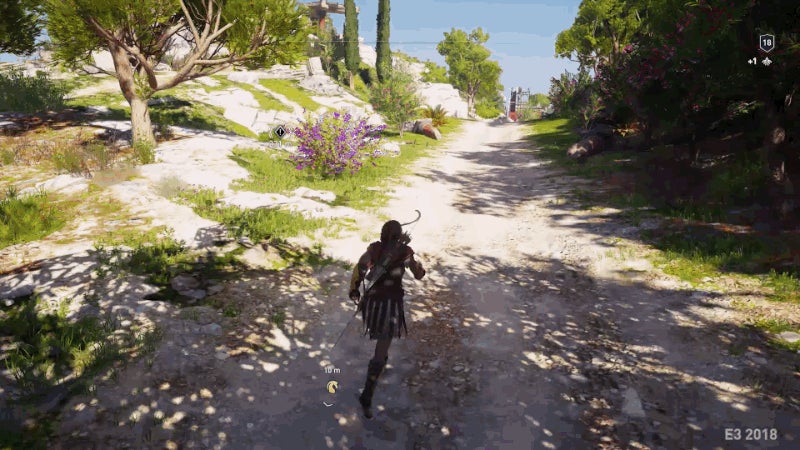 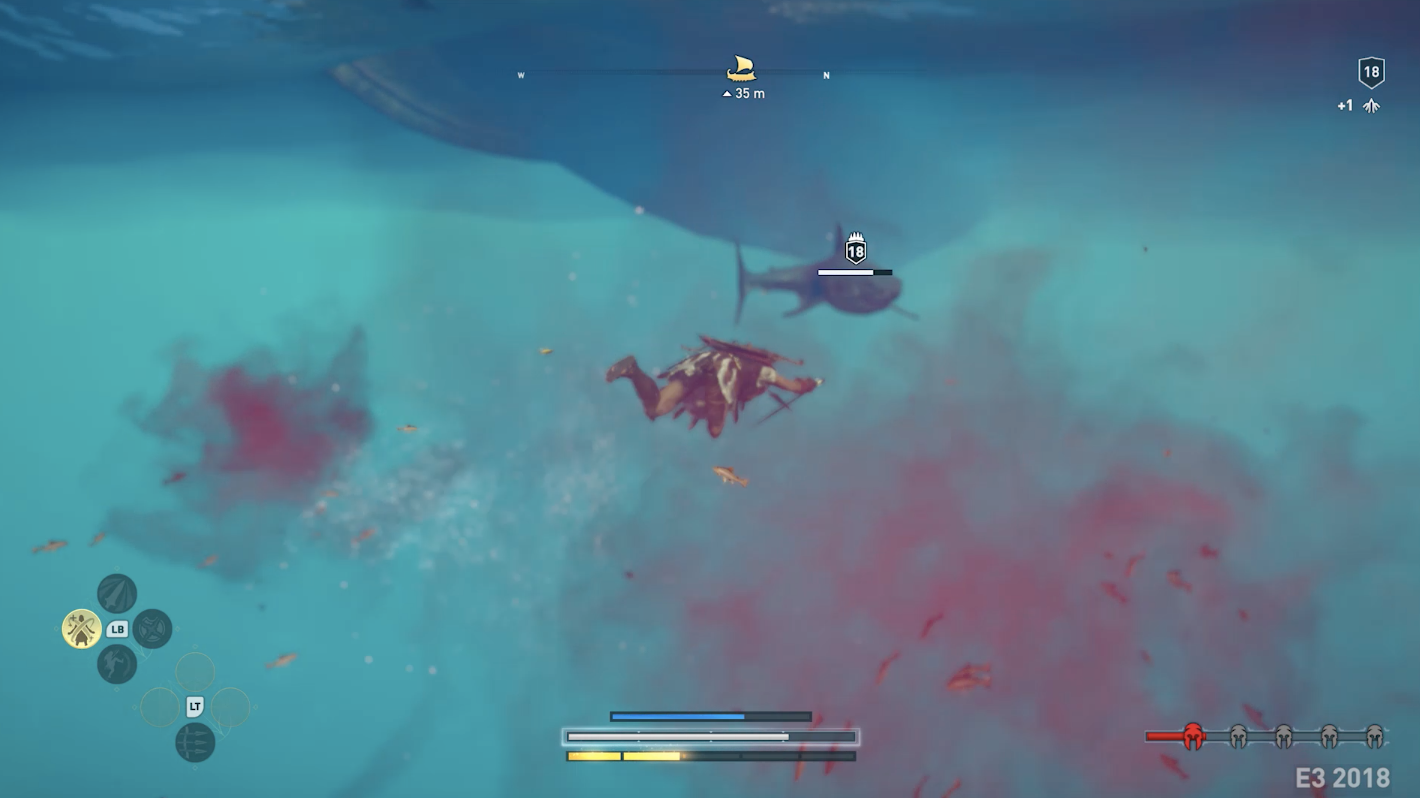