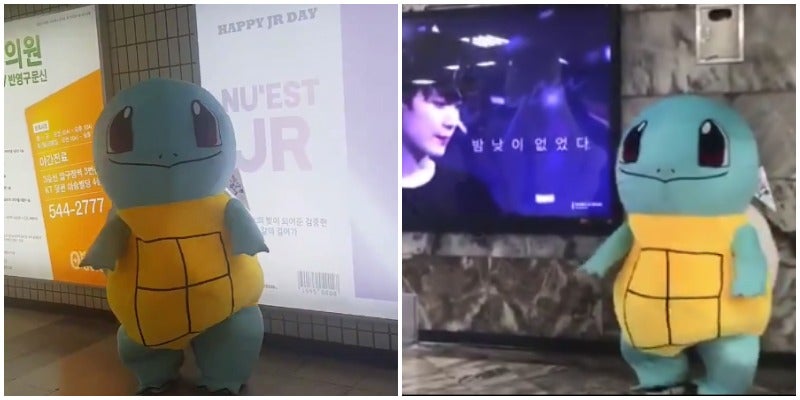 JR from the Korean boy group Nu'est recently had a birthday. According to SBS, fans rented out subway billboards with birthday wishes.

JR wanted to go see the ads for himself and dressed up as Squirtle as he ventured out in public.

Below are images of JR, apparently dressed as Squirtle, checking out the birthday greetings. Doesn't appear he was recognised and this one way he could see the birthday billboard without causing a scene.

jr in a squirtle costume roaming the metro and then running when he sees his birthday ad! happy birthday, nation’s leader ???? pic.twitter.com/WUkYELMB7V

Credits to whoever's gif this is because this is the best thing ever #NUEST #JR pic.twitter.com/3BojBE1NhE

i wont stop talking about jrie visiting his ads in a squirtle suit;~; hes the sweetest, softest, cutest human ever pic.twitter.com/rM1SXPeGnf

IM LAUGHING SO HARD AT THIS GIRL she was taking a video fo jr’s ads and was like “wtf” when she passed by squirtle nOT EVEN REALIZING IT WAS JR pic.twitter.com/L1kdJeNl14

JR probably struggling with the squirtle costume but the manager didn't let his hand go at all. Going✈UWU pic.twitter.com/QSWWoFYlNA

JR running as Squirtle is still the cutest thing ever

And just how many mascots does Pledis have lmao? Do they have a Macot Rental subsidiary? I've seen Nuest in a lot of costumes already in the last few years ????#Nuest #김종현 #김종현_생일축하해_같이걸어가 pic.twitter.com/tExYXkcWOc

HOW PRECIOUS IS THIS BUB? HAPPY BDAY, JR! I hope you didn't fall while wearing that squirtle costume (and if you did i wish someone will upload the video i need it). Have an amazing day you amazing human being! ❤️ #HappyJRDay pic.twitter.com/JNLM93Dmrc

the person behind that cute squirtle outfit is actually oppa af #김종현_생일축하해_같이걸어가 pic.twitter.com/IOg8Wb9F4z