When The Last Of Us Part II‘s new trailer debuted at this year’s E3, protagonist Ellie enjoyed a slow dance and kiss with another woman. My queer friends and I confessed to one another that we were assuming the worst.

That happy girl will probably die, because while games allow us to be many things — space marines, mages, and tenacious heroes — they rarely allow queer people to be happy.

Queer people struggle, as do our intersectional allies. The news is full of horrible daily reminders to all marginalised people that their lives and comfort exist largely at the whim of the privileged. That means bakeries refusing to make your wedding cake or laws meant to keep you out of restrooms.

That struggle has been fetishised by media and is one of the defining traits for queer characters in media. Video games have included more queer characters in recent years — Dorian in Dragon Age: Inquisition, Ellie in The Last of Us, Veronica Santangelo in Fallout: New Vegas and countless others — but all of their stories are tragic. Their partners and lovers are killed. Their families disown or shun them. They seem to be magnets for catastrophe.

Rarely do their stories end in comfort, either from others or the larger world in which they live. We have more gays, trans-people, bisexuals, and others games than ever before. Yet we, comparatively, also have more of their corpses.

BioWare games often include queer characters; the studio took early strides to include gay romance options and trans-people in their works, with games like Jade Empire and Mass Effect offering bisexual romances. Since then, BioWare has expanded to include bisexual mage revolutionaries, queer princesses, and gay soldiers in their games.

These characters are, largely, defined by a pain that their straight counterparts do not share. That pain does not stem from queer marginalisation, but rather, fantastical metaphors that serve as an in-world analogy for anti-LGBTQ bigotry.

Consider Dragon Age 2‘s rebellious mage Anders. A runaway from the church’s oppressive policy of mage isolation, he seeks to free his comrades and usher in a new age for his people. Anders’ struggle comes to a head when he tries to save his ex-lover Karl Thekla from the iron grip of the Templar Order. To Anders’ dismay, Karl has been made Tranquil, a condition where his mind is magically lobotomised.

Karl asks the player to kill him, and if they do not comply, Anders will do it himself. The narrative demands that Anders follow a road to violent revolution; Karl is a sacrifice on that road. The story illustrates the way the in-game society treats mages, and there is a clear parallel here to queer experiences.

Furthermore, it speaks volumes that Anders’ struggle, which borrows heavily from real world queer suffering to pack its emotional punch, requires that his gay lover die — perhaps even by Anders’ own hand. 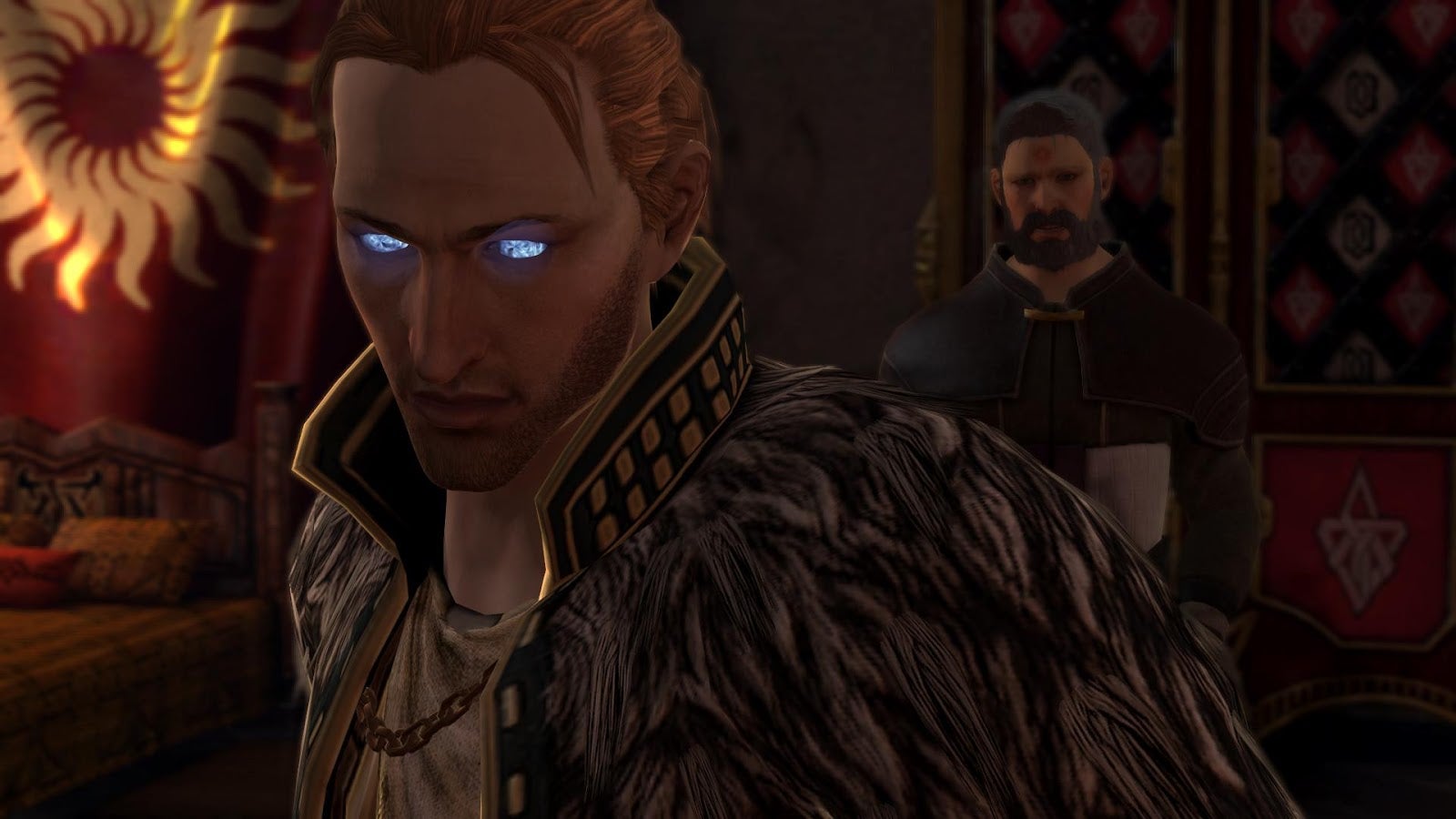 Few, if any, of BioWare’s queer characters proceed in their storylines without losing their partners; some arrive with these scars at the outset. Mass Effect 3‘s Steve Cortez has two traits: he is an excellent pilot and he is mourning the death of his partner Robert. He is one of the only explicitly gay romance options in the game, and his story revolves around his grief. Jade Empire‘s bisexual pirate Sky mourns the death of his wife and child.

Dragon Age‘s bixsexual assassin Leliana gets sent on a potentially violent crash course with her ex-lover Marjolaine. The most contented queer character that BioWare gives us is Dragon Age: Inquisition’s transgender Cremisius “Krem” Aclassi, whom the player can interrogate, rudely if they want, asking personal questions such as whether or not Krem’s considered the magical equivalent of sex reassignment surgery.

Krem’s happiness is so rare that it is considered a curiosity.

Tragedy often serves as a backstory for straight characters in role playing games, too. Party members of all backgrounds hide hidden pasts and personal struggles that the player can learn about and solve.

But where the mighty Krogan warrior Wrex might rise to lead his species, and the dwarf Varric Thetras ascend to nobility, queer characters’ happy endings often end up being as romance options for the player. We are, more often than not, unsaveable unless we are fuckable, and even that is up to the player.

Games that include queer romance sometimes even place the success of that romance in competition with the success of society as a whole. In Life is Strange, teenager Max Caulfield saves her childhood friend Chloe after unlocking the ability to manipulate time.

Throughout the rest of the game’s episodes, the two women get closer and closer, and the budding seeds of romance bloom between them. But Chloe already has lost one lover before the game even begins. Life Is Strange revolves around the search for Chloe’s missing girlfriend Rachel Amber. That search uncovers a string of sexual abuse and murder in the town of Arcadia Bay, with Rachel as one of the victims.

After uncovering her body, Chloe gets killed by the culprit. That’s two dead gays for the price of one.

Yet, even when Max alters reality to save her friend or bring her happiness, Chloe suffers. In an alternate timeline where Max prevents Chloe’s father from dying, Chloe ends up in a car crash and is paraplegic. In this timeline, Chloe begs Max to euthanise her; the story shuts down both disabled and queer people’s right to happiness in one fell swoop.

In a timeline in which Max prevents Chloe’s murder, a massive hurricane barrels down on Arcadia Bay instead. The pair conclude that the storm is an anomaly created in response to Max’s time-travelling. The final choice is to either sacrifice the town or to travel back in time and allow Chloe to die.

Narratively, the choice feels empty. Max’s personal growth up to this point revolved around a growing understanding of her place in society and learning to accept consequences for her actions. Chloe begs her friend to go back and let her die.

If the player chooses this, the ending sequence is detailed and moving. We see Max’s horror and pained acceptance that the girl she fell in love with is gone forever. This culminates in a scene at Chloe’s funeral. If the player sacrifices Arcadia Bay, a perfunctory cutscene plays during which the pair drives through the wreckage.

That scene is scored with music previously used in an earlier episode. It is rushed and not up to par with the other ending.

This juxtaposition makes Life is Strange‘s ending perplexing and disappointing. The player must choose between queer love and the literal survival of a small town. With the deck stacked like that, the only unselfish action for Max would be to give up her love for the betterment of society.

Chloe can’t survive. No matter how Max fights and no matter what magic she wields, she also has the misfortune of being a queer protagonist in a video game. Her happiness, as well as her partner’s life, were always on the chopping block. 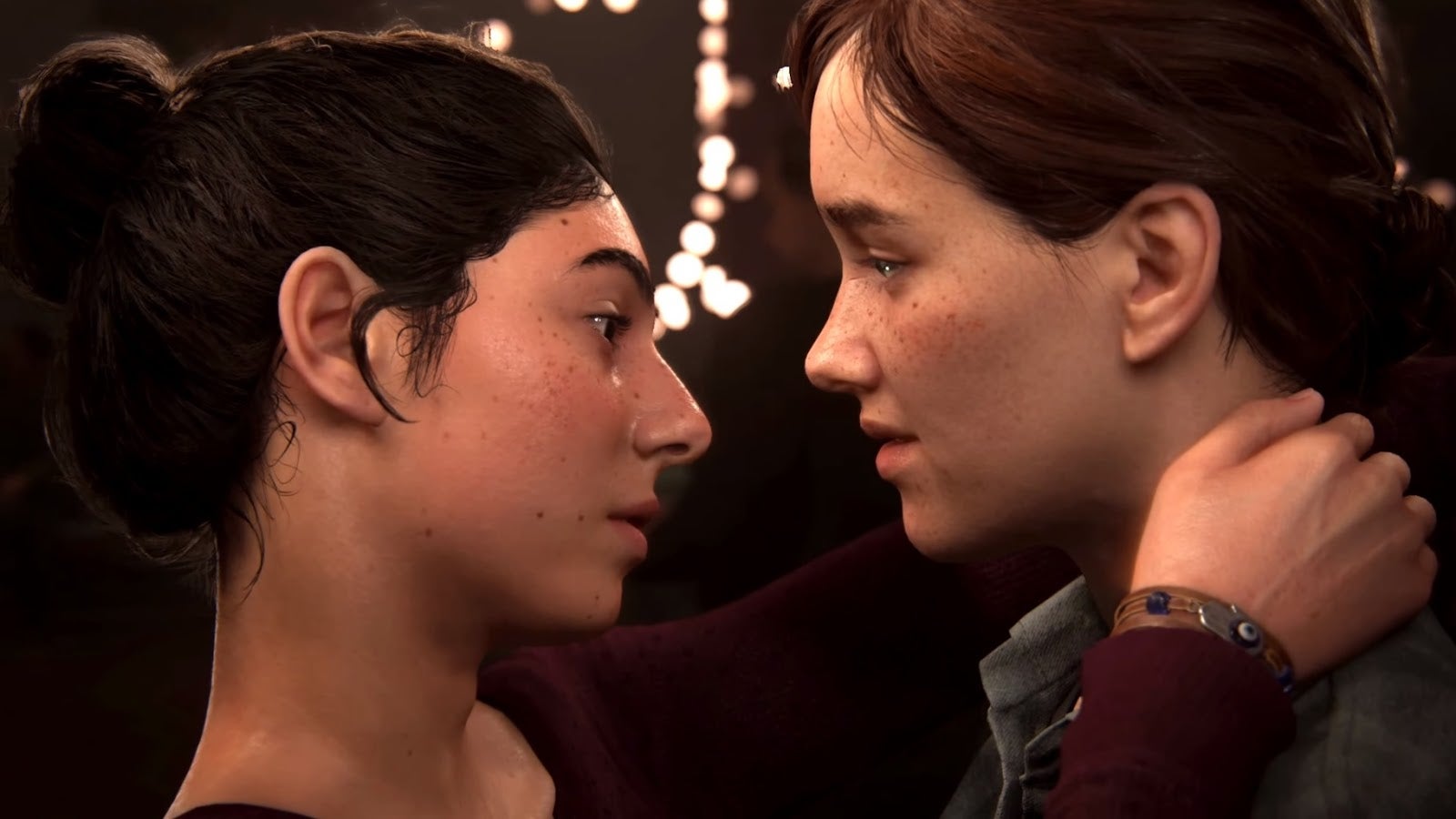 Because I have seen this story so many times, I cannot help but worry that the kiss Ellie shared in The Last of Us Part II‘s trailer is a kiss of death. The post-apocalyptic genre is teeming with corpses already, and moments of respite are often shattered by loss and tragedy. We’ve seen it in The Last of Us multiple times already, including with queer characters.

The reclusive survivor Bill, guiding Joel and Ellie through his booby-trapped town, stumbles across the corpse of his partner Frank. In the DLC campaign Left Behind, a younger Ellie sneaks into a ruined mall with her friend Riley. The pair dance and kiss before before the Infected horde bite them.

Ellie avoids infection — a key plot point in the main game — but Riley, we know, does not survive. She suggests the two of them commit suicide together.

The Last of Us focuses on the frailty of society and individuals, both morally and in the flesh. It makes sense that the characters would endure loss. Joel copes with the death of his daughter and his grief over his inability to protect her; he gravitates to Ellie, who serves as a surrogate child and a bittersweet balm for his prior loss.

In the end, he gets what he wants — to serve the Hero Dad role — although it comes at the expense of many lives and lies.

Ellie seems to have found some of what she’s lost at the outset of The Last of Us Part II, based on the promotional materials released so far. She has found romance again, although it remains to be seen how that relationship will go.

Given the series’ tone and track record, and considering the pile of queer corpses in media as a whole, I cannot imagine a scenario where she gets to keep what she has found.

I want these queer characters to have happy endings, or at least different ones, but I still love the stories that I have, imperfect though they may be. BioWare’s cast of heroes provide examples of bravery and humility that I strive to emulate. Life is Strange‘s tender romance captures a sense of early sexual awakening. The Last of Us‘ Ellie is a goddamn survivor.

All of that is fantastic, but it comes at a price. That price, often, is the agency and happiness of queer characters.

But why do we have to pay that price, and so often? I’m not suggesting that the queers should always get to dance in a field of gumdrops at the end of every game in which they appears, but considering the real world’s continued eagerness to trample the marginalised, one of the most radical things art could do right now would be to show us a world in which we are more than our suffering.