Magic Is Currently Being Dominated By A Little Goblin 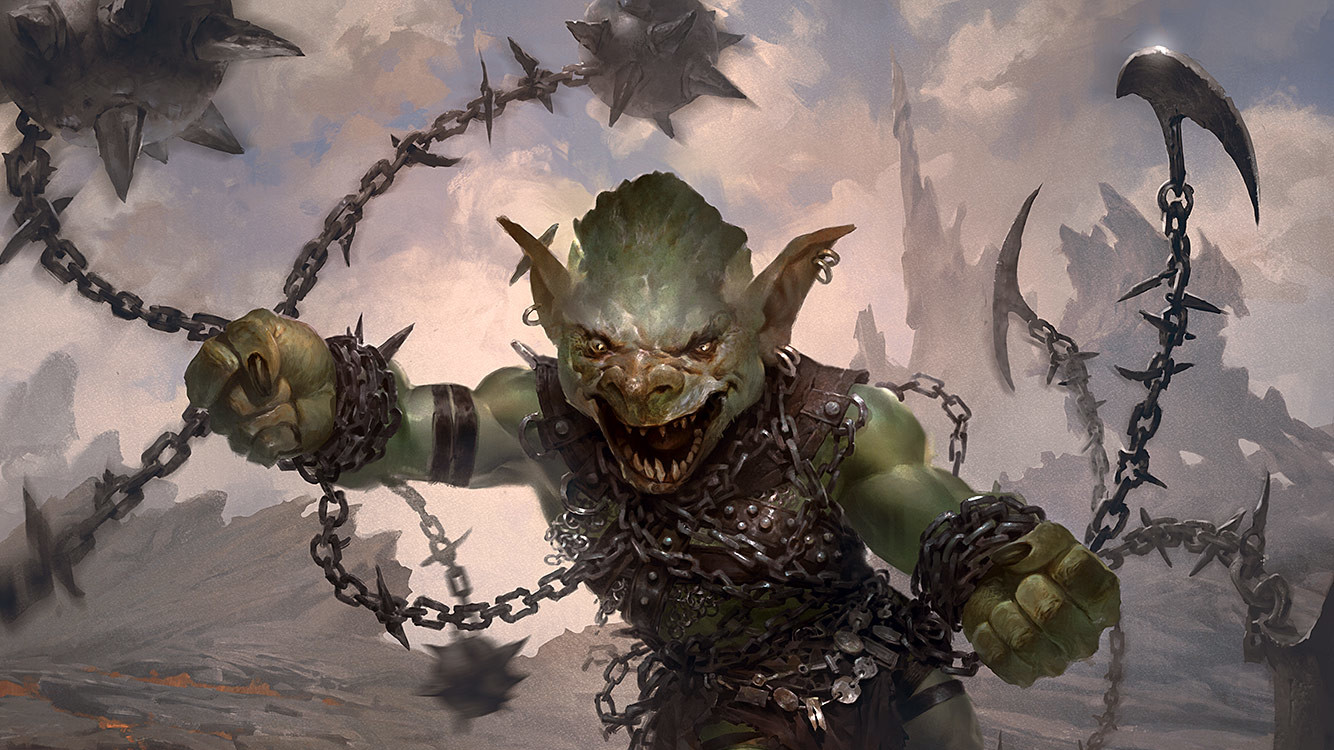 This weekend was Pro Tour Dominaria, the first major professional play event taking place after the recently released Dominaria set of Magic: The Gathering, and the most important person in the entire tournament was a fun little goblin with a jump rope.

Well, it might be a chain. And that goblin might be whirling that chain around her head, hitting everyone in sight and generally just being one of the most annoying and impactful cards printed in recent memory. In fact, the card has been so impactful that it has literally warped the Standard format of Magic: The Gathering around it.

That might come as a surprise if you’re not super invested in Magic. After all, the Standard format contains over 1,500 cards that stretch back to the fall of 2016 and the release of the Kaladesh set.

When you set out to make a Standard deck, you can use any of those cards. With that wide of a field, you might expect to see some real diversity when it comes to deck construction in a premier professional play event. 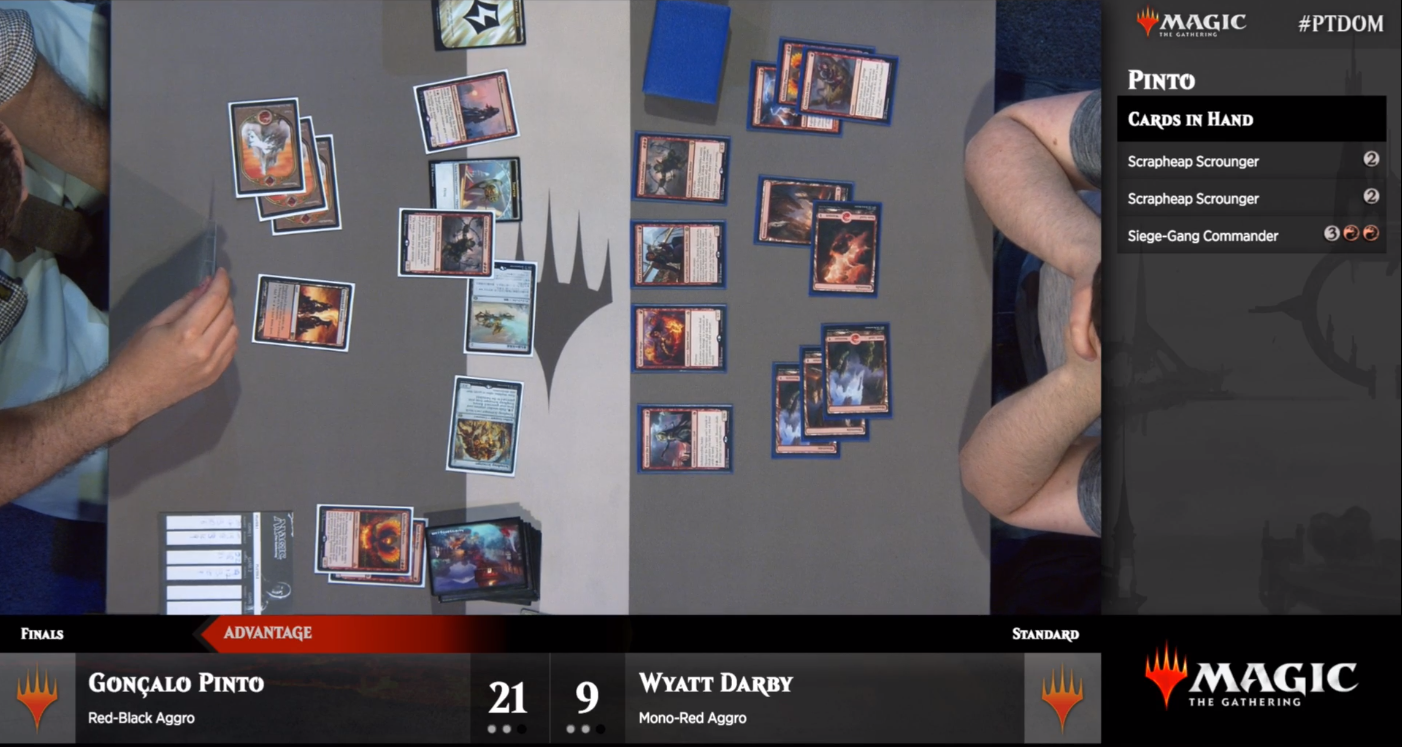 Whirlin’ in the finals.

When Pro Tour Dominaria broke to the top eight contenders today, the only player who was not running a full set of four Chainwhirlers was the lone blue-black control player Ernest Lim Pei Jin.

After his elimination in quarterfinals, the goblins reigned supreme. During tinals between Gonçalo Pinto and Wyatt Derby happened earlier today, each player had their own personal Goblin Chainwhirler out on the board. 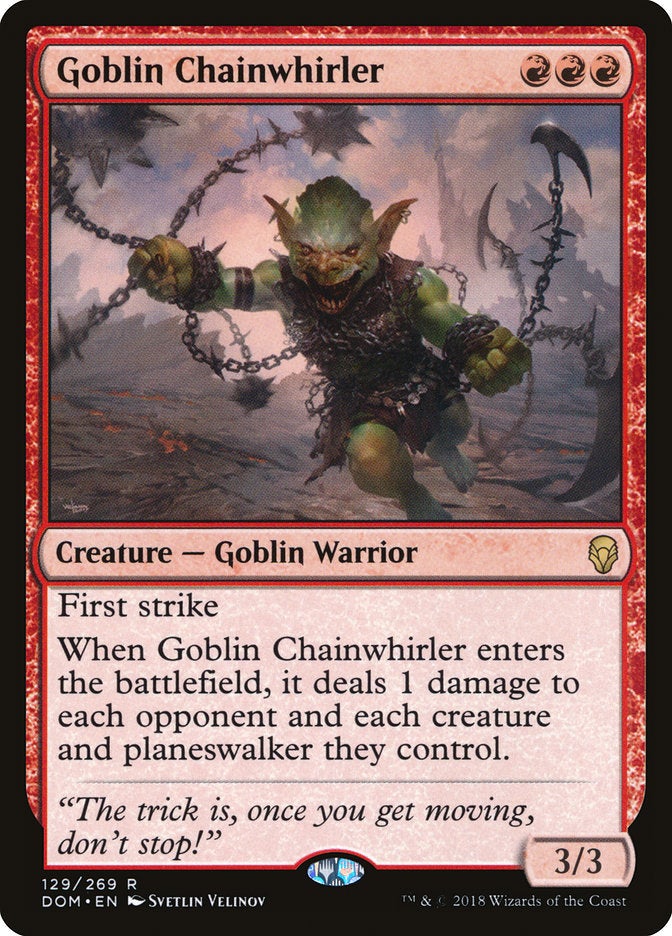 So why? Let’s look at the card. First, its mana cost (the resources you need to pay to put it onto the battlefield) is three red mana. From a design perspective, this is a restriction, and it means that you are going to need to heavily bias your deck toward the colour red when you are building it.

Your deck will be most consistent when you are mono-coloured (meaning only red) or dual-coloured (when you have two colours like the popular red/black decks we saw at this Pro Tour). This goblin is part of a “cycle” of cards in the Dominaria set that are all designed around committing decks to specific colours, but other than Steel Leaf Champion in green, none of the others have made much of a splash.

Second, we’ll look to what this little gobbo actually does. It has a power/toughness (think attack power/HP) of 3/3. Getting a 3/3 for three mana is already a good rate, but the Chainwhirler also has first strike, meaning that when it enters combat with another 3/3 creature, it will strike first.

The effect here is that blocking or attacking into the goblin is very hard, especially early in a game of Magic.

Third, check out its ability. When it enters the battlefield, Goblin Chainwhirler deals one damage to an opponent and one damage to each planeswalker and creature they control. While the rest of the card is just “good card stuff” that will impact a game, this little minor earthquake is heavily responsible for so many pro players, and the overwhelming majority of the top 8 of Pro Tour Dominaria, building their decks around this card.

One benefit is that it shuts down entire deck types. Mana accelerating creatures like Llanowar Elves, finally reprinted in Dominaria after a long absence, often have a single point of toughness.

Similarly, the previously-loved Earthshaker Khenra that so dominated last year is rendered unplayable by the goblin simply because of its single point of toughness. So if your deck strategy is dependent on getting out an elf and using it to power out bigger creatures or using fragile creatures to eke out a win, Goblin Chainwhirler simply shuts you down as a matter of fact.

Additionally, powerful planeswalker cards with repeatable effects are severely threatened by the Chainwhirler. Since they were introduced in Lorwyn over a decade ago, it has been a viable strategy to create decks around playing and protecting planeswalkers and riding their marginal benefits to victory.

However, the goblin functions as a direct counter to some of the most prominent planeswalker cards in the standard format. Using Teferi, Hero of Dominaria‘s or Chandra, Torch of Defiance‘s board-stabilizing abilities means that they are both one whirling chain away from the graveyard. The creature also easily outraces Karn, Scion of Urza.

Goblin Chainwhirler’s presence has a kind of cascade effect simply due to all of these specific interactions. As a card, it cuts off strategies of deckbuilding.

Watching the past two days, the story of Pro Tour Dominaria was not about interesting decks and excellent players. Instead, it was all about how the world of pro players were attempting to adapt to a tournament where entire strategies were cut off.

This isn’t wholly out of the ordinary. Formats of Magic play are often dominated by particular strategies afforded by specific cards. Ramunap Ruins produced a similar effect during 2017, and in 2016 we saw an “Eldrazi Winter” in the Modern format due to both Eldrazi Temple and Eye of Ugin. Cards are printed, strategies evolve, and the game keeps on ticking.

I have no doubt that either the metagame will shift or Wizards of the Coast will ban a card (they have proven themselves more than willing to adjust a metagame this way).

Whatever happens, Goblin Chainwhirler has served a game design lesson about what the real costs of building around a triple-red card are (there don’t seem to be many) and how much giving a good card a big, splashy effect impacts the game (a massive amount).

I have to admit that I’m proud of this little goblin for being so big and special. After all, she’s rendered over 1,500 cards null and void.