microsoftxboxxbox onexbox one sxbox one x
<em>Super Mario Odyssey</em> is available only on the Nintendo Switch. Over 9.7 million copies were sold between its launch in October and the end of 2017. Image: Nintendo

Microsoft is in a weird place. It has sold an estimated 30 to 50 million Xbox Ones, placing the company a distant second in the console race behind Sony’s PlayStation 4 with more than 75 million. And Nintendo’s Switch console? It’s a runaway success.

In just over a year, Nintendo sold more than 17 million Switch consoles; it’s the fastest-selling console in US history. Nintendo attributes this success primarily to one thing: a lot of really good games you can play only on the Switch.

The Xbox One, by comparison, isn’t doing so great — though on paper it’s competitive with or outright better than the competition from Sony and Nintendo.

Starting at $329, the Xbox One is cheap and jammed with great games to boot. Even the lowest-end model of the Xbox One supports HDR, a high-end video technology that makes games look better on TVs that support it.

It does everything a set-top box like the Apple TV does, like let you watch Netflix. And it plays blockbuster games. In reality, though, it’s the console I’m least likely to suggest.

The PlayStation 4 has many of the same games, like the latest Call of Duty title and a bunch of great exclusive games, including the critically-acclaimed God of War.

Though the Nintendo Switch doesn’t have third-party blockbusters like Call of Duty, it has a big edge in terms of exclusives — there’s no other way to play the latest Super Mario games. That’s a pretty big advantage.

And if you already own a PlayStation 4 or PC? There simply aren’t many major Xbox exclusive games that make the Xbox One worth owning. And this year’s big Xbox One game, Crackdown 3, just got delayed to February 2019. Crackdown 3 has been shown off by Microsoft for several years, but has yet to launch. Image: Microsoft

So what’s Microsoft going to do? That’s the big question.

Here are some ways it could go.

1. Microsoft could buy a game publisher or development studio, which was rumoured earlier this year The latest rumours suggest Microsoft is considering an acquisition of some sort — a game-development studio or publisher that could bolster Microsoft’s stable of intellectual properties.

The companies most recently rumoured as acquisition targets are:

1. EA, the maker of “Madden NFL” and “FIFA,” among many others. 2. Valve, the operator of Steam and the maker of “DOTA 2,” “Half-Life,” and much more. 3. PUBG Corp., the South Korean subsidiary of Bluehole Studio that makes/manages the very popular “PlayerUnknown’s Battlegrounds.”

But does that make any sense?

Michael Pachter, a senior analyst at Wedbush, told us earlier this year that there was “close to zero probability of buying EA.”

There’s a good reason for that, and it’s the same reason that Microsoft’s unlikely to buy most any of the other major game publishers, like Ubisoft, Activision, Take-Two Interactive, or Bethesda Softworks.

EA, like many other major game publishers, has a business dependent on making games for every platform, including Sony’s and Nintendo’s. If Microsoft were to buy one of these publishers, it would be to keep that publisher’s games for the Xbox platform.

That makes any such acquisition a poor business choice. Not only would the publisher cost Microsoft a ton of money up front to buy, but it would be difficult to make money back on the investment when it’s suddenly limited to developing for only Xbox.

“That would lower EA revenues — by a lot, unlikely to be made up by growth on Xbox — and would make a purchase prohibitively expensive,” Pachter said.

2. Microsoft could lean in to its PC business and walk away from consoles altogether The concept is simple: Any game published by Microsoft will come to the Xbox One and Windows 10. You buy it once and get it both places. If you save a game in one place, you can pick up the game where you left off on the other device. It’s pretty sweet!

And it may very well be the future of the Xbox business.

“The next platform might end up being the PC,” Pachter said. “The Xbox Anywhere initiative seems to acknowledge that a Windows 10 PC works fine as a game console.”

That doesn’t mean saying goodbye to Xbox as a platform. It could live on in software form — for instance, as a user-friendly interface on your TV. Maybe Xbox as we know it becomes a component of another device, like an Apple TV or a Roku.

In the short term, Microsoft is unlikely to abandon the Xbox console. But you can perhaps expect Microsoft to shift its focus toward the PC.

“There probably will be a next generation,” Pachter said, “but it is likely to be smaller.” 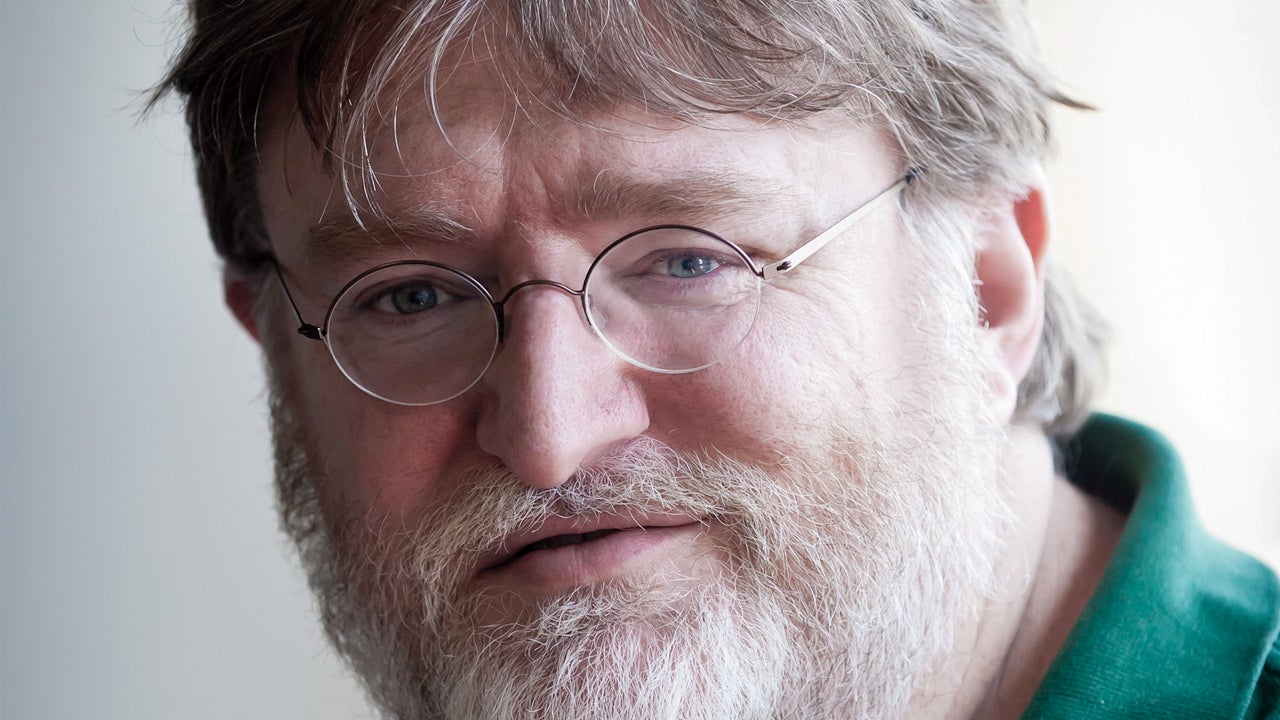 Gabe Newell, the president of Valve, is a former Microsoft employee who left to found Valve Software in the mid-90s. Image: Valve

Steam, Valve’s computer-based storefront and platform for gaming, is huge; somewhere in the ballpark of 200 million people use it every month.

If Microsoft’s looking to the future of Xbox as a computer-based platform that works anywhere, instead of only on a dedicated piece of hardware created by Microsoft, buying Valve would be a way to bolster that initiative.

Not only does Valve have Steam, which brings a huge chunk of new users and has a lucrative storefront, but it also owns a bunch of classic gaming intellectual property. The Half-Life franchise, for instance, could finally see its long-promised third instalment as a big Xbox exclusive.

But Valve is a private company, and there’s no way to know how much it’s worth. Valve takes a 30 per cent cut, on average, of Steam sales, and Steam is the most widely used game store on Earth. Pachter estimated Valve did “around $US2 ($2.63) billion in Steam sales” in 2017.

All of this is to say that Valve could be outrageously expensive to buy, and it’s entirely possible it’s not up for sale.

4. Microsoft comes out with a new Xbox in an attempt to start a new “generation” before Sony Microsoft just released the extremely powerful $649 Xbox One X in late 2017, so I’d call this one the least likely possibility.

That said, Microsoft could very well surprise everyone with an early launch of the successor to the Xbox One.

The Xbox One is coming up on five years since its launch, making that an early sunsetting — game console generations tend to last five to 10 years. It would be an especially surprising move, given the relatively recent launch of a significantly updated Xbox One console in the Xbox One X and what it means for the Xbox platform.

In so many words, the Xbox One X offers a major update to the hardware while retaining compatibility with existing Xbox One games, which look and run better on the Xbox One X but must be playable on the original Xbox One from 2013.

Think of it like smartphones: You expect your old apps to work on your new phone. Microsoft could be moving toward this approach, where the Xbox One is “The Xbox” and new consoles are upgrades. Your game library moves forward with you and that’s that.

It fits in well with the Play Anywhere initiative, but it might be difficult to pull off from a technical perspective. At some point, new games will require newer hardware, which could leave owners of older consoles out in the cold. Xbox Game Pass is a subscription-based service for the Xbox One that offers access to a large library of games from Xbox 360 and Xbox One, but each game must be downloaded before play. Image: Microsoft

Forget about downloading games. Maybe Xbox’s future is being the Netflix of gaming.

Microsoft has been working on a streaming service for gaming “that doesn’t require a console,” Bloomberg described Phil Spencer, an executive vice president, as saying in November 2017.

There’s already a service called Xbox Game Pass that offers a Netflix-like instant library of games on Xbox One, but games must be downloaded individually (not streamed instantly, like Netflix).

The new streaming service is expected to launch some point in the next three years, and it’s entirely possible it won’t require a dedicated piece of hardware made by Microsoft — like, say, an Xbox One — to play games.

Would such a service offer access to a library of games, or would games be sold a la carte? It’s unclear.

None of the few existing services like this — such as PlayStation Now from Sony — have been very successful. PlayStation Now, for instance, has a library mostly of old games. Moreover, streaming services introduce technical problems, like network latency, that can turn gaming into a mess.

These hurdles could no doubt be overcome. But it’s an uphill battle.