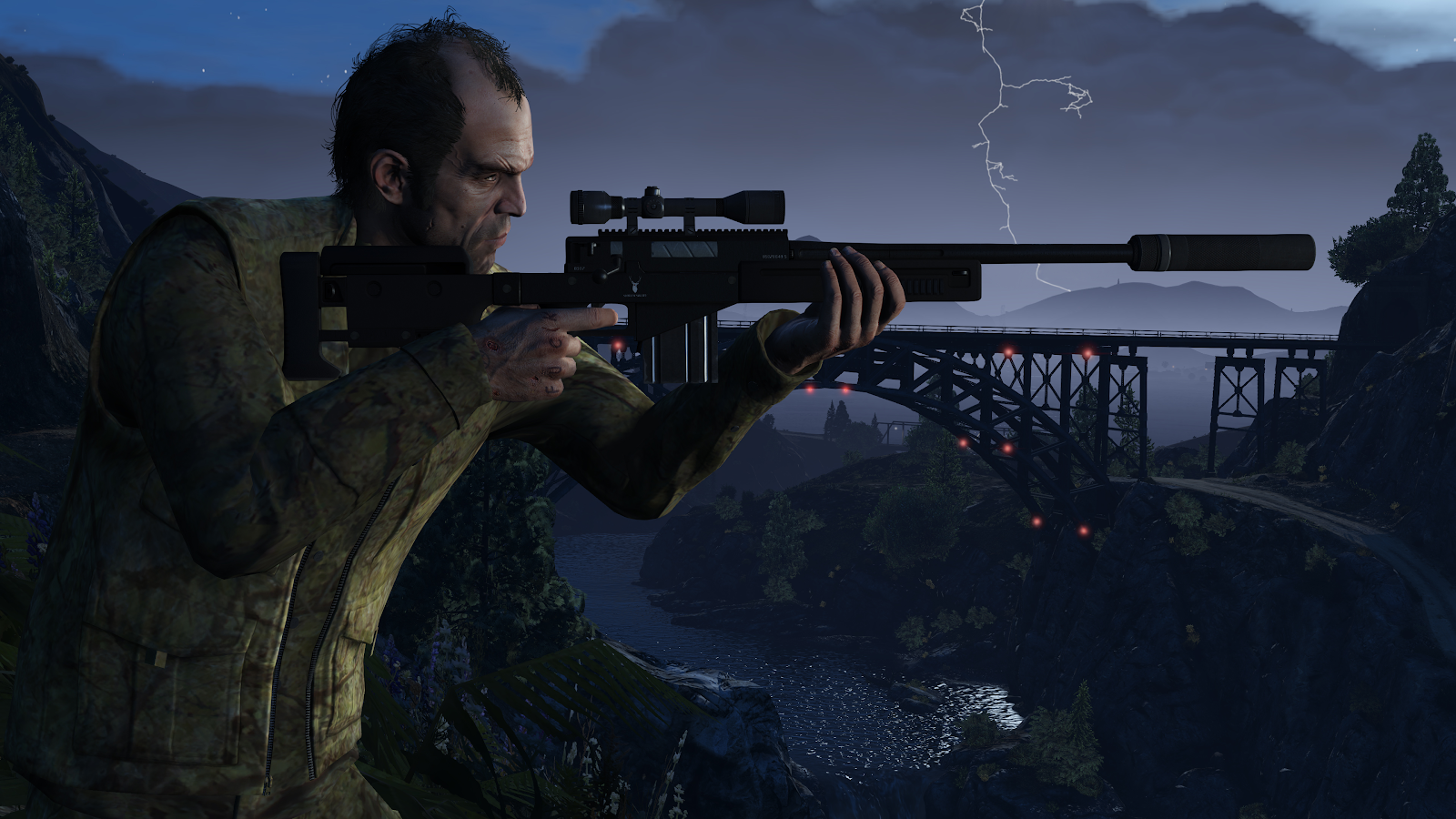 Even without mods, Grand Theft Auto 5 is a violent game. You can run over human beings and animals, shoot people with powerful long range rifles, burn police officers alive with Molotovs, or even beat someone to death with a baseball bat. But some players desire more realistic and sometimes gory details.

GTA 5 modders have stepped up to the challenge. Over the years these fans have created mods for the PC version of GTA 5 that change the way blood looks, the way bullets hit, how NPCs respond to violence, how the player reacts to injuries, and how gore works. Some of these changes and so-called improvements might be disturbing or uncomfortable to others.

"When a bullet enters a body, it's quite a small hole," one YouTuber says while describing a mod he installed that promises more realistic bullet holes. As he is describing what bullet holes look like in real life, he shoots multiple holes into a dead body with an assault rifle. If this wasn't a video game, this would be a video found on Liveleak. 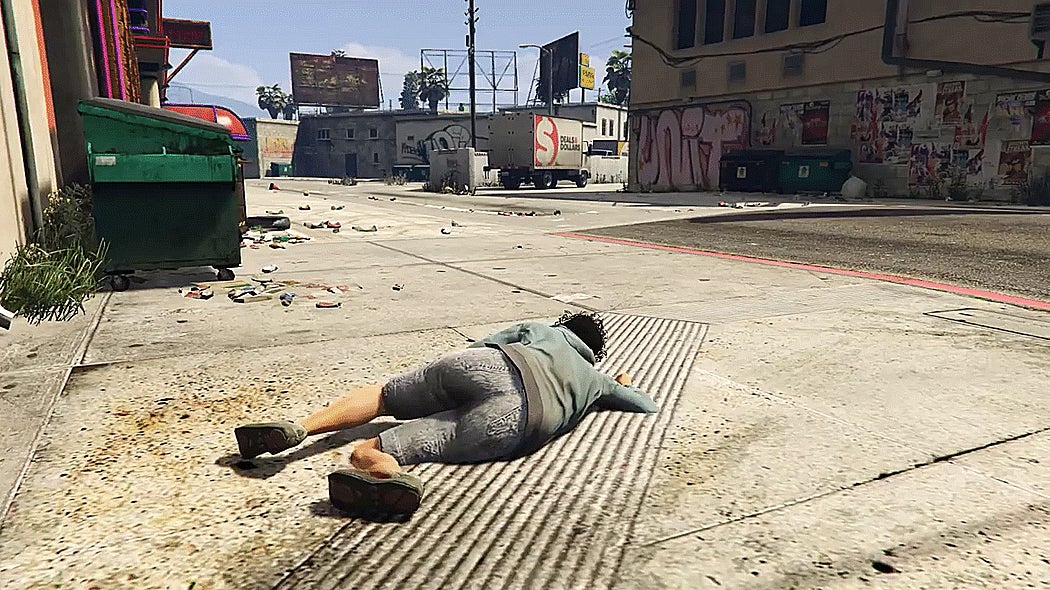 Mods that make GTA 5 more realistic are hugely popular, particularly mods that make the game look more "real" or "life like". But there are other mods that focus on making GTA 5 feel more real in violent ways.

GTA5-Mods.com, a popular site where players upload and download mods, has a huge variety of violence-enhancing mods. There are a dozen or more mods that improve and change blood splatter in the game, with some of these mods receiving 20k to 50k downloads. There are mods such as "Crawl Injury", which make non-player characters, or NPCs, crawl around the ground in pain, something present in another Rockstar game, Red Dead Redemption. Crawl Injury has over 17k downloads.

Another popular mod is GoreV. This mod adds new textures and assets that make gunshots more graphic, with bits of flesh and bone sticking out of an NPC's head after they are shot. GoreV has nearly 35k downloads. There's a mod that makes NPCs cry and scream after being injured, a mod for more realistic blood sprays, and even a mod that adds dismemberment.

These are some of the most downloaded mods on GTA5-mods.com. In fact, one of the most popular mods on the entire site is "Raider's Blood, Violence, Melee & Destruction Overhaul". As the name implies, this mod changes how NPCs react to being shot, hit and burned. It has over 115k downloads, and one fan of the mod liked it so much they actually created a trailer for it on YouTube.

Not every injuries and violence mod is focused on NPCs. Some mods try to make the player character more vulnerable.

A popular mod, which is no longer being worked on by its creator, added concussions and limping. If a player got punched too many times or fell from too high a height, they might become concussed and limp around. Another mod makes bullets more impactful, causing the player to actually fall down when hit.

These player mods seem more frustrating than fun, but with over 10k downloads combined it seems there is a community that wants them.

While most of the comments about these mods on the GTA5-Mods site are related to bugs or compliments on how much a player enjoyed the mod, some comments are a bit more disturbing.

For example, one user wonders: "Is there any way to keep everything in this mod but add my own pools of blood? I like my slaughtered lambs left lying in large pools of blood."

Another user commented on the Raider's Blood, Violence, Melee & Destruction Overhaul mod page about wanting more blood on his character: "When I kill people my character (Franklin) doesn't get covered in their blood like it's supposed to."

Another user on that same mod page commented about how they had seen a murder before and the mod wasn't accurate. "Well first off I've seen murders before. When people get shot and they fall to the ground on the pavement, they don't suddenly get covered in mud m8."

Comments such as these might make you think that the fandom around these mods is filled with sadistic and violent folks. 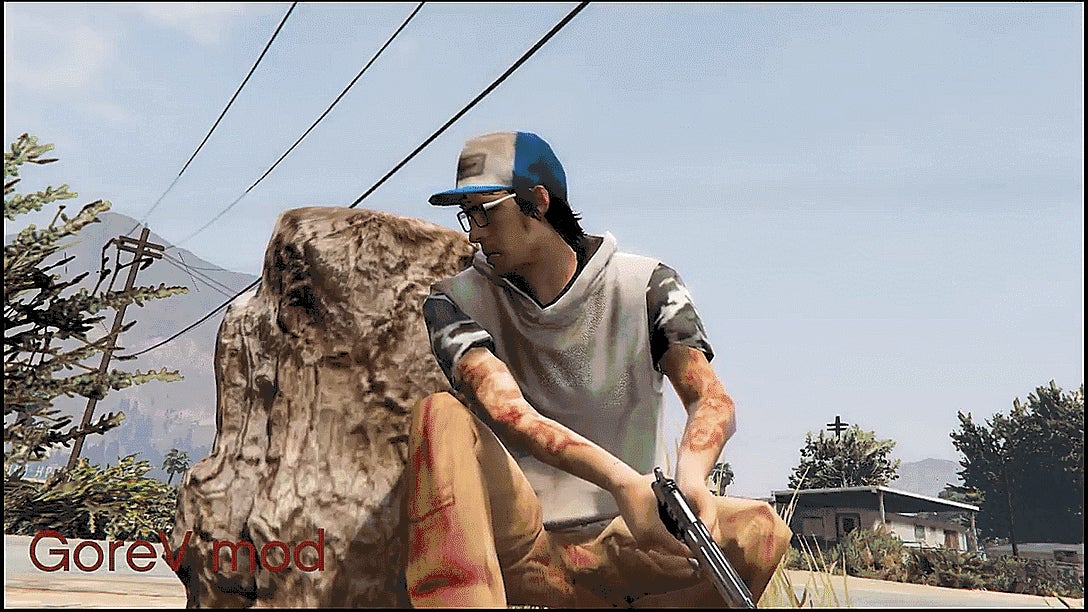 "I think these mods are so popular because people want to play and control GTA 5 in their own realistic way and to break away from the restrictions of the game," a prolific modder who goes by the name JediJosh told me.

He has released over 100 mods, of all sorts. His GTA 5 PC trainer mod - which allows players to do things such as spawn new items, teleport, turn off police and change voices - has over 500k downloads and is the eighth most popular GTA 5 mod on the entire site. JediJosh has also created multiple mods that make the violence and combat in GTA 5 more realistic, and these tend to be some of his most popular and frequently downloaded creations.

JediJosh also explained that for some players GTA 5 has become stale, and mods such as GoreV and Crawl Injury add new little features to freshen up the gameplay. While some players change GTA 5 up using over-the-top mods, not everyone wants to run around as Goku or The Flash.

For some, making the game feel more realistic is how they keep GTA 5 from getting boring. For many fans, these mods are less about sadistic desires and more about trying to shake up an ageing game.

It is true, however, that violent mods can have intense fans. JediJosh explained that he has gotten some strange requests, such as players wanting more realism or graphic imagery. "Even to this day I've been getting requests to make it more 'realistic'." That's the thing: For some players, the realism is never enough.