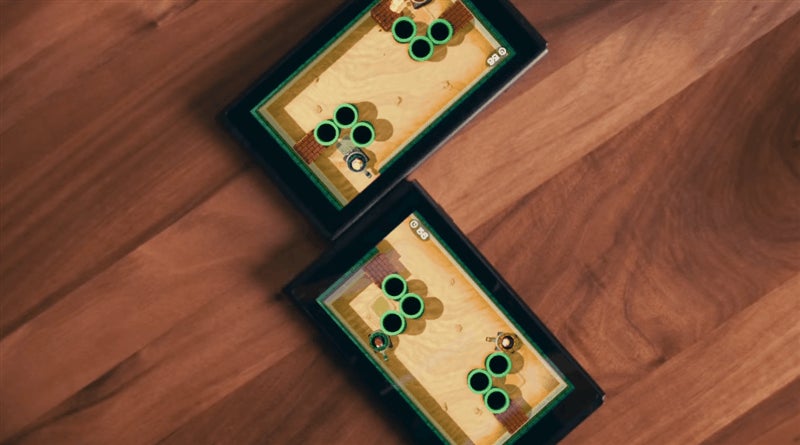 At an E3 where Nintendo and its partners largely played it safe with big Smash Bros. and Pokémon sequels, the company tucked a clever new Switch development in a trailer for a new Mario Party. Blink and you'd miss it: the sight of two Nintendo Switch screens connected into one oddly-shaped game board.

On the last day of E3, I got to see a quick demo of the two-screen technology. I wasn't allowed to play the games myself, but in a meeting room bearing the name of the company's outgoing CEO, I watched the latest Switch concept in action.

Nintendo reps showed off three mini-games that make use of the dual screen.

In the first, a baseball game, allowing up to two players per team, involved propping up a pair of Switches back-to-back to give opposite perspectives of a baseball diamond. One team would pitch and field. The other would get up to bat. This was fine, but not the magic I'd booked the meeting to see.

The other two demos were short but sensational. They each involved using two Switch units' screens as connectable surfaces.

The first demo involved bananas and two Switch screens. Each screen shows halves of some bananas or banana bunches, each half bleeding off the edge of the system like the edge of a puzzle piece. The player needs to move the screens around on a table until two of the halves are lined up to make a whole, then swipe their finger through it to confirm the connection. (The game was also demoed during Nintendo's Treehouse Live show and can be viewed 16 minutes into this clip.)

The game was timed, and the player has to think quickly. After each successful connection, the screens display more complex banana arrangements, necessitating more fiddling with those Switch screens to line them up the right way.

The second multi-screen game, also from Super Mario Party, involves multiplayer tank combat. Each screen's battlefield consists of a 5x9 grid, and the screens can be joined in any way that retains some of the seams of that grid.

Once the player lines up the screens at any right or straight angle, they swipe their finger to make the connection. The screens reconfigure themselves to ensure there's an open and contiguous battlefield across both devices. At that point, players can start driving their tanks into battle from one screen to the next.

Nintendo wouldn't let me try the games, nor talk to me about how they work. Watching the games in action, I gather that the systems may be linked wirelessly but don't actually communicate their position. The act of drawing one's finger from one screen to the other appears to be the main (and possibly the only) way that the screens extrapolate their relative positions.

Figuring out how the magic trick is done would make it a shade less exciting, but I'm still enamoured with what Nintendo's done here. I could be wrong, after all. And I wouldn't put it past Nintendo to come up with wilder, even better ideas for games that use this concept. How about a double-wide view for a new co-op side-scroller?