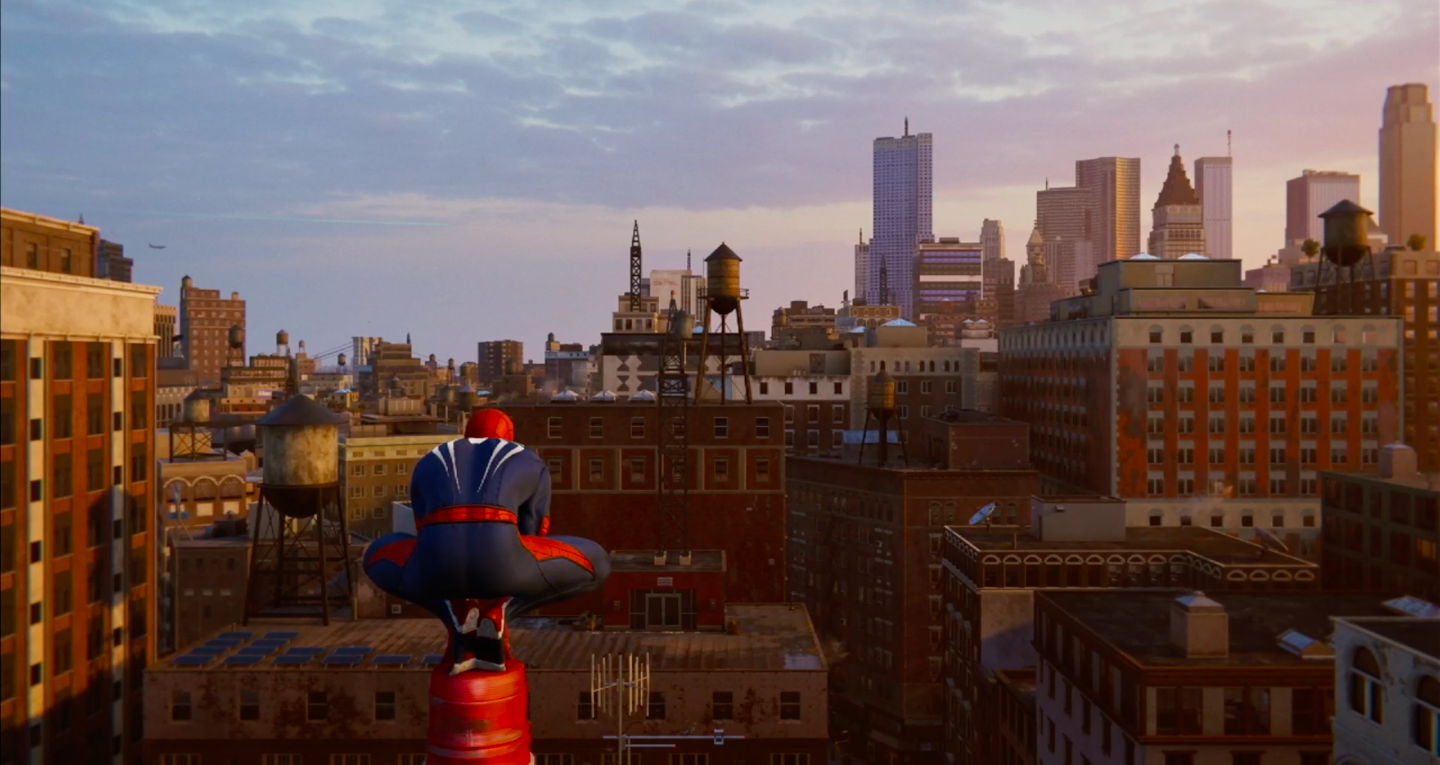 The New York Insomniac created for Spider-Man is just about everything I've hoped for since the 2001 Sam Raimi movie with Tobey Maguire. The buildings are all very tall, divided between glass skyscrapers and old brick high rises. In between, there are alleyways bathed in the warm glow of a setting sun that never seems to actually go down, at least during the demo after Sony's E3 press event.

It's as though a group of developers looked at the poster for the 2001 movie and decided to make a whole city out of it.

The biggest challenge for anyone making a Spider-Man game is nailing how web slinging works. Treyarch's run of Spider-Man games in the early aughts did a decent job at the time. The developer created a handful of games, including 2005's Ultimate Spider-Man, where running off a rooftop and webbing to the nearest street light felt good enough to make up for the otherwise boring New York sandbox.

I'm not convinced that Insomniac's open world will be able to hold a candle to its contemporaries such as Grand Theft Auto 5 or The Witcher 3. Occasionally I high-fived some strangers on the street or broke up a robbery in progress, but I didn't have much opportunity to interact outside of set missions.

What Spider-Man does for web slinging as Spidey, however, really does feel like something special, on the level of what Rocksteady Studios did for melee combat with the Arkham series.

As I swung from one building to another down Broadway, little icons for points I could web to constantly popped on and off the screen. At first it seemed like I was supposed to be picking out the individual ones I wanted by trying to centre them in my camera and then shoot a web, but movement quickly became more intuitive and less cerebral.

Within minutes, I could more or less feel my way down a street or over the top of a smaller building because of how much work the game seemed to be doing behind the scenes to anticipate where I was trying to go.

The R2 button would shoot a longer web that Spider-Man would then hold onto and use to build up momentum through a long, arched swing. The X button shot shorter, more direct webs at nearby points to simply propel me along at the same relative height.

There's also web-ziplining and a manoeuvre where Spider-Man shoots dual webs to lock onto a fixed point - say, the top of the Empire State building - and then pull himself up on top of it. But the short and long webs appeared to be the main tools for traversing the section of midtown I was confined to. 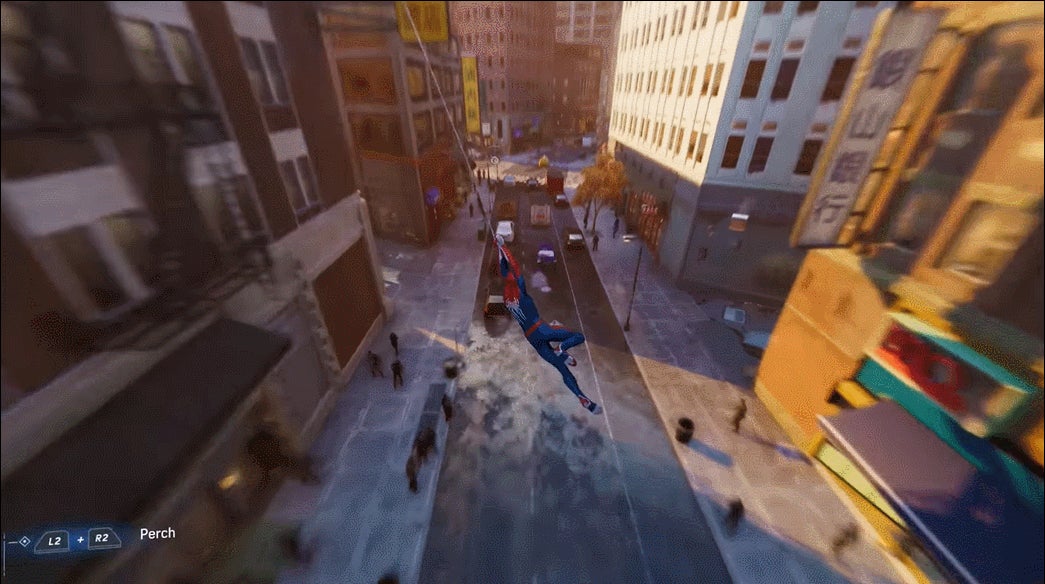 It felt simple and elegant, with the game doing most of the work of figuring out what I wanted to do based off only a few inputs. The ability to throw my weight slightly to the right or left during the fall or rise of a web-swing helped me feel in control despite how uninvolved in most of the work I actually was.

Like getting into the swing of Arkham's freeflow combat, where button mashing becomes a detriment and it only takes a few presses and slight nudges to the analogue stick to channel a kick or counter-punch, less felt like more when gliding from 20th Street to 30th in just a few seconds.

There was only one place the illusion of being Spider-Man broke down, and that was in what happens with all that web-slinging momentum when it crashes against an immovable object, such as a steel beam on a construction site or a taxi on the street.

The answer is: Nothing. Instead of colliding with the side of a building during a poorly-chosen swing, Spider-Man immediately goes into a run alongside it. Instead of crashing through the top of a car while plummeting in free fall toward the pavement, Spider-Man's momentum dissipates violently a moment before making contact.

It's an understandable concession given how punishing sloppy web-slinging could otherwise turn out to be, but it occasionally shatters the believability of a system that other times was incredibly good at convincing me I was undergoing the same torrent of g-forces as the superhero I was controlling on screen.

There was no capture allowed at our demo, but it loosely followed Sony's E3 gameplay demo trailer above.

Combat in the game was fun, but less impressive than the movement. Spider-Man can punch, dodge and shoot webs at various objects in the vicinity to swing them around at enemies and bring them crashing down over their heads.

The one boss fight I played was against Shocker (who was robbing a bank, because that's something supervillains still do in comic books), and it mainly consisted of dodging his attacks until an opening appeared for me to smash him with some nearby rubble. It felt staged, and a stark departure from the free flow of the rest of the demo.

Hopefully isn't representative of the rest of the game's boss encounters, which, based on yesterday's trailer, there appear to be a ton of.

Spider-Man also has a small arsenal of gadgets and an ultimate he can unleash after filling up a combo meter that sprayed web at everyone in the vicinity, doing some damage and temporary restraining them.

Neither of these moves really changed up the rhythm I immediately fell into of webbing people in the face, pulling myself toward them, punching them a few times, and then dodging overhead or through their legs before the next person was able to attack me.

Pulling in random objects such as oil drums and piles of rebar to swing around was fun and useful, as was being able to fling grenades back at nearby mobs, but none of it felt quite as good as just travelling around.

I was always eager to dispatch whatever goons I was fighting in order to get back to flying through the streets of New York. The city felt huge, with Skyrim or Breath of the Wild-type moments of seeing something tall off in the distance and wanting to go and check it out.

Insomniac's Spider-Man certainly doesn't look anywhere near as big as Skyrim, but in my short time with it it did at times hint toward a similar sense of exploration. And besides, Skyrim didn't have Spider-Man.