PlayStation-Inspired Arcade Game Is Scarier Than It Looks 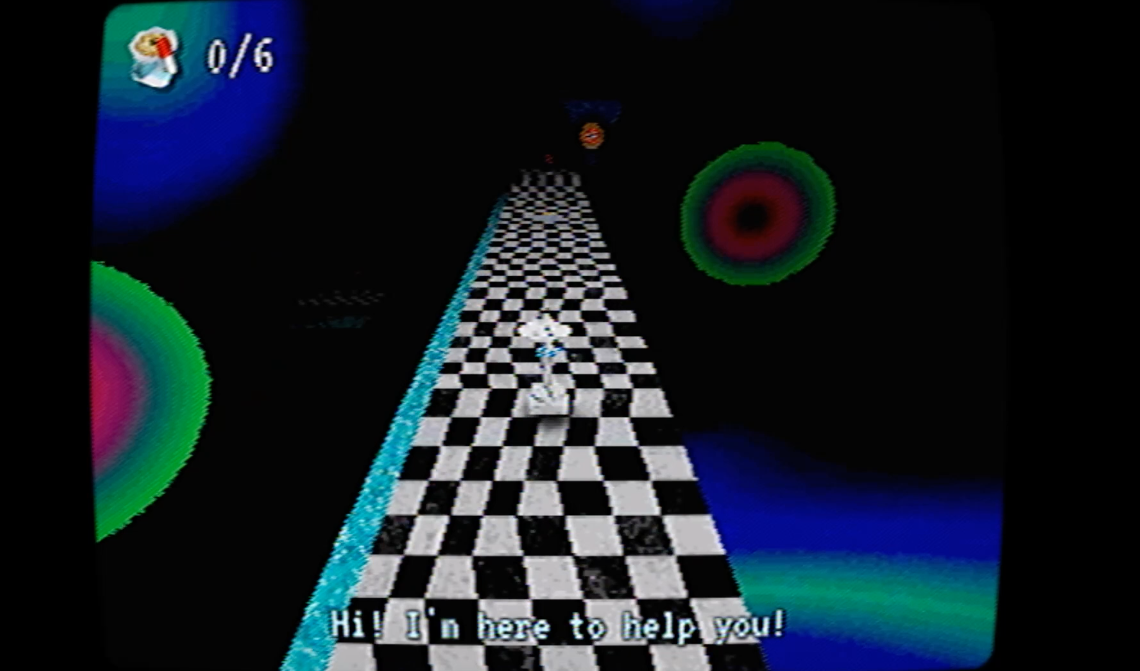 OK/NORMAL is an experimental arcade game by Toni Koretelahti that embraces the visuals of early PlayStation games. The game, which captures the strange and abstract worlds of mid-90s 3D, is one of several new indie titles that embrace a new form of “retro” aesthetics. It’s an oppressive, bizarre, and overwhelming game whose glitch spaces are so tangled, I thought I would never escape.

In OK/NORMAL, the player takes control of a small statue navigating floating mazes to collect food and medicine. These strange spaces, with their check-board patterns and hazy CRT-inspired noise, recall early 3D experiments like LSD: Dream Emulator and Jumping Flash. Gaming’s shift from 2D into the blocky and incomplete worlds of the Nintendo 64 and PlayStation was defined by a certain roughness. Hard-edged polygons and indulgent mazes were common as developers tested the waters of the third dimension.

OK/NORMAL finds itself at the forefront of a burgeoning aesthetic movement that includes games like Sean Han Tani’s All Our Asias, the work of Arcane Kids, and the horror title Paratopic.

These games don’t reach back to the Super Nintendo for inspiration but draw from the experimental spaces of the fifth console generation. In the case of OK/NORMAL, the arcade-inspired world spreads outwards until it tears.

As the game continues, things begin to break. Glitches tear at the edge of the screen, your friendly companion derides you, and levels repeat. OK/NORMAL is a cruel game with a disdain for the player that is both admirable and genuinely difficult to endure. Levels morph into twisted red mazes full of screaming faces and floating skulls.

I wandered for 20 minutes only to run into monsters that sent me back to the start of the level. Furious static and seemingly endless mazes locked me in a sensory nightmare. We’ve seen Hell in games, fighting monsters in Doom or Devil May Cry, but OK/NORMAL is the first time I played something that felt like Hell.

I was lost, frustrated, and isolated. Anxiety flamed at me until my breathing was heavy and forced. Finishing the game felt impossible. I’ve only ever left two games unfinished in my life due to frustration. OK/NORMAL threatened to become the third. Its mazes and monsters were too oppressive, dragging me deeper and deeper into what can only be described as a digital nightmare.

That might sound horrible. It certainly felt horrible to play at times, but the fear and panic that I felt came as a result of an intentional combination of strange visuals and clever level design. Games can makes us feel a spectrum of things. We play them to have fun, but we also play them to be scared, to feel smart, to learn, to fail, and more. In his piece “Fun is a Four Letter Word,” Deus Ex designer Warren Spector examined how art, including games, are not always meant to be purely joyous and fun affairs:

“That’s valuable. A story that wasn’t fun to watch, that wasn’t pleasurable in and of itself, but was clearly “troubling,” “disturbing,” “annoying,” “over the top,” “ambiguous” … All things that mature media, for mature people, allow and encourage. I mean, it’s not as if reading James Joyce or Thomas Pynchon is “fun” (come on, admit it).

No one goes to a John Cage concert because it’s going to put a big ol’ smile on their face. And A History of Violence was a lot like being in a room with someone you just wanted to scream at but couldn’t.”

I did not have fun playing OK/NORMAL and often felt it was too mean of a game. But there’s value in that. It succeeds as an experiment, dragging the player into a deathbed dream of torment and despair wrapped in the abstract aesthetics of gaming’s boldest and clumsiest 3D worlds. It might not be for everyone, but it was a powerful experience that I’m glad I played.